A Potential Game Changer for Pets with Diabetes 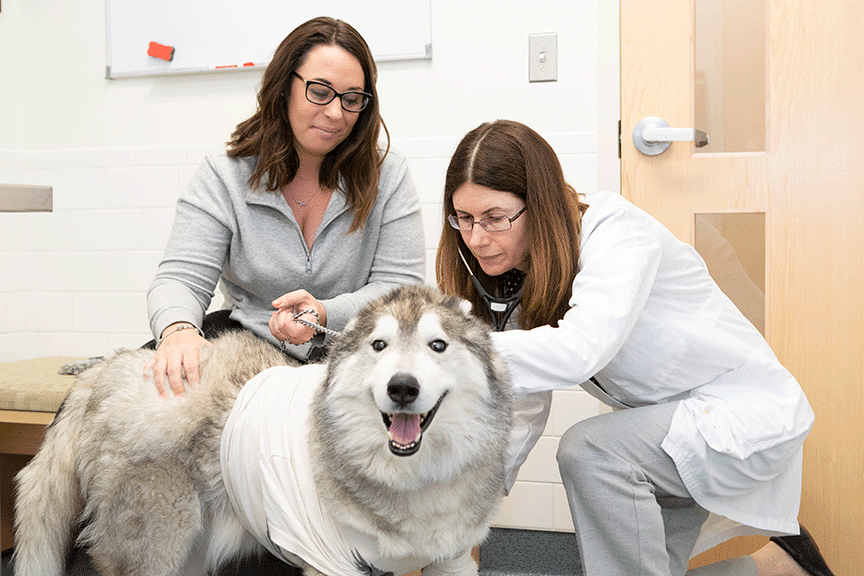 Olaf being examined by veterinarian Orla Mahony, as Olaf’s owner Gina Dacey looks on. “Having a diabetic pet is a big commitment for any owner, and it’s not doable for everyone,” said Mahony. Photo: Matt Wright

When Olaf, a four-year-old Siberian husky, was diagnosed with diabetes in February, there wasn’t anything his owners, Gina and Brian Dacey, wouldn’t do to help him. “We’ve had him since he was a few weeks old, and he’s really still just a baby,” Gina Dacey said.

Pets with diabetes cannot properly use glucose—a type of sugar found in the blood and the main source of energy for all the body’s cells. Glucose levels are primarily controlled by a hormone called insulin, which in pets with diabetes is either not produced or is insufficient for healthy living. Diabetic animals, just like many humans with the condition, must receive carefully timed daily injections of insulin to avoid developing life-threatening complications from their disease.

Already juggling the schedules of two small children and work, the couple rearranged their life to ensure someone would always be home to give Olaf his twice-daily insulin injections. “It’s definitely been a lifestyle change and learning curve for all of us—especially Olaf, who’s used to getting treats from his human sister,” Dacey said. “Now my three-year-old daughter will tell him, ‘You can’t have a treat, because you have diabetes and we have to watch your blood sugar.’”

However, despite the family’s best efforts, Olaf’s blood-sugar levels proved difficult to normalize, and the husky developed cataracts, a complication of his uncontrolled disease. “On Easter, I called his veterinarian sobbing because we noticed he was having trouble seeing,” Dacey recalled. “I didn’t know what to do, because everything we had tried—insulin adjustments, longer and more frequent exercising—wasn’t helping enough.”

Her veterinarian suggested that a longer-acting insulin might offer better blood-sugar control. While Dacey was researching options—learning that these products for humans can be purchased for pets—she stumbled across a free clinical trial of a new ultra-long-lasting insulin for dogs. For the study at Cummings Veterinary Medical Center, veterinarian Orla Mahony is investigating whether a new insulin can control glucose levels in dogs using a single weekly injection.

Although diabetes is already usually very treatable in companion animals, “having a diabetic pet is a big commitment for any owner, and it’s not doable for everyone,” explained Mahony, a board-certified small-animal internist who specializes in endocrinology. “Diabetic pets typically require an insulin injection twice daily, and those injections are timed—they are not just given whenever you happen to be at home. That has an enormous impact on pet owners, who can no longer work late or sleep in on the weekends. For people who need to travel a lot for work, it can be an especially huge issue.”

The new insulin “is potentially a game changer,” said Mahony, a clinical assistant professor at Cummings School. “If it’s successful, owners could give their pets an injection just once a week, removing the need to be home at the same time every day,” she said. “And although the majority of pets take their shots without a bother, some pets really fight them, so reducing the number of injections would improve quality of life for these animals and their owners. We also think that using an ultra-long acting insulin will lead to better control of pets’ diabetes.”

In the Cummings School study, dogs with stable diabetes that are otherwise healthy receive four weekly injections of the new insulin, administered at the Foster Hospital. If it’s effective in their pet, owners then will have the option of continuing to use the insulin at home for a year after the trial ends.

In addition to this clinical trial, which is part of a multi-institutional study that includes UC Davis School of Veterinary Medicine, Mahony is working to launch a trial of a weekly insulin injection designed for cats. Both insulins were created by a Massachusetts biopharmaceutical company that develops products for human and veterinary medicine. Currently, long-lasting insulins are available in human medicine, but the injections only control blood-sugar levels for two or three days, according to Mahony.

After reading about the Tufts clinical trial, Dacey applied to enroll Olaf, and soon after the husky received the ultra-long-lasting insulin as the first case in the study. Dacey said Olaf is doing much better on the new treatment. “His personality has improved,” she said. “He has so much more energy that we went out for a run this morning—something that wasn’t possible when his sugars were not well controlled.”

To learn more about participating in the diabetes clinical trials at Cummings School of Veterinary Medicine, email [email protected]

This article was reprinted from now.tufts.edu with permission from Taraneh Pettinato, Associate Director of Media Relations, Cummings School of Veterinary Medicine at Tufts University.