From the asymptomatic dog with a few heartworms to the patient with advanced heartworm infection and caval syndrome, heartworm disease (HWD) presents a range of treatment challenges. The keys to implementing therapeutic protocols recommended by the American Heartworm Society (AHS) include understanding the disease and the role different medications play in treatment.

A thorough understanding of the host–parasite relationship is necessary to effectively manage canine heartworm cases.

Role of Activity Level
As expected, the number of worms affects the severity of disease, but of equal, if not greater importance, is the activity level of the dog. A controlled study demonstrated that exercise- restricted dogs infected with 50 heartworms by surgical transplantation took longer to develop clinical disease and developed less severe pulmonary vascular pathology than dogs with 14 heartworms that were allowed moderate activity.

This is also evident in naturally infected dogs in which no correlation between the number of heartworms and pulmonary vascular resistance exists, which is an indication that the host–parasite interaction plays a significant role in the severity of disease.1 A subsequent study reported similar findings in dogs being treated with melarsomine.2

Whereas live heartworms can cause endarteritis and arteriolar muscular hypertrophy of primarily the caudal pulmonary arteries, the majority of pathology seen in acute clinical disease is caused by dying heartworms.

As worms die of either natural causes or because of administration of adulticidal drugs, they decompose, causing small worm fragments to lodge in the distal pulmonary arterioles and capillary beds. These worm fragments, along with inflammation and platelet aggregation, result in thromboemboli that block blood flow, particularly in the caudal lung lobes.

During periods of increased activity or exercise, the increased blood flow to these blocked vessels can cause capillary delamination, rupture, and subsequent fibrosis and, ultimately, further increases pulmonary vascular resistance, contributing to development of right-sided heart failure.3 This illustrates again the direct correlation between a dog’s activity level and severity of disease and its importance when determining how to treat the heartworm-positive dog.

The ultimate goal in heartworm treatment is elimination of all adult heartworms with minimal posttreatment complications. The necessary steps in accomplishing this goal include:

Melarsomine is the only approved adulticidal drug available for treating adult heartworms in dogs. It is important to note that melarsomine was originally tested against worms at least 4 months old, and there are limited data about its effects on younger worms.4

Melarsomine administration is based on class of HWD (Table 1). The 2-injection protocol listed on the melarsomine product insert treats classes 1 and 2 HWD but kills only 90% of adult worms, while the 3-dose alternate protocol that treats class 3 HWD kills 98% of worms (Table 2). The AHS recommends the 3-dose protocol in all heartworm cases, regardless of class, owing to increased efficacy and safety. 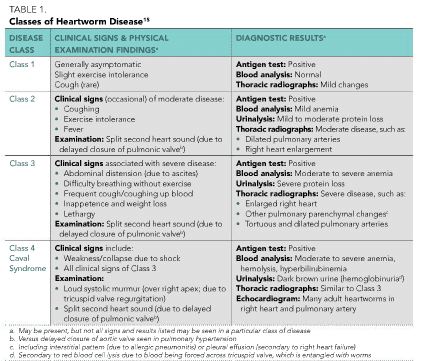 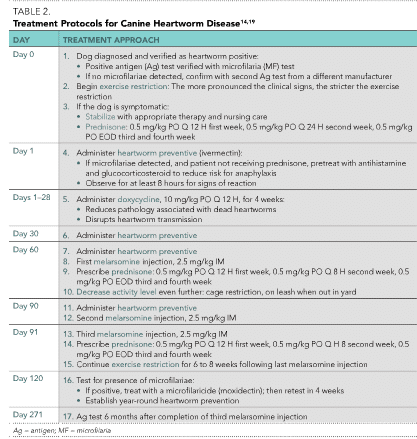 When treating a heartworm-positive dog, the dog may be harboring heartworms at different stages of development—from larvae < 1 month of age to adults > 5 years of age. The goal of eliminating all worms in a patient presents a treatment challenge because of limited knowledge about the effects of melarsomine against heartworms < 4 months of age.

Macrocyclic lactones administered as microfilaricides may cause a rapid decrease in the number of microfilariae and, therefore, should be used with caution in dogs with high microfilarial counts. In these patients, pretreatment with antihistamines and glucocorticosteroids is advisable to minimize potential reactions.

Administration of a macrocyclic lactone should begin as soon as a dog is diagnosed with a heartworm infection. Including doxycycline in the treatment protocol hastens the elimination of microfilariae, and current protocols that use doxycycline in combination with regular preventive doses of macrocyclic lactones have essentially eliminated the need for postadulticidal elimination of microfilariae.

Topical moxidectin is approved by the FDA to eliminate microfilariae. No adverse reactions due to high microfilaria counts were observed in laboratory or field studies conducted for approval of this label claim.

Dirofilaria immitis is one of 14 filarial nematodes that harbor a species of Wolbachia (pippens), a rickettsial intracellular endosymbiont. Wolbachia are necessary for these filarial nematodes to reproduce and thrive. Additionally, they produce metabolites shown to contribute to the HWD process.6,7

Doxycycline is used to treat several human filarial diseases and has been the subject of several canine heartworm therapy studies.8-11 Doxycycline administered at 10 mg/kg PO Q 12 H for 4 weeks has been shown to reduce or eliminate Wolbachia organisms for up to 12 months.12

Studies have shown that administration of doxycycline in combination with ivermectin:

Anecdotal reports on other macrocyclic lactones with adulticidal properties suggest similar results, but no confirmatory studies have been published.

Alternatives. With the recent reduced availability and/or high cost of doxycycline, questions have been posed about use of alternative antibiotics. The AHS guidelines state, “Minocycline has been shown to be highly effective in eliminating Wolbachia organisms from the filarial nematode Onchocerca gutturosa. Although no published studies have been conducted in D immitis, available pharmacological data suggest that this is a viable alternative if doxycycline is not available. The dosing regimen is the same as doxycycline.”14

Prednisone
Pulmonary thromboemboli are an unavoidable sequela of any adult heartworm treatment protocol, and they are primarily worm fragments complicated by inflammation rather than the actual clots seen in pulmonary thromboembolism in humans. Prednisone has been shown to reduce parenchymal and arterial wall pathology.13 While it has been suggested that glucocorticosteroids reduced the adulticide effect of thiacetarsamide,16 no such phenomenon has been observed with melarsomine.17 Prednisone is recommended following administration of melarsomine in all dogs unless contraindicated because of concurrent medical conditions.

The use of aspirin for its antithrombotic effect or to reduce pulmonary arteritis is no longer recommended as convincing evidence of clinical benefits is lacking.18

Table 2 outlines treatment protocols that were adopted by the AHS. These protocols are appropriate for dogs with Classes 1 through 3 HWD.

A retrospective study comparing the protocol in Table 2 with a similar protocol without doxycycline showed a decrease in respiratory complications and mortality rates when doxycycline was included.20

Surgical Therapy
Surgical removal of heartworms is the only course of action available for dogs with Class 4 HWD. It has also been advocated for severe class 3 cases that need immediate intervention or have hepatic or renal disease of sufficient severity that arsenical therapy is not advisable. See Step-Wise Approach: Surgical Extraction of Heartworms.

Because these patients are extremely ill and cannot tolerate anesthesia very well, several alternative protocols to gas anesthesia have been developed:

Slow Kill. In some situations, arsenical- based treatment protocols are not feasible because of pre-existing medical conditions or financial constraints. As a result, it has become common practice to place heartworm-positive dogs on long-term preventives to prevent new infections and slowly kill adult worms over several years (“slow kill”).

However, the misconception exists that this is a safer form of therapy. Published studies that first explored this form of therapy were performed on laboratory- bred dogs that were kept confined in kennels during the 2-year study period.5 Given the critical role of activity level in disease severity and post treatment complications, it is unrealistic to expect similar results in animals that are allowed to undergo normal activity. In fact, a study with client-owned dogs undergoing “slow kill” treatment demonstrated disease progression in 30% of patients.22

Slow Kill & Resistance. Past studies have shown that microfilaremic heartworm-infected dogs placed on preventive doses of macrocyclic lactones remain microfilaremic for up to 10 months,23 and concern was expressed that this practice could select for microfilariae that are resistant to macrocyclic lactones.5,24 Awareness of this issue was heightened by the marked increase in lack-of-efficacy claims arising from the Mississippi River Valley, and this concern has now been validated by laboratory studies.25,26

Microfilariae-based assays as well as in vivo studies have shown that every macrocyclic lactone currently used in commercially prepared preventives has exhibited some degree of failure.27-29 The AHS has concluded that macrocyclic lactones should never be used as stand-alone therapy to treat adult heartworms.

Alternatives to Slow Kill. For patients in which arsenicals are contraindicated, or if the animal’s overall condition makes standard adulticidal therapy impractical, use of a monthly ivermectin-based heartworm preventive, along with doxycycline, can be considered. McCall and colleagues previously reported that ivermectin and doxycycline administered periodically over 36 weeks resulted in a 78% reduction in adult worm numbers.8 More recent studies have shown that a single course of doxycycline administered at 10 mg/kg for 30 days is sufficient and need not be repeated for at least a year.12

Although microfilaria exposed to doxycycline and then ingested by mosquitoes develop to the L3 stage, this stage is not infective, minimizing the risk for selecting for resistant strains.12 Administering doxycycline at 10 mg/kg Q 12 H for a 4-week period eliminates most Wolbachia organisms and stops repopulation; it is currently recommended to repeat doxycycline therapy once annually until 2 consecutive negative antigen tests are obtained 6 months apart.14

Herbal Therapies. No natural or herbal therapy has been shown to be a safe and effective treatment for HWD.

While treating HWD in dogs presents a number of challenges, following a protocol designed to eliminate adult heartworms while mitigating complications from worm death can greatly improve the patient’s chances of a positive outcome.

Charles Thomas Nelson, DVM, is the surgical director of the Animal Medical Center, Anniston, Alabama. He is a past president of the American Heartworm Society, former board member of the Companion Animal Parasite Council (CAPC), a member of the International Feline Heartworm Council, and the spokesperson for the KNOW Heartworms Campaign—a joint educational program developed by the AHS and American Association of Feline Practitioners. Dr. Nelson is involved in heartworm research and lead author of the recently released AHS guidelines. He has authored or coauthored numerous papers and contributed to several textbooks on heart- worm disease, including a chapter in the latest edition of Greene’s Infectious Diseases of the Dog and Cat.