Fear of thunderstorms, fireworks, loud noises, gunshots, and vacuum cleaners is a common behavioral problem of companion animals. Between 17% and 49% of dogs experience an aversion to noise,1 and the resulting stress, anxiety, and exhibited behaviors may negatively affect animal health, life span, welfare, and the human–animal bond.

Current treatment interventions involve behavioral and environmental modification and, when necessary, psychotropic medications or natural products. Pharmacotherapy has historically been limited to sedatives and tranquilizers, such as benzodiazepines and acepromazine. More efficacious anxiolytic medications are currently available, such as tricyclic antidepressants, selective serotonin reuptake inhibitors, alpha-2 agonists, and serotonin 2A antagonist/reuptake inhibitors.

However, owners often seek alternative treatment modalities for behavioral problems because they perceive natural products as being safer and having a lower risk for side effects, despite the lack of comparison studies. The recent literature aims to determine efficacy of natural therapeutic options, such as nutraceuticals and pheromones, as well as to identify risk factors for behavioral problems.

We hope that this information helps clinicians recognize passive and active behavioral signs of fear and the importance of preventing further sensitization by initiating a treatment plan without delay as soon as early signs of fear are detected.

Storengen and Lingaas examined correlations between noise fears and influence of breed, age, and sex by using web-based owner questionnaires. These results may help clinicians identify patients at risk for noise fear and provide an opportunity to discuss intervention strategies with owners.

Landsberg, Mougeout, and colleagues tested the efficacy of a novel gamma-aminobutyric acid (GABA)-ergic hydrolysate fish derivative on noise-induced fear in a laboratory model. The product may help decrease sensitization by reducing cortisol response and may help decrease active fear behaviors.

Tiira and Loh investigated the effects of early life experiences on fears and anxieties by using a validated survey. Sex, reproductive status, exercise, and off-leash exercise may have a significant effect on anxiety and fear.

Thunderstorms are complex stimuli accompanied by changes in barometric pressure and characterized by variable intensities and frequencies of thunder, lightning, wind, and rain. This blinded, longitudinal, placebo-controlled study evaluated the effect of dog-appeasing pheromone (DAP) collars on noise-induced fear and anxiety in a laboratory model of beagles by using an audio thunderstorm simulation.

Twenty-four beagle dogs, age 7 to 12 years, naive to thunderstorm testing and with no history of noise phobia, were included in this study. Over 10 study days, the dogs were individually exposed to a baseline thunderstorm test (test 0; TT0). Then they were equally divided into a control or DAP collar group and well matched for age, sex, and global fear and anxiety scores at TT0.

A hide box was provided during each thunderstorm exposure, and frequency of entrance was recorded. Efficacy was determined on the basis of mean differences of active, passive, and global fear and anxiety scores between PrTh and Th, and between PrTh and PoTh, using a repeated-measures analysis.

Dogs in the DAP treatment group exhibited decreased active behavioral responses associated with fear and anxiety. In addition, dogs in the treatment group frequented the hide box significantly more than the control group, which suggests an adaptive coping mechanism. However, this finding should be studied further. This study indicates that DAP may reduce active signs of anxiety when used as an adjunctive treatment.

L-theanine, an amino acid found in green tea, increases GABA, serotonin, and dopamine levels in the brain. This study tested whether intervention with a nutraceutical containing L-theanine (Anxitane) safely and effectively relieved signs of anxiety for client-owned, storm-sensitive dogs.

Owners completed a questionnaire for 6 storms. After the initial storm, owners began administering the test product for at least 4 weeks or 5 storms. For each storm, owners rated 13 behavioral manifestations and storm severity on a 0 to 5 Likert scale. After each storm, owners evaluated the time it took the dog to return to normal behavior. In addition, owners assigned the dog a global storm sensitivity score on a 0 to 5 Likert scale before and after the trial. At the end of the trial, owners assessed improvement of behavioral signs, overall satisfaction with the product, and likelihood of using the product in the future.

Behavioral signs from the initial and fifth storm were compared individually to determine success by using a simple ratio; success was improvement in the individual behavior score after the fifth storm. A sign test was used to evaluate the significance between the initial and exit global storm sensitivity scores, as well as the time for a dog to return to baseline behavior by comparing the initial and final storms.

Treatment effects were calculated by using a 2-sided test after dichotomizing the data into success or failure; success was indicated when 50% of the behavioral manifestations reported for the initial storm improved by at least 1 rating and none of the behavioral manifestations worsened. A paired t-test assessed the summed behavior scores from the baseline to final storm by using a global correction score to determine effects of storm severity. Univariate analysis of end-of-study outcomes determined owners’ assessment of overall improvement, satisfaction, and likelihood of continuing the product.

Daily L-theanine reduced owner-reported intensity of common behavioral signs of anxiety during naturally occurring storms. Owner satisfaction was high, but the authors warn that the placebo effect is a limitation of this study.

Noise Sensitivity in 17 Dog Breeds: Prevalence, Breed Risk and Correlation with Fear in Other Situations

Age, breed, traumatic experiences, and social transmission (eg, behavior learned from other dogs) may contribute to noise aversion in dogs. This study described the distribution of noise sensitivity in 17 dog breeds and investigated the influence of sex, age, neuter status, and comorbidity of fear responses.

Members from 17 breed clubs voluntarily completed a web-based survey regarding their dogs’ general health and behavior. Owners rated signs of fear toward loud noises/gunshots, fireworks, thunderstorms, and traffic on a scale of 1 to 5. Dogs were determined to be fearful if they had a minimum score of 4 in at least 1 category. The sum of scores across all 4 categories was used for the fearfulness score. Using the same 1 to 5 scale, owners also reported signs of separation anxiety and fear in novel situations and how quickly their dogs calmed after a stressful event.

Analysis of variance (ANOVA) was performed to determine the effect of breed on each of the 4 noise aversions, followed by a Tukey post hoc test. An ordinal logistic regression model measured the association between noise sensitivity (dependent variable), breed, sex, and age. Co-occurrence was evaluated among the 4 noise aversions with a Spearman correlation test; co-occurrence between noise aversion and fear responses in other situations was evaluated with odds ratios.

Breed, sex, neuter status, and age influence noise fear, which may aid in screening at-risk patients. Limitations of this study included the narrow focus of noise aversions, absence of information on specific behavioral responses, and questions about interpretation of the impact of neutering given the breeding population studied, all of which warrant further investigation.

Assessment of Noise-Induced Fear and Anxiety in Dogs: Modification by a Novel Fish Hydrolysate Supplemented Diet

Treatment of noise aversions often includes GABA-ergic therapies, such as benzodiazepines or alpha-casozepine. A novel compound has benzodiazepine-like effects on the hypothalamic pituitary adrenal axis in humans and rats. This study compared the effectiveness of 2 doses of Gabocean 3D PTP55 novel fish hydrolysate on simulated thunderstorm exposure in a laboratory.

Forty-five beagles with normal complete blood count/biochemistry panels were split into 2 cohorts for testing days. Thunderstorm tests consisted of 3 minutes of the Sounds Scary! Thunder Therapy CD, at peaks of around 90 dB.

Cohort 1 started 1 day before cohort 2. Dogs were exposed to the open field in which testing would occur without thunderstorm sounds 8 and 7 days before treatment (day 1). Five and 6 days prior to initiation of treatment, the dogs were again placed in the open field but this time with a thunder test. Baseline and post-thunderstorm cortisol levels were measured. Responsive dogs were defined as having a 25% or greater cortisol response over baseline after the first simulated thunderstorm.

Dogs were allocated to control (maltodextrin capsule), low-dose treatment (750-mg capsule), or high-dose treatment (1500-mg capsule), matched for sex and serum cortisol response. Thunderstorm test 1 occurred on days 14/15 and test 2 on days 26/27, with serum cortisol sampled at 5 minutes and 1 hour after testing. Dogs were exposed to the testing area without thunderstorm for 9 minutes on days 7/8 and 21/22.

Gabocean 3D PTP55 may reduce active anxiety responses and cortisol responses. Specifically, it may help subvert sensitization when used early, a scenario that would more closely mimic this laboratory setting. 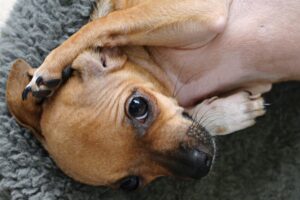 A tendency toward fear, anxiety, and sensitivities results from genetic, epigenetic, and environmental factors. The specific environmental factors have not been well evaluated, nor have early life experiences, such as maternal care, as they pertain to fears and anxieties.

The family owners of 3264 dogs in Finland were surveyed about the following factors: maternal rearing, birthplace, age of separation from mother, type of food, extra nutrients, time spent alone per day, daily amount and type of exercise, types and number of family members living with dog, indoor/outdoor living, and number of dogs owned previously. A validated survey was used to assess fear, noise sensitivity, and anxieties.

When dogs with other fears or anxieties were removed from the analysis, noise-sensitive dogs:

In this analysis, among dogs with all 3 comorbidities, the generalized chi-square was poor (0.66) and the results should be interpreted cautiously. These dogs:

Amount and type of exercise may be an indicator of overall welfare or management as well as a stress buffer for noise fear. Maternal care and exercise early in life versus current amount of exercise should be studied. Direct measures of exercise duration and intensity, rather than owner-reported measures, may further elucidate associations. Intact females were more likely to have noise fear than intact males, but neutered dogs were more sensitive than intact dogs. The largest association was with the amount of exercise: noise fear started later in free-exercising dogs than those always on leash. Additionally, owner reporting of separation anxiety may underreport mildly affected, nondestructive, nonvocal dogs, so associations with this anxiety should be further evaluated.