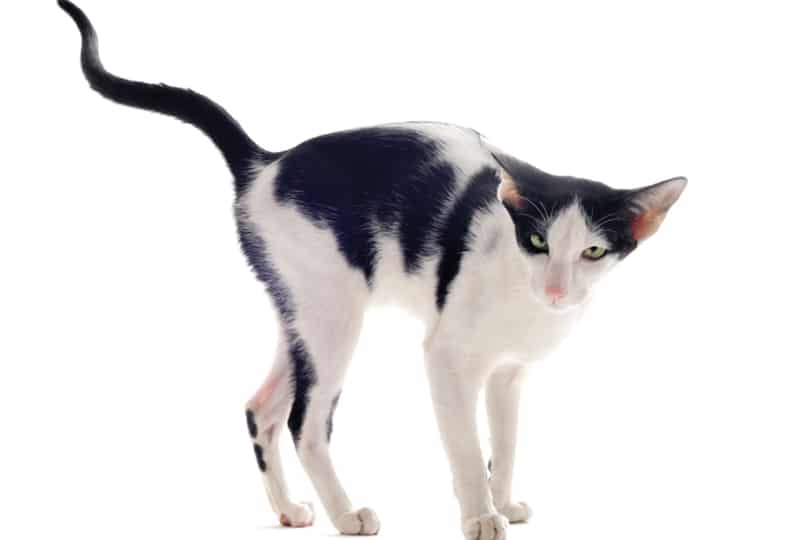 Although urine spraying is typical in sexually intact cats, approximately 10% of neutered males and 5% of ovariohysterectomized females urine spray.1 Inappropriate urination of all types—toileting behavior as well as marking—is the most common behavior problem encountered in cats.

Although statistics of lifetime occurrence are not known, it is likely that a significant percentage of pet cats will urinate or defecate outside the litter box at some point in their lives. However, a substantial number of these cats are marking rather than toileting. Knowledge of the risks, presentation, diagnosis, and treatment of urine marking is, therefore, critical for veterinarians.

Urination can have more than one function.

Urine marking is the normal and deliberate deposition of urine as a:

We usually think of marking as spraying behavior, in which cats back up to a vertical substrate and spray a small amount of urine. However, cats may also urine mark on horizontal surfaces. The latter behavior resembles urination for toileting purposes, with a few important differences (see Table, page 49).

Inappropriate toileting behavior (also called feline inappropriate elimination) is most often due to:

Not uncommonly, all three might be involved when a cat with lower urinary tract disease associates the litter box with pain/dysuria and urinates elsewhere in the home. Even after resolution of disease, the cat might easily have learned to prefer the “inappropriate” spot.

Presented with client complaints of urination, many veterinarians mistake urine marking for inappropriate toileting behavior.2 The two diagnoses can be especially confusing if the cat is marking on a horizontal surface. Keep the following in mind to help determine the correct diagnosis:

When cats urine mark, they tend to deposit small amounts of urine on objects and surfaces that have some social significance, are central and visible to others, and/or are near windows and doors through which the cat can view other animals outdoors. Examples of socially significant objects include dirty laundry, gym bags, books and keys, shoes, pillows, and furniture. Because the point of such marking is typically to “advertise” their pheromones, it makes sense that they do not attempt to cover the urine, but simply walk away. 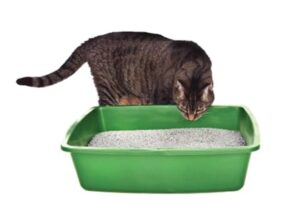 HOW IS URINE MARKING TREATED?

Treatment of urine marking includes a combination of:

1. Identify or Rule Out Organic Disease

Regardless of duration or presentation of the problem, any urination outside the litter box, including marking, should be addressed initially as a possible manifestation of disease. Although disease is more frequently associated with inappropriate toileting behavior, presumably due to pollakiuria and stranguria, it may also be associated with urine marking.

In one study of urine marking cats, 38% were found to have a urogenital medical condition and/or crystalluria.3 A minimum database would include a CBC, serum biochemical profile, urinalysis +/- urine culture and sensitivity, and imaging.

It is important to remember that inappropriate toileting or urine marking may become learned and persist after the cat’s disease is treated.

Owners should be asked to keep a log tracking the frequency, pattern, locations, and contexts related to urine marking. If a cat that sprays 3 times per day, decreases his sprays to twice a week, it is a significant improvement that, without a diary, might not be acknowledged.

Urine marking can be the result of arousal and stress. Identifying and removing stressors is not always possible, but attention should be paid to any obvious source of tension or anxiety in the home. The details of behavioral and environmental history may help identify possible stressors:

Removal of stressors does not have to be literal to be effective. Clearly, it is not possible or desirable to simply remove other cats in the home. It is important, however, to address the social relationships among multiple cats. Any conflict, fear, or other antagonistic behavior should be acknowledged and managed with separation, desensitization, and interruption (but not punishment).

Conflicts among household cats do not have to include overt fights; one cat can obstruct the other’s access to food, litter, or resting spots simply by sitting in the middle of a room.

Environmental enrichment has begun to be recognized as essential to feline well-being. Many cats are not only expected to live indoors for life but, in many cases, to share the home’s limited space and resources with other cats as well as dogs and humans.

It is possible to train cats to redirect away from certain locations (eg, previously urine-marked areas) or social interactions with other cats.

These simple tools can interrupt social tension among cats in the house or, in the case of single cats, between the cat and family members. However, they can be used only when the owner is present.

For roughly three decades, both surgical and pharmacologic therapies for urine marking have been attempted.

How long should drug therapy be relied upon? Generally speaking, a trial of at least 4 to 6 months is recommended. Avoid abrupt discontinuation and, while tapering the drug, monitor urine marking. Some cats may require longer-term or even lifelong treatment, particularly if the stimulus for urine marking cannot be identified and removed.

Finally, be aware that there might be more than one “culprit” in multiple-cat homes.

Urine marking is common, especially in multiple-cat homes. In order to prevent it, clients should be aware that it can be triggered by both direct (ie, litter box problems, organic disease) and indirect (ie, social conflict, frightening or arousing environmental stimuli) issues. If treatment is approached systematically, it is a manageable problem.