It is one of the most common reasons cats are relinquished to animal shelters. Here's how to develop a treatment plan that ensures that both the pet owner and cat have good-quality lives. 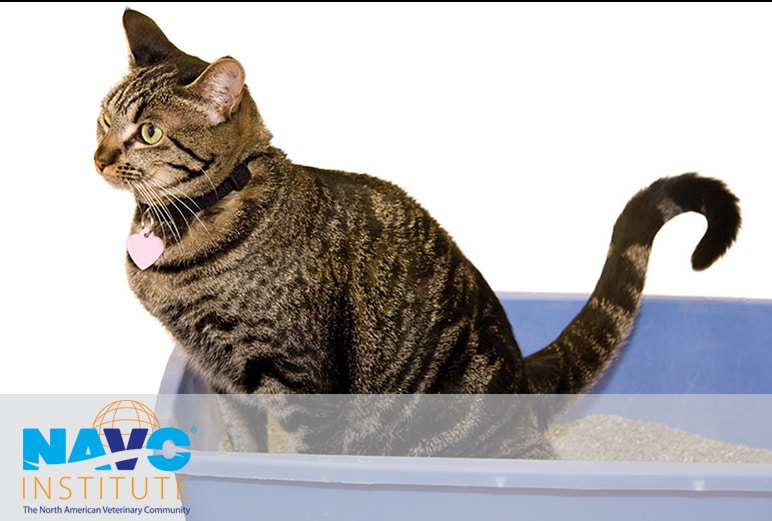 Each year, the NAVC Institute takes place in Orlando, Florida, and top specialists in select areas of veterinary medicine provide hands-on, one-on-one continuing education to the Institute attendees. The NAVC and Today’s Veterinary Practice are delighted to bring our readers the Practical Techniques from the NAVC Institute column, which provides the opportunity to experience the excellent education provided at the Institute within the pages of this journal. This article reviews information from the session, Clinical Behavior: Getting Answers to Your Cases, presented at the NAVC Institute 2015 (July 16–31).

When communicating with clients about feline house soiling, it is important to use consistent terminology (see The Latest Guidelines & Terms).

Inappropriate elimination is typically characterized by the cat discontinuing—either completely or partially—use of the litter box for urination and/or defecation. When eliminating outside of the litter box, the cat usually squats while urinating, and typically deposits a large amount of urine on a horizontal surface.

Urine marking or spraying is characterized by the cat typically continuing to urinate and defecate in the litter box, but also marking or spraying vertical surfaces. When marking/spraying, the cat is usually standing, with the tail up and twitching. Urine marking can be a complicated problem, often involving medical therapy, which is beyond the scope of this article.

In 2014, the American Association of Feline Practitioners (catvets.com) and the International Society of Feline Medicine (icatcare.org) released the AAFP and ISFM Guidelines for Diagnosing and Solving House-Soiling Behavior in Cats, available at catvets.com/guidelines/practice-guidelines/house-soiling.1

In these guidelines, the term inappropriate elimination is replaced with house soiling because the latter term implies no misconduct by the cat and, thus, may encourage owners to better follow veterinary recommendations.

When a cat is presented for inappropriate elimination medical causes that may be contributing to the behavior need to be identified, if present. These causes include:

A classically conditioned aversive association with the litter box can occur if a cat experiences an event that causes pain during urination and/or defecation in the litter box. When cats defecate outside of the litter box, it is often the result of such an event. In other words, the cat with constipation or diarrhea experienced discomfort in the litter box and is now defecating in another area.

This inappropriate behavior may persist even though the constipation or diarrhea has resolved. As with medical etiologies for urinating outside of the litter box, the same holds true with defecating outside of the box: diagnose and treat any ongoing medical problems and proceed with general litter box recommendations (see Develop a Treatment Plan).

To begin, collect general information regarding:

If the behavior is new, ask the owner whether any changes related to litter boxes have taken place, such as switching box type, litter type, and/or location.

It is also helpful to view a floor plan of the house that shows the location of food, water, litter boxes, and soiled areas.

Identification of the Culprit

In a multicat household, it may be difficult to identify the culprit, or there may be more than one. Have the owner confine the cat suspected of eliminating outside of the litter box to help begin the process of determining which cat is the culprit (or if both cats are the culprits).

For example, there are 2 cats in the household—Cat A and Cat B—and one (or both) is urinating outside of the litter box. Confining one of the cats can provide the following information:

Another option to help determine the actions of cats within the household is to set up a video camera—either where the litter boxes are located or in the area where the accidents are taking place.

For more information on urine marking/spraying in cats, read the On Your Best Behavior article, Diagnosis & Management of Feline Urine Marking (March/April 2012), available at tvpjournal.com.

There are several differential diagnoses for the cat that is urinating and/or defecating outside of the litter box (Table). 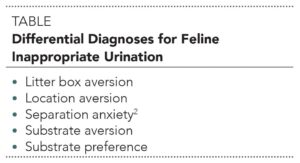 With these aversions, the cat does not like the provided substrate or litter box. Behaviors that indicate an aversion include perching on the edge of the box, minimal digging/covering, shaking the paws, and/or a hurried exit. Causes include:

When a cat has a substrate preference, it has found a more desirable substrate than the one provided in the litter box and/or prefers a specific texture, such as carpet, wood floor, or linoleum; sometimes these preferences are the result of early learning.2

While a multitude of substrates are available, studies show that cats prefer a finely textured, unscented, clumping litter.3 However, cats have individual preferences for texture, granularity, and coarseness, and the key to helping resolve inappropriate elimination is providing a substrate the cat “likes.” Encourage owners to be creative and try substrates, such as diapers, carpet swatches, towels, and even potting soil or sand, especially for cats that have been outdoors.

This aversion is usually the result of the cat living in one part of the house and the litter box being located elsewhere. For example, a cat’s “core area” is on the third floor but the litter box is in the basement. Another example is a litter box that is located in a dark room. While cats can see in dim light, they cannot see in total darkness. The cat may use the litter box during the day, but avoids that location at night. This type of problem can be easily corrected with a simple night light.

In one retrospective study, the most common behavior in cats with separation anxiety was inappropriate urination, with the owner’s bed a popular spot for urination.4 However, often changes in litter box hygiene (ie, box not cleaned as often) during the owner’s absence results in the inappropriate elimination as the cat does not want to use a “dirty” litter box.

The treatment of inappropriate elimination is based on environmental modification—finding the perfect litter box.

As outlined in the 2014 AAFP and ISFM Guidelines for Diagnosing and Solving House-Soiling Behavior in Cats, “bigger is better” when it comes to litter boxes.1 The recommended specifications include a rectangular shaped box that is 1.5× the length of the cat (from nose to base of tail) or a minimum of 22 × 17 inches.

Typically, commercially available litter boxes are too small, so encourage your clients to investigate other sources, such as under-the-bed storage containers or concrete mixing trays. In addition, research has shown that cats are equally divided regarding preference for open or covered boxes,5 but the covered box still needs to meet the above size requirements. If the box is covered, the opening should allow easy access.

It seems that the biggest influence on litter box preference is cleanliness. Advise clients that it is important to clean the litter box at least once a day. Depending on litter quality, the box should be emptied, washed with mild soap and water, and filled with new litter to a depth of at least 3 inches every 2 to 4 weeks.

As with all real estate, when it comes to elimination, it is “location, location, location.” Litter boxes should be located in the core area where the cat lives. For example, if the cat spends most of its time in a second floor bedroom, the litter box should be near the bedroom, not in the basement.

It is also important to have an adequate number of litter boxes. The generally accepted rule of thumb is one litter box per cat in the household plus one more—but not all in the same location. Otherwise, all the boxes are similar to one big box, which is not ideal.

It is best to have at least one large box in each area where the cat spends its time, and this is particularly important when there are multiple cats in the household. Each cat should have easy access to a litter box and a safe route of egress that avoids an encounter with a potential enemy.

While working to design the perfect litter box setup, it is important to clean any soiled areas and make them inaccessible or aversive, such as using plastic carpet runners with the “nubby” side up or aluminum foil, or setting up motion detectors.

Anxiolytic medication is generally not indicated for feline inappropriate elimination. As stated earlier, if the cat has a urinary and/or intestinal condition, medical management should be administered as indicated by the therapeutic approach for that condition.

When the Client Has Had Enough

Remember, by the time your client tells you about inappropriate elimination, his or her cat may have been urinating/defecating outside of the litter box for years, and the client may be looking for a quick fix.

At that point, “thinking outside of the box” is paramount. Options to avoid relinquishment include: