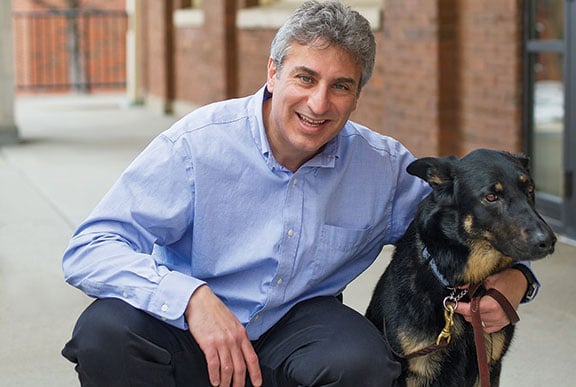 Jaime Modiano is the Alvin and June Perlman Professor of Oncology and Comparative Medicine in the University of Minnesota College of Veterinary Medicine and a Masonic Cancer Center member. The Shine On Project at the University of Minnesota College of Veterinary Medicine is following over 200 healthy dogs at risk for developing hemangiosarcoma. The goal is to evaluate the use of a novel blood test to assign a level of risk to each of these dogs. Dogs that are at a high risk are eligible to receive eBAT — a promising drug developed at the University of Minnesota — as a preventative tool. eBAT is unique because it can kill the emerging cancer cells and irreparably damage the environment they need before they have a chance to form a tumor. Photo Credit: Liz Banfield

The promising results from a University of Minnesota College of Veterinary Medicine research project and clinical trial not only benefits dogs with canine hemangiosarcoma, but may be applicable to humans too.

The third phase of the Shine On research project on canine hemangiosarcoma (HSA) detection test is how underway. This phase seeks to to determine if a test looking for specific cells in the blood can be used to detect hemangiosarcoma in its earliest stages, before a tumor has formed, and to implement hemangiosarcoma prevention through eradication of the tumor-initiating cells with eBAT. eBAT was developed at the University of Minnesota with the goal to kill cells that are responsible for tumor formation, therefore arresting cancers before they start. Phase 1 was designed to refine the hemangiosarcoma diagnostic blood test. Phase 2 was designed to determine the ability of the diagnostic blood test to predict relapse in dogs with hemangiosarcoma that are undergoing treatment.

Hemangiosarcoma is a highly invasive type of cancer that grows rapidly, and is very similar to angiosarcoma, which affects humans. “Canine hemangiosarcoma was initially recognized as an entity in the biomedical literature during the 1950s and 1960s, coinciding with the time when the relationship between dogs and humans had started to evolve from one where dogs largely served working roles such as herding, guarding, and hunting to one where they were considered members of the family,” says Modiano.

While the cause of the disease is unknown, certain breeds (Golden Retriever, Portuguese Water Dog, Boxer, German Shepherd) are considered to be high-risk. “Any dog of any age of any breed, including mixed breeds, and of either sex, regardless of whether it is intact or neutered, can develop hemangiosarcoma,” stresses Modiano. “However, it is most common in older dogs — more than half of the affected dogs will be 10 years of age or older — and it does seem to be diagnosed more frequently in certain breeds.”

This “breed predilection” was initially recognized in the 1960s and 19070s, explains Modiano. “Since the 1980s, the number of breeds that appear to be at high risk has continued to increase, almost certainly because of greater awareness and recognition of the disease,” says Modiano. “Indeed, there is no evidence to suggest dogs from any breed, or even mixed-breed dogs, are ‘protected,’ and in fact, whatever heritable contribution to risk exists in each breed could be continually evolving due to the influence of popular sires over time. In addition, changes in overall breed popularity could also appear to influence overall risk of hemangiosarcoma as the number of dogs of those particular breeds fluctuates up or down.”

The prognosis of dogs diagnosed with hemangiosarcoma is dependent on where the tumor is located. “Hemangiosarcomas that start in, or spread to internal organs, muscles, or the bone marrow are almost invariably fatal,” says Modiano. “The principal goal of treatment for these tumors is not necessarily to achieve a cure, but rather to slow down or delay the spread of the disease and to prevent or delay the occurrence of life-threatening bleeding episodes. This is why surgery to remove any visible tumor mass may be recommended for hemangiosarcoma patients whose condition is otherwise stable even if there is widespread metastasis.”

Without treatment, most dogs diagnosed with hemangiosarcoma of the internal organs will die within one to two weeks, although some can survive for several months. “For dogs with hemangiosarcoma of the spleen treated with surgery, the median survival time  — that is, the length of time when half of dogs receiving this treatment would remain alive — is one to three months,” says Modiano. “Adding chemotherapy to the treatment, using protocols that include the drug doxorubicin given repeatedly at two- to three-week intervals, or possibly a combination of multiple drugs given daily, increases the median survival time to four to six months, making the combination of surgery and chemotherapy the preferred and most effective treatment available for this disease.”

Hemangiosarcoma cells in most dogs inevitably develop resistance to chemotherapy, explains Modiano, “so only 10 to 15% of dogs diagnosed with hemangiosarcoma of the spleen will be alive one year or longer after their diagnosis. Studies performed in the last two decades using new combinations of old drugs, immunotherapy, and new drugs, have shown no benefit to improve survival for dogs with hemangiosarcoma of the spleen as compared to conventional surgery and chemotherapy. Survival time estimates for tumors located in other organs have more uncertainty, but generally the prognosis for tumors that involve the heart, liver, and other internal organs is worse than for tumors of the spleen, but the prognosis for tumors that are localized to the skin is much better than for tumors of the spleen.”

The blood test is based on work Modiano’s team completed in the early 2000s. “It showed that we could detect a small, but unique population of cells in blood that seemed to be preferentially found in dogs with hemangiosarcoma,” says Modiano. “The test uses a technology called flow cytometry, which allows us to identify very rare cells that are ‘hidden’ among hundreds of thousands or even millions of normal cells in the circulation. These rare cells are present more often and in greater numbers in dogs with hemangiosarcoma than in healthy dogs, or dogs with other diseases. And they seem to enter the circulation very early on in the process of hemangiosarcoma development. However, the test had not proceeded further in development because until recently, it was not actionable. In other words, we did not have a rational treatment or prevention strategy that could be ethically given to dogs that were found to be at high risk of developing the disease.”

Modiano says a breakthrough in therapy was needed. “It came with the development of a genetically engineered drug called EGF bispecific angiotoxin or eBAT,” he explains. “eBAT belongs to a class of drugs called ligand-targeted toxins. This drug targets two proteins that are rarely present at the same time in normal cells, but almost always occur together in hemangiosarcoma cells. The initial clinical trial results using eBAT in dogs showed that this drug increased the expectations for length of survival of dogs with hemangiosarcoma of the spleen by almost two-fold. And although the trial was relatively small, treating only 23 dogs, six of the dogs survived longer than 1½ years, exceeding the expectations of about 10% long-term survival.

“In the context of its potential use as a targeted drug for prevention, it was very important that eBAT was able to kill the cells that are responsible for maintaining hemangiosarcoma tumors, and that it appeared to disrupt the environment that these tumors need in order to grow,” Modiano adds. “Both of these mechanisms are unique, but what made eBAT even more attractive for this purpose was its exceptional margin of safety. Unlike conventional chemotherapy, eBAT has shown no chronic side effects that would make it unacceptable as a treatment for dogs that are otherwise healthy.”

What prompted Modiano to enter the field of veterinary oncology? “For almost as long as I can remember I have been intrigued by why cancer happens – what makes cells stop responding to cues for when they should start and stop dividing, and when they should live or die,” he says. “My research experience in college and graduate school gave me a strong foundational background in the fields of genetics and immunology. My graduate mentor, Dr. Peter Nowell, is generally considered to be the father of modern cancer genetics. I continued to develop my interest and experience in cancer during my post-graduate training and this has been the major area of emphasis in my research laboratory for almost 25 years.

“My training in immunology has also allowed me to investigate autoimmunity. Diabetes, myasthenia gravis, multiple sclerosis, and other common autoimmune diseases are caused when the mechanisms that control a patient’s own immune system break down. This causes white blood cells to attack and destroy the patient’s own tissues. The flip side of this excessive and inappropriate immune function is cancer. In order for a tumor to grow, it has to evade the patient’s own immune system — essentially turning some or much of it ‘off.’ Health is somewhere in the middle, where there is a well-balanced immune system that keeps cancer in check and doesn’t attack the host (animal/person). By studying both sides of this immune equation, we can fine-tune approaches to understand how to prevent and treat cancer, as well as autoimmune diseases such as diabetes.”

Interested in learning more about the field of veterinary oncology? Check out the Oncology Archives of our website.