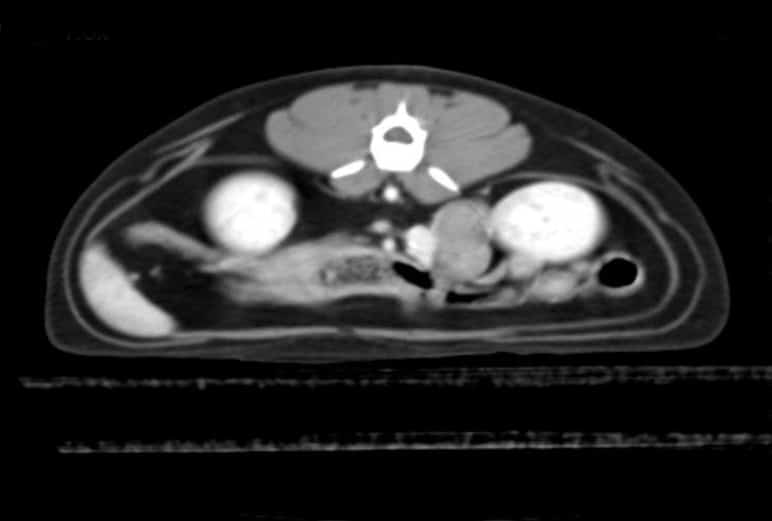 Canine pituitary dependent hyperadrenocorticism (PDH), also known as Cushing’s disease, is a common endocrine disorder in older dogs. This disorder is caused by a pituitary adenoma (PA) that secretes inappropriate amounts of adrenocorticotropic hormone (ACTH), which results in bilateral adrenal hyperplasia and disorderly and excessive production of cortisol by the adrenal gland.

Read Part 1 of this series—Comparative Epidemiology & Etiology in Dogs & Humans (November/December 2015)—at tvpjournal.com. This article briefly described the diagnosis of PDH, including clinical signs, common laboratory findings, and atypical presentations of canine PDH.

In 2012, the American College of Veterinary Internal Medicine (acvim.org) issued a consensus statement, Diagnosis of Spontaneous Canine Hyperadrenocorticism, that provides a thorough review of the diagnostic approach to patients with PDH and addresses many common clinical concerns.1 Access this statement at onlinelibrary.wiley.com/doi/10.1111/jvim.12192/epdf.

In all patients being screened for PDH, the following initial diagnostics should be performed prior to endocrine diagnostics:

These diagnostics are important as the clinical signs of PDH are rarely pathognomonic, and patients are generally older and may have comorbidities that affect endocrine function tests (Table 3) and impact therapeutic options and prognosis. 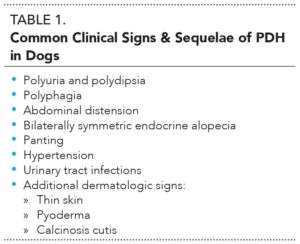 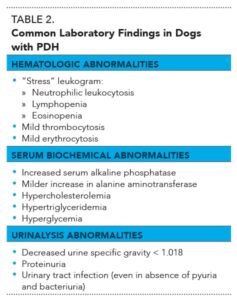 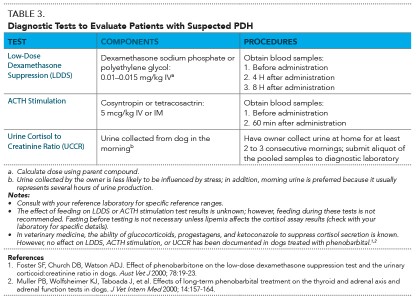 Specific endocrine tests and imaging modalities are available to both diagnose PDH (Table 3) and distinguish between the various causes of hyperadrenocorticism (HAC). No single test is perfect and, if the initial screening test is negative and high clinical suspicion of PDH exists, additional tests should be performed to determine a definitive diagnosis.

Several endocrine screening tests are available to arrive at a diagnosis of HAC, including:

Additional tests may be required to differentiate PDH from other causes of hypercortisolemia, such as endogenous ACTH measurement and advanced imaging.

If a patient has a concurrent serious illness, postpone testing until the illness or injury has resolved or been controlled to minimize false positive test results.

LDDS demonstrates decreased pituitary sensitivity to negative feedback from glucocorticoids, via mechanisms discussed in the first article in this series.

Indications. Most consider LDDS the screening test of choice for HAC unless the patient history suggests iatrogenic HAC, in which case ACTH stimulation is preferred.

Sensitivity/Specificity. In veterinary medicine, the reported sensitivity and specificity of the LDDS test range from 85% to 100% and from 44% to 73%, respectively.2-10

ACTH stimulation assesses adrenocortical reserve. Due to greater purity and quality control, use of synthetic ACTH is recommended. Use of compounded ACTH is discouraged, especially when monitoring patients on adrenolytic agents or adrenal enzyme blockers (see Synthetic Versus Compounded ACTH).

Indications. ACTH stimulation is the gold standard for diagnosis of iatrogenic HAC and spontaneous Addison’s disease (hypoadrenocorticism). Diagnosis of HAC is based on finding an elevated cortisol concentration (post ACTH administration) based on the reference range established by the laboratory.

Due to its low sensitivity, it is inferior to LDDS as a screening test for spontaneous HAC. However, many clinicians still use ACTH stimulation because of its convenient study duration of 60 minutes and relative effectiveness in the clinical setting, especially when combined with abdominal ultrasound evaluation and interpreted in light of the history and physical examination.

Synthetic polypeptides, such as Cortrosyn (cosyntropin) or Synacthen (tetracosactrin), contain the biologically active first 24 amino acids of ACTH; however, their potencies have not been compared.

Cosyntropin can be reconstituted, divided into aliquots in plastic syringes, and frozen at -20°C for 6 months.19 Whether tetracosactrin can be frozen has not been investigated; according to the manufacturer, store it at temperatures from 2°C to 8°C.

UCCR provides an integrated reflection of cortisol production, adjusting for fluctuations in blood concentrations. Determination of basal UCCRs can be performed alone or in tandem with other endocrine testing.

Indications. UCCR can be used as a screening test for hypercortisolemia, although a single positive result should not be overinterpreted. Adding oral dexamethasone suppression to UCCR testing has the advantage of potentially demonstrating both increased cortisol production and decreased sensitivity to glucocorticoid feedback.

Sensitivity/Specificity. When a single, random urine sample is collected in veterinary hospitals, reported sensitivity and specificity of UCCR for diagnosis of HAC ranges from 75% to 100% and 20% to 25%, respectively.20,21 In some dogs, there is considerable day-to-day variation in UCCR results.22

However, in dogs with physical and biochemical changes consistent with HAC, when 2 basal UCCRs were above the cut-off level:22

Given that PDH and adrenal dependent hyperadrenocorticism (ADH) are the most common forms of HAC, and that their treatment options and prognoses differ, it is important to recommend additional testing to determine the exact etiology of HAC. Several diagnostic modalities are commonly used to differentiate between PDH and ADH (Table 4):

Canine ACTH is secreted from the pituitary gland in an episodic, pulsatile fashion in both healthy dogs and those with PDH.1 A circadian rhythm has not been convincingly demonstrated, although one study reported higher plasma concentrations of canine ACTH (cACTH) in late afternoon than in the morning.23
Indications. Concentrations of cACTH do not differ between healthy dogs and those with PDH, and its measurement is not useful to screen for HAC. However, measurement of cACTH is the most accurate stand-alone biochemical test for differentiating PDH from an adrenocortical tumor (AT), but the sensitivity of the assay differs with methodology. Normal or elevated concentrations of cACTH are consistent with PDH, while suppressed values are consistent with ADH.

Sensitivity/Specificity. The most common problem with the cACTH assay is poor sensitivity. The largest study of cACTH in dogs with HAC used a 2-site solid-phase chemiluminescent immunometric assay (Immulite 2000 Immunoassay System for ACTH; healthcare.siemens.com) and showed excellent discrimination between PDH and AT.

The likelihood of falsely low ACTH values in dogs with PDH is increased by: 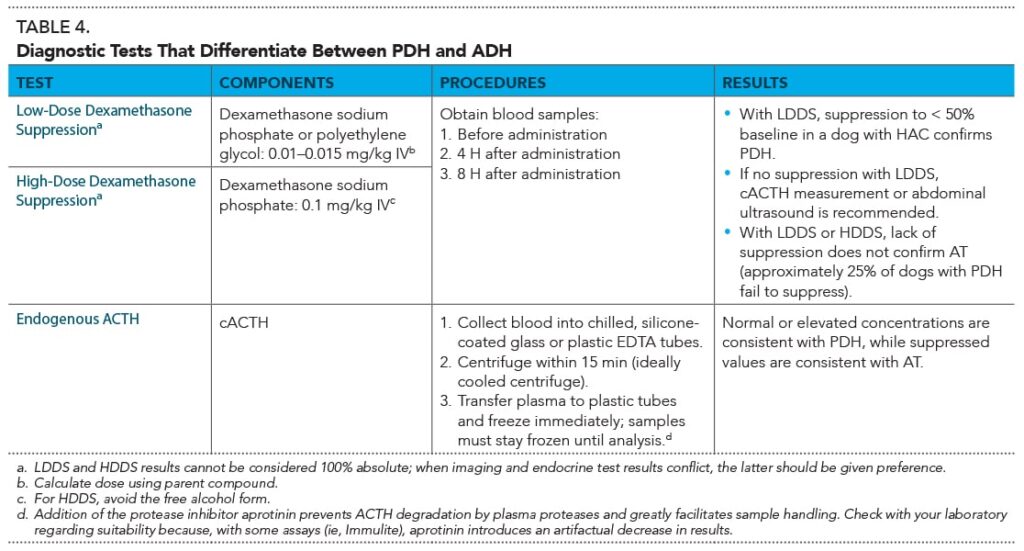 Approximately 75% of dogs with PDH met at least one criterion for suppression on either LDDS (88%) or HDDS (12%).2

Dexamethasone resistance (ie, no criteria were met) occurred in all dogs with AT and the remainder (25%) of the dogs with PDH.2 In another study of 41 dogs with ATs, 28 LDDS and 30 HDDS tests were performed, with no suppression seen on any test.2,30

In dogs demonstrating lack of suppression with LDDS, use of endogenous ACTH rather than HDDS is recommended to differentiate PDH from ADH. Since suppression in response to dexamethasone supports a diagnosis of PDH, a dog with dexamethasone resistance can have either AT or PDH.

After the patient’s owner/handler collects a morning urine sample on 2 consecutive days, 3 doses of dexamethasone (0.1 mg/kg PO) are administered at 6 to 8 hour intervals, with a third urine sample collected the next morning.

Decrease in the third UCCR to < 50% of the mean cortisol basal values is consistent with PDH. Lack of suppression does not confirm AT.

Evaluation of the Pituitary–Adrenal Axis

Evaluation of the pituitary-adrenal axis is indicated in the following circumstances:

While imaging can be very helpful in differentiating PDH from ADH, it cannot be used to establish a diagnosis of HAC. Moreover, finding normal adrenal glands on imaging studies does not rule out HAC.

Imaging results may include:

A small liver makes HAC unlikely. An AT may be visualized either due to mass effect or tumor calcification.32,33

Adrenal gland width is the most informative parameter identified on ultrasonography (Figure 1). However, the following may affect correct measurement: 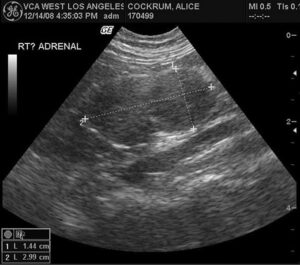 Ultrasonography can also estimate AT size and possibly vascular or local soft tissue invasion. Although most ATs are unilateral, bilateral tumors may occur and in these patients, endogenous ACTH concentrations should be determined.

Metastasis. When an AT has been confirmed, certain thoracic and ultrasonographic findings suggest malignancy, including: 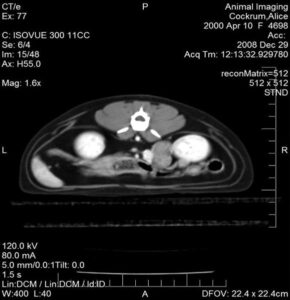 Adrenalectomy should not be performed without confirming the presence of an AT (and atrophy of contralateral adrenal gland) by abdominal ultrasonography (Figure 3), CT, MRI, or some combination of these. Metastasis can be confirmed by ultrasound-guided biopsy, but differentiating benign from malignant AT often is difficult, even with histopathologic examination.

FIGURE 3. Ultrasound (A) and surgical view (B) of adrenal adenoma.

Pituitary imaging provides valuable information regarding treatment options and prognosis.37 Pituitary lesions range from microscopic nests of hyperplastic cells to large tumors. Absence of neurologic abnormalities does not exclude pituitary macrotumors (ie, tumors that are > 1 cm in diameter, extend above the sella turcica, or have a pituitary:brain ratio of > 0.31).

Indications. Pituitary imaging should be considered for all dogs at time of PDH diagnosis, especially if hypophysectomy or radiation therapy is being considered. If clinical features suggest a pituitary macrotumor, confirmation requires imaging; clinical signs include:

FIGURE 4. Axial (A) and sagittal (B) T1 post contrast MRI images from a dog with PDH and large pituitary macroadenoma.

FIGURE 5. Axial (A) and sagittal (B) T1 post contrast MRI images from a dog with PDH prior to surgery. Note the pituitary (arrows).

FIGURE 6. Axial (A) and sagittal (B) T1 post contrast MRI images from dog in Figure 5 after surgery.

Dorsal displacement and decreased signal intensity of the posterior lobe on T1-weighted MRI indicates the presence of a microtumor.38,39

Diagnosis of PDH requires incorporating information from the history, physical examination, and routine laboratory tests. Specific endocrine tests and imaging modalities are available to diagnose HAC and distinguish between the various causes of hypercortisolism. No single test is perfect and, if the initial screening test is negative and high clinical suspicion of HAC exists, additional tests should be performed. Endocrine evaluation of patients with HAC and nonadrenal illness can be difficult, and it is important to eliminate or manage the concurrent illness before undertaking adrenal function tests.

David Bruyette, DVM, Diplomate ACVIM, is the medical director at VCA West Los Angeles Animal Hospital and President and CEO of Veterinary Diagnostic Investigation and Consultation. He was an assistant professor and head of internal medicine at Kansas State University and director of its Analytical Chemistry Laboratory. Dr. Bruyette received his DVM from University of Missouri and completed an internship at Purdue University and residency in internal medicine at University of California–Davis. He then became a staff internist at West Los Angeles Veterinary Medical Group and member of the Department of Comparative Medicine at Stanford University.

Uncovering the Cause of Fever in Cats