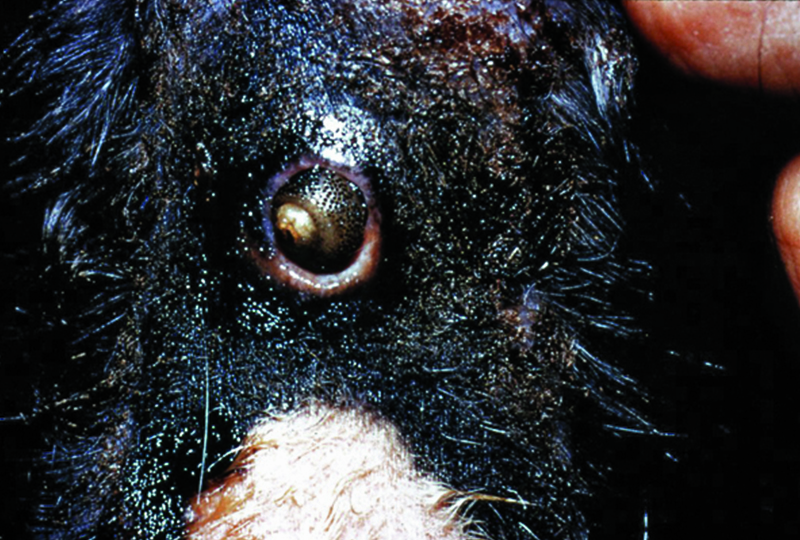 The mission of the Companion Animal Parasite Council (CAPC) is to foster animal and human health, while preserving the human—animal bond, through recommendations for the diagnosis, treatment, prevention, and control of parasitic infections. For more information, including detailed parasite control recommendations, please visit capcvet.org.

With approximately 1 million species, arthropods compose the largest of all animal phyla. There are at least 6 arthropod classes of medical importance; this article discusses those in the Insecta class that affect dogs in the United States (Table 1). 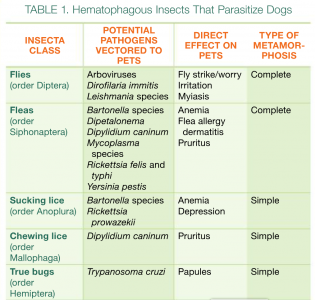 Characteristics that distinguish arthropods from other invertebrates include a hard exoskeleton and pairs of jointed appendages. Different arthropod taxa undergo different degrees of metamorphosis as they develop from immature to adult stages, which can be key to effective control of arthropod ectoparasites.

All members of an insect order share a common maturation process, or metamorphosis. Although entomologists recognize several forms of metamorphosis, when it comes to insect control, only simple versus complex (or complete) metamorphosis is considered.

Diptera (di meaning two, and ptera meaning wings) usually have a single pair of wings (some, such as sheep keds, are wingless). True flies can be difficult to control, partially because of complete metamorphosis that necessitates integrated control measures.1

The 3 large dipteran groups, distinguished by antenna morphology, are also distinguishable according to control measures: 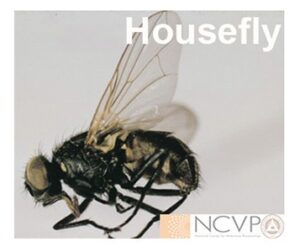 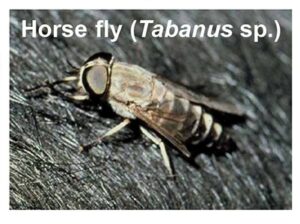 Figure 2. Brachyceran larvae are often found along waterways lined with vegetation and mud. 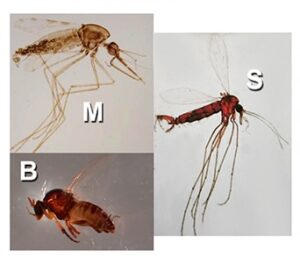 Figure 3. Among the Nematocera, immature blackflies (B) are found in rapidly running water; immature mosquitos (M) are found in still waters associated with flooded areas, permanent pools of water, or temporarily filled containers; and immature sandflies (S) are found in crevices or burrows that offer a dark microenvironment with high relative humidity and moderate temperature.

Cyclorrhaphans, including houseflies (Musca domestica), that affect domestic animals are often called “filth flies” because larval and pupal stages are associated with decaying organic material. Some filth flies, such as stable flies (Stomoxys calcitrans), are hematophagous as adults.

Flesh flies and bottle flies can be associated with facultative myiasis that is often secondary to poor host condition. Some muscoid flies undergo obligate myiasis, which requires a living host for their larval stages. Among these, rodent bots (Cuterebraspecies) are myiasis-producing flies found in U.S. companion animals (Figure 4). 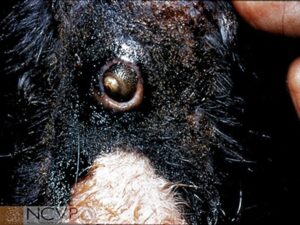 Figure 4. A rodent bot (Cuterebra species) in the neck of a cat. Female Cuterebra flies deposit eggs around burrows of their natural hosts (rodents), but the larvae also invade predators that visit these burrows.

Adult horse flies and deer flies are voracious blood feeders that can serve as mechanical vectors of blood-borne pathogens, such as Francisella tularensis. Brachycera breed near slow-moving water with muddy banks and vegetation.

Hematophagous female mosquitoes, sandflies, midges, and black flies are important pests themselves; however, they are even more problematic as vectors of pathogens and parasites, including:

Fleas are small (≤ 1/8 inch), wingless, laterally flattened insects that are exceptional jumpers. In dogs, pruritus from adult fleas is common and exacerbated by flea allergy dermatitis. In addition, heavy infestations can cause anemia. Certain flea species have also been incriminated as pathogen vectors.3,4

Fleas are often ecologically adapted to their hosts, which means they may opportunistically infest aberrant hosts that venture into the habitats of their natural hosts. Several flea species parasitize various mammalian and avian hosts; those associated with dogs include:

Adult fleas and flea dirt (ie, flea feces) can be removed from the host with a flea comb; flea dirt (Figure 5) is identified when placed on a moist paper towel, which allows the blood-laden feces to dissolve into visible red spots. 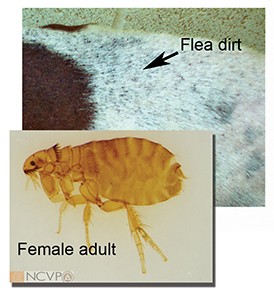 Figure 5. Laterally flattened Ctenocephalides felis fleas feed and lay eggs that fall off the host, allowing the caterpillar-like larvae and pupae to develop in host bedding and other parts of the environment. Flea feces (flea dirt) are shown on the pale skin and fur of a heavily infested dog.

Fleas undergo complete metamorphosis, making their control particularly challenging,5 and most fleas in an infested environment are eggs, larvae, and pupae.

Because infested wildlife or stray companion animals can introduce fleas, the most effective control regimens involve flea preventives from soon after birth (see label claims) throughout the pet’s life. However, there are substantial geographic differences in distribution and seasonality of cat fleas and other flea species; therefore, tailor prevention to the individual pet and client.

Environment. Although once critical, multiple environmental treatments at 2-week intervals may not be required if pet owners can tolerate emergence of new adults from flea pupae, which must be attracted to treated pets before they can be killed.

Canine lice are small wingless insects that differ from fleas in several respects; they:7

Louse nits (eggs glued to hair shafts), nymphs, and adults are all typically found in the same region on the host.

Differentiation of louse head morphology, host species, and sometimes location on the host are often sufficient for identification of lice species.

Canine lice are transmitted between dogs through direct contact or by fomites (eg, bedding or brushes) contaminated with hair from infested hosts.

Nits, nymphs, and adults on fomites eventually desiccate and die.

True bugs have needle-like, piercing—sucking mouthparts. Some members of this order are plant feeders that deliver painful defensive bites. However, medically important true bugs—bedbugs and kissing bugs—are adapted to acquire relatively painless feedings from slumbering hosts at night (Figure 7). Some irritation and itching can occur after these feedings 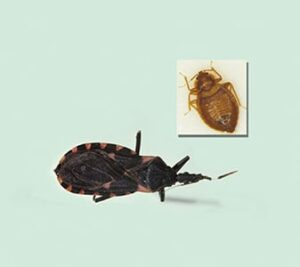 Figure 7. Hemiptera (true bugs), which include Cimex species (bedbugs, A) and Triatoma species (kissing bugs, B), feed on dogs (and human beings). Both possess piercing sucking mouthparts and acquire rapid blood meals from slumbering hosts. The bugs are dorsoventrally flattened, allowing them to reside in cracks and crevices between blood meals.

Kissing bugs, which have 2 pairs of wings, and wingless bedbugs undergo simple metamorphosis and are dorsoventrally flattened. They are found in cracks and crevices during the day during all of their life stages.

Trypanosoma cruzi, the etiologic agent of Chagas disease, has adapted to kissing bug feeding habits, resulting in transmission if kissing bugs infected with T cruzi are eaten or their feces rubbed into vector feeding lesions in the hosts’ skin. Dogs are natural hosts of both kissing bugs and T cruzi.8

Although a few studies have assessed the efficacy of molecules used in flea and tick preventives, such products have not been sufficiently tested for kissing bug control. Thus, kissing bug and bedbug control relies on preventing establishment of home infestations and killing the bugs where they hide during the day. The services of a qualified exterminator are recommended.

Additional information about parasitic insects, insecticides, and specific products to control these and other parasites can be found through the CAPC resource library.2 Additional, in-depth, and regularly updated parasitic disease control guidelines can also be found on the CAPC website. Read additional Parasite Protocols for Your Practice articles at tvpjournal.com.

William Stich, MS, PhD, is a professor of parasitology at University of Missouri, Department of Veterinary Pathobiology. He received his MS and PhD in veterinary parasitology at Oklahoma State University. Dr. Stich served as president for the Conference of Research Workers in Animal Diseases, and as a councilor for the Society of Tropical Veterinary Medicine. He currently serves on the CAPC Board of Directors and as Editor in Chief of Animal Health Research Reviews.