Coagulopathies in Veterinary Patients: When Is It Rat Poison? 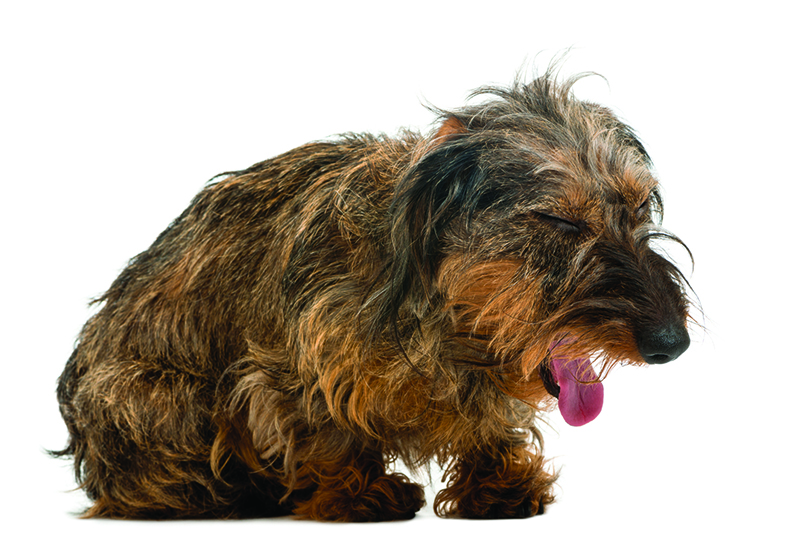 In 2015, d-CON will comply with EPA mandates regarding anticoagulant rodenticides for household use. Learn the ins and outs of coagulopathies through a case study presented by Dr. Liu including diagnostics, primary and secondary hemostatic defects, and treatment.

A few hours prior to presentation, the owner noticed that the dog was weak and coughing up blood. No vomiting, diarrhea, or changes in urination were reported. He was the only pet, and kept in a fenced yard. The dog was current on vaccinations, and not receiving any medications.

The mucous membranes were pale pink, with a capillary refill time of 1.5 seconds. Some blood was noted in the oral cavity. Heart sounds were normal, with a rate of 140 beats per minute; pulses were strong. He was mildly tachypneic, with harsh lung sounds auscultated bilaterally.During the examination, the dog started coughing. The cough sounded wet, and more blood was expectorated. No petechiae or ecchymoses were found. Normal stool was seen on rectal examination. The rest of the physical examination was within normal limits (WNL).

Based on history and physical examination, trauma was not considered a likely diagnosis. The main differentials considered were: 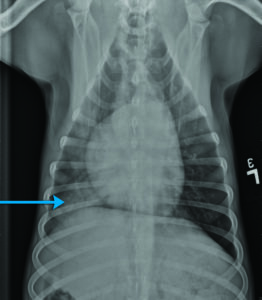 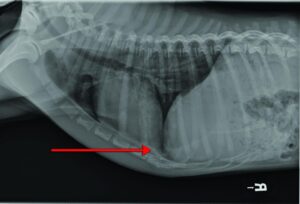 Because the radiographs did not document a specific lung lesion, such as a neoplastic mass, additional testing was warranted. Pertinent results from additional blood analysis are listed in Table 1.

In addition to measuring PT, aPTT, and platelet count, measuring d-dimers and fibrin degradation products (FDPs) may be helpful in distinguishing between different types of secondary defects.

D-dimers are a type of FDP derived specifically from breakdown of cross-linked fibrin. Increased blood levels of d-dimers and/or FDPs detect activation of the fibrinolytic system, which is activated whenever coagulation factors are consumed. This activation is common in animals with intravascular thrombosis and/or disseminated intravascular coagulopathy.

FDPs and D-dimers are removed from circulation by the liver; therefore, they also may be mildly to moderately elevated in animals with liver disease.

In this dog, the D-dimer concentration was 0.15 mcg/mL (reference range, < 0.2 mcg/mL). This normal result, combined with a severely prolonged PT, mildly prolonged aPTT, and normal platelets strongly suggested a clinical diagnosis of anticoagulant rodenticide toxicity (vitamin K deficiency); however, hereditary clotting factor VII deficiency could not be ruled out completely.

Coagulopathies are divided into defects of primary or secondary hemostasis (Table 3):

The dog was treated with 2 units of fresh frozen plasma, and vitamin K1 therapy was initiated (2.5 mg/kg PO Q 12 H). Recheck PT and aPTT were WNL after the transfusion. The patient remained stable, with no further evidence of bleeding, and was discharged the next day with a course of vitamin K1 therapy. The owner reported that coughing subsided in 3 to 4 days.

Vitamin K1 is the most commonly used antidote for anticoagulant rodenticide. It is a more effective and safer therapeutic agent than vitamin K3, which has been reported to cause hemolytic anemia in dogs.

Administration. Vitamin K1 is well absorbed orally and subcutaneously. Gastrointestinal absorption can be further enhanced by feeding a fatty meal at time of drug administration, and portal circulation carries the absorbed vitamin K1 to the liver directly for clotting factor production.

Anaphylaxis has been reported with intravenous vitamin K1 administration; intramuscular injections may cause local hemorrhage and should be avoided in hypocoagulable animals.

Duration. The necessary duration of vitamin K1 therapy is directly related to the elimination half-life of the anticoagulant rodenticide ingested.

In this case, since the exact type of anticoagulant rodenticide ingested was unknown, a 4-week course of therapy was prescribed. A follow-up appointment was planned to re-evaluate PT 48 to 72 hours after completion of treatment to ensure adequate duration of therapy.

Four weeks later, the dog was presented for recheck PT testing 48 hours after the last dose of vitamin K1. PT was normal, and the dog made a full recovery.

If residual toxin had remained, PT would have become prolonged during the 48 to 72 hours after therapy completion. In these cases, vitamin K1 supplementation should be administered for another 1 to 2 weeks, and PT re-evaluated at therapy end.

To avoid repeat ingestion, it is important to ask owner to:

Repeat ingestion of similar toxins may cause relapse of bleeding once vitamin K1 therapy is discontinued.

The Changing Face of Rodenticides

Most veterinarians are familiar with traditional anticoagulant-type rodenticides, including:

All of these products have the same mechanism of action, and clinical management is similar, apart from duration of treatment with vitamin K1.

However, in 2011, in an effort to reduce relay or secondary poisoning in wildlife, the Environmental Protection Agency (EPA) banned the use of second-generation anticoagulant rodenticides for household use. Manufacturers were left with the choice of using first-generation anticoagulants, bromethalin, or cholecalciferol (vitamin D3).

The latter 2 rodenticides are highly toxic and act through different mechanisms than anticoagulant-type rodenticides. Accidental poisonings in pets are difficult to manage.

Reckitt Benckiser (rb.com), the manufacturer of d-CON, the largest selling rodenticide in the U.S., fought the EPA mandate, stating that the ban would lead to increased bromethalin use, increasing the risk of poisoning in pets and children due to its potency as a neurotoxin and the lack of an antidote.

In May 2014, d-CON announced that it would comply with EPA mandates, but would be using the first-generation anticoagulant rodenticide diphacinone, which has a longer duration of action than warfarin. The new product line will be introduced in 2015.

Anticoagulant rodenticides are a common cause of coagulopathy encountered in veterinary medicine.

Debra Liu, DVM, Diplomate ACVECC, is medical director of the Veterinary Emergency Service in Fresno and staff criticalist at VCA Orange County Veterinary Specialists in Tustin, California. She received her DVM from Iowa State University and completed a small animal medicine and surgery internship at University of Minnesota. She completed a residency in small animal emergency and critical care at University of Pennsylvania.