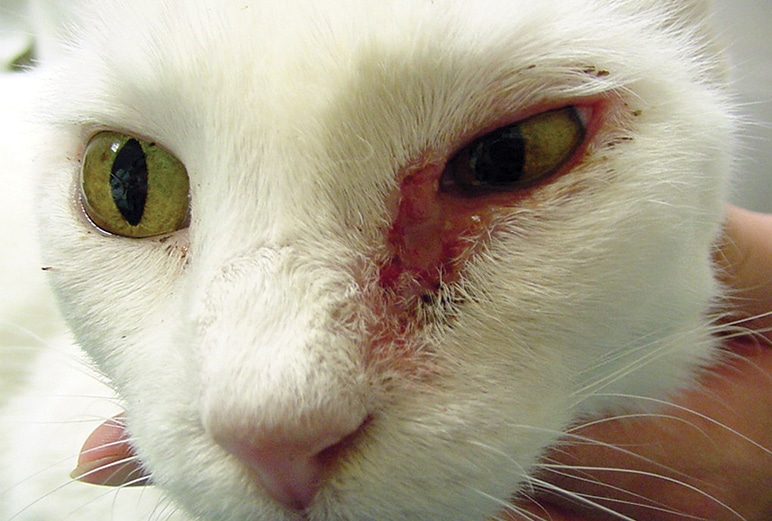 Cytology, the microscopic examination of tissue samples spread onto slides, is a powerful tool for evaluation of skin lesions in small animal patients.1 In many cases, cytology can provide a definitive diagnosis for cutaneous masses. In others, sample evaluation can rule out some differential diagnoses and help the clinician choose the best next diagnostic test to perform.

The first critical step in the use of cytology is obtaining and creating a good cytologic sample.

In vivo collection technique can be performed with a needle alone (fenestration—this author’s preferred technique) or with a syringe attached to the needle (aspiration) (see What You Will Need); both of these techniques are typically called fine-needle aspiration (FNA).

Sample collection and preparation for cytology are simple and require little equipment:

Slide preparation is key for good cytology results. For best cellular evaluation, the samples must be smeared—in a thin layer—quickly to prevent clotting or drying. Smearing is important even if only a small dot of the sample is expelled onto the slide. If cells dry in a little round puddle of fluid, the slide is difficult to assess because the cells maintain more of a 3-dimensional appearance and their cytoplasm is not spread out.

After expelling the contents onto the sample slide:

In this manner, at least 3 to 5 good slides are generally produced from one needle sample, allowing for one slide to be stained and evaluated in-house, while other slides can be sent unstained to a clinical pathology laboratory for evaluation.

Diagnosis. Most MCTs are easily diagnosed via cytology (Figures 3 and 4), although a small percentage of canine MCTs have granules that do not stain well with Diff Quik stain (Figure 5) and must instead have a Wright-Giemsa stain applied (Figure 6). Thus, keeping some of the cytology slides unstained is key. 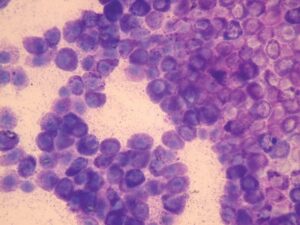 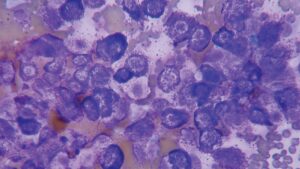 FIGURE 4. Cytology of a canine MCT; similar to the feline MCT, this slide has a large number of round cells with varying amounts of purple staining granules (Diff Quik stain; magnification, 50×). 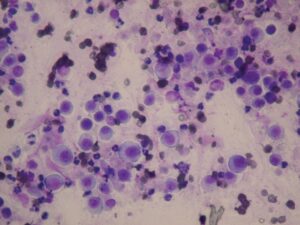 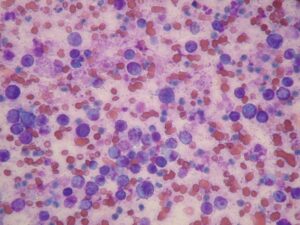 FIGURE 6. Cytology from the same sample as Figure 5, stained with a Wright-Giemsa stain; the mast cell granules now can easily be seen. The red cells also appear much more “red,” and indistinct pink granules can be seen in the segmented cells, confirming that they are eosinophils (magnification, 20×).

A more recent study2 reported on a modified margin technique in which tumors are excised with lateral margins equal to the widest diameter of the tumor, up to a maximum of 4 cm. Forty dogs had tumors removed with clean margins, 7 had incomplete margins, and only one tumor was suspected to have recurrence.

Histopathologic grading is critical to determine the likely systemic biologic behavior of any particular canine MCT, as well as the necessity for systemic therapy after excision.

Description. Squamous cell carcinoma (SCC) occurs primarily in older dogs and cats. Animals with lightly pigmented skin that spend time in the sun are predisposed to solar (actinic) induced SCC in their thinly haired areas. Multiple lesions may be present in these cases, particularly in white cats. In dogs, cutaneous SCC unrelated to sun exposure is the most commonly reported digital tumor and most often affects dark-haired dogs.3

Diagnosis. On physical examination, cats present with facial lesions more frequently than dogs, usually at thinly haired areas, such as the ear tips, eyelids, and nasal planum. These lesions are often crusty and ulcerated. In dogs, digital SCC is usually single but may affect multiple digits in giant schnauzers and other large, black-haired breeds. SCC of the digit appears as a swollen digit with an abnormal nail; it is often diagnosed initially as a fractured nail with a nailbed infection (Figure 7). 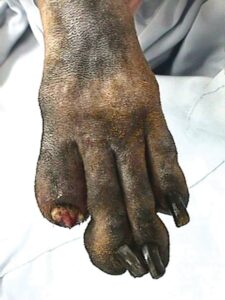 FIGURE 7. The shaved foot of a Gordon setter with a digital SCC, showing severe swelling of digit #5; a broken toe nail and some soft tissue proliferation with discharge are seen at the nail bed.

Cytology can be diagnostic for SCC of the digit (Figure 8). Direct the needle deep into the midpoint of the digit; the bone is often involved and lytic; therefore, a good sample may be obtained from the bone itself. Occasionally, dogs will have so much pain that sedation is needed for FNA. 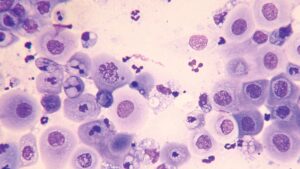 FIGURE 8. Cytology of a SCC; note the large angular cells, some of which appear as individuals, while others appear to be joined. The cytoplasm ranges in color, with many showing deep blue consistent with keratinization. Features of malignancy, including anisocytosis and anisokaryosis, are prominent. Scattered neutrophils are present in the background.

Management. SCC of the skin is a locally invasive tumor but rarely metastasizes; thus, the treatment of choice is wide surgical excision. Depending on the area affected, such surgery may entail nasal planectomy or amputation of 1 to 2 digits. For cats with erosive lesions around their eyes, cryotherapy can be effective (Figures 9 and 10). Depending on the lesion size, liquid nitrogen may be applied with a cotton swab, cryoprobe, or cryospray device, using 2 to 3 freeze–thaw cycles. Protect the eye with ocular lubrication and use extreme care to avoid the cornea.4 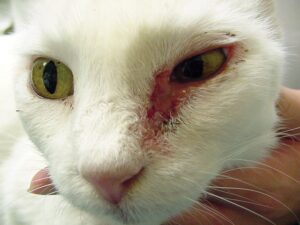 FIGURE 9. Erosive SCC at the medial canthus of the left eye in a 12-year-old spayed female white domestic shorthair indoor/outdoor cat. Surgical excision of this type of lesion is not possible due to the diffuse and infiltrative nature. 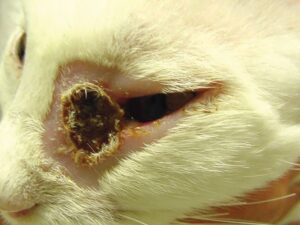 FIGURE 10. Same cat as in Figure 9, 2 weeks after having the lesion treated with cryotherapy. The eschar will continue to recede and fall off within 1 to 2 weeks.

Description. With the advent of immunohistochemical staining, tumors can be reclassified and renamed as they are investigated. This has occurred with basal cell tumors, one of the most common tumors in dogs and cats. The typical mass—benign, well-circumscribed, and previously called basal cell tumor—is now recognized as a trichoblastoma (Figure 11).5,6 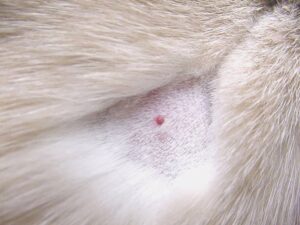 Figure 11. A 4-mm raised hairless lesion on the lateral thorax of a 10-year-old spayed female Siamese cat, diagnosed as a trichoblastoma.

The term basal cell tumor was also used as an umbrella term for a large heterogeneous group that included tumors from epidermal, trichofollicular, and adnexal tissues demonstrating basal cell characteristics. This is particularly relevant in cats, in which benign and malignant apocrine ductular sweat gland tumors and basal cell carcinomas are now recognized as having been lumped into the basal cell tumor category.

Basal cell tumors arise in middle-aged to older dogs and cats, with some dog breeds, such as poodles, being over-represented.

Diagnosis. Histopathology now differentiates among trichoblastoma, basal cell carcinoma, sweat gland tumors, and other epithelial tumors, but cytologists may still use the term basal cell tumor as a broad cytologic diagnosis covering all of these tumor types.

The cytologic diagnosis of a tumor of basal cell origin is based on small, round to cuboidal cohesive cells arranged in tight clumps or ribbons (Figure 12). Features of malignancy may be recognized and support a diagnosis of carcinoma, but histopathology is needed to determine the tumor’s malignant potential because the main criterion of malignancy is invasiveness.7,8 Thus, once cytology confirms a tumor of basal cell origin, excision, followed by histopathology, is recommended whether or not cytologic features of malignancy are seen. 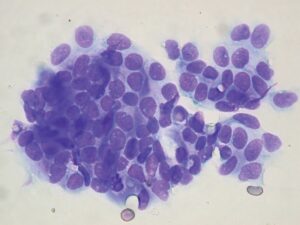 FIGURE 12. Cytology of a trichoblastoma; note the cluster of small round to cuboidal cells with small amounts of cytoplasm and relatively uniform nuclei (Diff Quik stain; magnification, 50×).

Management. Most tumors diagnosed as basal cell tumors via cytology are easily cured with narrow surgical excision. If histopathology reveals a basal cell carcinoma, complete staging, including locoregional lymph node aspiration, chest radiography, and abdominal ultrasonography, is recommended. The malignant variant of this disease is rare enough that studies evaluating chemotherapy are not available. If histology confirms a mass as malignant, chemotherapy may be of benefit.

Description. Histiocytomas affect primarily young dogs, but they may arise at any age. These tumors have not been identified in cats.

Diagnosis. Grossly, histiocytomas have a distinctive appearance: they are raised, rounded, and alopecic and have small indentations all over (“pock marked”), which create an appearance similar to the surface of a strawberry. The tumors are also described as “button-like” because of their shape (Figure 13). 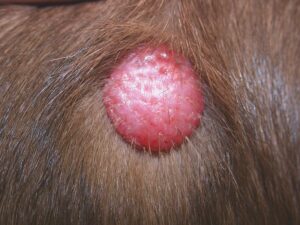 FIGURE 13. A 2-cm diameter, round, raised, mostly hairless lesion on the antebrachium of a 7-month-old castrated male cocker spaniel, consistent with the classic clinical appearance of a histiocytoma.

These benign tumors will regress on their own, often over several months’ time. As they do so, the surface may become ulcerated and intermittently bleed. Experienced practitioners may diagnose these tumors on the basis of gross appearance alone, although cytologic confirmation is suggested.

On cytology, histiocytomas are in the round cell tumor category. They may be confused with other round cell tumors, such as plasma cell tumors or poorly granulated MCTs. Despite their benign behavior, histiocytomas often exhibit cytologic features of malignancy, such as numerous mitotic figures and marked anisocytosis (Figure 14). Caution needs to be used in interpreting these features, and submission to a cytologist before alarming an owner about malignancy is recommended. 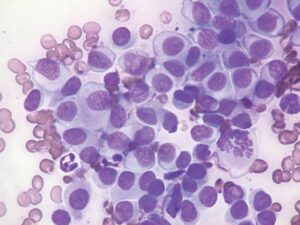 FIGURE 14. Cytology of the histiocytoma in Figure 13; note the population of round cells with moderate to large amounts of cytoplasm and distinct cytoplasmic margins (the cells look “outlined” due to clearing of the cytoplasm at the periphery). Prominent anisocytosis can be seen, as well as one mitotic figure (Diff Quik stain; magnification, 50×).

Histiocytomas can be routinely diagnosed using a combination of cytologic and gross appearance. As they begin to regress, cytology will reveal lymphocytes scattered among the tumor cells.

Management. Excision is generally not needed. It may be recommended if the patient is going to be under anesthesia for a different procedure, such as an ovariohysterectomy, or if the tumor is not regressing over time or begins to grow.

Cytology provides a quick and minimally invasive way to evaluate cutaneous tumors in dogs and cats. It may provide a definitive diagnosis and can, thus, help the clinician to determine whether further staging tests, such as lymph node aspiration or chest radiography, are indicated. Even more important, a cytologic diagnosis can help determine the width of the surgical margins needed for complete excision, based on the biologic behavior of the tumor type identified. This preoperative information helps clients avoid the excess expense of follow-up treatment for a dirty margin, and patients the excess morbidity of a wide surgical excision that could have been more conservative.

Thus, cytology on cutaneous masses assists the clinician in patient assessment, may decrease discomfort for the pet, and may actually make the treatment less expensive for the client, with better outcomes for all.