Leo Londoño, DVM, DACVECC, is a clinical assistant professor of emergency and critical care and director of the hemodialysis unit at University of Florida. He received his DVM from UF and completed his residency in emergency and critical care at UF after completing a rotating internship at Hollywood animal hospital in south Florida. His research interests include renal and non-renal applications of extracorporeal purification techniques, endothelial and glycocalyx pathophysiology in the critically ill, and hospital-acquired acute kidney injury.

Sodium is the principal extracellular cation in dogs and cats and is primarily responsible for maintaining serum osmolality.4 It is generally maintained within a relatively narrow range in dogs and cats, despite large variations in both sodium and water intake.2-4 The kidney regulates sodium balance through various mechanisms, including the renin-angiotensin-aldosterone system, neurohormonal mechanisms, and atrial and brain natriuretic peptides.2-4

Serum osmolality is determined by the concentrations of sodium, urea, and glucose. However, only sodium and glucose are considered effective osmoles, meaning they do not freely cross cell membranes.2,3 “Pseudohyponatremia” describes hyponatremia in a patient with a normal or increased serum osmolality. This can occur in patients with hyperlipidemia, hyperproteinemia, or hyperglycemia or after mannitol infusion.2,3 The most common cause of pseudohyponatremia in veterinary patients is hyperglycemia secondary to diabetes mellitus.2 Because glucose is an effective osmole, hyperglycemia can precipitate an increase in extracellular fluid water, causing a dilutional decrease in serum sodium concentrations.2,3 In people with hyperglycemia, each 100-mg/dL increase in glucose decreased serum sodium concentrations by 1.6 mEq/L up to blood glucose concentrations of 440 mg/dL, but correction was even greater at higher blood glucose concentrations.5

For example, a diabetic patient with a blood glucose concentration of 1000 mg/dL and a “normal” measured serum sodium concentration of 150 mEq/L has a corrected serum sodium of 164.4 mEq/L, assuming a normal serum glucose of 100 mg/dL. This situation raises concerns for hyperglycemic hyperosmolar syndrome (HHS), an uncommon form of diabetic crisis characterized by severe hyperglycemia (glucose level ≥ 600 mg/dL), minimal to absent urine ketones, and serum osmolality in excess of 350 mOsm/kg.2 HHS must be rapidly recognized because treatment and prognosis differ from those for dogs presenting with diabetic ketoacidosis.2,6-9 Treatment of HHS should be tailored to slowly decrease blood glucose and sodium in order to prevent cerebral edema and neurologic deterioration. Recommended rates of sodium decrease are 10 to 12 mEq/L per 24 hours or 0.5 to 1 mEq/L per hour;10 for glucose, decreases of no more than 50 to 75 mg/dL per hour are recommended.3

Potassium is the primary intracellular cation in mammalian cells, with 95% to 99% of total-body potassium located within cells.10,11 The most important role of potassium is in maintaining resting membrane potential, which determines a cell’s degree of excitability.10 Potassium disorders are among the most frequent electrolyte disturbances in human and veterinary patients and can be life-threatening when severe.10,12

Pseudohyperkalemia is an artifactual increase in potassium caused by several factors. In veterinary patients, thrombocytosis or leukocytosis may result in pseudohyperkalemia.10,11 Hemolysis may also result in pseudohyperkalemia, particularly in neonates and Japanese breeds of dog, in which potassium concentrations in red blood cells are higher than those of normal adult canines. Additionally, dogs with phosphofructokinase deficiencies may exhibit pseudohyperkalemia in the presence of hemolysis.11 Finally, incorrect order of blood draw can result in sample contamination with potassium ethylenediaminetetraacetic (EDTA), leading to pseudohyperkalemia.14 For this reason, we recommend that when blood samples are collected, blood tubes be filled in the following order: first, red top (for serum collection); next, green top (containing citrate); and finally, purple top (containing EDTA).

Potassium disorders are among the most frequent electrolyte disturbances in human and veterinary patients and can be life-threatening when severe.10,12

Artifactual or pseudohyperkalemia may mask true hypokalemia in the aforementioned situations. For patients exhibiting clinical signs consistent with hypokalemia and existing pathology that may lead to such electrolyte derangement, reported “normal” potassium values should be reassessed by collecting blood in a heparinized tube to determine plasma potassium concentration because this should not be affected by platelet or white blood cell numbers.11 Care should also be taken to avoid contamination of the sample with EDTA in these cases.

In cases of upper or lower urinary tract obstruction, normal or borderline-high potassium concentrations may give the false impression of a normal potassium balance, but veterinarians should know that the obstruction causes decreased excretion of potassium. Unilateral ureteral obstruction may pose an even greater challenge in determining normal electrolyte physiology because many of these cases may go underdiagnosed due to lack of azotemia and lower urinary tract signs. Once patency of the urinary tract is restored, either surgically or via urinary catheterization or stent placement, the clinician should be aware of and closely monitor the effects of postobstructive diuresis on serum potassium and magnesium. Lack of effective monitoring of urine output and electrolytes may lead to hypokalemia and worsening renal function due to intravascular volume depletion.

Magnesium is a cation that has garnered increasing attention in both human and veterinary medicine over the past 50 years.15 In the 1950s, Vitale et al. discovered a link between magnesium deficiency and uncoupling of oxidative phosphorylation. Since then, magnesium has been recognized as essential to many metabolic functions, including via its role as a coenzyme for the membrane-bound sodium-potassium adenosine triphosphatase pump.15-17 Magnesium is also important because of its role in protein synthesis, vascular smooth muscle tone, activation of T cells, depolarization of myocardial cells and neurons, and production of intracellular second messengers, such as cyclic adenosine monophopshate.15-17

Magnesium is primarily an intracellular cation; 99% is contained within the cells and less than 1% is found in extracellular fluid.15,16 Serum magnesium exists in three forms: ionized (55% to 65%); protein-bound, primarily to albumin (30% to 40%); and complexed to anions, such as citrate, phosphate bicarbonate, lactate, or sulfate (4% to 6%).15,16,18 Most total-body magnesium is found in bone, and homeostasis is regulated by a balance between renal excretion and intestinal absorption.1 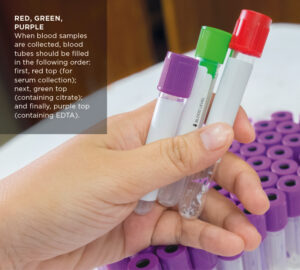 Reduction of total or ionized magnesium indicates hypomagnesemia and may warrant supplementation. However, a normal total or ionized serum magnesium concentration does not always imply normal total-body stores because only 1% or less of total-body magnesium is found in the extracellular compartment.15,16 For people in whom magnesium deficiency is suspected but not documented, a magnesium loading test is recommended if renal function is normal. This test measures the body’s retention of magnesium and therefore reflects the degree of deficiency.15 A similar test has not been described in veterinary patients, so it is important to recognize patients at risk for magnesium disorders and understand that intervention may be warranted even with a normal serum magnesium concentration. Magnesium supplementation should be considered during the management of patients with diabetic ketoacidosis, refractory ventricular arrhythmias, refractory hypokalemia, and renal disease.

Fluid and electrolyte therapy should be tailored to each individual patient and doses calculated as is done with the administration of any drug.

Electrolyte disturbances commonly occur in dogs and cats and may carry varying degrees of significance. Certain disorders are associated with increased risk for morbidity and mortality, so it is important to identify and promptly treat electrolyte abnormalities that may be associated with adverse outcomes.20 Fluid and electrolyte therapy should be tailored to each individual patient and doses calculated as is done with the administration of any drug. Veterinarians have traditionally approached fluid therapy by considering the volemic status of the patient and correcting volume deficits but have paid less attention to ongoing electrolyte abnormalities and administration of electrolyte-balanced solutions to critically ill patients. However, identification of these electrolyte disturbances can be complicated by endogenous or exogenous factors. In particular, failure to identify clinically significant alterations in sodium, potassium, and magnesium may be detrimental to patient care. Thus, clinicians must consider the entire clinical picture when evaluating laboratory results in order to minimize chances of inappropriate management.