A cat’s job in life is to question all the rules and make us—veterinarians and pet owners—scratch our heads and puzzle over why they are acting a certain way or doing the things they do.

It’s not unusual for cats to bring a slight grin to our faces when we realize, yet once again, they have led us on a convoluted diagnostic pathway until we finally reach the diagnosis. How many owners come into your clinic with a bald cat and the opening statement, “I never see Mr. Meow itching or licking—I just come home from work and he’s lost more hair!”

The goal of this article is to provide tools to use in everyday practice, specific disease components to recognize, and tips to help identify the right diagnosis when we are faced with feline dermatologic challenges.

EVALUATION BASED ON FELINE PRURITUS

Clinical signs of pruritus in cats are obvious:

But what about cats whose only clinical evidence is alopecia, and whose owners never witness them grooming? For these cats, the best plan is to approach the case similarly to the way you would approach a case of feline pruritus, even if the pruritus itself is not the primary presenting complaint.

In many feline pruritus cases, the causes can be broken down into a few categories. If you evaluate the patient based on these categories, a diagnosis can be made greater than 90% of the time.

Psychogenic alopecia is frequently misdiagnosed because the diagnosis is based solely on the clinical appearance of the cat (symmetrical alopecia with no visible signs of erythema, papules, pustules, or scale). However, remember that excessive grooming is more often a result of pruritus than an obsessive-compulsive disorder.

In a recent study, 21 adult cats with a presumptive diagnosis of psychogenic alopecia were referred to a behavioral service.1 In 19 cats, a cause of pruritus was identified: adverse food reaction was the most common cause, followed by parasitism, flea allergy dermatitis, atopy, and hyperthyroidism.

Therefore, psychogenic alopecia is a diagnosis of exclusion, which should only be considered after all other causes of pruritus have been eliminated. 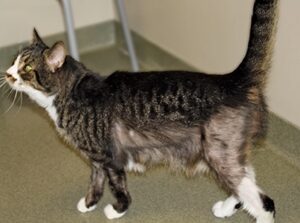 Figure 1. Buster, a 14-year-old neutered male domestic shorthair, with a 4-month history of intense pruritus. Buster was 1 of 9 cats in the household. Five months prior to presentation, a new cat from a shelter had been introduced into the home. See Figure 2 for diagnosis.

Begin with diagnostic tests that will rule out both external and internal parasites and, thus, decrease the need for other tests (Figure 2): 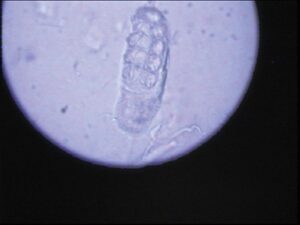 Superficial skin scrapings are needed for the identification of Demodex gatoi, Cheyletiella, and Notoedres mites because these mites reside on the surface or superficial layers of the skin. Cheyletiella mites, also referred to as “walking dandruff,” can also be found via a good flea comb or acetate tape prep.

A parasite “vacation” is recommended for all pruritic or alopecic cats, even those that are not perceived as pruritic by their owners. Remind owners that the absence of parasites during initial examination and diagnostics does not eliminate them from the differential list. See Table 1 for a list of products to use for parasite elimination.

A strict dietary elimination trial for cats consists of providing a novel protein, hydrolyzed protein, or home-cooked diet exclusively for 10 to 12 weeks. Educate the owner to:

Make the owner aware that the potential for hepatic lipidosis exists in “picky eater” cats:

Food trials are not truly complete until the cat has been challenged with the previous food and the clinical signs recur. However, some owners will be resistant to discontinuing the new diet if the cat’s clinical signs have resolved.

The Challenges of Home-Cooked Diets

A home-cooked diet composed of a single protein source and a single carbohydrate source is still considered the “gold standard” of dietary trials. Home-cooked diets limit the chance of contamination with other proteins or additives.
However, there are several factors that make home-cooked diets less than desirable:

For these reasons, I prefer to use a prescription novel protein or hydrolyzed protein diet during the dietary trial.

It is important to realize that neither intradermal skin testing nor IgE serology is used to diagnose atopy. Rather, diagnosis is determined by clinical history and ruling out other causes of pruritus. 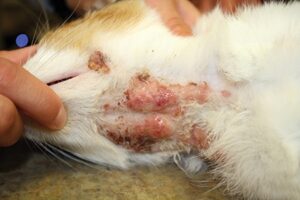 Figure 3. Brandi, 3-year-old spayed female domestic shorthair, with a 6 month history of persistent head and neck pruritus. There was no improvement in pruritus after parasite control and 10-week dietary elimination trial. 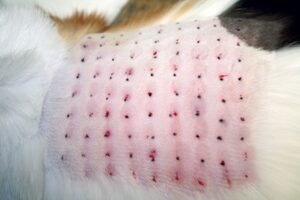 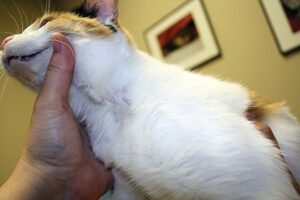 It is important for pet owners to understand that ASIT does not:

Cats Are Not Dogs

Some of the symptomatic therapies used in dogs, such as frequent cool water baths, menthol, and witch hazel sprays, are not well tolerated by their feline counterparts. In addition, prolonged use of topical corticosteroids, such as betamethasone, triamcinolone, and dexamethasone, can lead to severe adverse effects, including permanent skin thinning and fragility.

Therapy for pruritic cats is aimed at:

“Symptomatic” therapies range from use of omega-3 fatty acids and antihistamines to corticosteroids and cyclosporine.

Antihistamines alone may be useful for mild pruritus (particularly atopy), but are most useful as part of combination therapy, such as use with fatty acids, to reduce the amount of corticosteroid required.

As in humans, failure to respond to one antihistamine does not mean the patient will not respond to another one. It may be necessary to formulate an antihistamine trial, in which the owner tries different antihistamines for 2 weeks each in order to find one that may provide some relief.

Corticosteroids are often the most effective method of providing immediate relief from pruritic signs. The key is to use the least amount needed to provide relief for the shortest period of time. Long-term corticosteroid use can have significant adverse effects in cats, including increased risk for diabetes and cutaneous skin fragility syndrome.5

Cats lack the enzymes to consistently convert prednisone to its metabolically active form, prednisolone. Therefore, always use prednisolone or methylprednisolone, specifically, in cats. Although oral triamcinolone and dexamethasone are acceptable for short-term use in cats, a recent study supports that dexamethasone had higher diabetogenic effects compared to prednisolone.6

Although cyclosporine has not been rigorously evaluated for long-term use in cats for the treatment of allergic skin disease, it appears to be a safe and attractive option for owners who:

Cyclosporine therapy has also become a more attractive option for owners due to the introduction of feline Atopica (ah.novartis.us). The liquid formulation provides ease of administration and flexibility in dosing, and it may be administered with food.

Because fatal systemic toxoplasmosis has been reported,7 avoid cyclosporine use in cats with high risk for toxoplasmosis (eg, cats that hunt). Contraindications for use include demodicosis, neoplasia, dermatophytosis, and systemic fungal infection.

As stated earlier, the goals of ASIT are to:

Hyposensitization provides a safe option for long-term treatment of atopy in cats, with response rates ranging as high as 70% to 80% in this species.8

Immunotherapy, also referred to as hyposensitization therapy or allergy vaccine, refers to a mix of allergens administered via subcutaneous injection or sublingual drops, in progressively increasing doses.

Identifying the underlying cause of pruritus via a thorough history, recognition of clinical signs, and appropriate diagnostics is crucial to implementing a successful long-term treatment regimen for the feline patient.

Successful management of an atopic cat often requires a multimodal approach: Some therapies are long-term (ASIT), while others are used to treat acute flare-ups (glucocorticoids) or address secondary bacterial or superficial fungal infections. Systemic therapy is often combined with topical therapy for the best outcome.

Lori Thompson, DVM, Diplomate ACVD, is the co-owner of Animal Dermatology Clinic Indianapolis, in Indianapolis, Indiana. Dr. Thompson’s clinical interests include allergic skin and respiratory disease, equine dermatology, and immunomodulatory therapies; she lectures nationally on these topics and is the author of several peer-reviewed articles. In addition, she is active in volunteer work and organized veterinary medicine. Dr. Thompson is the immediate past president of the Indiana Veterinary Medical Association and a past recipient of the ACVD Resident Research Award and Bastien Award for Excellence in Canine Care.