Treating Canine Superficial Pyoderma in the Era of Antimicrobial Resistance

Dr. Koch is a professor of dermatology at the University of Minnesota College of Veterinary Medicine. She obtained her DVM degree at the Federal University of Mato Grosso do Sul, Brazil. She also obtained a Master of Science degree in veterinary dermatology at the University of Minnesota, where she completed a residency in veterinary dermatology. She is the author of Canine and Feline Dermatology Drug Handbook as well as many scientific articles and book chapters. She serves as scientific advisor and editor for several journals and has presented at many national and international conferences. Her professional interests include allergies, otic diseases, autoimmune disorders, multidrug-resistant infections, and equine dermatology.

The rise of antimicrobial resistance requires veterinarians to shift their approach in treating bacterial skin infections, particularly in regard to the use and selection of systemic antimicrobials. Specific antimicrobial guidelines and clinical consensus on treating bacterial skin infections have been developed by the International Society for Companion Animal Infectious Diseases (ISCAID, iscaid.org) and the World Association for Veterinary Dermatology (WAVD, wavd.org) to help veterinarians adequately diagnose and treat pyoderma, using judicious antimicrobial therapy to prevent bacterial resistance.1,2 To treat canine pyoderma successfully, it is important to recognize its clinical signs, confirm the infection, and identify and treat any underlying cause to help prevent pyoderma recurrence.

Bacteria that Cause Superficial Pyoderma 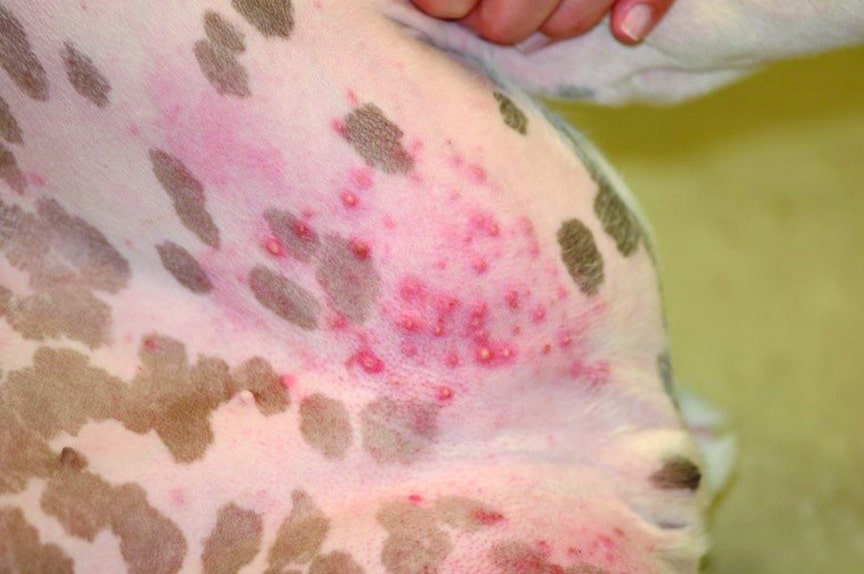 Figure 1. Papules and pustules on the inguinal and medial thigh area of a dog. 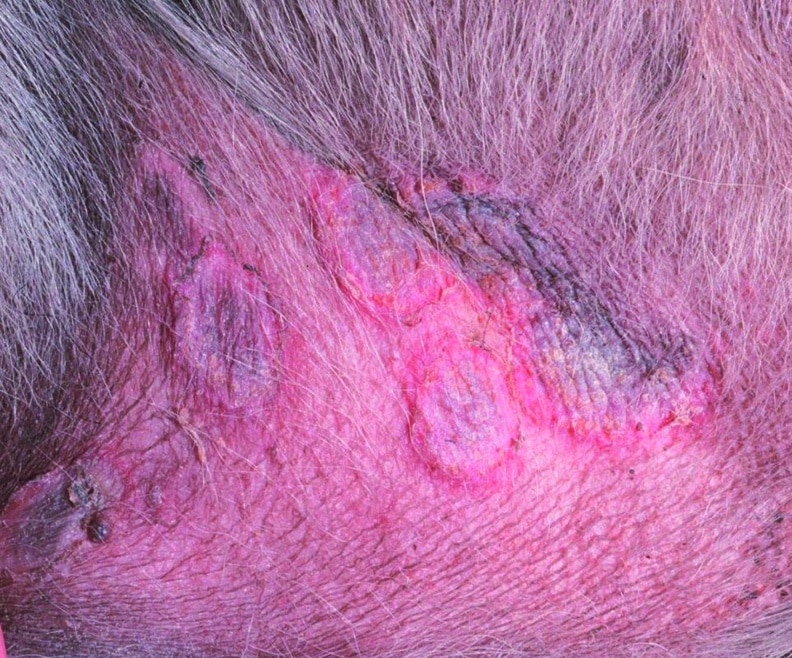 Figure 2. Epidermal collarettes on the ventral abdomen of a dog. 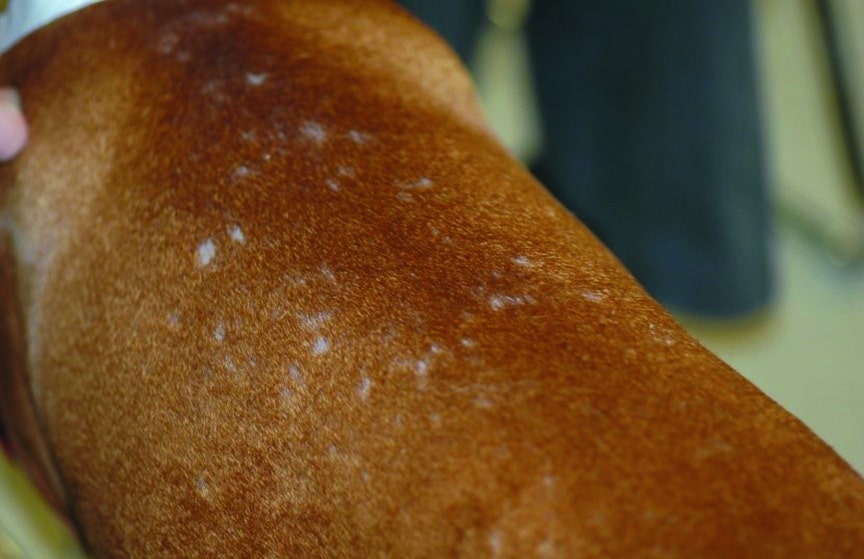 Figure 3. Moth-eaten alopecia on the dorsum of a dog.

The first step in treating superficial pyoderma properly is to confirm the diagnosis. The diagnosis includes recognition of the typical clinical signs, the exclusion of other similar conditions, and confirmation via skin cytology, plus or minus bacterial culture and susceptibility testing.3 This approach helps prevent inappropriate use of antimicrobial therapy for skin diseases that are not associated with pyoderma.

Other causes of folliculitis and pustular disease should be considered, including demodicosis, dermatophytosis, sterile pustular diseases such as pemphigus foliaceus (FIGURE 4), and sterile neutrophilic or eosinophilic pustulosis. Appropriate diagnostic tests, such as skin scrapings, trichogram, fungal culture, and skin biopsy, should be performed to rule out these conditions. 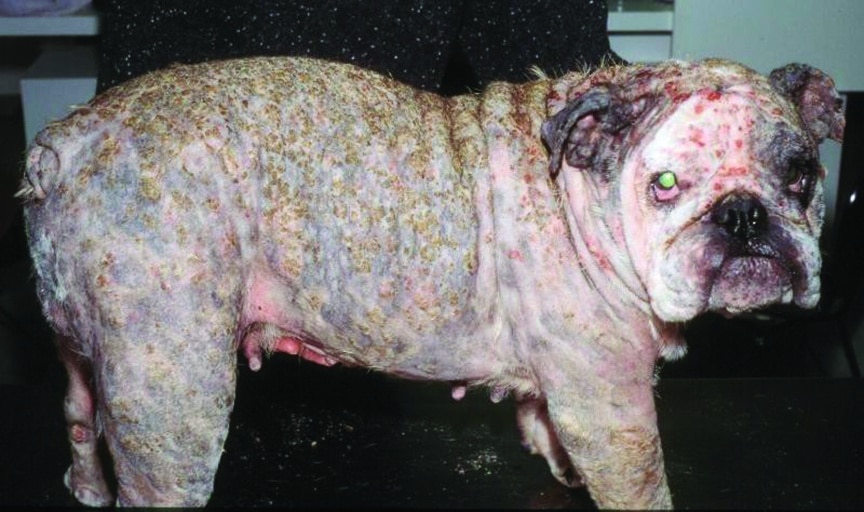 Skin cytology is the most important diagnostic test for canine pyoderma; however, it is still underused. Before antimicrobials are administered, the diagnosis of superficial pyoderma needs to be supported by cytologic findings demonstrating coccoid bacteria, often associated with inflammatory cells (typically degenerate neutrophils) and, when present, bacteria phagocytosis (FIGURE 5). Cytology is also very important for identification of co-infection with other microorganisms such as Malassezia pachydermatis and, less commonly, rod-shaped bacteria. 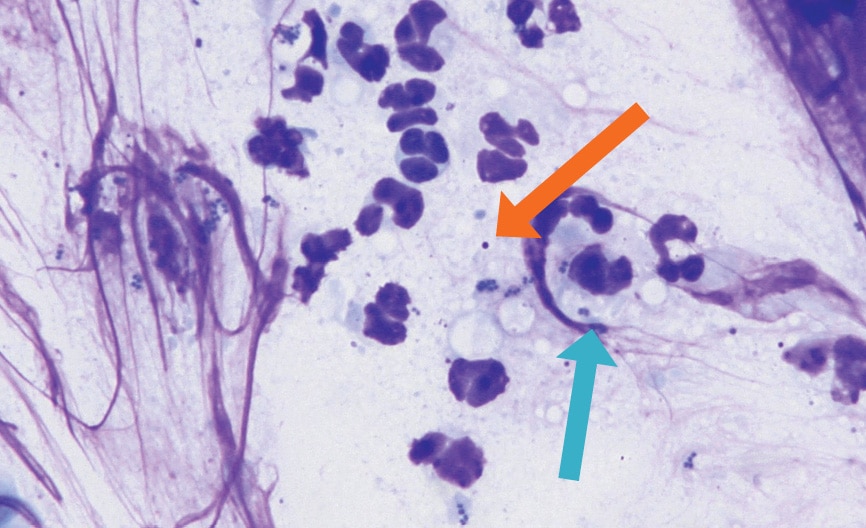 Bacterial culture and susceptibility testing is a very important diagnostic tool for identification of the bacteria involved and selection of appropriate antimicrobial therapy (BOX 1), especially when considering systemic antibiotics. The need for this test has increased with the emergence of MDR infections in veterinary medicine. Ideally, samples should be taken from pustules. If pustules are not present, samples may be collected from exudate beneath crusts, epidermal collarettes, and, if needed, from papules (by rupturing the papules with a 22-gauge needle). There is no current indication that use of antimicrobials affects isolation of causative bacteria in canine superficial pyoderma; therefore, samples may be collected for culture whenever indicated, regardless of administration of antimicrobials.

BOX 1 When to Perform Bacterial Culture and Sensitivity Testing

There is no gold standard or “one size fits all” method of treatment. The treatment must be tailored to each patient. The type of therapy selected should be based on the nature of the disease, the severity and extent of the lesions, concurrent diseases, any other administered drugs, the ability of the owner to administer topical and systemic therapy, and the owner’s compliance and financial situation, in addition to any known or expected antimicrobial resistance.

Shampoos, mousses, lotions, wipes, sprays, and rinses containing antiseptics such as chlorhexidine (commonly used by the author), benzoyl peroxide, ethyl lactate, hydroxyl acids (i.e., acetic acid, lactic acid, and malic acid), and hypochlorous acid may be used 1 to 3 times weekly up to daily for resolution of localized and generalized lesions, as well as for maintenance to help prevent recurrence of infection. A contact time of at least 5 to 10 minutes is important for optimal efficacy of antimicrobial shampoos. These products may also be used for maintenance to help prevent infection in cases of common pyoderma recurrence. 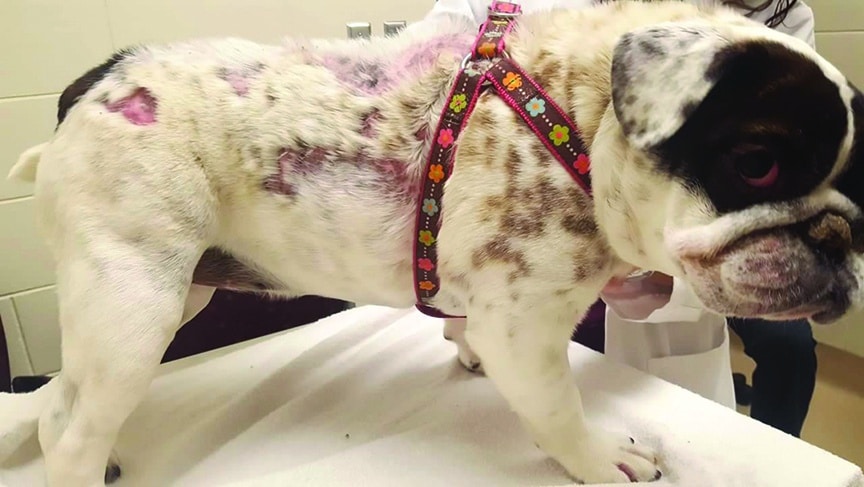 Figure 6. (A) Dog with superficial pyoderma along the dorsum before topical therapy with chlorhexidine shampoo and mousse. 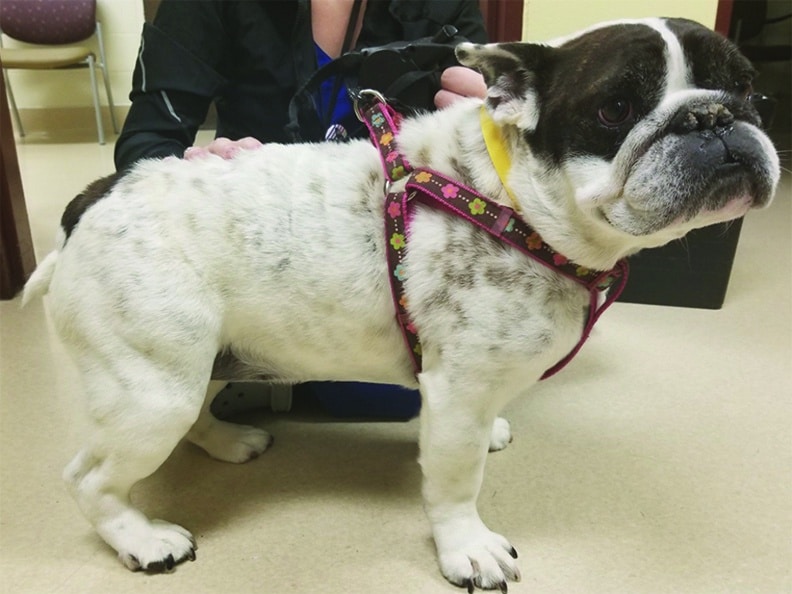 Figure 6. (B) Same dog with complete resolution of the pyoderma after topical therapy.

Ointments, creams, gels, and sprays containing gentamicin, bacitracin, neosporin, silver sulfadiazine, hydroxyl acids, or fusidic acid (not available in the United States) can be used 2 to 3 times daily in combination with baths or on non-bath days. These topical antibiotic therapies should be used until complete resolution of the skin infection.

Mupirocin, a carboxylic acid ointment, is highly effective against MRS skin infections and can be used for localized treatment; however, the author uses mupirocin only in resistant cases, when other topicals are not effective or demonstrate resistance in vitro, as this is the most important topical antimicrobial used to treat methicillin-resistant S aureus (MRSA) in humans. In the author’s opinion, topical fluoroquinolones should not be used empirically and should also be saved for more resistant cases if other topicals are not effective.

Skin infections associated with significant inflammation may benefit from short, limited courses of topicals containing glucocorticoids such as hydrocortisone, betamethasone, mometasone, or triamcinolone; however, care should be taken with these products, as chronic use of topical glucocorticoids can induce adverse cutaneous reactions (e.g., atrophic skin, wounds).

It is very important to educate pet owners about how to correctly apply topical therapy and maintain the correct schedule for the recommended duration.

The clinical consensus guidelines of the WAVD state that empirical drug selection for systemic therapy is always contraindicated when a multidrug-resistant infection is suspected based on historical factors, due to the high prevalence of multidrug resistance within these strains.2 The ISCAID guidelines, last updated in 2014, outline 3 tiers of antimicrobials and their recommended use for canine superficial pyoderma.1 Clinical use by veterinary dermatologists may vary from these guidelines. The author, based on experience and other publications,5-7 modifies the ISCAID tiers for more strict antimicrobial stewardship (BOX 3).

First-tier antimicrobials are those that can be used empirically (without culture and susceptibility testing in dogs with no or rare previous antimicrobial exposure) for cases of superficial pyoderma. Many dermatologists first select cephalexin or cefadroxil for empiric treatment of superficial pyoderma, with the second choice typically being amoxicillin clavulanate. Potentiated sulfonamides are often efficacious against S pseudintermedius; however, they can have many side effects (e.g., hypothyroidism, keratoconjunctivitis sicca, hypersensitivity reaction in certain breeds), especially when given for a long period of time.

The ISCAID guidelines include clindamycin and lincomycin in the first tier of antimicrobials.1 The author prefers to reserve these agents for second-tier use based on culture and susceptibility testing when other choices, such as cephalosporins, are not options. Several published reports, including one in dogs,6 recommend the use of clindamycin only based on culture and susceptibility results due to a phenomenon called MLSB (macrolide-lincosamide-streptogramin B) that is associated with cross-inducible resistance among macrolides. Therefore, when considering the use of clindamycin, it is important to verify that all tested macrolides show in vitro susceptibility.

Chloramphenicol, rifampin, and aminoglycosides are often last-resort options for MDR staphylococcal infections, mostly due to more severe potential adverse effects. Chloramphenicol and rifampin can be used safely in most dogs; however, close monitoring for potential aplastic anemia and liver toxicity, respectively, is needed. Historically, rifampin was used in combination with other antimicrobials (e.g., doxycycline) due to concern with development of fast resistance; however, polyantimicrobial systemic therapy should be avoided due to potential for more resistance. Additionally, a recent study showed that rifampin, used as monotherapy, was shown to be efficacious in almost 72% of dogs with MDR methicillin-resistant Staphylococcus pyoderma;8 however, patients should be carefully monitored for resistance during treatment, especially when several months of treatment are needed.

Third-tier antimicrobials (fluoroquinolones) should only be used when in vitro susceptibility is demonstrated and first- and second-tier antimicrobials are not effective.7 The author considers these antimicrobials as last options for treating canine pyoderma, unless they need to be selected for safety reasons for the patient. Ciprofloxacin should not be used because of its reported poor absorption and bioavailability in dogs.

Fourth-tier antimicrobials should not be used in veterinary medicine, particularly with regard to routine cases of superficial pyoderma. They should be reserved for the treatment of severe MRSA infections in humans.

General Guidelines for Systemic Antimicrobial Use

Using the correct dose, frequency of administration, and duration of antimicrobials is crucial for a successful outcome when treating any infection. Antimicrobials given more frequently than once a day (e.g., cephalexin, clindamycin) are called time dependent. To be effective, their concentration at the infection site must be above the minimal inhibitory concentration (MIC) of the bacteria, ideally for the duration of the administration interval, but at least 75% of that time is acceptable. Time-dependent antimicrobials should not be given less frequently than the recommended interval, and increasing their dose does not necessarily increase efficacy.

Subtherapeutic doses of systemic antimicrobials, including pulse therapy protocols, are currently strongly discouraged as they are likely to promote antimicrobial resistance.

Recommended doses of systemic drugs for canine superficial pyoderma have been published in the ISCAID guidelines1 and elsewhere.

The typical duration of treatment for superficial pyoderma is 3 to 4 weeks, but more time may be needed. It is currently recommended by veterinary dermatologists to treat superficial pyoderma until 1 week after complete clinical resolution of the infection. Patients with pyoderma should always be reevaluated by the veterinarian, who should not rely solely on the owner’s perception to determine if the bacterial infection has resolved. To prevent frequent recurrence of superficial pyoderma, it is crucial to try to identify and control the underlying primary disease (e.g., allergy, endocrinopathy) that typically predisposes dogs to pyoderma. Follow-up visits are very important for evaluation of the response to therapy and to decide when to discontinue the antimicrobial. FIGURE 7 shows the author’s follow-up and treatment protocol. 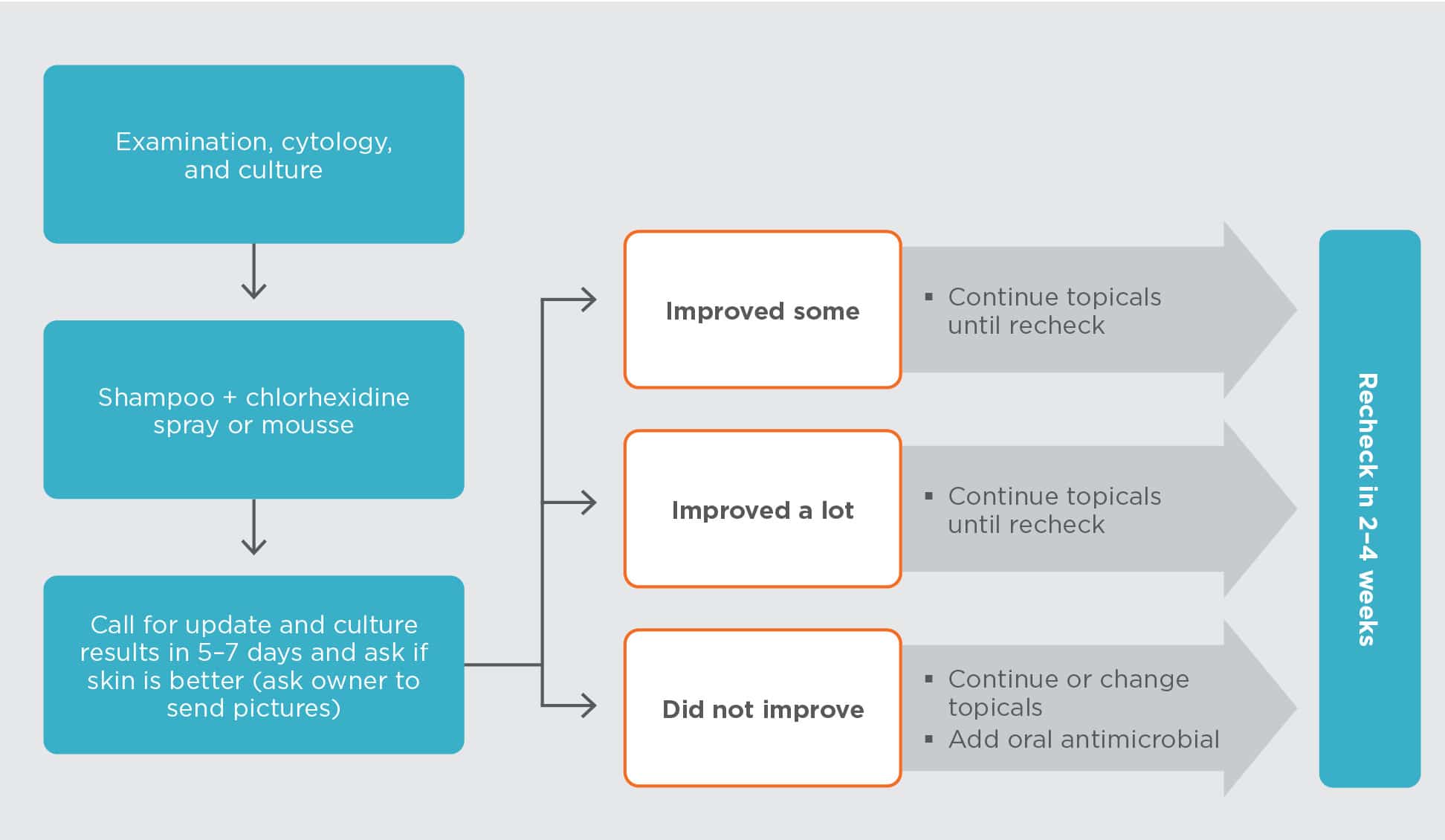 Owner adherence to the recommended treatment regimen is crucial for treatment success and prevention of bacterial resistance. Educating clients about their pet’s pyoderma and treatment has been shown to improve compliance. Additionally, owners should be educated about the need to avoid or minimize systemic antimicrobial use so they can be part of the solution to the global fight against antimicrobial resistance.

A Clinical Approach to Alopecia in Cats