Estrus in a Spayed Cat 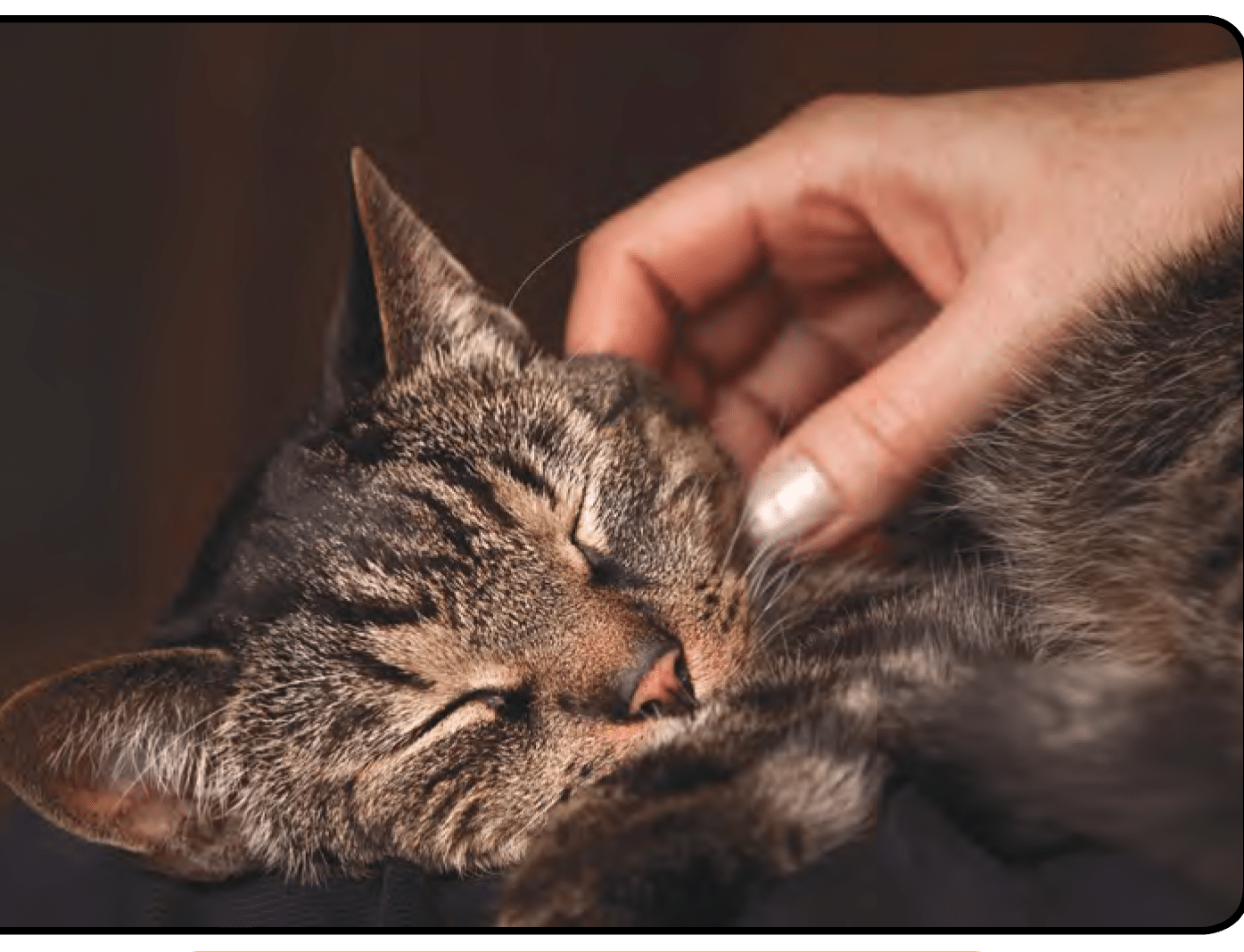 An aging spayed female cat is presented with signs typical of estrus. A history, physical examination, and extensive diagnostics are performed. Can you determine the diagnosis?

The cat had a body condition score of 4/9, with a consistent weight history over the past year. Rectal temperature, heart rate, and respiratory rate were within normal limits. Abdominal palpation and examination of external genitalia were unremarkable; no vaginal discharge was observed.

The initial laboratory database included a complete blood count, serum biochemistry, electrolytes, total thyroxine (T4), and urinalysis and culture. The only abnormalities were:

Ultrasound of the urinary bladder did not reveal masses, uroliths, or thickening or irregularity of the bladder wall.

A diagnosis of urinary tract infection was considered pending culture results, and an empirical trial of marbofloxacin (25 mg PO Q 24 H for 10 days) was initiated. The owner was instructed to report if no improvement was observed within 72 hours.

Four days later, the cat was presented again with continued signs of estrus. According to the owner, no improvement in the cat’s behavior had been observed.

Because increased estrogen levels trigger a negative feedback mechanism that results in reduced luteinizing hormone (LH) levels, a serum sample was submitted for LH analysis. Results were < 1 ng/mL, suggesting the presence of an endogenous or exogenous source of estrogen.

One week following initial presentation, the cat was still exhibiting signs of estrus.

Question: What are the differential diagnoses for this case?

Considering the information provided, what differential diagnoses would you pursue?

Answer: Differential diagnoses to consider include:

At this point—1-week following initial presentation—the owner disclosed that she was prescribed transdermal hormone replacement therapy (HRT) containing estradiol, progesterone, and dehydroepiandrosteron (DHEA) in emu oil. The owner described a daily routine of applying the cream to her forearms and, shortly thereafter, picking up and cradling the cat for several minutes. The owner began using the medication approximately 12 days before the cat’s initial presentation to the clinic.

A therapeutic trial of megestrol acetate (5 mg PO Q 24 H) was initiated because this drug has been used to terminate estrus. Megestrol is a synthetic progestin that exerts an inhibitory effect on the secretion of pituitary gonadotropins.

Two days later, the cat’s signs of estrus were resolved and therapy was discontinued.

The pharmacokinetics of estradiol in companion animals are largely unknown. Estrogens and their metabolites accumulate in adipose tissue, are excreted into urine and bile, and those in bile are reabsorbed by the gastrointestinal tract, which may explain the persistent, increased estrogen levels observed in this case.

The owner is currently using a sublingual route of HRT administration to eliminate exposure of the cat to the medication. According to the owner, all previously reported signs of estrus have resolved, and the patient has not exhibited any signs for over 12 months.

A weakness in this case’s workup was failure to visualize the right adrenal gland on ultrasound. An estrogen secreting tumor could have been missed if one was present.

When a cat’s right adrenal gland is healthy, it is difficult for even board-certified radiologists to identify; however, the presence of an adrenal tumor increases the organ’s size, which makes it easier to locate.

We believe that the presence of an adrenal tumor can be ruled out because the cat remained estrus-free for 12 months following discontinuation of the owner’s transdermal hormone use.

Hyperestrogenism and estrogen toxicity in pets due to exposure to human HRTs are a growing veterinary medical concern.

More than 100 suspected cases are reported anecdotally, with most involving canine patients.4 Despite the existence of this phenomenon, we are aware of but 1 single case reported in the literature.5 To our knowledge, no feline cases have been reported.

The danger of exposing children and other family members to HRTs has been acknowledged and was explained to the owner by her physician. Awareness of the issue has increased due in part to recent attention by the United States Food and Drug Administration.6,7 However, physicians typically do not warn patients about the potential dangers of exposing pets to these hormones.

Chronic exposure to high doses of endogenous estrogens is toxic to mammals. Susceptibility to estrogen toxicity in cats is greater than it is in dogs, ferrets, rats, and mice.8

Prolonged hyperestrogenism in the cat is associated with:8,9

As in the bitch, cats may be at risk for coagulopathies and stump pyometra secondary to pancytopenia induced by hyperestrogenism.

Diagnosis of exposure to exogenous estrogens and subsequent hyperestrogenism in the feline patient is confounded by the difficulties in detecting estrus in the species.

Dogs Versus Cats. In the bitch, estrus is diagnosed by several distinct signs, including vulvar enlargement, vaginal hemorrhage, and perivulvar alopecia. However, the feline vulvar labia do not respond to estradiol and, therefore, do not typically change appearance during estrus as in the bitch.10

Feline Behavior. Feline behavioral signs, such as rolling, head rubbing, hindlimb treading, posturing, vocalization, and permitting mounting by male cats, are generally the only indication of estrus in queens.11 Although these changes may be quite dramatic in some individuals, in others, they may be difficult to distinguish from normal affectionate behavior.

Vaginal Cytology. Estrus in the bitch is easily confirmed by vaginal cytology, but it is not a routine diagnostic tool used in feline medicine given the anatomic limitations of the feline vagina.10

Diagnostics in this Case

One could take the position that vaginal cytology should be performed in cats with the history and clinical signs seen in this case. It could even be argued that it was a significant oversight. However, we chose not to perform vaginal cytology based on its cited limitations.10 Instead, documentation of very elevated serum estradiol concentrations confirmed that the clinical signs were due to estrus.

To eliminate any doubts regarding the cause of this patient’s signs, a trial of re-exposure to the transdermal cream with documentation of identical signs would be ideal, however, impractical. Further testing for potential ovarian remnant syndrome with GnRH-induced ovulation and subsequent measurement of serum progesterone was declined by the owner due to resolution of clinical signs.

Erin O. Dresner, MS, DVM, is currently completing a small animal rotating internship at North Houston Veterinary Specialists in Spring, Texas. She received her DVM from Western University of Health Sciences College of Veterinary Medicine in 2012. Prior to her veterinary education, Dr. Dresner completed an MS focused on parasitology at Texas State University. Her clinical and research interests include feline internal medicine and infectious disease.

Gary D. Norsworthy, DVM, Diplomate ABVP (Feline), is the owner of Alamo Feline Health Center in San Antonio, Texas, where he practices full time. His 40 years of private practice include 15 years specializing in feline medicine. Dr. Norsworthy also holds adjunct professorships in clinical medicine at Mississippi State University and Western University of Health Sciences. He has lectured to veterinary associations on feline topics in the United States, Canada, Brazil, and Australia and is the editor of 6 feline textbooks. Dr. Norsworthy received his DVM from Texas A&M University.