Evaluation After Tibial Plateau Leveling Osteotomy: A Guide for the General Practitioner

Dr. Deabold is a sports medicine and rehabilitation/integrative medicine resident at the University of Florida. She received her DVM degree from St. George’s University in Grenada and completed a small animal rotating internship at Pittsburgh Veterinary Specialty and Emergency Clinic, BluePearl. She has diverse clinical interests and a special interest in management of canine osteoarthritis, neurologic diseases, and postoperative rehabilitation.

Rupture of the cranial cruciate ligament (CCL) is one of the most common causes of hindlimb lameness in dogs. The CCL acts as the primary stabilizer of the canine stifle, resisting cranial tibial translation (cranial drawer), hyperextension, and internal rotation. It also contains mechanoreceptors and proprioceptors and thus contributes to hindlimb proprioception. CCL tear or rupture (CCLR) leads to stifle instability, pain, inflammation, and development of osteoarthritis.1

One of the most commonly used and successful surgical stabilization procedures for CCLR is tibial plateau leveling osteotomy (TPLO). The goal of this procedure is to neutralize cranial tibial thrust or subluxation during weight bearing by flattening/leveling the tibial plateau angle, which should eliminate pain during weight bearing and slow the progression of osteoarthritis in the stifle.1 Although TPLO does not prevent cranial drawer or internal tibial rotation, compared with alternative procedures it has been shown to provide one of the best returns to normal clinical function.2-4

The recovery period after TPLO correction of a CCLR can often be long and frustrating. The stages of recovery vary from patient to patient and depend on several patient factors such as age, weight, body condition score, overall health, and fitness level.2,3,5-8 Recovery may also be influenced by the CCLR severity, concurrent injuries, surgical technique, and postoperative management strategies.4, 9-14 TABLE 1 shows postoperative expectations for up to 2 years after TPLO surgery. 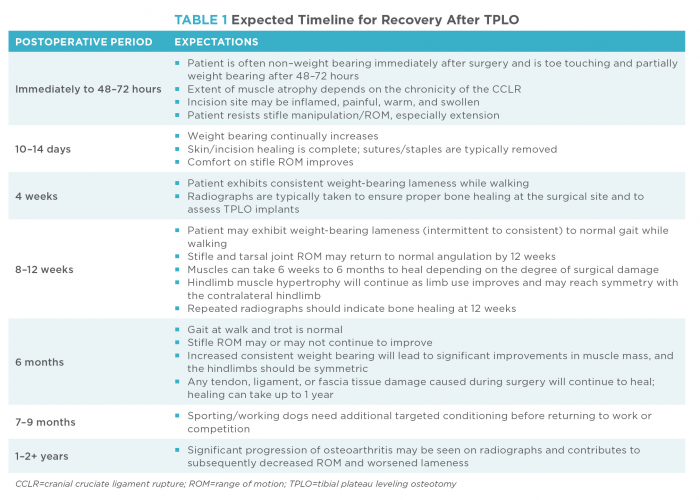 The general practitioner is often the main point of contact with the client and patient after surgery and during re-evaluations may see patients experiencing complications secondary to the TPLO procedure. Complications may affect 10% to 25% of patients.15 Depending on the identified complication, referral back to the orthopedic surgeon or to a rehabilitation specialist may be warranted. TABLE 2 demonstrates common TPLO complications, expected timelines, and interventional strategies. 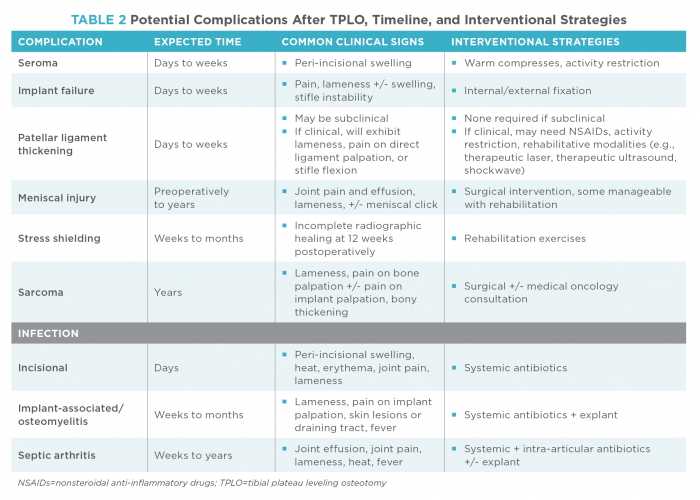 Incisional complications include seromas and incision infections; both may appear as peri-incisional swelling. Seromas are typically nonpainful, soft, and dependent; infections may additionally demonstrate serosanguinous or suppurative drainage, erythema, heat, and pain on palpation. Seromas are aseptic and should not be sampled or drained unless an infection is strongly suspected. Seroma treatment revolves around minimizing joint movement by strictly limiting activity, administering sedative medication, and applying warm compresses to reduce swelling. Incision infections should be cultured and treated with appropriate systemic antibiotics.15

Infection can also be associated with the implant or underlying bone, or it can be within the stifle joint.15 Implant-associated infections can result from development of a biofilm. The implant serves as a nidus for bacterial colonization, which if left untreated can extend to the underlying bone and result in subsequent osteomyelitis. Septic arthritis may occur as an extension of osteomyelitis, may have an iatrogenic etiology from prior arthrotomy or arthroscopy, or may occur spontaneously through hematogenous spread.16 These deep infections may be evident in the weeks after surgery or may appear years later. Clinical signs associated with these deeper sources of infection include return of progressive joint pain and lameness; pain on palpation of the implant; skin lesions or draining tracts; and signs of systemic infection such as increased rectal temperature, lethargy, and reduced appetite. Stifle radiographs and/or referral back to the orthopedic surgeon are typically indicated for these cases. Depending on the source of infection, systemic and/or local antibiotics may be warranted, and implant removal may be required after osteotomy healing if the implant is suspected to be serving as a nidus for biofilm.

Stifle instability may persist or return postoperatively due to implant failure or the pivot shift phenomenon. Implant failure may result from inadequate activity restriction before osteotomy healing. Fracture of the tibial tuberosity or fibula can also contribute to recurrent joint instability.17-19 Pivot shift is a rotational instability that may follow medial meniscectomy, muscle atrophy, and altered limb use; it may be corrected with a targeted therapeutic exercise program.20 Persistent instability as evident by the presence of a positive cranial tibial thrust reportedly follows up to 30% of TPLO procedures5 and predisposes the patient to more rapid and severe progression of osteoarthritis as well as increased risk for meniscal injury. Stifle radiographs and/or referral back to the orthopedic surgeon may be indicated when stifle instability associated with clinical lameness is persistent or recurrent.

For 80% to 100% of TPLO patients, thickening of the patellar ligament is commonly evident on examination and radiographs after the procedure (FIGURE 1), thought to be caused by the altered biomechanical loading of the ligament, resulting from lengthening of the distance between the patella and tibial tuberosity.15,21,22 For many patients in which this is identified, the thickening seems to be nonpainful and nonclinical, and it reportedly resolves within 4 to 8 weeks after surgery. A lesser percentage of patients may experience clinical desmopathy characterized by return of lameness and pain on palpation of the ligament and stifle flexion. Treatment considerations include nonsteroidal anti-inflammatory drugs (NSAIDs) and other analgesic medications; exercise restriction; and rehabilitative modalities such as therapeutic laser, ultrasonography, and extracorporeal shockwave therapy.23 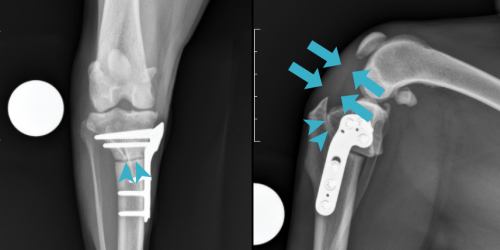 Meniscal injury may occur before TPLO or after,15,21 especially in the presence of persistent cranial tibial translation or pivot-shift instability. Patients will often demonstrate an acute, severe return of lameness with significant pain localized to the stifle, often worse on flexion than extension; marked joint effusion; and a meniscal click during joint motion. A suspected meniscal injury may be confirmed via advanced imaging such as ultrasonography, magnetic resonance imaging, or more commonly via surgical exploration using arthroscopy or arthrotomy. Surgery is typically necessary to remove the damaged portion of meniscus, although small tears may be managed conservatively with activity restriction, pain management, and rehabilitative therapies.24

Delayed or incomplete healing of the osteotomy site should be suspected if bone healing is insufficient radiographically at 3 months after surgery.21 Delayed or nonunion healing may result from an underlying systemic metabolic derangement in the patient or from stress shielding. Stress shielding occurs when the rigidity of osteotomy stabilization and lack of forces through the bone result in insufficient stimuli for callus formation and subsequent bone healing. Increasing the mechanical stimuli for appropriate osteotomy healing warrants an appropriate therapeutic exercise program designed under the guidance of a rehabilitation specialist. Further intervention using rehabilitative modalities (e.g., shockwave therapy) or surgical techniques (e.g., bone grafting) may also be indicated for some patients.25,26 Long-term NSAID use delays bone healing when administered beyond 2 weeks postoperatively and may contribute to delayed osteotomy healing; thus, NSAIDs should be discontinued as soon as reasonably possible.10

Sarcoma of the proximal tibia has recently been associated with prior TPLO. A recent study found that proximal tibial osteosarcoma is 40 times more likely in dogs with than without a history of TPLO.27 Proximal tibial osteosarcoma after TPLO may be associated with implants made through a casting process or subject to corrosion.27 Histiocytic sarcomas and synovial sarcomas have also been reported. Clinical signs include acute onset of lameness, pain on palpation of the implant and/or proximal tibia, and possible bony thickening or swelling in this region more than 1 year after surgery. Pathologic fracture of the proximal tibia may also occur. Radiographic examination is indicated for patients with these clinical signs.

In addition to the common complications that can occur after TPLO, the general practitioner should also evaluate postoperative patients for common rehabilitation and myofascial sequelae to CCLR and TPLO. Several studies have described benefits of postoperative rehabilitation after TPLO, although additional large, randomized controlled clinical trials are needed before formal rehabilitation for all postoperative patients can be conclusively recommended.4,9,11,13,28 To optimize patient outcome, especially for patients that do not meet expected milestones during recovery, referral to a rehabilitation specialist should be considered. TABLE 3 describes common rehabilitation and myofascial sequelae to CCLR and TPLO that may be detected during re-evaluations, along with expected timelines of occurrence and interventional strategies. 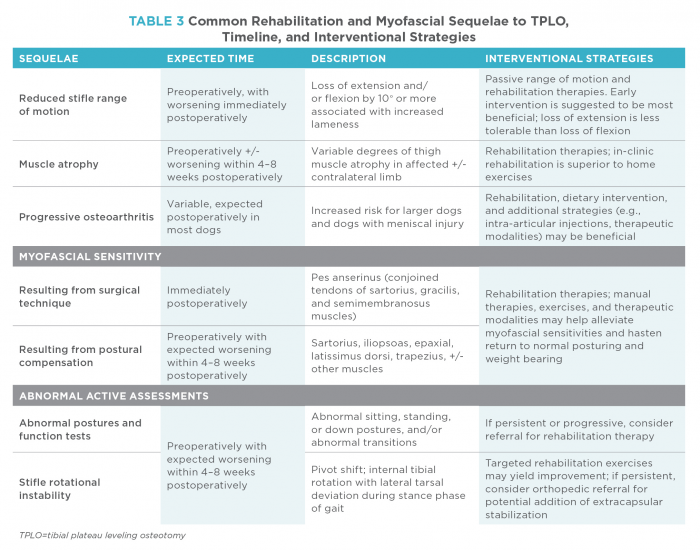 Several studies have reported post-TPLO loss of stifle range of motion (ROM) lasting between 5 weeks and 2 years or more, depending at least partially on postoperative management.11,28-30 One large, longitudinal study reported that clinical lameness scores were significantly higher for dogs with a loss of extension or flexion of 10° or more than for those with a loss of less than 10°.30 This study also reported that, compared with stifles with loss of flexion, stifles with a loss of extension of 10° or more had increased radiographic femorotibial osteoarthrosis scores and were less amenable to correction through rehabilitation. One small, prospective clinical trial demonstrated significantly greater stifle ROM at 3 and 6 weeks postoperatively in dogs that received early, intensive postoperative rehabilitation than in dogs that underwent home exercises. Among those in the rehabilitation group, no difference was found between affected and contralateral stifles by postoperative week 6.11 Monitoring for asymmetry of ROM between the affected and contralateral stifle joints after TPLO is recommended, as is referral to a rehabilitation specialist if detected, especially when a disparity of 10° or more exists between flexion or extension values.

As a measure of muscle atrophy in postoperative TPLO dogs, several studies have evaluated thigh circumference.9,11,28,30 Three of these studies demonstrated preoperative reductions in affected limb circumference, with either no change or no further circumference reductions during the first 8 postoperative weeks, which could be improved through in-clinic rehabilitation.11,28,30 Especially for patients with both persistent muscle atrophy and stifle rotational instability, referral to a rehabilitation specialist is recommended to optimize patient outcomes.5,20

The veterinary literature contains little data describing postoperative myofascial pain resulting from surgical technique and/or compensatory postural changes and weight shifting after CCLR and TPLO. Kirkby Shaw et al. recently described the typical elevation of the pes anserinus (the conjoined tendons of the sartorius, gracilis, and semimembranosus muscles) during TPLO and subsequent postoperative restrictions and sensitivities in these muscles.5 The same review also describes the potential for increased compensatory loading and subsequent myofascial sensitivity and trigger point development in overloaded muscles. In the authors’ experience, most commonly detected muscle sensitivities are in the affected limb’s sartorius and iliopsoas, bilateral thoracolumbar epaxial, latissimus dorsi, and trapezius muscles. A combination of manual therapies, exercises, and therapeutic modalities may help alleviate myofascial sensitivities and hasten return to normal posturing and weight bearing.

During evaluation of postoperative TPLO dogs, function (e.g., walking and changing postures) should be assessed. Abnormalities, such as walking with a pivot shift or sitting with reduced stifle and/or tarsal flexion or with external rotation of the hindlimb, indicate persistent compensation.5 Persistent compensatory postures may indicate continued pain or instability, reduced ROM, or altered proprioception and should prompt further evaluation and potential referral to a rehabilitation specialist or orthopedic surgeon.

TPLO is one of the most commonly recommended and most successful surgical procedures for CCLR. Recovery after TPLO can be long and oftentimes frustrating for clients but can also result in the best return to function, given that complications arise in only 10% to 25% of patients.15 An understanding of the potential complications and sequelae can help guide therapy postoperatively and enable improved counseling of clients on what to expect after surgery. Mild routine complications may be handled by the general practitioner; however, with regard to more severe complications, it is important to know when a patient should be referred back to the orthopedic surgeon or to a rehabilitation specialist.