Treating Angel Wing Deformity: A Sling for the Wing

Dr. Wade graduated from the Cornell University College of Veterinary Medicine in 1997 and completed a residency in avian and exotic medicine and surgery at the Animal Medical Center in New York City in 2003. That same year, she obtained board certification in avian practice through the American Board of Veterinary Practitioners. In 2012, Dr. Wade opened Specialized Care for Avian & Exotic Pets, the only practice in western New York state exclusively devoted to the care of birds, small mammals, reptiles/amphibians, and fish. She lives with her husband Eric, daughter Sydney, and pets, which include a dog, 3 Poicephalus parrots, a mouse, 4 Madagascar hissing cockroaches, and assorted fish. In her free time, she enjoys singing and playing the piano and has recently taken up the Native American flute.

Carpal valgus deformity in birds is an occasional pediatric musculoskeletal deformity that primarily affects growing birds. This deformity involves pronation of one or both carpi and dorsolateral projection of primary wing feathers. It is also known as angel wing; other synonyms include airplane, slipped, tilt, crooked, rotating, flipped, dropped, reversed, straw or healed-over, sword, or spear wing.

Although primarily found in large fledgling waterfowl (e.g., geese, swans), angel wing deformity has also been found in smaller Anseriformes (e.g., ducks) and birds of other orders. It is more commonly seen in captive birds but has been seen in wild bird species as well. Males are more frequently represented. Not all members of a clutch may be affected.1-3

Among ducks and geese, tropical and temperate species are particularly affected, and the condition is more common during warmer weather, when young birds use more of their dietary energy for growth than for maintenance of body temperature. Typical waterfowl diets of grass and vegetation have a protein content of 17% to 18%; feeding grower pellets or cereals with higher protein content results in faster growth. Ducks are most at risk for angel wing deformity when they are 8 to 12 weeks of age; white Roman geese are most at risk when 6 to 14 weeks of age.4

Angel wing deformity has been found to be the most common musculoskeletal abnormality affecting 4 species of captive-bred bustard chicks younger than 30 days of age. A retrospective review found that the condition developed in 18% of bustards reared at an avian research center, typically at 5 to 19 days of age, most commonly in the white-bellied bustard (Eupodotis senegalensis).5 Sporadically, this condition is seen in other free-ranging wildlife, including herons, pelicans, cormorants, and boobies.6 Among parrots, angel wing deformity in captive budgerigars, macaws, and conures has been infrequently reported.7

Causes of angel wing deformity are likely multifactorial and include increased intake of high-energy food, rapid growth, and genetics. Nutritional culprits are high levels of protein and carbohydrates and/or altered calcium:phosphorus ratio as well as deficiencies in vitamin D3, vitamin E, and manganese. Also suspected are incubation and hatching problems, excessive heat during the early growth period, and restricted exercise. Recently, increased stocking density and toxins (e.g., T-2 mycotoxin) have been shown to increase incidence and severity in white Roman geese.4,8

Feeding high-protein diets (32% protein) to greater sandhill cranes (Grus Canadensis tabida) has been shown to lead to a wing deformity rate of 25% during the period of rapid growth (7 to 28 days after hatching). Feeding a 24% protein diet with low (0.73%) levels of sulfur-containing amino acids slows crane growth sufficiently to reduce limb deformities.9,10

When the blood feathers (new feathers formed during growth or after molting) develop faster than the muscles, the metacarpus starts to rotate outward, creating a carpal valgus. The remiges (flight feathers) are often damaged and protrude at abnormal angles, sometimes as severe as 180°. The feathers may be stripped of their barbules, leaving only the shafts remaining. Flexion and extension of the wing joints may be normal or abnormal. There may be abnormal laxity of the joints and subluxation of the tendon of the propatagium over the carpus. A severity grade classification has been developed (TABLE 1). If not caught immediately and splinted, angel wing deformity may lead to permanent rotational deformity and inability to fly. For unknown reasons, if only one wing is affected, it is usually the left one.

After the feathers are fanning out, it is often too late to correct the deformity and birds will be unable to fly. After the bones have mineralized, the condition is permanent.

In addition to diet correction and management changes, treatment has traditionally consisted of splinting or surgical correction. If angel wing deformity is left uncorrected, management options are euthanasia or placement in captivity (trimming primary feathers [the longest feathers on the wing, farthest from the body when the wings are extended] if needed to avoid trauma to the wing).

Treatment options have traditionally consisted of early intervention to stabilize the carpus with coaptation, such as a figure-of-8 splint using Vetrap (3M, 3m.com) or similar flexible self-adhesive bandage. Bandages must be changed every 3 days to allow for wing growth. For mild cases, simply taping the wing on itself in a normal position for 3 to 5 days may be sufficient.

Although angel wing is unusual in raptors, a case report of a 4-week-old captive female Northern goshawk (Accipiter gentilis) with bilateral angel wing deformity describes resolution of the deformity 2 weeks after application of figure-of-8 bandages.11 Bandages were changed every 2 to 3 days and physical therapy was performed between bandage changes. The diet was changed from day-old chicks to a restricted amount of a variety of avian- and mammalian-derived food items. Although resolution required 1 more week than is typical, this case was successful due to properly placed and frequently changed bandages along with physical therapy.

Although traditionally used, figure-of-8 splints can cause the following problems:

After the bones have mineralized, surgical correction may be pursued with difficulty and involves an osteotomy of the proximal major metacarpus and placement of an intramedullary pin to allow for rotation. Bandaged in normal position (and changed regularly), healing usually occurs in 6 to 8 weeks. Return to full flight after surgery is expected for only about 50% of patients.

After many years of seeing several poor outcomes after application of the traditional figure-of-8 and other splints, in the summer of 2019, the author developed the concept for the angel wing sling. The previous poor outcomes had usually resulted from inexperienced wildlife rehabilitators placing the splints incorrectly or replacing them too infrequently. The angel wing sling uses the same principles as the Altman tibiotarsal fracture tape splint, except the bones and joints are not immobilized but instead are left to move freely inside 2 layers of flexible self-adhesive bandage, which when finished has the appearance of a pierogi. Since 2019, angel wing deformity has been successfully corrected with the new sling for approximately 20 juvenile ducks and geese in the author’s care.

The procedure below describes the materials appropriate for Canada goslings (FIGURE 1). For smaller species, such as mallard ducklings (FIGURE 2), smaller strips of bandage may be used. The application process is the same. 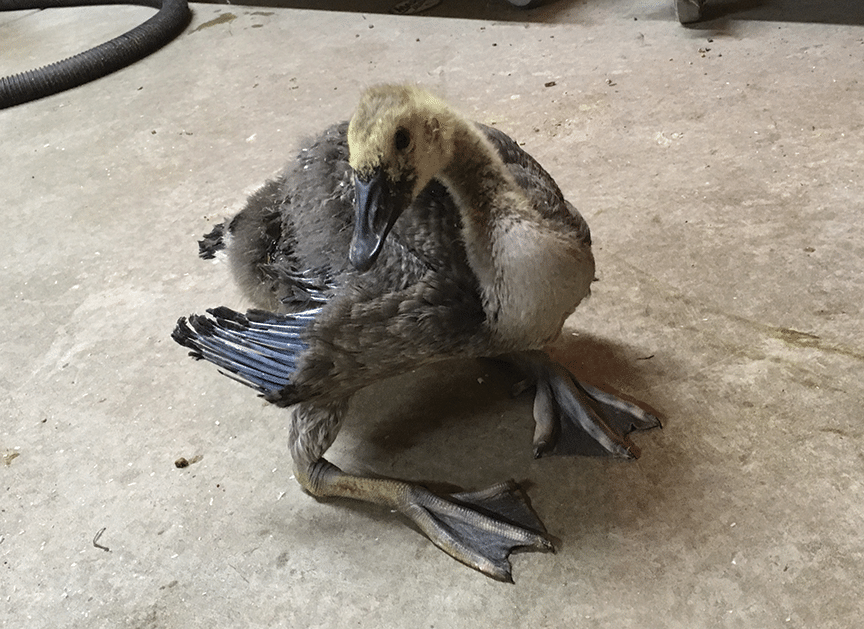 Figure 1. Canada gosling with angel wing deformity of the right wing. (A) Side view. 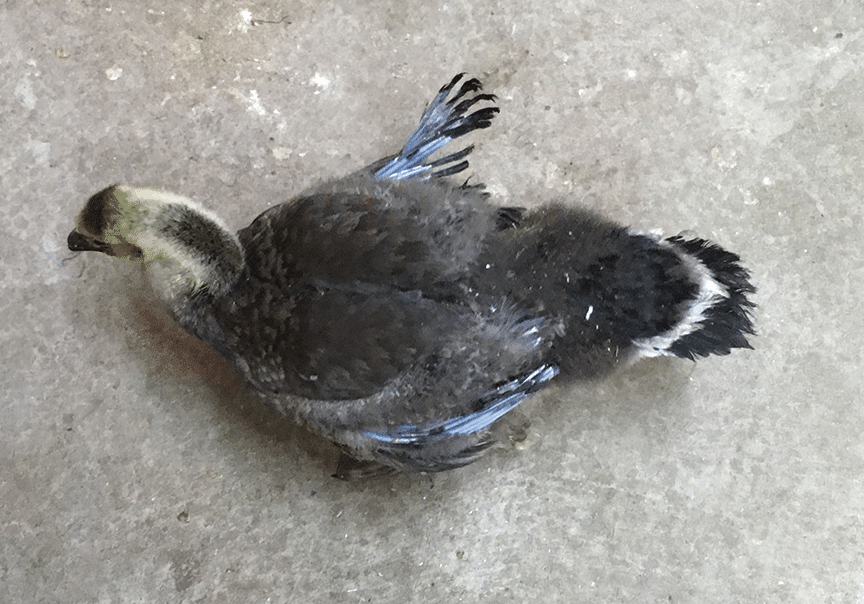 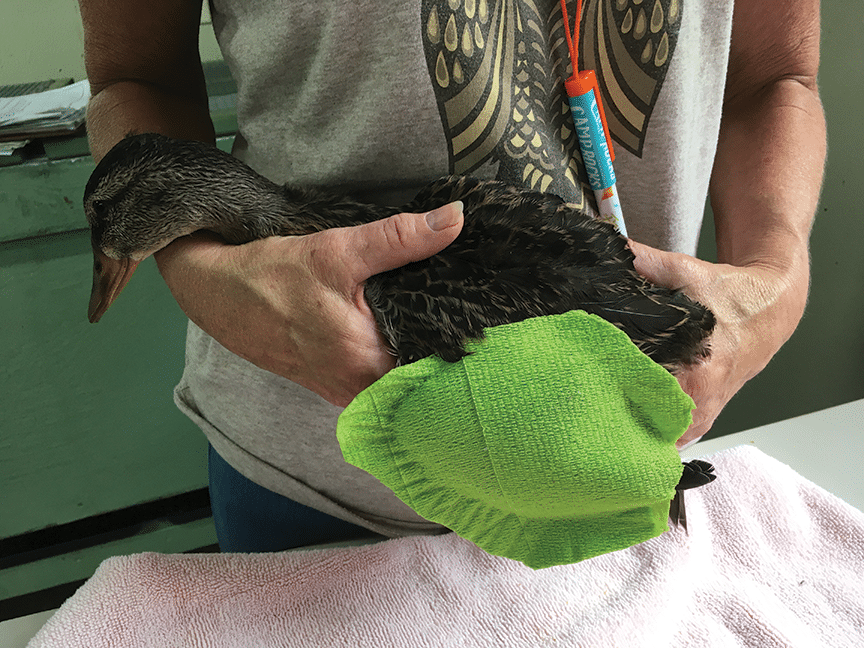 Compared with the traditional figure-of-8 bandage, the angel wing sling has the following benefits:

The new “pierogi wrap” sling is an alternative coaptation method for early correction of angel wing deformity in growing birds. Using affordable materials, it is easy to apply, reduces the stress of frequent handling, and avoids some of the potential complications of the traditional figure-of-8 bandage.