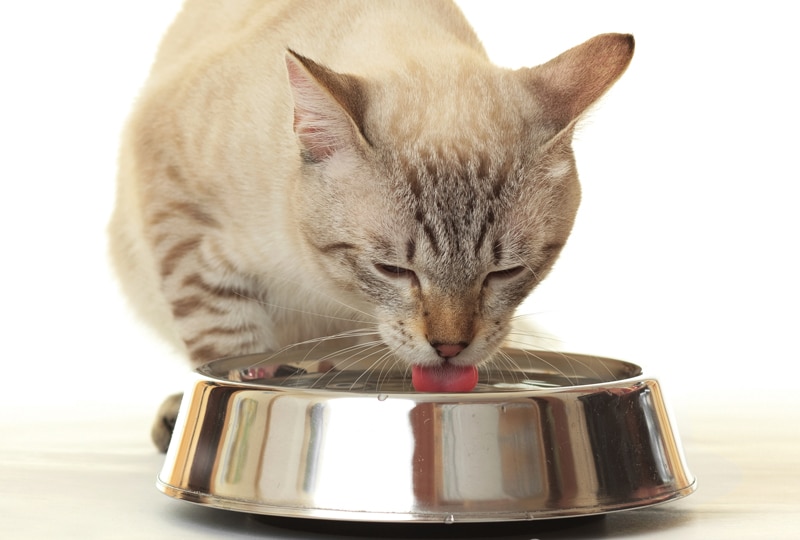 Feline diabetes mellitus, one of the most commonly encountered feline endocrine diseases, is comprehensively reviewed, with an emphasis on providing up-to-date information on diagnosis and treatment based on current literature and research. The article outlines the insulins available for therapeutic use in cats and the nuances of each; a table provides insulin doses. Pathogenesis, diagnostics, other management modalities, and monitoring are also addressed.

Diabetes mellitus (DM) is a commonly encountered feline endocrine disease.1 DM is defined as persistent hyperglycemia and glycosuria due to an absolute or relative insulin deficiency. The most common causes of feline DM are:

Insulin is secreted exclusively from beta cells in the pancreas’ Islets of Langerhans. Insulin deficiency occurs when beta cells are destroyed or their function impaired, and the pathogenesis of beta cell dysfunction is used to classify DM.

In humans, DM is classified as:

Most feline diabetics have type II DM,2 and may have underlying susceptibilities to this type due to genetic predisposition and decreased insulin sensitivity (seen with obesity).3,4

Type III DM is similar to impaired glucose tolerance in humans. Medications or diabetogenic hormones (epinephrine, cortisol, glucagon, and growth hormone) interfere with the action of insulin, result in glucose intolerance, and ultimately lead to DM. This is in distinction to Type II DM in which the cause of insulin resistance is often unknown.

Amylin, also known as islet amyloid polypeptide (IAPP), is synthesized in the Islets of Langerhans and co-secreted with insulin. In cats with insulin resistance, amylin and insulin secretion increase concurrently. Over time, amylin overproduction progresses to diabetes due to 2 phenomena:

Both contribute to initial glucose intolerance and, eventually, overt hyperglycemia and glucosuria.

DM is diagnosed based on clinical signs and laboratory testing.

Baseline laboratory evaluation should include a serum biochemistry profile, CBC, urinalysis, and urine culture. Diabetic patients frequently have urinary tract infections even in the absence of active urine sediment (Table 1).7

Transient hyperglycemia may be caused by stress, diabetogenic hormones, and post prandially in animals with glucose intolerance. Cats are particularly sensitive to stress hyperglycemia due to catecholamine release.8

Fructosamine is formed when glucose reacts with amino acids of serum proteins, such as albumin. In hyperglycemic states, levels of fructosamine increase. Fructosamine levels can be used for several purposes:

Total thyroxine levels should be evaluated to rule out hyperthyroidism as a cause for insulin resistance.

Several types of insulin are available for use in diabetic cats. 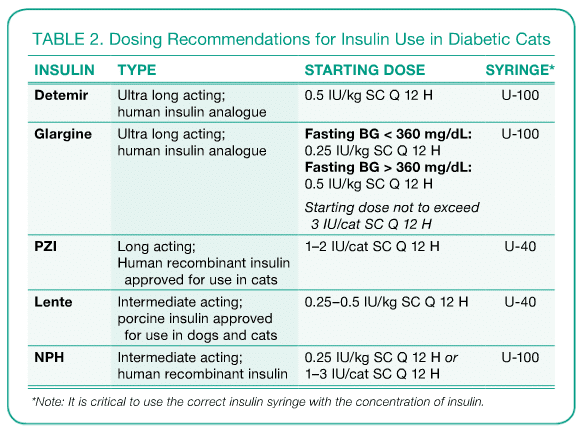 Glargine is a long-acting insulin analogue that is designed to provide basal insulin concentrations in humans. It remains soluble in acidic solutions but forms precipitates in the neutral environment of subcutaneous tissue. The change in pH associated with precipitation contraindicates diluting or mixing glargine for administration.

Efficacy. Glargine has been shown to be effective in felines with DM. A recent study compared the glycemic control and remission probabilities in 24 newly diagnosed diabetic cats treated twice daily with either glargine, PZI, or lente insulin and fed a low-carbohydrate diet.9

Diabetic remission is defined as the ability to maintain euglycemia without insulin for 2 to 4 weeks after insulin therapy has been discontinued, without the reappearance of clinical signs of diabetes. Remission appears more likely to occur if:

At least 25% to 30% of cats that have achieved remission subsequently relapse into overt diabetes and need reinstitution of insulin treatment. In these cats, a second remission is unlikely to be achieved and permanent insulin therapy is usually needed.

Good glycemic control soon after diagnosis is associated with increased probability of remission and should be the goal of insulin therapy.10,11

Monitoring. Because glargine is a basal insulin, 4-hour post injection BG monitoring can be performed. If performing a 12-hour BG curve (BGC), samples can be drawn every 4 hours. This type of monitoring is inappropriate for nonbasal insulins, such as NPH or recombinant PZI.

Additional Notes. The manufacturer recommends discarding opened vials after 4 weeks of use; however, if refrigerated, opened vials can be used for 6 months (unless discoloration is noted).

Detemir, like glargine, is a basal human insulin analogue and binds reversibly to albumin, resulting in a long duration of action. It has been demonstrated to be effective in the treatment of feline DM and is also associated with remission in cats that receive at-home, intensive BG monitoring.

Efficacy. Another recent study of owner results collected through an online forum evaluated detemir and a protocol of intensive BG control with home monitoring in diabetic cats, and compared the results with a previous study that used the same protocol with glargine.12

Monitoring. Although detemir is a basal insulin, studies have not been performed to evaluate spot BG monitoring. Therefore, BGCs should be performed and BG monitored every 2 hours when using this type of insulin.

Human recombinant PZI has been demonstrated to be effective and is approved for use in cats (ProZinc, boehringer-ingelheim.com).13,14 Zinc is added to the protamine to prolong duration of action.

Efficacy. In a large clinical trial, 133 cats were treated with PZI twice daily for 45 days.13

Administration. PZI is effective for controlling glycemia in diabetic cats and can be used as an initial or alternative treatment in diabetic cats that do not respond to treatment with other insulin preparations. Starting dose is 1 to 2 IU/cat Q 12 H.14

Lente, which is of porcine origin and contains zinc, is approved for dogs and cats, and has recently been reintroduced to the market (Vetsulin, Merck.com).

Administration. The protocol used in this study is suitable for and easy to use in practice.

Additional Notes. An important change that occurred with the relaunch of Vetsulin is the manufacturer recommends that Vetsulin be shaken thoroughly until a homogeneous, uniformly milky suspension is obtained. Foam formed during shaking should be allowed to disperse before use and, if required, the product should be gently mixed to maintain a homogeneous, uniformly milky suspension before use. Clumps or white particles can form in insulin suspensions: do not use the product if these persist after thorough shaking. Other types of insulins should be mixed gently, not shaken.

The product has a shelf life of 12 months and is usable for 42 days once the vial has been opened.

Note that Vetsulin has amorphous insulin in it, which brings on an earlier peak action time. Therefore, glucose curves should be carefully monitored, especially in the first 2 to 6 hours after administration.

NPH is an intermediate-acting human insulin that contains zinc and has been used more frequently in dogs than cats. There is little data to support its use in cats, and it is not approved for use in cats.

Severe insulin resistance and marked hyperglycemia, despite high dose insulin, can be caused by:

Effectiveness of treatment with this class of drugs depends on functional beta cells. Therefore, in cats suffering from beta cell exhaustion or glucose toxicity, response can be variable.

Side effects can include vomiting, hepatotoxicity, and hypoglycemia. In addition, insulin secretion stimulated by sulfonylurea drugs has been accompanied by concurrent amylin secretion,16 which may result in further damage to beta cells.

Due to variable response rates and side effects its use is not typically recommended.

Glyburide is a second-generation sulfonylurea drug with a longer duration of action than glipizide. It has been evaluated in normal cats and resulted in the release of insulin. Both sulfonylureas may result in progression of diabetes due to increased production of IAPP and its subsequent conversion to amyloid in the pancreatic islets.16

Chromium picolinate is a trace element and cofactor for the function of insulin. It increases both insulin binding and number of insulin receptors. Chromium deficiency can lead to insulin resistance; in humans, supplementation has been shown to improve glycemic control.18

Vanadium is another trace element that has glucose-lowering effects and may improve insulin secretion and glucose metabolism.

Studies in cats have shown little efficacy of chromium or vanadium in controlling clinical signs of DM.17

Exenatide (Byetta, amylin.com), a glucagon-like peptide-1 mimetic, is an injectable medication that plays a role in treatment of DM by stimulating insulin release. Other potential benefits include:

Exenatide was studied in healthy cats and shown to affect insulin secretion in a glucose dependent manner.18

In-clinic BGCs are more likely to be affected by stress hyperglycemia than BGCs generated at home. Veterinarians should be cautious of responding to high glucose results by overzealously increasing insulin doses. Monitoring strategies may be influenced by persistence or resolution of clinical signs.

A pressing concern for the newly diagnosed and treated cat is the possibility of development of hypoglycemia in individuals that may quickly go into remission. This can be addressed by using an at-home glucometer that is accurately calibrated for cats at the low end of the reference range.20

AlphaTRAK (abbottanimalhealth.com) is a species-specific glucometer calibrated for feline and canine patients. Use of human glucometers can lead to inaccurate readings and falsely low blood glucose values when used in dogs and cats.

David Bruyette, DVM, Diplomate ACVIM, is the medical director at West Los Angeles Animal Hospital and a clinical professor in the Department of Radiation Oncology at University of California—Los Angeles. Prior to his current positions, he was an assistant professor and head of internal medicine at Kansas State University and director of its Analytical Chemistry Laboratory. Dr. Bruyette received his DVM from University of Missouri and completed an internship at Purdue University and residency in internal medicine at University of California—Davis. He then became a staff internist at West Los Angeles Veterinary Medical Group and member of the Department of Comparative Medicine at Stanford University.