Uroliths are concretions composed primarily of highly organized crystalloids and a small amount of organic matrix. They are identified based on their mineral composition: calcium oxalate and struvite (magnesium ammonium phosphate) are the 2 most common feline uroliths.

Feline urine is a complex solution in which salts, such as calcium oxalate and magnesium ammonium phosphate, can remain in solution under conditions of supersaturation. This urine does, however, have a potential energy for precipitation, or the tendency to form crystals from dissolved salts. When crystals aggregate and grow into calculi before being voided, uroliths form.

In cats, approximately 45% of uroliths consist entirely or predominantly of struvite, and most feline struvite uroliths form in sterile urine (Figure 1).1 The pathophysiology of struvite urolith formation in sterile urine is poorly understood; however, dietary and metabolic factors that result in alkaline urine and increased concentrations of magnesium, ammonium, and phosphate in urine have been implicated.

Dietary Factors. Diets high in magnesium, phosphorus, calcium, sodium, chloride, and fiber, with moderate protein content have been associated with increased risk.2 A greater ability to concentrate urine (compared with dogs, in which struvite uroliths are commonly associated with infection) and, therefore, greater urine supersaturation, may be partially responsible for urolith formation in cats without urinary tract infections (UTIs).

Metabolic Factors. In addition, formation of sterile struvite uroliths may be twice as likely if urine pH is consistently elevated (6.5–6.9 versus 6–6.2).2 Alkaline urine pH is commonly affected by diet but may also be associated with drug therapy and renal tubular disorders. In 1981, more than 80% of the feline uroliths analyzed at the Minnesota Urolith Center were struvite.3 A major factor contributing to the decline in feline struvite uroliths over the last 35 years is the widespread use of magnesium-restricted, acidifying diets.

Factors involved in the pathogenesis of calcium oxalate urolithiasis (Figure 2) in cats are not completely understood but involve urine supersaturation with calcium and oxalate:

In 1981, less than 10% of the feline uroliths analyzed at the Minnesota Urolith Center were calcium oxalate; in 2013, that percentage had increased to 41%.3 Use of acidifying diets is thought to have played a role in this increase: diets that produce a urine pH between 6 and 6.2 are 3 times more likely to produce calcium oxalate uroliths when compared with acidifying diets designed to produce a urine pH between 6.5 and 6.9.2

In addition, metabolic acidosis increases calcium mobilization from bone and contributes to hypercalciuria as well as decreased urinary citrate excretion.

Clinical signs of urolithiasis in cats depend on urolith number, location, and physical characteristics. Solitary, smooth uroliths in the bladder or renal pelvis may be less irritating than multiple uroliths or uroliths with irregular or sharp borders. Urolithiasis complicated by bacterial UTI is more likely to cause tissue inflammation than sterile urolithiasis.

Nephroliths are often asymptomatic but can be associated with microscopic or gross hematuria. All nephroliths have potential to damage renal tissue and cause chronic inflammation; this chronic inflammation may decrease normal host defense mechanisms and increase the risk for ascending bacterial pyelonephritis in cats with lower UTIs.

Ureteroliths may be asymptomatic or associated with varying degrees of abdominal pain and decreased appetite. In cats with pre-existing CKD, partial or complete ureteral obstruction will often result in an “acute-on-chronic” decompensation of renal function that may include hyperkalemia and/or acidemia. Ureteral obstruction in a cat with previously normal renal function may not be associated with any clinicopathologic abnormalities, especially if it is unilateral, but renal asymmetry may be palpated due to hydronephrosis.

Cystoliths may be asymptomatic or, instead, irritate the uroepithelium, resulting in hematuria, pollakiuria, and dysuria/stranguria. Struvite cystoliths can result from urease-producing bacterial UTI; however, any urocystolith can irritate the uroepithelium, compromise host defense mechanisms, and predispose the patient to a complicated bacterial UTI.

Nephrolith: Calculus formed or retained in the kidney

Ureterolith: Calculus located in the ureter

The number, mineral composition, size, and location in the urinary tract affect the radiographic and ultrasonographic appearance of uroliths.

Indications for imaging besides radiography include: 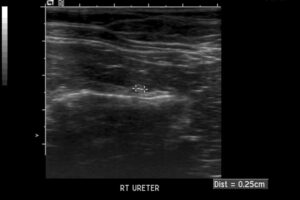 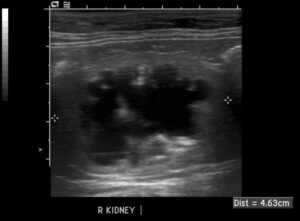 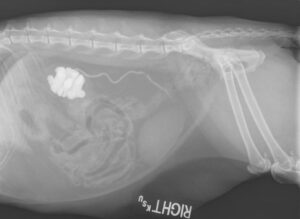 Transurethral cystoscopy may be performed in both male (flexible scope) and female (rigid scope) cats for the diagnosis of cystoliths; however, general anesthesia is required. In female cats, holmium:YAG laser lithotripsy associated with cystoscopy may be used to noninvasively “break up” cystoliths and remove them from the bladder without surgery. Cystoscopy may also be used to obtain biopsy tissue from the lower urinary tract.

Urine pH, crystalluria, and presence of urease-producing bacteria may aid in the presumptive identification of urolith type. Serum ionized calcium concentrations should be assessed in cases of suspected calcium oxalate uroliths to rule out hypercalcemia.

Uroliths may be caused by a UTI (struvite) or may compromise normal host defense mechanisms and predispose cats (especially female cats) to UTI. Therefore, a urine culture should be routinely performed.

Definitive diagnosis requires quantitative mineral analysis of uroliths that have been voided or recovered from the urinary tract.

General principles for treatment of urethral calculi include relief of urethral obstruction and bladder decompression, if necessary, which can usually be accomplished by:

Fluid therapy should be initiated to restore water and electrolyte balance, if postrenal azotemia exists.

Cats with obstructive ureterolithiasis are best managed with ureteral stents or subcutaneous ureteral bypass (SUB). Intracorporeal laser lithotripsy via cystoscopy may be used to treat cystoliths in female cats.

These findings indicate the need for emergency treatment to decrease the serum potassium concentration prior to sedation/anesthesia for urethral catheterization.

Medical dissolution of feline struvite uroliths is effective; however, the decision to proceed surgically as opposed to medically involves several considerations (Table 1).

Diet. Struvite dissolution diets (Table 2) are magnesium-reduced, acidifying diets. Due to their high sodium content and acidifying nature, these diets should not be fed to immature cats; reproducing queens; or cats with CKD, hypertension, congestive heart failure, postrenal azotemia/uremia, or hypokalemia. Additional supplementation of sodium chloride and/or urinary acidifiers is not recommended with use of dissolution diets. 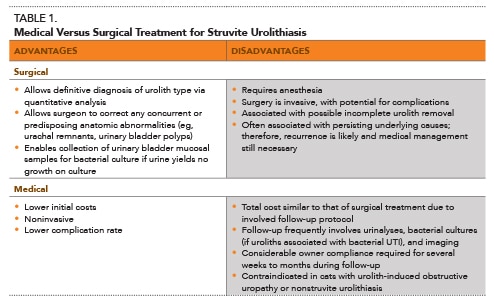 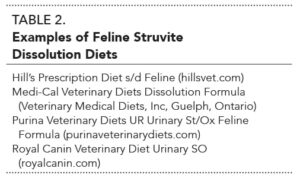 It is ideal to transition from the normal diet to the dissolution diet over a period of at least 1 week. Reradiograph cats on dissolution diets every 2 to 4 weeks, and feed the diet for a minimum of 30 days after the uroliths are no longer visible radiographically. The rate at which uroliths dissolve is proportional to the surface area of the urolith exposed to the undersaturated urine. Small, sterile struvite uroliths may dissolve in as little as 1 to 2 weeks.14

Antibiotics. In addition to decreasing the concentration of crystalloids in urine, elimination of any bacterial UTI is essential in medical treatment of struvite urolithiasis. If infection is present at start of treatment, continue antibiotics throughout the course of medical dissolution because viable bacteria may be released from uroliths as they dissolve. Select antibiotics based on urine culture and sensitivity findings. Infection-induced struvite uroliths usually dissolve in 2 to 3 months.15

Medical dissolution diets for oxalate urolithiasis are not yet available. Small urocystoliths may be removed by catheter retrieval or voiding hydropropulsion in female cats; however, surgery is the usual means for removal of large calcium oxalate cystouroliths.

Acute decompensation of a patient with CKD and known or suspected nephroliths should prompt swift evaluation to rule out an obstructive uropathy. 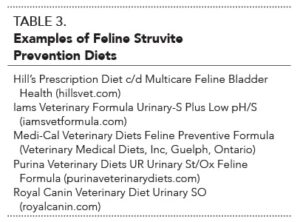 Several commercially available diets have been specifically formulated to prevent recurrence of calcium oxalate uroliths in cats (Table 4). Canned diets are usually recommended over dry diets because of their high water content. 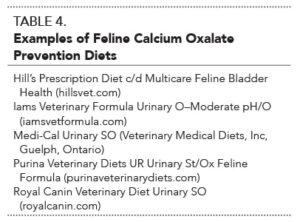 Dietary Restrictions. Moderate restriction of calcium, oxalate, sodium, and potassium intake in association with normal intake of phosphorus and mild increases in magnesium is recommended to prevent recurrence of calcium oxalate uroliths after surgical removal.17 Increased dietary sodium intake may result in an increase in urinary excretion of calcium and, therefore, should be avoided. Feeding human foods with high calcium or oxalate content (eg, chocolate, peanuts, beets, sweet potatoes, spinach, rhubarb) should also be avoided.

Urine alkalization is indicated if urine pH is consistently lower than 6.5. Titrate potassium citrate to produce an ideal target urine pH of 7 to 7.5. The recommended starting dose of potassium citrate is 50 to 75 mg/kg PO Q 12 H.

When Urine Trouble: A Clinical Approach to Proteinuria