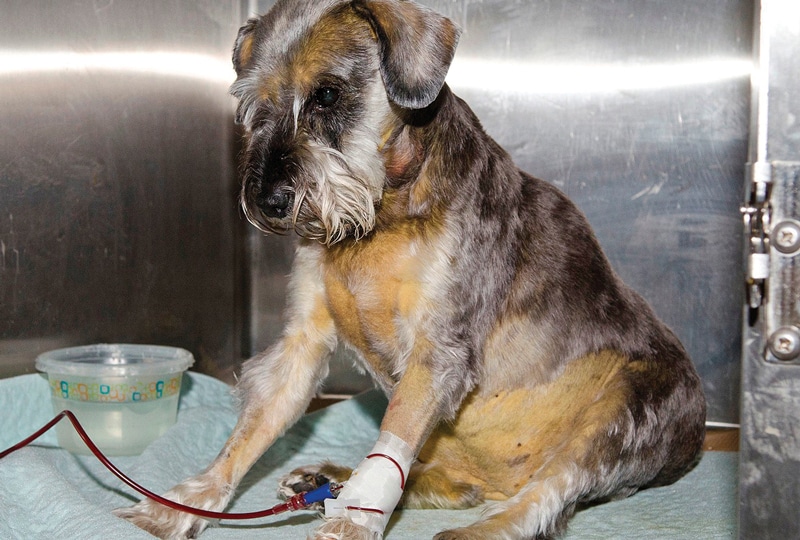 This article is the second in a 2-part series discussing the diagnosis and management of immune-mediated hemolytic anemia in dogs and cats. The authors provide an overview of diagnostics and describe the therapeutic approaches for treating the disorder.

Immune-mediated hemolytic anemia (IMHA) is one of the most common immune-mediated hematologic disorders in dogs and cats.1
In dogs, IMHA is commonly primary or idiopathic in origin, but also occurs secondary to triggers, such as infectious, inflammatory, and neoplastic diseases; drugs; and vaccines. In cats, the condition is usually secondary to an underlying cause.2

There is no single test that is definitively diagnostic for IMHA. Instead, evidence from various analyses is used to determine the diagnosis (Table 1). 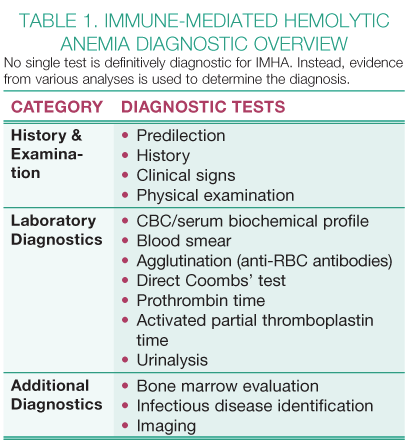 Initial diagnostics in an anemic patient should focus on identifying the cause of anemia. A diagnosis of anemia secondary to an underlying immune-mediated pathogenesis is based on evidence of accelerated red blood cell (RBC) destruction.

A diagnosis of primary IMHA is supported by the following signs and diagnostic results:

An exhaustive search for underlying causes of IMHA is critical, because if there is a trigger factor, treatment success is dependent upon its removal. A comprehensive review of the diagnostic approach for IMHA trigger factors is described in Part 1 of this article. 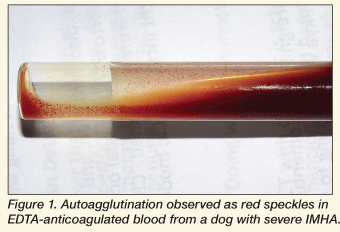 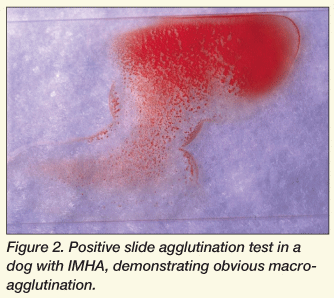 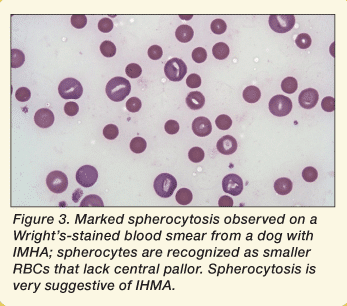 Other than glucocorticoid administration, the following described therapies are not indicated for all patients and should be used on a case-by-case basis. Table 2 provides the dosages of recommended medications. 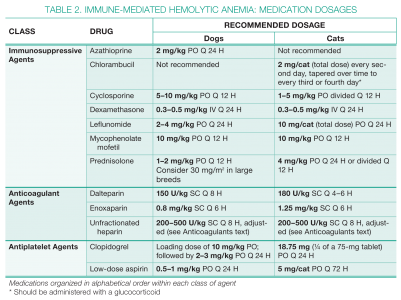 Glucocorticoids have multiple effects on the immune system, but the most important effect for IMHA patients is inhibition of macrophages within the mononuclear phagocytic system. Response to glucocorticoids often takes between 3 and 7 days.

Dogs. Immunosuppressive dosages of prednisolone or prednisone range from 1 to 2 mg/kg PO Q 12 H, with higher dosages not necessarily associated with improved remission rates. In large breed dogs, a dosage of 30 mg/m2 is often used to minimize side effects.

Cats. Many clinicians advocate administering prednisolone at 4 mg/kg PO Q 24 H, a higher immunosuppressive dosage than that used in dogs.

Dexamethasone may be used instead of prednisolone/prednisone, at a decreased dosage due to its greater potency. A dosage of 0.3 to 0.5 mg/kg IV Q 24 H is often administered in both cats and dogs.

Criteria that should prompt consideration of additional immunosuppressive agents include:

The addition of a second immunosuppressive agent is not benign—many drugs are expensive, can cause significant adverse effects, and may necessitate pharmacokinetic monitoring.

Dogs. Many clinicians initially administer a second immunosuppressive agent to reduce the side effects of steroids and allow more rapid glucocorticoid dose reduction. The most commonly used second-line immunosuppressive agents are azathioprine and cyclosporine, with other drugs such as mycophenolate mofetil and leflunomide being used more often in clinical practice.3

Cats. Because cats usually tolerate glucocorticoids well, for initial immunosupression, they receive steroids alone.4 However, cyclosporine and chlorambucil can be used as second-line immunosuppressive agents when needed.

Azathioprine is a relatively inexpensive purine antagonist that is often effective in IMHA patients; immunosuppression occurs mainly via T-cell suppression.5 The initial dosage in dogs is 2 mg/kg PO Q 24 H.5,6 This drug is not recommended for cats because they are very prone to its myelosuppressive effects.1,5

Significant side effects in dogs are uncommon to rare, and include gastrointestinal (GI) signs (anorexia, vomiting, diarrhea), myelosuppression, hepatotoxicity, and pancreatitis.1,5 Slight anemia is commonly observed in dogs on azathioprine, but it is invariably too mild to be of clinical concern.

While the exact timing of the immunosuppressive effects of cyclosporine is unknown, pharmacodynamic work in normal dogs in our laboratory has shown suppressive effects on T cells at 3 days post dosing and maximal suppression after 7 days of dosing at 10 mg/kg PO Q 12 H.

Ketoconazole can be concurrently administered to reduce cyclosporine metabolism and decrease the oral dosage needed to attain immunosuppression.

Mycophenolate mofetil, the prodrug of mycophenolic acid, induces immunosuppression by inhibiting inosine monophosphate dehydrogenase, targeting both B and T cells.

Its use is emerging in the literature for treatment of inflammatory and immune-mediated diseases in small animals. In a recent study evaluating prednisone combined with mycophenolate for treatment of IMHA, 77% of dogs survived to discharge, a rate that was comparable with other standard treatment regimes.9

While there are no veterinary approved products, mycophenolate is available as an oral human product in tablets, capsules, or an oral suspension. Starting dosage recommendations are:5

The most common side effects associated with mycophenolate mofetil, based on limited veterinary studies, include GI signs (inappetence, vomiting, diarrhea), lethargy, lymphopenia, and susceptibility to secondary infections. In humans, severe neutropenia has been reported as a rare side effect.

Leflunomide induces immunosuppression through the inhibition of dihydroorotate dehydrogenase, an enzyme needed for pyrimidine synthesis. This ultimately targets and suppresses both B and T cells.

While there are no veterinary approved products, leflunomide is available in a human tablet formulation. Starting dosage recommendations are:5

The most common side effects associated with leflunomide, based on limited veterinary studies, include GI signs (inappetence, vomiting, diarrhea) and lethargy. In dogs, bone marrow suppression (leukopenia and thrombocytopenia) has been reported. Serious but rare side effects reported in human medicine include severe bone marrow suppression, dermatologic reactions (ie, toxic epidermal necrolysis), and hepatotoxicity.

Chlorambucil is a cell-cycle nonspecific alkylating agent that is used to treat certain cancers as well as induce immunosuppression in conditions, such as inflammatory skin diseases, inflammatory bowel disease, and immune-mediated blood disorders, particularly in cats.

Chlorambucil is available as a coated 2-mg tablet that cannot feasibly be divided, and, therefore, dosing recommendations in smaller patients are often provided in multiples of 2, and/or “pulsed” at infrequent dosing intervals in order to avoid overdose. For immunosuppressive therapy, chlorambucil is almost always given in combination with an oral glucocorticoid. The starting dosage recommendation in cats is 2 mg (total dose) per cat every second day (with a glucocorticoid), tapered over time to every third or fourth day.5

Chlorambucil is relatively well tolerated, but does occasionally cause GI side effects, such as vomiting and diarrhea. Neurologic signs (including myoclonus, twitches, and seizures) have been reported in cats. The most common major adverse effect is myelosuppression, and complete blood counts must be monitored regularly (weekly at first) to watch for its development.

Once a positive response to therapy is achieved (stable or rising hematocrit for at least 1–2 weeks), slowly taper drug dosages by approximately 25% to 50%, one drug at a time, every 2 to 4 weeks.

Since any patient receiving potent immunosuppressive therapy is at risk for developing secondary infection, animals should be closely observed for signs of sepsis or infection, and tapering of drug doses should ideally begin shortly after disease remission is observed.

Antithrombotic medications, such as anticoagulants (ie, heparin) and antiplatelet medications (ie, aspirin, clopidogrel), are often administered in IMHA patients to reduce the incidence of PTE.3,11

IMHA patients are thought to have a hypercoagulable state and, therefore, are more prone to development of PTE. The pathogenesis of thromboembolism is thought to be multifactorial, including hypercoagulability (secondary to platelet activation as well as steroid administration), endothelial injury, and vascular stasis.

Because glucocorticoids are possibly associated with GI gastrointestinal ulceration, some clinicians administer gastric protectants when treating IMHA patients; these protectants include sucralfate, omeprazole and famotidine.

Human IV immunoglobulin is a sterile preparation of IgG derived from human plasma; it is thought to reduce Fc-mediated phagocytosis of IgG-coated RBCs by macrophages. IV immunoglobulin has been effective in a small number of dogs that were refractory to standard therapy.16

Fluid therapy is typically only warranted if the patient is dehydrated or has intravascular hemolysis and hemoglobinuria (since free hemoglobin is nephrotoxic). IV catheters should be removed as soon as fluids are no longer needed, as catheters are a possible risk factor for PTE. The same is true for central IV catheters, which should not be used in these patients.

Oxygen carrying support in the form of blood products—whole blood or, preferably, packed RBCs—is indicated when anemia is severe or associated with clinical evidence of tissue hypoxia, such as tachypnea, dyspnea, tachycardia, mental dullness, and weakness (Figure 4).

Many dogs with IMHA will require transfusion support, with some requiring multiple transfusions, especially during the first week of therapy.11,17 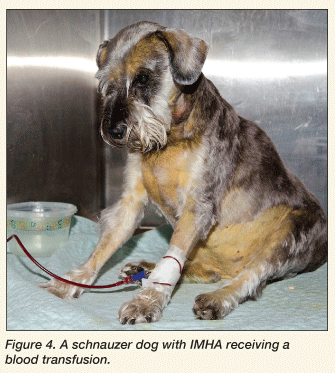 Splenectomy may be beneficial in patients who fail to respond to traditional therapy or those in which remission is only achieved with high doses of immunosuppressive agents, since the spleen is often a major organ responsible for RBC phagocytosis.

In 1 study, 10 dogs with IMHA had a splenectomy performed in addition to standard medical management. Nine dogs survived to 30 days without relapse, which suggests that splenectomy may be associated with an improved outcome in IMHA patients.18

Plasmapheresis rapidly removes autoantibodies from plasma and may be effective in acute, severe cases of IMHA, but availability is very limited.

Mortality rates in dogs with IMHA range from 26% to 70%, with PTE being a significant cause of death.3,17,19 Abnormalities linked to an increased mortality rate include autoagglutination, thrombocytopenia, leukocytosis, elevated alkaline phosphatase, hyperbilirubinemia, and hypoalbuminemia.3,11,17,20

IMHA appears to have a more favorable prognosis in cats, with 1 study documenting a mortality rate of 23%.4

Andrew Mackin, BVMS, DVSc, Diplomate ACVIM, is professor and Ward Chair of Medicine at Mississippi State University College of Veterinary Medicine. He received his degree from Murdoch University in Western Australia; then completed an internship and residency in small animal medicine at University of Melbourne and an internal medicine residency at Ontario Veterinary College.