David J. Reese, DVM, Diplomate ACVR, is clinical assistant professor in diagnostic imaging at the University of Florida College of Veterinary Medicine. His research interests include cross-sectional imaging of small and large animals as well as diagnostic imaging of exotic animal species, especially aquatic reptiles and mammals. Dr. Reese received his DVM from University of Florida and completed a radiology residency at Ohio State University.

This is the third article in our Imaging Essentials series—a series focused on providing critical information on radiography of the dog and cat. Read the first two articles, Small Animal Thoracic Radiography (September/October 2011) and Small Animal Abdominal Radiography (November/December 2011), at todaysveterinarypractice.com.

The purpose of this article is to review the three basic components of creating high-quality pelvic radiographs of the dog and cat, including positioning, technique, and quality control of the final images.

Pelvic radiographs are used in:

For any dog measuring 15 cm or greater (measured at the iliac crest), a grid (8:1, 110 lines per inch) should be used. Grids are available from most radiology manufacturers and a grid tray comes with all radiology units. The techniques for the ventrodorsal and lateral radiographic projections of the pelvis are the same. For dogs measuring less than 15 cm or cats, a tabletop technique is preferred (no grid).

If using direct or indirect digital radiography, then the imaging receptor remains fixed in the grid cabinet or within the table. If using a computed radiography system, the casette and imaging plate can be used in a tabletop fashion, similar to film screen combinations.

A routine radiographic examination of the pelvis consists of two orthogonal radiographs, including a lateral image and an extended leg ventrodorsal image. The stifle joints (through the level of the proximal crus) are included in both images.

The pelvic limbs should be taped separately with a sponge placed between them to ensure that the right and left hemipelves are aligned and directly superimposed.
The pelvic limb that is closest to the x-ray table is taped in a cranial position, whereas the limb away from the table is placed in a caudal position so the pelvic limbs are in a scissor position, with the stifle joints separate and not overlapping (Figure 1). 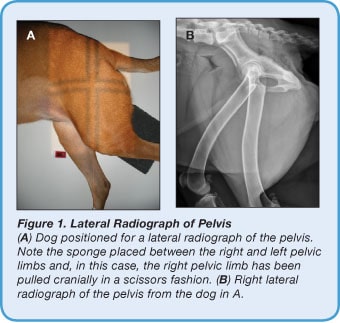 Positioning
The patient should be placed in dorsal recumbency in a positioning V-trough (Figure 2). Using a V-trough helps keep the patient’s vertebral column and sternum aligned and the pelvis in a straight position. To avoid superimposed artifacts from the V-trough, the entire pelvis should be positioned past the edge of the trough and placed on the x-ray table. This positioning also helps decrease geometric magnification of the image. 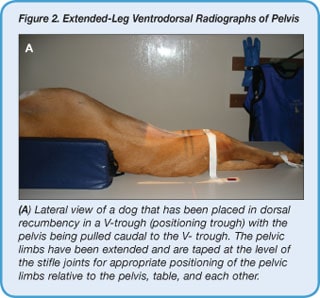 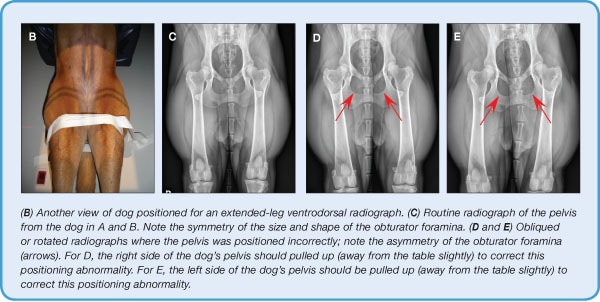 Collimation
Use the same procedures for setting the collimator light as described earlier for lateral images.

Dogs and cats with severe coxofemoral degenerative joint disease or fractures of the pelvis, femoral head/neck, or femur are not physically able to extend their femurs in the standard extended-leg ventrodorsal position. In this case, a frog-leg ventrodorsal image can be used for initial assessment.
It addition, in dogs or cats with capital physeal fractures of the femoral head, extending the limbs into the routine position can actually reduce the fracture and render the fracture indistinguishable from the normal limb. In this case, the frog-leg ventrodorsal image should be used to confirm the fracture.

Positioning
Use a V-trough to help keep the patient’s vertebral column and sternum aligned (Figure 3). As with standard ventrodorsal images, avoid superimposed artifacts caused by the V-trough by placing the entire pelvis past the edge of the trough onto the x-ray table, which also decreases geometric magnification. 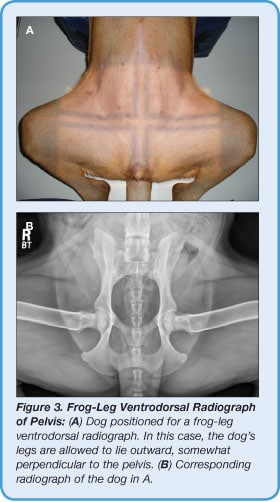 Established in 1966, the Orthopedic Foundation for Animals’ (OFA) mission has been to:

For more detailed information regarding OFA certification, registry, details on radiographic requirements, and forms, veterinarians and/or technicians can visit offa.org.

For quality control of any diagnostic image, keep a simple 3-step approach in mind:

Given that the desired technique has been attained, make sure that the appropriate anatomy is included: the lateral and ventrodorsal projections should include the cranial aspect of the iliac crest, pelvis, coxofemoral joints, and the proximal tibia, including the stifle joints. 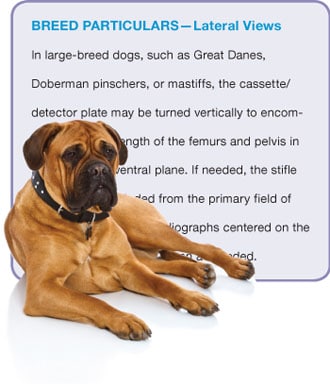 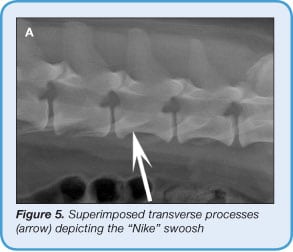 Pelvic radiographs are used in:

High-quality, correctly positioned radiographs are required in order to provide an accurate assessment, especially for surgical implant planning. A routine radiographic series of the pelvis should include a lateral and ventrodorsal view. Choosing the lateral projection used depends on the side of lameness and whether pelvic or femoral fractures are present. If the pelvic examination is routine, a right lateral of the pelvis is standard.

Following a consistent, repeatable pattern for obtaining pelvic radiographs ensures the quality of the images will be diagnostic.