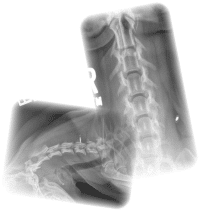 The following anatomic areas have been addressed in previous columns; these articles are available at todaysveterinarypractice.com (search “Imaging Essentials”).

Spinal radiographs are indicated for:

Each radiographic projection is a separate study and should be radiographed as such. High quality, correctly positioned and collimated radiographs are required in order to provide an accurate assessment of the area of interest, especially for surgical planning.

As a general rule, general anesthesia or heavy sedation is necessary to evaluate the spine because, in most cases, spinal images taken in nonsedated patients are nondiagnostic. In addition, the presence or absence of disk space narrowing cannot be determined from a nonsedated animal’s radiographs due to unavoidable positioning artifacts.

Lateral and ventrodorsal views are considered the minimum orthogonal radiographs for the spine. Due to the angled, divergent nature of the x-ray beam, the area of the spine in the center of the field of collimation will be the area that provides the correct anatomic detail and intervertebral disk space widths.

If there is a suspected abnormality at the edge of the image, a repeat collimated image centered at the area of interest is required for complete evaluation. Recollimated images are important because they depict common areas of disease (ie, intervertebral disk spaces) that are typically at the edge of the film/image, which could be misinterpreted as narrowed due to the divergent nature of the x-ray beam.

Measure the thickest portion of the neck that is within the area of collimation.

Due to thickness differences of the cranial and caudal parts of the neck in large-breed dogs, such as Doberman pinschers, Great Danes, or mastiffs:

These techniques result in 2 separate radiographic images—cranial and caudal radiographs of the cervical spine.

For the lateral projection, position the patient in lateral recumbency (Figure 1). 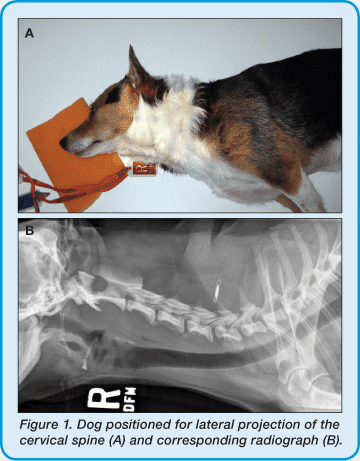 The collimated lateral image is centered over the cervicothoracic spine, and extends from the mid cervical spine (cranial limit of field of view [FOV]) to just caudal to the scapulohumeral joint.

For the lateral projection, the FOV excludes the ventral and dorsal soft tissues of the neck, only including the cervical vertebral bodies and immediate soft tissues adjacent to the spine.

The radiographic marker is placed along the dorsal and cranial aspect of the collimated FOV. 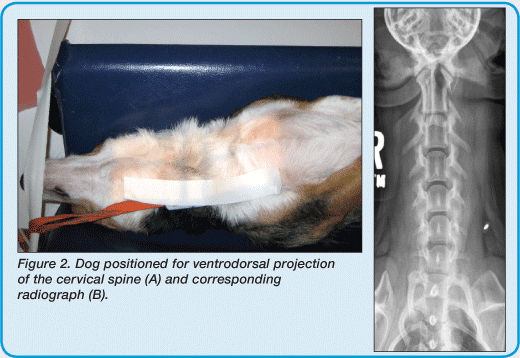 The caudal ventrodorsal projection used for large-breed dogs (see Ventrodorsal Collimation) also serves as the collimated cervicothoracic image for all dogs and cats.

For the ventrodorsal projection, the FOV excludes the lateral soft tissues of the neck, only including the central cervical vertebral bodies and immediate soft tissues adjacent to the vertebral column.

The radiographic marker is placed along the right cranial aspect of the image in the collimated FOV.

Trauma or congenital malformation may cause atlantoaxial luxation or instability of the joint between cervical vertebra 1 and 2. To visualize the dens, an oblique projection from the lateral position is obtained.

If an atlantoaxial instability is suspected, it is imperative that care be taken not to luxate the vertebra further, resulting in spinal cord trauma. Sedation is highly recommended for these patients to avoid additional movement.

For collimation, the FOV is centered at the atlantoaxial joint. The cranial border is at mid skull, while the caudal border includes cervical vertebra 3 and 4.

Compression of the spinal cord due to abnormalities occurs mainly in large-breed dogs and affects the caudal cervical vertebrae and their articulations, resulting in paraparesis, tetraparesis, or ataxia. The large-breed dog will need a cranial and caudal projection as with a naturally positioned cervical spine projection.

For both projections, position the patient in lateral recumbency, with the forelimbs taped and pulled caudally.

For the extended projection (Figure 4), push the skull and cervical spine dorsally. 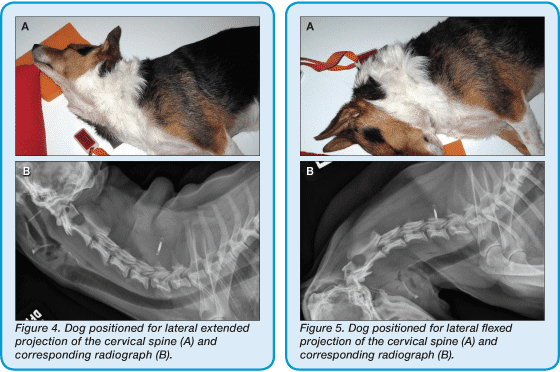 For the flexed projection (Figure 5), pull the skull and cervical spine ventrally toward the forelimbs.

For collimation, due to the flexion and extension of the cervical spine, the FOV includes most of the soft tissues of the neck.

Subtle lesions, fractures, and intervertebral disk disease are a few of the conditions that may require a ventrodorsal oblique projection of the spine.

For quality control of any diagnostic image, follow a simple 3-step approach:

To make certain the desired technique has been achieved, use the following guidelines to determine whether the appropriate anatomy is included in the images.

For both lateral and ventrodorsal projections of the cervical spine:

For the lateral projection of the cervical spine:

For the ventrodorsal projection of the cervical spine: