This case involves a Welsh springer spaniel that was diagnosed with sporotrichosis, a rare fungal infection.

Sporothrix schenckii complex fungi are disseminated worldwide and live in soil and organic plant matter. These dimorphic fungi cause sporotrichosis, commonly known as “rose gardener’s disease,” when hosts (most commonly humans or cats) come into contact with their spores.1 In uncomplicated infections, lesions are typically limited to the site of infection, such as the skin (following skin trauma) or respiratory tract (following inhalation). In more severe cases, disseminated sporotrichosis may occur. In disseminated sporotrichosis, multiple organs (e.g., skin, joints, lungs) may be affected; immunocompromise may predispose to this outcome.2,3 This case report describes sporotrichosis in an immunosuppressed dog.

The Today’s Veterinary Practice editorial staff will choose 6 finalists whose case reports will be published from November 2021 through December 2022. TVP’s Facebook followers will then select the grand prize winner from among the finalists; the Case Report Challenge winner will receive a free registration to VMX 2023.

A 5-year-old, 15.6-kg, female spayed Welsh springer spaniel presented to a referral hospital for evaluation of progressive nasal discharge, episodes of difficulty breathing, shifting leg lameness, and skin lesions. Approximately 3 months prior, the dog had been evaluated by a primary veterinarian for a skin lesion on the distal thoracic limb that did not improve with treatment with anti-inflammatory doses of prednisone, amoxicillin-clavulanate, and doxycycline. The non-healing lesion was subsequently biopsied, and histopathology showed follicular dysplasia and lymphoplasmacytic and mast cell dermatitis. Additional cutaneous lesions then appeared, primarily on the dorsum of her thoracic paws and along her trunk. Intermittent lameness also developed; the dog remained ambulatory but would periodically favor her left or right thoracic limb, which interfered with her ability to go on walks. The dog was treated with 1.3 mg/kg prednisone and 3.2 mg/kg cyclosporine for suspected autoimmune disease.

Simultaneously, the dog developed bilateral serous nasal discharge and stertor. The nasal discharge and skin lesions worsened despite treatment, and the clinical presentation progressed to intermittent dyspnea and multifocal crusting skin lesions, along with shifting leg lameness. The dog had previously been healthy and lived in an indoor–outdoor environment in Nebraska, with no recent history of travel.

On evaluation at the referral hospital, the dog’s vital parameters—including temperature, heart rate, respiratory rate, capillary refill time, and pulse oximetry—were within reference ranges. The dog was quiet, but alert and friendly. Bilateral serous to mucoid ocular and nasal discharge with patent nares was noted, and there was normal retropulsion of the eyes. Stertor was appreciated intermittently. The dog was eupneic with normal lung sounds in all fields.

There were multifocal nonpruritic ulcerated skin lesions and crusts located primarily along the trunk and dorsum as well as the thoracic limbs (FIGURES 1 AND 2). The dog was hesitant to move during the examination and exhibited shifting leg lameness when her gait was assessed. The right carpus was painful on flexion with palpable effusion. The mandibular, superficial cervical, and popliteal lymph nodes were firm and mildly enlarged. Results of fundoscopic and neurologic examinations were normal. The remainder of the physical examination was unremarkable. 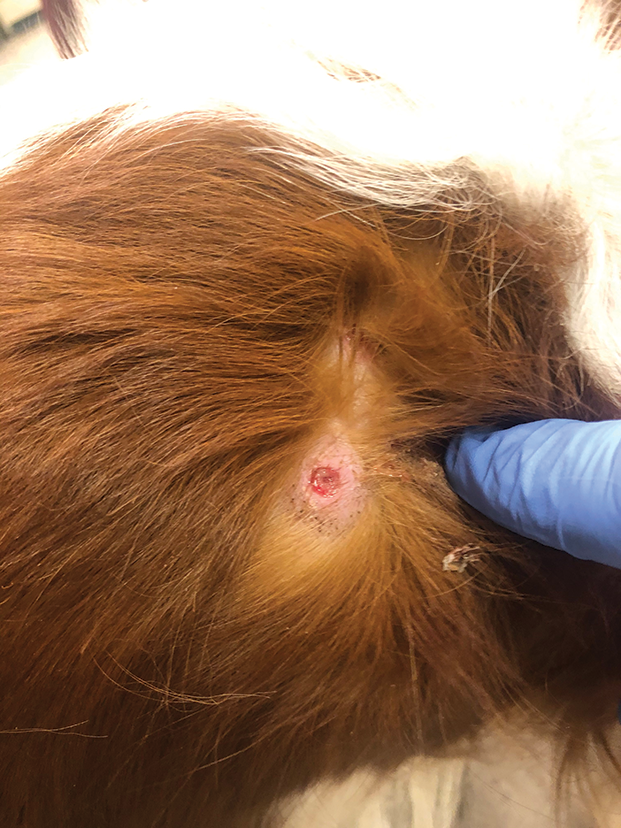 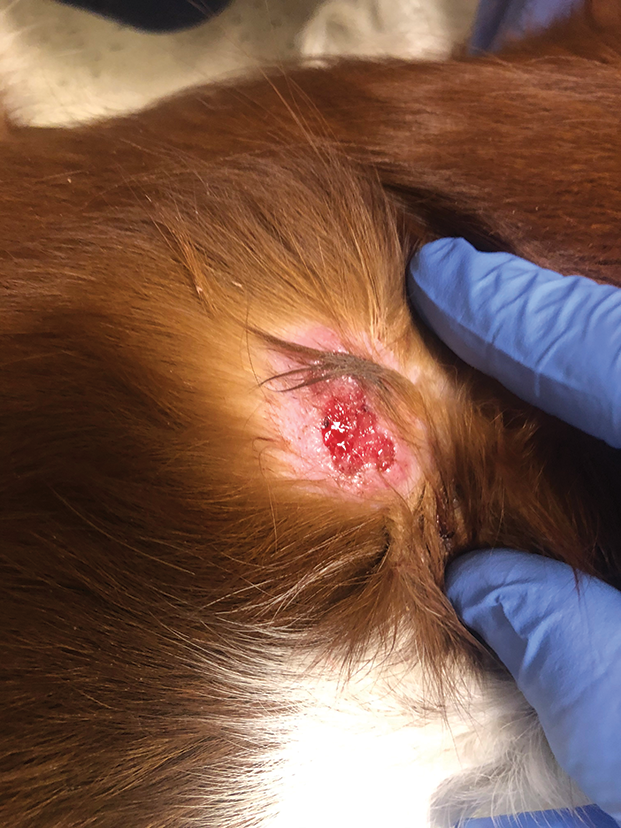 Given the concurrent cutaneous lesions, arthropathy, and nasal disease that progressed in the face of immunosuppressive drug treatment, systemic infectious diseases were the top differentials, with fungal infection considered most likely. Neoplastic diseases such as cutaneous lymphoma with paraneoplastic polyarthropathy were also considered. Immune-mediated disease could also explain the multisystemic involvement but was considered less likely given the progression in the face of immunosuppression. The initial diagnostic approach focused on assessing systemic health and obtaining samples of the lesions to search for cytologic evidence of infectious disease or neoplasia.

On primary presentation, point-of-care diagnostic tests were performed, including measurement of venous blood gases and packed cell volume/total solids. All parameters were within the reference ranges. Focused point-of-care abdominal and thoracic ultrasonography revealed no free fluid or pulmonary abnormalities. A complete blood count, serum biochemical profile, urinalysis, and total thyroxine test were also completed, revealing a mild monocytosis (1.98 × 103/µL; reference range, 0.15 to 1.35) and 3+ proteinuria. All other laboratory results were unremarkable. 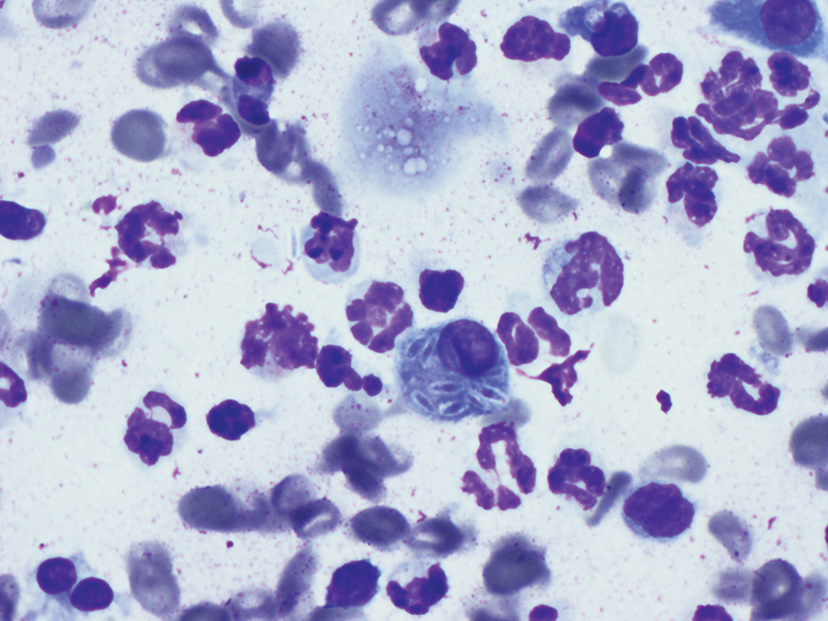 Figure 3. Impression smear obtained from lesion in Figure 2 using Diff-Quik stain at 100× magnification. Marked pyogranulomatous inflammation was revealed, along with an abundance of intracellular organisms consistent with Sporothrix species.

Thoracic radiographs were obtained to assess for evidence of fungal infection of the lower respiratory tract and showed equivocal generalized cardiomegaly and a diffuse mild bronchointerstitial pattern as well as hepatomegaly consistent with the history of glucocorticoid use. An echocardiogram was offered to assess for dilated cardiomyopathy since the patient had a history of being fed a grain-free diet and there was concern for cardiomegaly on radiographs, but the owners declined.

The antifungal drug itraconazole was prescribed at a dose of 6.4 mg/kg PO q24h. Due to concern for pulmonary involvement, hospitalization was recommended to monitor for respiratory distress secondary to acute inflammation following death of pulmonary yeasts in response to treatment. Outpatient care was elected as an alternative, and the owners were instructed to monitor closely for clinical deterioration and evidence of dyspnea or tachypnea.

Cyclosporine was discontinued, and instructions were given to taper and discontinue prednisone. Additionally, gabapentin was prescribed at 12 mg/kg PO q8h to q12h for management of pain associated with arthropathy. The owners were instructed to follow up with their primary care veterinarian in 2 weeks to evaluate response to therapy and to monitor liver enzymes during itraconazole treatment, with similar monitoring appointments at 1- to 2-month intervals thereafter.

Sporotrichosis is an uncommon diagnosis in canine patients. The mechanism of infection is thought to be through cutaneous inoculation, such as via a wooden splinter or contact with an infected cat.2 Dogs with sporotrichosis most commonly develop a cutaneous form of the disease with cutaneous nodules, plaques, ulcerations, and draining tracts.3,4 The second most common clinical manifestation in the dog is respiratory, with nasal or pulmonary signs.1 Rarely, disseminated disease is seen in dogs, with involvement of multiple organ systems, which can include the spleen, liver, kidneys, eyes, bones, and joints.1

Canine sporotrichosis is a challenging diagnosis. The rarity of the disease in this species means it is an uncommonly considered differential. In addition, the numbers of organisms seen in dogs, in contrast to cats, are typically quite low. For this reason, yeasts can be missed with routine cytologic examination and sometimes even histopathology.5,6 Multiple diagnostic tests may be needed for diagnosis, including periodic acid–Schiff or Grocott methenamine silver staining of sections for histopathology to highlight the fungal organisms, as well as fungal culture of affected tissues.1,6

In the case described in this report, it is not clear whether the original skin lesion that was biopsied represented an early Sporothrix lesion that was subsequently exacerbated by immunosuppressive drug treatment, or if the lesion was an unrelated skin condition and the dog acquired sporotrichosis later, following immunocompromise. Given that most reported cases of canine sporotrichosis involve immunocompetent dogs, the latter scenario seems less likely.4,5

While the histologic findings of the distal thoracic limb lesions were not consistent with the typical histologic appearance of sporotrichosis (pyogranulomatous inflammation), it is possible that the biopsy sample was not representative of the entire lesion; furthermore, the lack of infectious organisms noted was not unusual, given the typical scarcity of Sporothrix yeasts in dogs. Fungal culture of the biopsied tissue might have been helpful in this case. Additionally, the location of the original lesion on the paw could be consistent with introduction of Sporothrix via a wound. While the immunosuppressive therapy appeared to contribute to development of disseminated sporotrichosis, it also increased organism numbers and allowed for an ultimate diagnosis via cytologic examination. Concurrent discontinuation of immunosuppressive drugs and implementation of antifungal drug therapy likely contributed to rapid recovery.

For this patient, a presumptive diagnosis of disseminated sporotrichosis was made based on cytologic examination of skin lesions. The concurrent nasal signs were presumed to be a manifestation of sporotrichosis infection based on previous reports and response to treatment.2,7 It was not certain whether the arthropathy represented actual Sporothrix joint infection, a secondary immune-mediated arthropathy, or an unrelated issue. Arthrocentesis was discussed with the owner and was initially declined in favor of trying treatment for sporotrichosis; it was ultimately not pursued owing to resolution of joint pain along with other clinical signs.

Sporotrichosis infections in humans often result from cutaneous trauma after contact with contaminated plant matter; however, sporotrichosis is unique among fungal infections because it is also a zoonosis.8 Most cases of zoonotic transmission appear to be the result of contact with infected cats.8,9 While transmission from dogs to humans is rare, it has been reported between infected dogs and their caregivers.10 The owners of this dog were informed of the risk and instructed to wear gloves when in contact with the skin lesions and to wash hands thoroughly after handling the dog.

Sporotrichosis is an uncommon disease in dogs that can evade diagnosis and can mimic other conditions such as immune-mediated skin diseases, neoplasia, and infectious diseases such as blastomycosis or cryptococcosis. Sporotrichosis should be considered for all dogs with multifocal ulcerative skin lesions, and care should be taken to consider the relatively low sensitivity of cytology in many canine cases, with inclusion of additional diagnostics such as staining for fungal organisms and tissue fungal culture for suspicious cases. Immunosuppression may affect progression of this disease, but the prognosis can be good with recognition and appropriate therapy.