Evaluation and Management of the Hyperkalemic Patient

Resuscitative and/or replacement fluids should be provided to any patient with hyperkalemia and a fluid deficit.

Dr. Heinz obtained his DVM from Purdue University. He completed an internship at LSU and a residency in emergency and critical care at Texas A&M University. After a year in private referral practice, Dr. Heinz joined the faculty at Texas A&M College of Veterinary Medicine & Biomedical Sciences. His clinical interests include transfusion medicine, sepsis, acute kidney injury, and renal replacement therapies.

Hyperkalemia is defined as a plasma or serum potassium concentration (i.e., [K]) in excess of the established reference range and is commonly encountered in companion animal practice. The causes of hyperkalemia are generally classified as (1) increased potassium input, (2) decreased potassium excretion, and (3) translocation from intracellular to extracellular compartments.

Clinically significant hyperkalemia is most often the result of impaired potassium excretion, usually due to compromise to the kidneys/urinary tract or to hypoaldosteronism.1 Mild hyperkalemia (i.e., [K] above the reference range but <6 mmol/L) may be noted in patients with third spacing of fluids (e.g., pleural effusion, ascites, pregnancy) or colonic parasitism (primarily Trichuris vulpis); this is thought to reflect systemic volume loss, increased secretion of antidiuretic hormone, and decreased fluid delivery to the distal convoluted tubules of the kidneys.2 Because more than 95% of the body’s potassium is located within the intracellular compartment, serum concentrations may be increased by disorders that impact intracellular translocation, such as insulin deficiency, or by the release of potassium from damaged cells, particularly myocytes.3 Excessive dietary intake is not a recognized cause of hyperkalemia because healthy patients can tolerate significant amounts of oral intake.

The potassium gradient between the intra- and extracellular compartments plays a key role in action potential generation by excitable cells. The impact of hyperkalemia is most clearly evident on the heart, ultimately resulting in disruption of cardiac muscle excitation and conduction followed by cessation of all electrical activity. Although the cardiac effects of increasing [K] are fairly predictable in experimental models, this is not the case in clinical patients wherein electrocardiogram (ECG) changes correlate poorly with serum [K].4 Mild hyperkalemia (<6 mmol/L) is usually of little clinical consequence, but [K] ≥6 mmol/L should be investigated, and values >7 mmol/L often require emergent intervention.

Increased [K] may be noted in serum samples with increased platelet counts (i.e., thrombocytosis), as potassium is released during aggregation.5 Alternatively, contamination of the serum or heparin tube with EDTA may cause marked increases in reported [K]; this is predictably accompanied by substantial hypocalcemia. Excessive hemolysis during sample collection or processing can also impact measured [K]; this may be more likely to occur in the Japanese breeds.

Compromise to the Kidneys/Urinary Tract

Surplus potassium is continuously excreted by the kidneys, and urine concentrations are severalfold higher than those of serum. Compromised excretion will predictably result in both hyperkalemia and azotemia. The magnitude of these changes is variable and depends on the underlying etiology:

Patients with chronic ascites, chronic pleural effusion, and even advanced pregnancy may become hyperkalemic.1,2,9-12 This is often associated with concurrent hyponatremia and should be quickly apparent on physical examination.

Infection with T vulpis has been associated with hyperkalemia. The mechanism of this phenomenon is unclear, and it has not been reported in dogs with other gastrointestinal parasites.13

This disease is uncommon in dogs and extremely rare in cats but is often associated with impactful hyperkalemia. Affected animals may appear to have an acute kidney injury (i.e., they are azotemic with poorly concentrated urine) but are somewhat polyuric and improve quickly with appropriate fluid therapy. The lack of a stress leukogram and a history of waxing and waning clinical signs should prompt adrenal function testing in a hyperkalemic and azotemic dog. A baseline cortisol >2 µg/dL excludes this possibility; an inadequate response to adrenocorticotropic hormone is required to establish this diagnosis.14

Mild hyperkalemia (<6 mmol/L) may result from metabolic acidosis, when hydrogen ions are moved to the intracellular space in exchange for potassium. This is more likely to occur in patients in which the decrease in pH is driven by an increase in inorganic/mineral acids (e.g., uremic acidosis) rather than those with increased organic acids (e.g., lactic acidosis, diabetic ketoacidosis), as inorganic acids dissociate more readily.

As insulin moves both potassium and glucose into cells, insulin deficiency (e.g., in patients with diabetic ketoacidosis) may result in hyperkalemia.15 This is usually mild, may be exacerbated by concurrent organic metabolic acidosis, and often masks a substantial total body potassium depletion.

Administration of potassium-sparing diuretics, angiotensin-converting enzyme inhibitors, and aldosterone receptor blockers, or excessive supplementation of IV fluids, may increase [K]. Hyperkalemia has been occasionally reported in dogs undergoing general anesthesia. The mechanism or mechanisms for this phenomenon are unclear, but it appears that some neuromuscular blockade agents (e.g., succinylcholine) and intravenous anesthetics (e.g., propofol) may play a role.16

The primary consequence of increased [K] is decreased cardiac electrical activity as a result of sustained depolarization of the myocytes. As [K] increases, T waves become tall and tented or become deeper and more negative, and P waves become progressively smaller and wider and ultimately disappear as atrial standstill occurs. Eventually, wide and aberrant QRS complexes are noted, and the heart rate slows and often becomes irregular (FIGURE 1). Eventually, hyperkalemia terminates all spontaneous electrical activity within the heart. 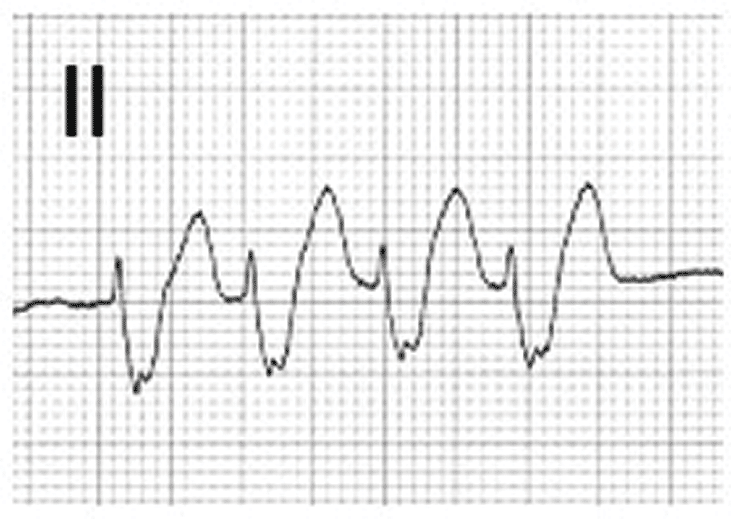 An ECG should be performed on any patient with suspected or confirmed hyperkalemia. In addition, it is important to try to establish the cause; this may be readily apparent on initial evaluation (e.g., urethral obstruction) or may require targeted diagnostics (e.g., ultrasonography, abdominocentesis, adrenal function testing). At a minimum, a thorough patient history and physical examination, along with a careful review of other routine laboratory data (complete blood count, serum biochemical profile, urinalysis) are indicated.

See FIGURE 2 for an algorithm showing evaluation of the hyperkalemic patient. 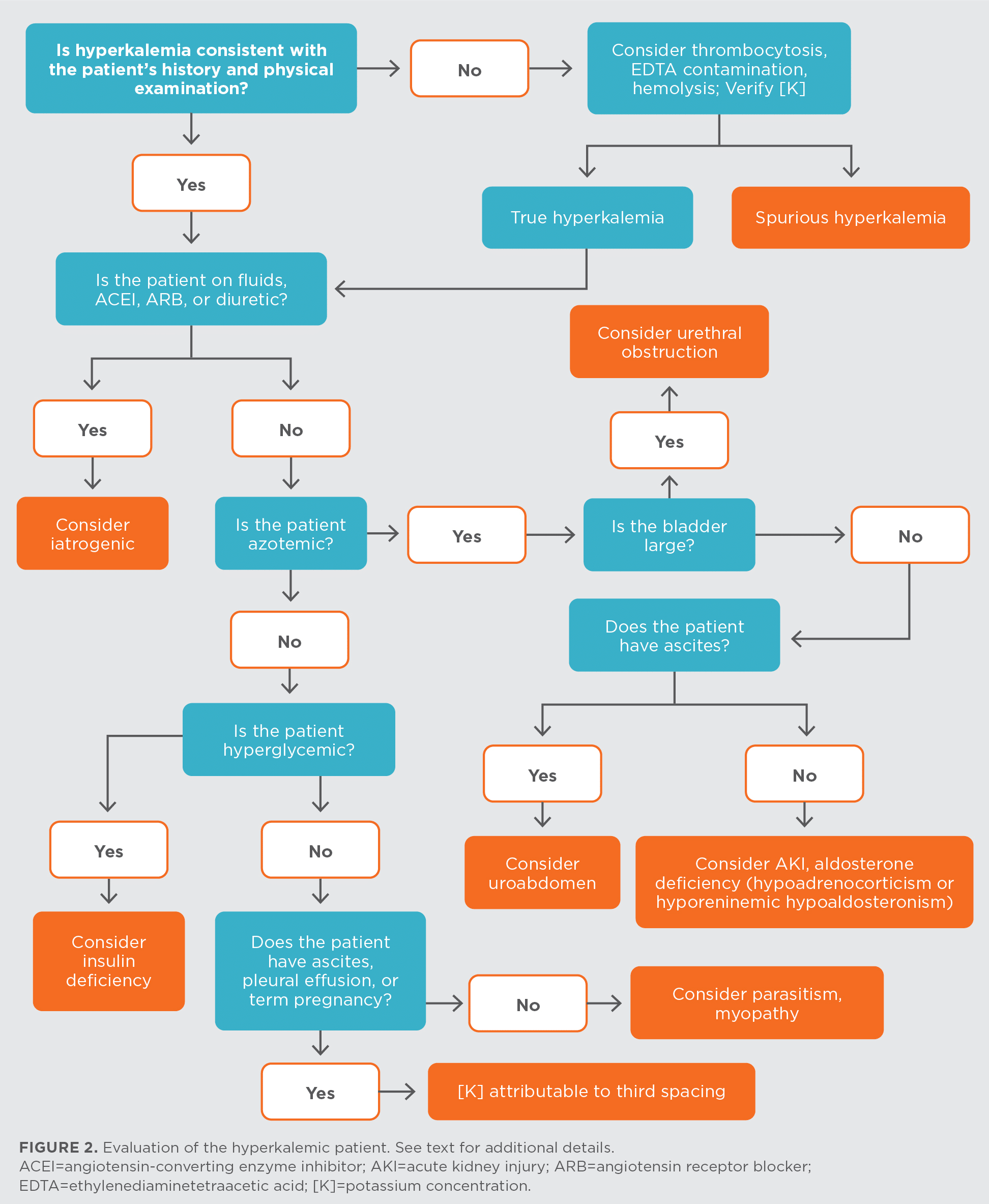 As a general rule, treatment decisions are guided by ECG findings. However, severe hyperkalemia (i.e., [K] >7 mmol/L) should always be addressed, even if the patient’s ECG is unremarkable. Specific management of the underlying cause should be instituted as soon as possible. Depending on the severity of the hyperkalemia and time needed to address the underlying cause, the authors commonly administer combinations of the options listed below (e.g., calcium gluconate and terbutaline; terbutaline and dextrose/insulin).

Resuscitative and/or replacement fluids should be provided to any patient with hyperkalemia and a fluid deficit. Although the only potassium-free replacement fluid is 0.9% sodium chloride (NaCl), the amount of potassium in balanced fluids such as lactated Ringer’s solution (LRS) is clinically insignificant (4 mEq/L). The authors prefer LRS in hyperkalemic patients because its lower chloride concentration and buffering capabilities may be advantageous. In addition, the sodium concentration of the fluid chosen should be considered carefully in patients with concurrent hyponatremia (e.g., dogs with hypoadrenocorticism); for more information, see “Evaluation and Management of the Hyponatremic Patient” in the March/April 2022 issue of Today’s Veterinary Practice.

Dextrose: Glucose administration will move potassium into cells by turning on the insulin-dependent glucose:potassium cotransporter. An initial bolus of 1 mL/kg of dextrose 50% (diluted 1:4 if given directly into a peripheral vein) can be followed by a constant rate infusion (50 mL of dextrose in 1 L = 2.5% dextrose).

Terbutaline: β-adrenergic agonists move potassium into the intracellular compartment; the authors recommend terbutaline at 0.01 mg/kg IM or slow IV. An improved [K] is often noted within 20 to 30 minutes and persists for several hours.17 Inhaled albuterol can be used if terbutaline is not available but is less likely to provide a significant response.

Insulin: Administration of exogenous insulin will boost the effect of dextrose administration, but the two must be balanced carefully (0.5 U/kg of regular insulin IV plus 2 g/kg dextrose [4 mL/kg of dextrose 50%] IV). Insulin may be particularly potent in dogs with hypoadrenocorticism; therefore, additional glucose might be necessary to counteract any hypoglycemia.

Calcium gluconate: This does not lower [K] but instead mitigates the cardiac effects of hyperkalemia. The dose is 5 mg/kg of elemental calcium (approximately 0.5 mL/kg of a 10% solution) given IV over 20 minutes. The ECG should be monitored during administration in case of cardiotoxicity (e.g., worsening bradycardia, cardiac arrhythmia). The effect is the most rapid onset of any intervention listed but lasts less than 60 minutes, as the calcium is rapidly buffered by bone.

Sodium bicarbonate: This will increase extracellular pH, resulting in the movement of protons out of cells in exchange for potassium. The dose is 1 to 2 mEq/kg IV over 15 minutes. The 8.4% solution (1 mEq/mL) is hyperosmolar and should be diluted 1:4 prior to administration. Concerns with this option include metabolic alkalosis and paradoxical central nervous system acidosis.

See FIGURE 3 for an algorithm of the management of the hyperkalemic patient. 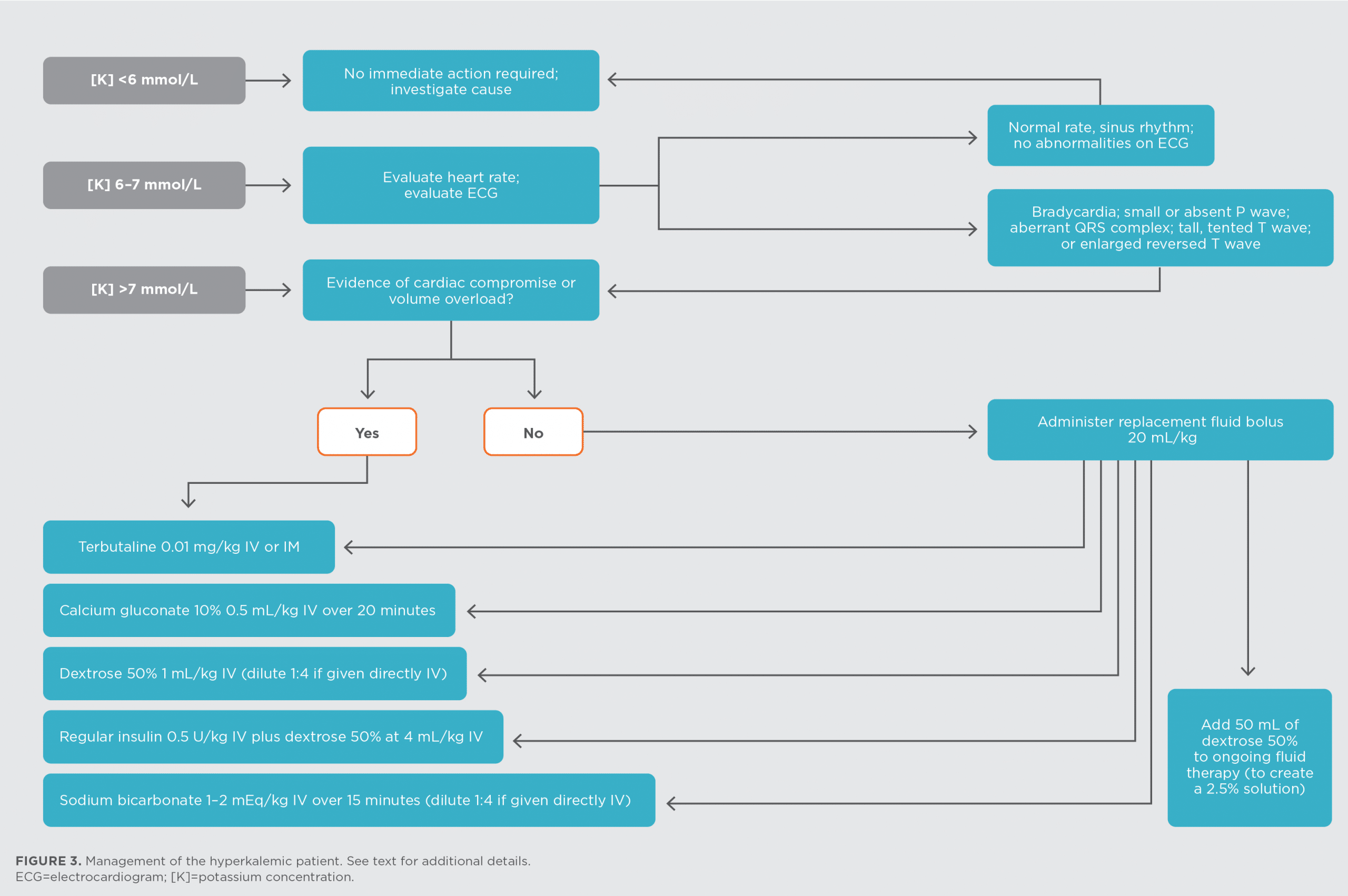 A 2-year-old neutered male Dalmatian weighing 25 kg was presented with a 2-day history of repeated efforts to urinate. The dog had been intermittently dysuric for the previous 2 to 3 weeks.

On physical examination, the dog was quiet and depressed. Body temperature was 99.7oF, heart rate was 88 beats/min with an irregular rhythm, and dehydration was estimated at 5%. The urinary bladder was large and firm.

Severe hyperkalemia should be assumed in any patient with evidence of urethral obstruction and bradycardia. Emergent management for this issue should be instituted while confirmatory testing is being performed. Intravenous fluid therapy should be started immediately, along with dextrose and terbutaline, while diagnostics such as blood analysis and ECG are being performed. These interventions are unlikely to have any deleterious effects in a normokalemic patient and may be lifesaving in a hyperkalemic animal.

There is sometimes a tendency to focus on relieving the urethral obstruction in these circumstances, but this may be difficult and possibly require sedation. The authors feel that the first priority is to mitigate the hyperkalemia; efforts to pass a urinary catheter should be postponed until the patient is more stable. If necessary, a decompressive cystocentesis may be performed to reestablish glomerular filtration and facilitate potassium excretion. There is little information on this procedure in dogs; however, studies in cats support its use.18,19

The patient’s heart rate increased to 118 beats/min by the end of the fluid bolus, and P waves were larger. A calcium gluconate infusion (0.5 mL/kg of 10% = 12.5 mL) was prepared but not administered because the dog appeared stable. Fluid therapy was continued with LRS plus 2.5% dextrose at 175 mL/hr.

The patient was sedated with butorphanol (0.2 mg/kg IV) and an 8F red rubber catheter was advanced to the level of the proximal os penis, where an obstruction was identified. Sterile saline was used to retropulse a solitary urolith into the urinary bladder. More than 500 mL of urine was drained and an indwelling Foley catheter was placed. Serum [K] was 6.4 mmol/L approximately 45 minutes after initiation of therapy and continued to decline over the next several hours. A cystotomy was performed the following day and numerous urate stones were removed.

Evaluation and Management of the Hypernatremic Patient

Evaluation and Management of the Hyponatremic Patient