Behavior changes in older patients can indicate underlying medical issues, diminishing sensory capacities, age-related cognitive decline, a primary behavioral disorder, or a combination of these. Behavior problems can cause significant suffering for the patient, may challenge the caregiver’s ability to care for the pet, and may prompt the caregiver to relinquish or euthanize the pet. Early diagnosis and treatment are critical.

Cognitive functions include the mental processes of perception, awareness, learning, and memory, which allow an individual to acquire information about the environment and decide how to act. Cognitive dysfunction syndrome (CDS) is a neurobehavioral disorder affecting geriatric dogs and cats that is characterized by an age-related decline in cognitive abilities sufficient to affect functioning, with behavior changes that are not attributable to other medical conditions. The prevalence of CDS in dogs is extremely high, ranging from 28% in 11- to 12-year-old dogs to 68% in 15- to 16-year-old dogs.1 The prevalence of CDS in cats was 36% in a population of 11- to 21-year-old cats. The incidence of behavior changes increased with advancing age: Fifty percent of cats aged 15 years and older showed behavior changes versus 28% of cats aged 11 to 14 years. The most common behaviors seen in the 11- to 14-year-old age group were alterations in social interactions. In cats aged 15 years and older, the most common signs were aimless activity and excess vocalization.2

CDS is underdiagnosed because caregivers may assume behavior changes are a result of normal aging, and veterinarians may not recognize the signs. In a large cross-sectional study of dogs aged 8 to almost 20 years, researchers investigated the prevalence of canine cognitive dysfunction, along with the rate of veterinary diagnosis.3 On the basis of owner questionnaire data, the prevalence rate of CDS was estimated to be 14.2%. However, only 1.9% of cases were diagnosed by a veterinarian. The prevalence of CDS exponentially increased with age but did not differ by breed.3

Cognitive dysfunction syndrome (CDS) is underdiagnosed because caregivers may assume behavior changes are a result of normal aging, and veterinarians may not recognize the signs.

CDS is an antemortem diagnosis of exclusion. Caregiver interviews using questionnaires (Table 1) are an important tool for assessing geriatric patients. It is important to exclude other systemic diseases that could account for clinical signs before reaching a diagnosis. 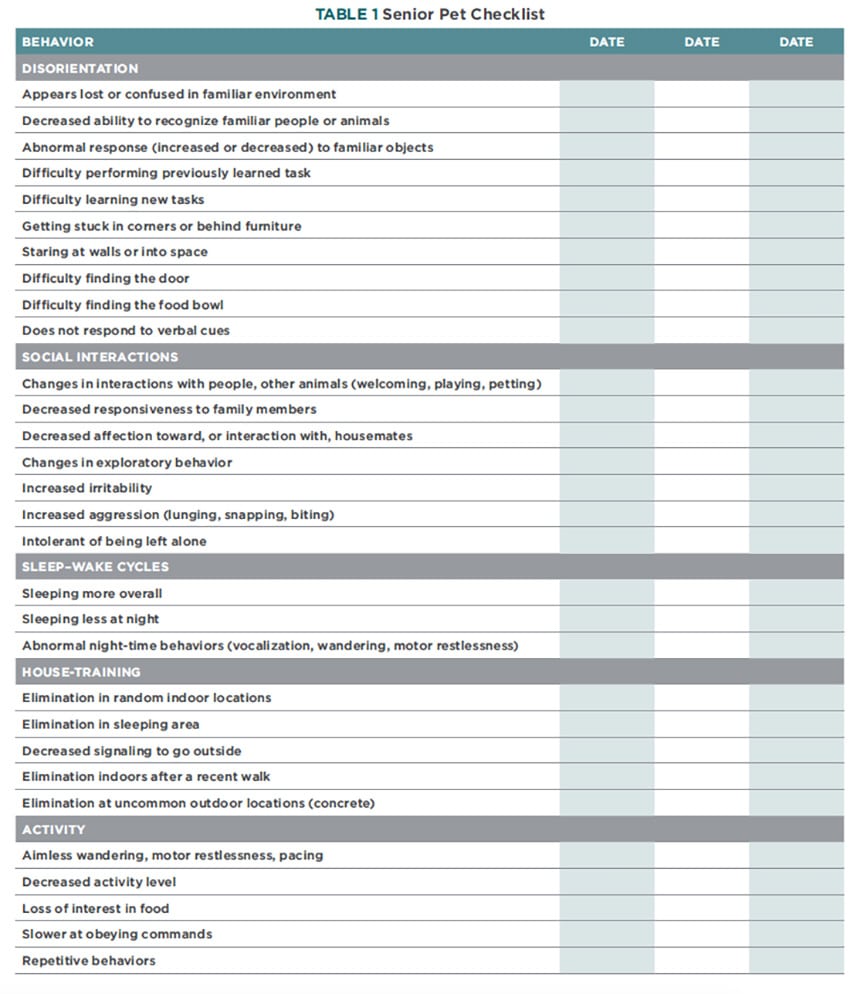 Aging affects all organ systems, and changes in many systems can present with behavioral signs (Box 1). Human patients with Alzheimer’s disease often exhibit movement disorders, including restlessness, impaired gait, and tremors. Concurrent behavioral and neurologic signs in aging canine patients have also been documented. In a study of 21 dogs older than 7 years, those with CDS were twice as likely to show neurologic deficits as dogs without CDS.4

Senior-pet checklists typically include questions about disorientation, social interactions with humans and other animals, sleep–wake cycle changes, house soiling, and changes in activity levels. Locomotor and exploratory behaviors vary as a function of age and cognitive status. One study administered two tests to 85 dogs varying in age and cognitive status to explore their locomotor and exploratory behaviors.5 Cognitively impaired older dogs had higher locomotor activity and spent more time in aimless activity than young dogs (younger than 9 years); the more severe the cognitive impairment, the higher both of these measures were. Older dogs also demonstrated an age-dependent decline in exploratory behavior.5

Changes in social interactions with owners and other animals are frequently observed in dogs with CDS. Another pair of tests was administered to assess social responsiveness in dogs of varying ages and cognitive status.6 Social responsiveness was primarily affected by age but was also influenced by severity of cognitive impairment. Young dogs engaged in more physical contact with humans and more vocalizations in response to social isolation, but aged dogs spent more time near a mirror, suggesting a deficit in habituation to the reflection of a dog image.6

Rating scales are essential tools for CDS diagnosis and evaluation of the efficacy of therapeutic strategies. An ideal rating scale is simple and quick to administer, statistically validated, and applicable to all stages of the disease. The validity and reliability of scales should be evaluated before use.

The brain consumes 20% of the body’s total oxygen. Its high percentage of polyunsaturated fatty acids and lower levels of endogenous antioxidant activity make it very susceptible to oxidative damage. Cellular metabolic processes release reactive oxygen species, which can lead to oxidative damage to proteins, lipids, DNA, and RNA, resulting in neuronal death. Normally, the activity of endogenous antioxidants balances the production of toxic free radicals. However, protective mechanisms begin to fail with age. Oxidative damage is associated with cognitive decline in dogs. An increase in oxidative end products in the brain of aged dogs correlates with more severe behavioral changes.9

The brains of older mammals show several anatomic and physiologic changes. These include a reduction in overall brain mass (including atrophy of cerebral cortex and basal ganglia), a reduction in the number of neurons, generalized gliosis, degeneration of white matter, demyelination, neuroaxonal degeneration, increases in ventricular size, meningeal fibrosis and calcification, and the presence of β-amyloid (Aβ) plaques. Functional changes include depletion of catecholamine neurotransmitters (norepinephrine, serotonin, and dopamine), a decline in the cholinergic system, an increase in monoamine oxidase B (MAO-B) activity, and a reduction of endogenous antioxidants.10

In both diseases, the aged brain develops an abnormal Aβ deposition in brain parenchyma and the walls of the cerebral blood vessels. Aβ is a protein produced by the degradation of amyloid precursor protein. The prefrontal cortex is the first area affected, followed by the temporal cortex, the hippocampus, and the occipital cortex. Regardless of position, the amount and extent of Aβ deposits correlate with the severity of cognitive impairment.12

The environment may need to be modified to accommodate the aging pet’s needs and improve comfort. Resources need to be easily accessible. Litterboxes may need to be placed in additional locations. Older dogs may require more opportunities for elimination, either outdoors or in an indoor elimination area. If nocturnal waking is a problem, owners should increase the pet’s daytime exercise and reduce disturbances in the evening. Geriatric pets may be less tolerant of children and other household pets and should be provided with protected resting areas. Older pets may also be less tolerant of environmental changes and may require behavioral assistance if changes induce anxiety-related problems.

Behavioral modification is similar to approaches used for younger pets, but with some limitations or constraints. Padded surfaces for sitting and traction for movement may help. If the pet is in pain, “stand” or “look” commands may replace frequent “sit” or “down” cues. Owners may need to adjust behavior signals used in training if sensory dysfunction is significant, including tactile cues or hand signals. More powerful motivators for learning may be needed, including the use of high-value food rewards.

Although no equivalent feline diet is available, Hill’s Prescription Diet Feline j/d, which is designed for cats with osteoarthritis, is supplemented with antioxidants and essential fatty acids. This diet may be useful for cats with signs of cognitive decline.

Glucose is the main energy source of neurons. However, glucose metabolism is reduced with aging. Other energy sources, such as ketone bodies, may be needed to maintain neuronal metabolism. Dietary medium-chain triglycerides (MCTs) can increase the levels of ketones in the blood, which can be used as an alternate energy source for cerebral functioning. Fatty acids derived from MCTs could provide up to 20% of the brain’s energy requirements.16 Long-term supplementation with MCTs has improved cognitive function in aged dogs (Purina One Vibrant Maturity 7+ Senior Formula, Purina ProPlan Veterinary Diet NC NeuroCare; purina.com). Dogs given a diet supplemented with 5.5% MCT for 8 months showed significantly better performance on cognitive tasks than control dogs.17 Diets supplemented with this type of lipid also reduce levels of Aβ deposits and improve mitochondrial function.18

Phosphatidylserine is a natural phospholipid in cell membranes and is found at high concentrations in the brain and at synapses. It facilitates membrane-dependent neuronal processes; enhances acetylcholine release; inhibits loss of muscarinic receptors; activates synthesis and release of dopamine; and may improve memory, learning, and social behavior in dogs and cats.19

Dysregulation of intracellular calcium is associated with increased age and may be linked to CDS in dogs. Apoaequorin is a calcium-buffering protein with neuroprotective effects (Neutricks; quincybioscience.com). Aged beagles given apoaequorin at doses of 2.5 mg or 5 mg were better able to complete discrimination learning and attention tasks than the placebo group.22 Dogs treated with 10 mg apoaequorin showed superior performance on cognitive tasks compared with dogs receiving 1 mg/kg selegiline.

S-Adenosyl-l-methionine (SAMe) is an endogenous molecule synthesized by the liver and other cells throughout body and formed from the amino acid methionine. SAMe is essential for the major biochemical pathways and metabolic reactions in the liver. Exogenous SAMe increases endogenous production of the antioxidant glutathione, resulting in increased serotonin turnover and increased dopamine and norepinephrine levels.

Pure SAMe is unstable and highly reactive, so commercially available oral forms of SAMe are salts (Novifit [virbac.com]; Denosyl, Nutramax [nutramaxlabs.com]). Oral bioavailability depends on the salt used. The presence of food in the gut can significantly decrease absorption, so SAMe should be administered on an empty stomach, 1 hour before feeding.

Oral SAMe tosylate supplementation (Novifit tablets) was evaluated as a dietary aid for the management of age-related cognitive decline in dogs.23 Dogs were administered placebo or 18 mg/kg SAMe tosylate for 2 months, with no associated behavior modification. SAMe-treated dogs showed significantly greater improvement in activity and awareness at 4 weeks and 8 weeks compared with placebo-treated dogs.23

Selegiline hydrochloride (Anipryl; zoetis.com) is approved for the control of clinical signs associated with canine CDS. Selegiline is a selective and irreversible inhibitor of the enzyme MAO-B. In the central nervous system, MAO-B is responsible for catabolism of catecholamines, dopamine, and, to a lesser extent, norepinephrine and serotonin. Inhibition of MAO-B results in increased levels of phenylethylamine, increased dopamine release, decreased uptake of dopamine and other monoamine neurotransmitters, antioxidant activity, and decreased free radical formation.

The approved dose of selegiline hydrochloride for dogs is 0.5 to 1.0 mg/kg q24h, to be given in the morning, dosed to the nearest whole tablet, with adjustments based on response and tolerance. The onset of action varies (4 to 12 weeks), and improvement may increase with extended use. Selegiline hydrochloride has been used off-label in cats with cognitive dysfunction at 0.25 to 0.5 mg/kg q24h.

Possible side effects include restlessness or agitation, vomiting, disorientation, or diarrhea. Selegiline should not be used in combination with other MAO inhibitors, including amitraz, opioids, α2 agonists, phenylpropanolamine, tricyclic antidepressants, selective serotonin reuptake inhibitors, or any other serotonergic agents (including trazodone, tramadol, and buspirone). At least 14 days should elapse between discontinuation of selegiline and initiation of treatment with a tricyclic antidepressant or selective serotonin reuptake inhibitor. Because of the long half-life of fluoxetine and its active metabolites, at least 6 weeks should elapse between discontinuation of fluoxetine and initiation of treatment with selegiline.

Memantine binds to N-methyl-d-aspartate receptors in the brain and blocks the activity of glutamate. Excessive glutaminergic activity resulting in neurotoxicity is suspected in the pathology of dementia. Memantine is used in the treatment of moderate to severe Alzheimer’s disease. It has been used in dogs to treat compulsive behaviors, at a dose of 0.3 to 1.0 mg/kg q12h.25

Dr. Seibert owns a behavior referral practice in Roswell, Georgia. She received her DVM degree from the University of Tennessee and completed her master’s and PhD degrees in psychology at the University of Georgia. After her conforming residency, she became board-certified with the American College of Veterinary Behaviorists (ACVB). She has taught behavior courses at 6 veterinary colleges. She is a past president of the American Veterinary Society of Animal Behavior and served 2 terms as secretary–treasurer on the ACVB Board of Regents. She has presented over 2000 hours of behavior education.