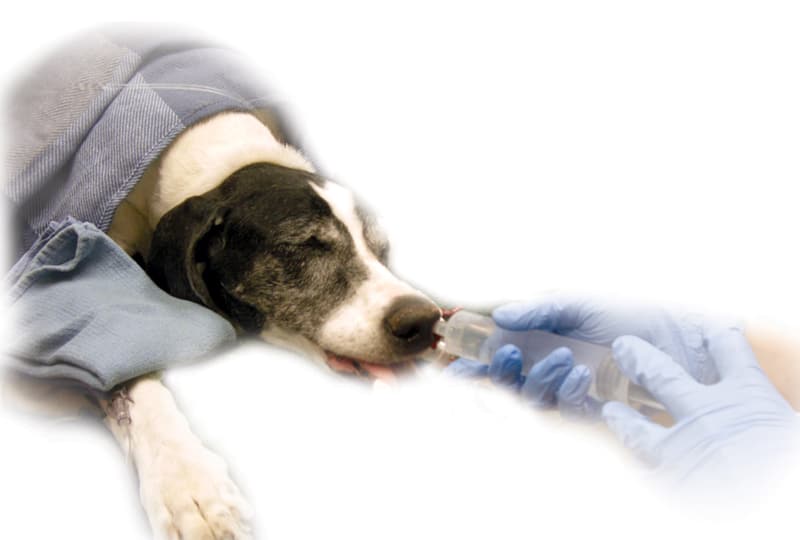 The dog was 1 of 3 dogs in the household. She was:

There was no history of weight loss, change in appetite, excess water consumption, or exposure to vitamin K antagonist rodenticide products. The other 2 dogs were healthy.

The dog had initially been seen at another veterinary hospital 5 months previously. At that time, the primary clinical complaints were a dry hacking cough and serous nasal discharge. Cervical and thoracic radiographs performed at initial presentation revealed no abnormalities.

The nasal discharge and cough resolved, but then recurred within 3 to 4 days of discontinuing the medications.

Therapy over the next 5 months included:

Two months after onset of clinical signs, the dog was sedated for nasal cavity flushing. A limited examination of the nares and rostral nasal cavity was performed with an otoscope head; no abnormalities were found. Skull radiographs were also performed and revealed increased radiopacity in the left nasal passage (Figure 1). 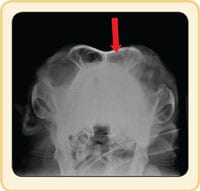 Antibiotics, glucocorticoids, and sedation did not prevent recurrence or progression of nasal discharge and cough. The unilateral nasal discharge continued, became purulent, and then hemorrhagic. At presentation to the referral hospital, the discharge had progressed to mild to moderate epistaxis.

When presented to our facility, the patient was bright and alert.

– The most relevant abnormalities were isolated to the upper respiratory system and included:

– The face appeared symmetrical; the left globe retropulsed normally without evidence of discomfort.
– No pain was elicited upon palpation of the frontal sinuses and nasal planum.
– The pigment around the nares appeared normal.

A complete blood count (CBC), serum biochemistry profile, prothrombin time (PT), and activated partial thromboplastin time (APTT) were performed by the referring veterinarian at onset of epistaxis, just prior to presentation to our facility, ruling out coagulapathies (ie, vitamin K antagonist rodenticide toxicity), polycythemia, and thrombocytopenia as causes of the epistaxis. See the Table for pertinent laboratory results.

Systolic, diastolic, and mean arterial blood pressure measured by noninvasive oscillometry were within normal reference ranges, ruling out systemic hypertension as a cause of epistaxis.
Because the patient had not traveled outside of Colorado, serum titers for infectious etiologies were likely to be low yield and were not pursued. 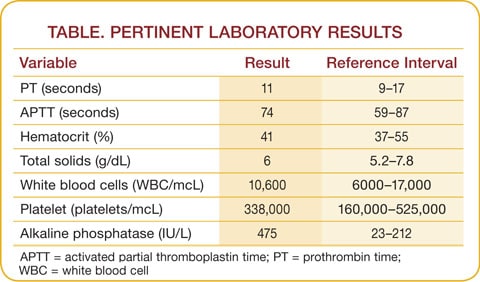 Thoracic radiographs and abdominal ultrasound were recommended to rule out metastatic neoplasia due to the history of cough, chronic nasal discharge, acute onset of epistaxis, and elevated alkaline phosphatase.

The client elected to pursue computed tomography (CT) of the nasal cavity and sinuses and rhinoscopy. The patient was anesthetized and a CT scan of the nose and frontal sinuses was performed. The scan showed a soft tissue mass in the left nasal passage that extended from the third premolar to the rostral portion of the nasal turbinates and palate (Figure 2). The cribiform plate appeared to be intact. At this time, a presumptive diagnosis of neoplasia was made, with nasal adenocarcinoma being most likely. 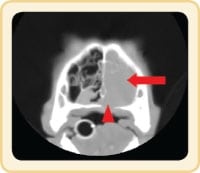 Figure 2. CT scan of patient demonstrating a soft tissue mass density in the left nasal passage (arrow) and destruction of the underlying hard palate (arrowhead); note that no evidence of hard palate destruction was palpable or visible on physical examination.

Rhinoscopy was performed with rigid and flexible endoscopes (Figure 3). A retroflexed view of the left nasal choana revealed an abnormal yellow-white, friable mass that extended rostrally from the level of the third premolar (Figure 4).

Samples of the mass were obtained with biopsy forceps and the rigid scope; then nasal hydropulsion (10 × 60 mL syringes sterile saline) was performed (Figure 5). A 4 cm × 1 cm × 1.5 cm mass was hydropulsed from the left nasal passage and retrieved from the oral cavity (Figure 6). Hemorrhage following biopsy and hydropulsion was minimal. The histopathologic evaluation revealed that the mass was a nasal carcinoma. 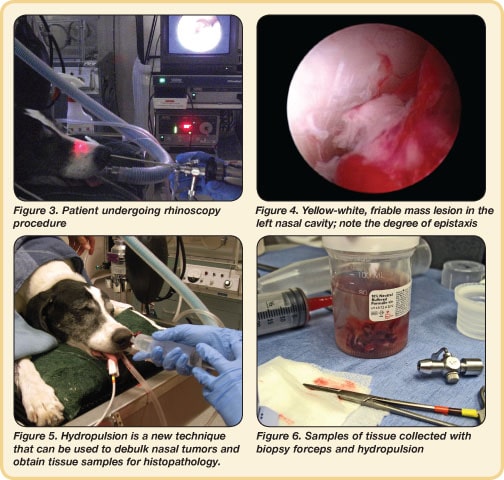 The dog was discharged with tramadol, 100 mg (3.9 mg/kg) PO Q 8 H, and piroxicam, 7.5 mg (0.56 mg/kg) PO Q 24 H, pending results of the histopathology. Following definitive diagnosis, the clients were given an option for referral for radiation therapy, which they declined. Piroxicam was continued at the same dose. Two months later, the dog is free of clinical signs, and described by her owners to be doing well.

*Bacterial rhinitis is usually secondary to another primary disease process

Epistaxis is a relatively common presenting complaint in both human and veterinary emergency rooms.2 In this case report, the pet owners sought additional diagnostic tests after 5 months of recurrent and progressive nasal discharge and coughing (caused by postnasal drip related to the nasal neoplasia) and when nasal discharge progressed to stertor and epistaxis.

The prognosis for dogs with untreated nasal carcinomas is poor.3 The results of several studies3,7 show that median survival of:

Surgical Debulking
Surgical removal of large masses from the nasal cavity without additional chemotherapy and/or radiation therapy does not provide additional survival benefit because the tumor has often invaded the surrounding bone. While surgery may improve airflow through the nostrils, in some cases, radical removal of a portion or all of the nose needs to be performed to remove the tumor. Aesthetically this may be objectionable to some clients, although the patient’s quality of life does not appear to be diminished.

NSAID Therapy
Cyclooxygenase-2 (COX-2) expression has been documented in 80% of canine nasal carcinomas.11,12 COX-2 expression has also been demonstrated in other carcinomas. In some neoplasms, COX-2 selective inhibition with piroxicam has been shown to have some efficacy for treatment (eg, transitional cell carcinoma).13,14 However, piroxicam therapy for nasal carcinoma is considered controversial, as studies have not demonstrated improved survival with the use of piroxicam alone.3 Recent trials have been undertaken to determine whether other COX-2 inhibitors are effective in the treatment of other types of tumors in which COX-2 expression is increased, such as transitional cell carcinoma of the urinary bladder. For this reason, other COX-2 inhibitors may be effective in the treatment of nasal adenocarcinoma, and at minimum, decrease inflammation and provide palliative analgesia for patients with nasal tumors.

Elisa M. Mazzaferro, MS, DVM, PhD, Diplomate ACVECC, is the director of Emergency Services at Wheat Ridge Veterinary Specialists, in Wheat Ridge, Colorado. She is also the Scientific Program Coordinator for the International Veterinary Emergency and Critical Care Symposium (IVECCS) and the Interactive Laboratory Coordinator for the American Veterinary Medical Association’s (AVMA) annual convention. Dr. Mazzaferro’s clinical interests include trauma, pain management, and metabolic emergencies and she lectures nationally and internationally on these topics and others related to emergency and critical care medicine. She is the co-author of 2 textbooks on the subjects of emergency and critical care, editor of Blackwell’s Five-Minute Veterinary Consult Clinical Companion: Small Animal Emergency and Critical Care, and author of numerous peer-reviewed publications. Dr. Mazzaferro received her DVM from Michigan State University and her PhD from Colorado State University.