Fluffy’s veterinarian is Dr. Jevon Clark, of Kalispell, Montana. He believes that somehow Fluffy got injured or something traumatic happened to her, which caused her to get stuck in the snowbank. Photo Credit: Jevon Clark/The Animal Clinic of Kalispell

A team of veterinarians revived a three-year-old cat named Fluffy who was found nearly frozen to death in a snowbank in Kalispell, Montana. Temperatures had fallen to about 10 degrees, when Fluffy’s owners found her unresponsive and rushed her to the Animal Clinic of Kalispell.

“She was completely packed in about 2 inches of hard-packed snow and ice,” says Dr. Jevon Clark, DVM. “Her skin and extremities were cold.”

Although the normal body temperature of a cat is around 101 degrees, Dr. Clark says that Fluffy’s temperature was so low — “less than 90 degrees” — it didn’t even register on a thermometer when she was first brought in to the clinic. 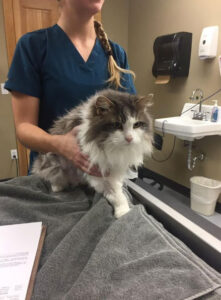 Fluffy had been living outside the house when new owners moved in and adopted her. “She is about three-ish,” says Dr. Clark. Photo Credit: Jevon Clark/The Animal Clinic of Kalispell

“She lives outside so she’s used to [very cold temperatures],” says Dr. Clark. “She had been there at least several hours. We think something traumatic likely happened to her, which caused her to not be physically able to return to her normal hidey holes on their property and get out of the elements. Thankfully, the owners came home from work early that day.”

Initially, Dr. Clark thought her prognosis was “guarded, at best.” But he credits his staff with Fluffy’s amazing recovery.

“It is my amazing staff and associate, Dr. China Corum, who really are responsible for jumping on this case,” says Dr. Clark. “We started with warm water to get the layers of snow and ice off, started IV fluids, then blow dryers and a combination of warming mats and warm towels.” 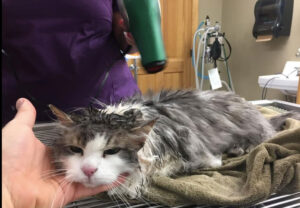 Miraculously, within 30 to 45 minutes, Fluffy began to show signs of life. “She was beginning to at least act a little like a cat — vocalizing and some twitching,” says Dr. Clark. “She was acting like her more normal crabby self.”

But after 2 hours, the team still couldn’t get a temperature that registered. “So we sent her to the local emergency clinic for them to monitor her and keep her on fluids and all of the warming techniques we started,” says Dr. Clark. “She was there about 3 hours before her temp returned to normal and she was actually discharged later that night to the owners.”

The next day, Fluffy returned to the clinic for a checkup, and then again on Feb. 5th for a follow-up visit when “Dr. Corum checked some bloodwork,” says Dr. Clark. “Clinically, she’s completely normal.”

Fluffy’s owners are keeping her indoors for now, “but Fluffy has lived her entire life outdoors,” says Dr. Clark. “I wouldn’t be surprised if she eventually wants to be back out there.”

As for the efforts his staff took to revive Fluffy, Dr. Clark says that “we did exactly what every other practice would do — we’re just blessed that we have amazing clients who brought her in immediately.”

Download a client handout on how to keep small animals safe during extremely cold weather.