Neutrophilic Cholangitis in Cats: Are You Missing Out on an Easy Diagnosis?

GET A DEFINITIVE DIAGNOSIS Hepatopathies such as cholangitis can be difficult to identify; diagnostics include imaging, cytology, histopathology, and various lab tests. Pixel-Shot/shutterstock.com

Inflammatory and infectious hepatobiliary diseases are significant causes of morbidity and, less frequently, mortality in cats.1 Inflammatory hepatobiliary disease is the second most common feline hepatic disease in the United States.2 In 2003, the World Small Animal Veterinary Association (WSAVA) standardization committee proposed a histologic classification scheme in an effort to define discrepancies between the published histologic features of lymphocytic portal hepatitis and chronic lymphocytic cholangitis and establish an international diagnostic terminology for hepatopathies.3,4 This scheme differentiated inflammation of the bile ducts (cholangitis) into 4 categories: neutrophilic, lymphocytic, destructive, and chronic (associated with liver fluke infestation).4 This article focuses on acute neutrophilic cholangitis and chronic neutrophilic cholangitis in cats.

Signalment, clinical signs, minimal database, and imaging can help prioritize inflammatory, infectious, and neoplastic hepatopathies and hepatic lipidosis; however, liver or bile cytology and culture or tissue biopsy are essential to reach a definitive diagnosis.

Neutrophilic cholangitis is more common in cats than in dogs.4 It is subclassified into acute and chronic neutrophilic cholangitis.1 The proposed pathogenesis is secondary to reflux of ascending intestinal bacterial infections.1,5 Histologically, neutrophils are noted within the bile duct lumen, closely associated with the bile duct or between the biliary epithelial cells. If the inflammation extends beyond the limiting plate and into the hepatic parenchyma, the diagnosis is cholangiohepatitis. Progressive disease can result in bile duct rupture with bile leakage, necrosis, and abscesses.4

Prior studies suggested that cats with acute neutrophilic disease were younger and more likely to have a fever, weight loss, and a neutrophilic left shift;3,6,7 however, later research identified overlap in clinical and laboratory findings with acute and chronic disease.1 The most common clinical signs include lethargy, vomiting, weight loss, and decreased appetite. Physical examination abnormalities are not commonly detected but include fever (22% of cases), icterus (34%), and hepatomegaly (21%). Abnormalities on complete blood cell counts are detected in less than half of cats with neutrophilic cholangitis and include leukocytosis (39%), band neutrophils (33%), and anemia (34%). Even in cats with moderate to severe cholangitis, serum liver enzyme activity can be normal.6

Depending on the study, the most consistent abnormality in serum biochemistry panel results is elevation in aspartate transaminase activity (AST; 98% of cats). Variably increased activities of alanine transaminase (ALT; 50% to 57% of cats), alkaline phosphatase (ALP; 14% to 48%), and gamma-glutamyl transferase (GGT) have been noted. The sensitivity of certain serum liver enzymes (ALT, ALP, GGT) appears to be low in cats with cholangitis.6 Many cats are hyperbilirubinemic (66%); however, hepatic synthetic parameters are infrequently abnormal.1,6 Liver function testing using fasting and postprandial serum bile acid concentrations with cutoffs of 15 µmol/L and 20 µmol/L, respectively, had higher specificity than did enzymatic testing and should be considered if hepatic disease is suspected in cats with normal enzyme activities and bilirubin concentration.8

Abnormalities of coagulation parameters, inhibitors of the coagulation system, and fibrinolytic proteins are common in cats with hepatobiliary diseases. Abnormalities include prolongation of prothrombin time (4% to 77% of cases) and partial thromboplastin time (25% to 55%), reduced factor VII (68%) and XIII (31% to 78%, 75% for cats with inflammatory liver disease) activity, and increased PIVKA (protein induced by vitamin K absence; 75%), D-dimer concentrations (83%), and α2-plasmin inhibitor activity (67%).9-11

Hepatobiliary abnormalities are frequently detected during ultrasound examination in cats with neutrophilic cholangitis. They include hyperechoic echogenicity with or without hepatomegaly, bile duct or gallbladder distention, and increased gallbladder sediment (Figures 1 and 2). Other abnormalities frequently noted in cats with neutrophilic cholangitis involve the pancreas (pancreatomegaly, hypoechoic parenchyma, hyperechoic peripancreatic parenchyma) and/or gastrointestinal tract (thickened walls, fluid distention).1 Of note, a retrospective study evaluating multiple hepatobiliary ultrasonographic criteria— including liver parenchymal echogenicity and echotexture, portal venous clarity, gallbladder wall thickness, bile duct diameter, and the character of gallbladder precipitate—was unable to differentiate between a normal liver and diffuse infiltrative liver diseases (hepatic inflammation, cancer, or lipidosis).12 Another retrospective study was also unable to detect statistically significant abnormalities in distinguishing lymphocytic and neutrophilic forms of cholangitis.13 Diagnosis of diffuse liver diseases based on ultrasound findings with or without routine clinical biochemical or hematologic data should be made with caution, even by skilled ultrasonographers.12 Ultrasonography does permit guided percutaneous collection of samples for cytologic or histologic examination. 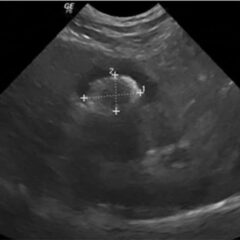 Figure 1. Ultrasound images of feline gallbladder abnormalities. (A) A single, well-defined choleolith is visible in the gallbladder, and the visible bile is echogenic. Cytology in this case revealed bactibilia. 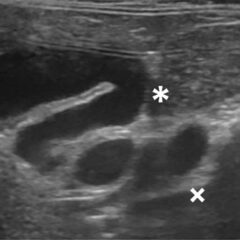 Figure 1. Ultrasound images of feline gallbladder abnormalities. (B) The cystic (*) and common (×) bile ducts are dilated and tortuous. This finding is not pathognomic for cholangitis and can be seen in normal cats. 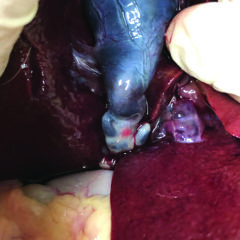 Figure 2. Postmortem image of dilated and tortuous cystic and common bile ducts in a cat.

Fine-needle aspiration (FNA) with cytologic examination has distinct advantages and limitations in evaluating cats with hepatic disorders. It is cost-effective; can be performed expediently and easily, usually without the need for sedation or anesthesia; requires limited preprocedure testing (coagulation is not typically necessary); and provides diagnostic information rapidly compared with liver histopathology.14 Complications are uncommon. With ultrasound guidance, it can be performed with either diffuse or focal disease. Its important limitation is the very small sample size (cells), which does not reflect the morphology of the parenchymal architecture and can fail to correctly identify the primary hepatic disorder.14 In one study evaluating feline hepatopathies, only 51% of cases had an overall agreement between the cytologic and histopathologic diagnoses. Inflammatory disease was correctly diagnosed in 27% of cases.15 This author agrees with others that FNA cytology is a useful diagnostic procedure with many advantages, but a multistep diagnostic approach is preferable, particularly with nonvacuolar diseases16 or equivocal diagnoses, or in cats with a cytologic diagnosis of hepatic lipidosis that does not improve with treatment.

Histopathology of hepatic disorders describes the distribution of abnormalities in hepatobiliary and vascular structures and may be classified as focal, multifocal, zonal, locally extensive, or diffuse panlobular.17 Cholangitis was initially described as a diffuse process; however, similar to pancreatitis,18 it has since been determined to be either diffuse or limited in distribution (focal, multifocal),4 with varying severity of histopathology between liver lobes in cats.1 These findings support the recommendation to obtain biopsy samples from multiple liver lobes to achieve a complete understanding of disease severity.1

The 3 main hepatic biopsy techniques are ultrasound-guided percutaneous needle biopsy, laparoscopic-assisted biopsy, and wedge biopsy via laparotomy. Each technique has advantages and disadvantages. Needle biopsy is a rapid, cost-effective, minimally invasive method of obtaining liver tissue; however, compared to wedge biopsy, this technique has been shown to result in a one-third reduction in the median surface area of the biopsy specimen. This reduction can result in sampling errors, and important pathologic lesions can be overlooked or misjudged.17 The most common adverse reaction observed with needle biopsy is hemorrhage, which is independent of coagulation testing but is more likely if thrombocytopenia (≤80 × 103/µL platelets) or elevated activated partial thromboplastin time is detected. Less frequently, unintended tissues (e.g., large blood vessels, biliary structures, body wall, digestive tract, pancreas, diaphragm, lung) are sampled and pain is noted.17,19-21 Major complications are recognized within 10 hours21 but are typically evident within 0.5 to 1 hour after the procedure.14

The major advantage of laparoscopic-assisted biopsy and wedge biopsy via laparotomy is the larger size of the tissue sample, which more accurately correlates with the underlying pathology.17 Laparoscopic biopsy forceps typically obtain samples approximately 5 mm in diameter (45 mg of liver tissue); surgical sampling provides for a wider range of sample sizes (ideally at least 1 cm and preferably 2 cm deep).14,22

Bacterial culture (aerobic and anaerobic) is an important component of the diagnostic evaluation of feline hepatobiliary diseases. In one study involving cats with hepatobiliary disease, 36% of bile samples and 14% of liver samples had positive bacterial growth.23 A single bacterial species was detected in 83% of cases.23 Bile samples can be obtained by percutaneous ultrasound-guided cholecystocentesis, laparoscopic-assisted cholecystocentesis, or cholecystocentesis at exploratory coeliotomy (Figure 3).24 Uncommon complications of these procedures include gallbladder rupture and bile peritonitis.3,24 Bile cytology in cats with neutrophilic cholangitis can reveal neutrophilic inflammation. Escherichia coli, either alone or in combination with obligate or facultative anaerobes, is the most commonly reported organism in bile cultures.3 Other reported organisms include Enterobacteriaceae (Salmonella enterica, Klebsiella, Enterobacter) and Streptococcus, Enterococcus, Actinomyces, Acinetobacter, Pasteurella, Clostridia and Bacteroides species.3 Bacteria are isolated by aerobic or anaerobic culture in a few cases of neutrophilic cholangitis/cholangiohepatitis;25 however, newer tests, including fluorescent in situ hybridization, may be more sensitive in detecting bacterial infections.5 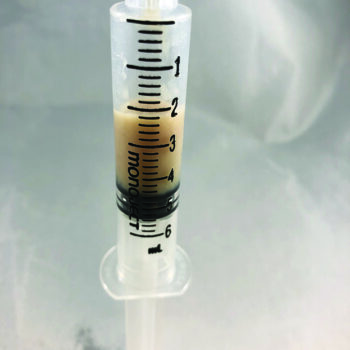 Figure 3. Bactibilia in a cat. (A) A 6-mL syringe containing infected bile obtained by ultrasound-guided cholecystocentesis. The bile is not the normal dark green color and is thick in consistency. 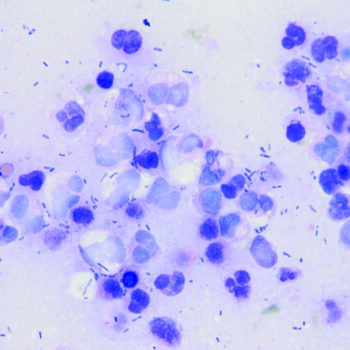 Figure 3. Bactibilia in a cat. (B) High-magnification cytology image of the bile in (A) revealing marked neutrophilic inflammation with myriad intracellular and extracellular bacteria. Aerobic culture revealed growth of Escherichia coli.

Ascending infection with enteric bacteria is the most likely source of hepatobiliary infections; however, hematogenous seeding is possible.3,5 The unique dual entry of the common bile and pancreatic ducts at the major duodenal papilla in the duodenum may lead to the increased risk of reflex of enteric contents and/or pancreatic secretions.3 The association of pancreatitis and cholangitis is theorized to be associated with the shared opening of the pancreatic and common bile ducts in the cat.1

The primary specific therapy for neutrophilic cholangitis/cholangiohepatitis is antibiotics (Table 1),26 ideally directed by bacterial culture and sensitivity testing. Often, antibiotics must be chosen presumptively pending culture results. Antibiotics should be active against aerobic and enteric bacteria and excreted in the bile in an active form. Commonly used antibiotics include ampicillin, amoxicillin–clavulanate potassium, ampicillin–sulbactam, ticarcillin disodium–clavulanate potassium, and metronidazole. Based on their potential side effects, less frequently used antibiotics include chloramphenicol, tetracycline, and erythromycin. Therapy for 2 months has been suggested.25 The optimal duration of treatment has not been determined with prospective trials. 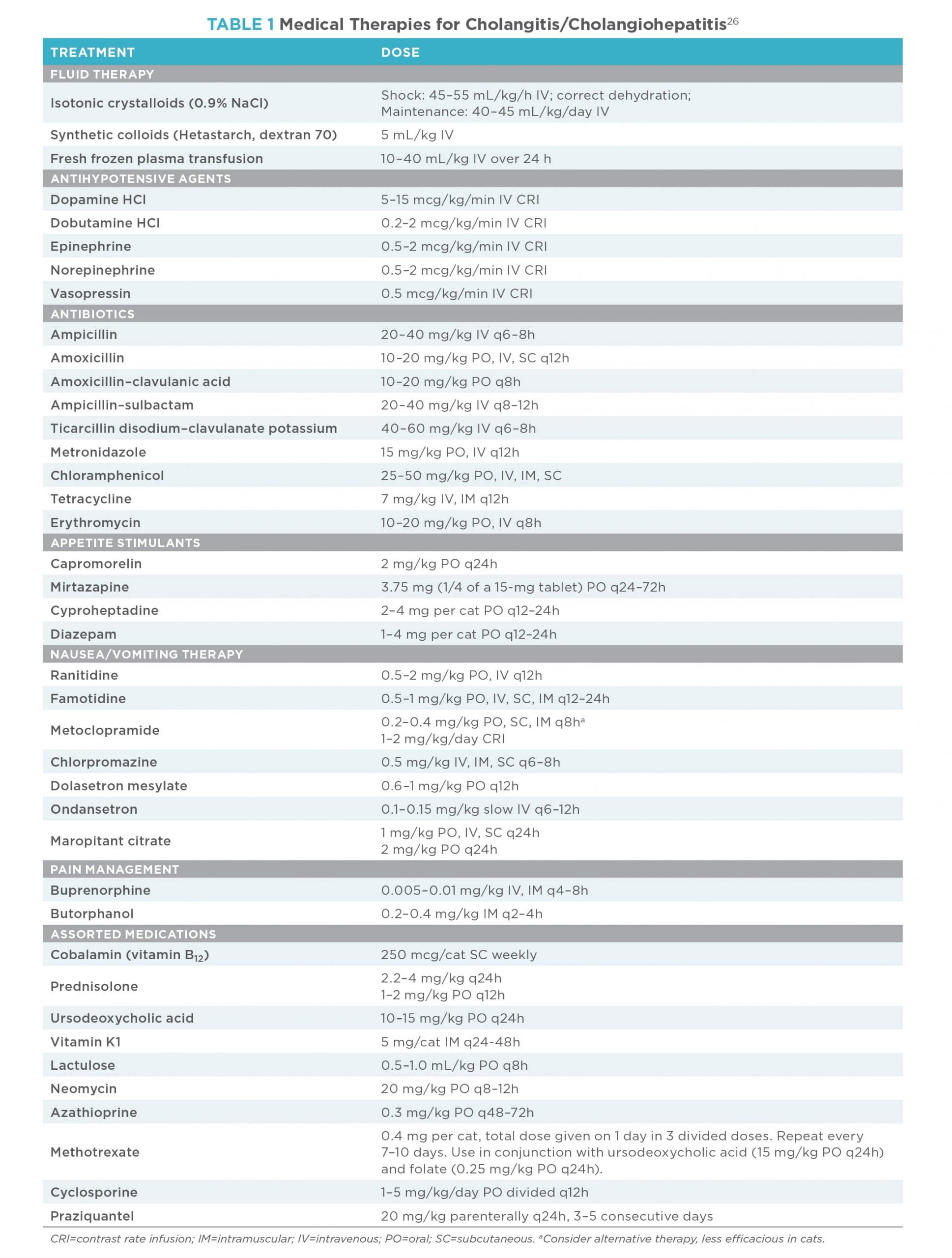 Nonspecific therapies are important since some cats with neutrophilic cholangitis/cholangiohepatitis are critically ill. Treatment for dehydration and correction of electrolyte derangements, coagulopathies, and/or hypotension may be needed. Appetite stimulants may be beneficial for low-grade inappetence; however, with persistent inappetence, placement of an enteral feeding tube (esophagostomy or gastric tube) should be considered. Protein restriction is only required in cats with hepatic encephalopathy; otherwise, a highly digestible, moderate-fat diet is often chosen.27 Hepatic encephalopathy appears to be less common in cats with acquired liver disease; if present, it can be treated with lactulose or oral antibiotics.

Other nonspecific treatments include controlling nausea and/or vomiting, reducing gastric acid, and, less commonly, alleviating pain (more commonly detected with pancreatitis). If complete biliary obstruction is present, and in some cases of choleoliths, surgical intervention is recommended. Previously, biliary-to-intestinal diversion (i.e., cholecystoduodenostomy or cholecystojejunostomy) was recommended in cases of complete extrahepatic bile duct obstruction. Due to high postsurgical morbidity,28 alternative techniques have been proposed, including choledochal stenting;29 however, compared with dogs, cats may have greater morbidity with choledochal stenting.29 Ursodeoxycholic acid is often used for its anti-inflammatory, immunomodulatory, and antifibrotic properties. Ursodeoxycholic acid increases the fluidity of biliary secretions, but the benefits of its use should be weighed against its risks in cats at risk for a biliary obstruction or choleoliths.

Protein restriction is only required in cats with hepatic encephalopathy; otherwise, a highly digestible, moderate-fat diet is often chosen.27

The prognosis in cats with acute cholangitis appears good, with median survival times greater than 1 year.3,6 Poor outcomes are most likely related to concurrent diseases6 such as pancreatitis, inflammatory bowel disease, and, to a lesser degree, nephritis.30,31