Key Findings From The State Of Pet Health 2014 Report 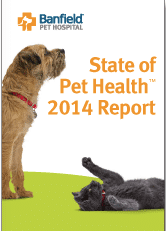 Each year, Banfield Pet Hospital (banfield.com) collects and analyzes medical data from more than 850 hospitals across the U.S., in which more than 14,000 associates, including 2900 licensed veterinarians, care for nearly 2.3 million dogs and 470,000 cats. The findings from each year’s data are then shared with the public through the State of Pet Health Report (stateofpethealth.com) published the following year.

The 5 Ws of Data Collection

WHO The Banfield Applied Research and Knowledge (BARK) team of investigators—dedicated to population-based research, which supports the practice of evidence-based medicine

WHERE At Banfield’s main campus in Portland, Oregon

WHY To fulfill Banfield’s commitment to:

The 2014 report—the fourth year the State of Pet Health Report has been compiled—focused on infectious diseases that:

The data analyzed included disease prevalence as well as geographic trends. The infectious diseases studied were:

In this year’s report, the most concerning statistics revealed were a:

These increases occurred over the past 5 years (since 2009).

It is important to note, though, that the infectious diseases highlighted in the report are just a subset of those affecting the pet population. These nfectious diseases—for which meaningful statistics could not be calculated—are also touched on in the 2014 report.

Canine infectious respiratory disease complex results from exposure to a variety of bacterial and viral pathogens. These pathogens include:

In both dogs and cats, multiple pathogens are usually present in respiratory diseases. In addition, patient immune status and management variables can contribute to disease severity.

DIAGNOSES BASED ON SPECIES & AGE

The Table outlines the most common dog and cat breeds presented to Banfield Pet Hospitals in 2013.

Most Common Diagnoses in Dogs

Most Common Diagnoses in Cats

For every 5 dogs presented in 2013, 1 cat was presented for care. The bar graph, Most Common Diagnoses: Cats, provides a comprehensive look at the most common diagnoses—by age category—in cats presented for veterinary care at Banfield Pet Hospitals.

Wellness visits, including such as care as physical examination, routine vaccination, and laboratory analysis, are included in the bar graphs under the heading “Healthy Pet.” While not a true medical diagnosis, including this reason for presentation to a veterinarian reinforces the importance of preventive care.

The State of Pet Health 2014 Report highlighted the following key findings regarding infectious diseases in cats presented to Banfield Pet Hospitals in 2013.

The State of Pet Health 2014 Report highlighted the following key findings regarding infectious diseases in dogs presented to Banfield Pet Hospitals in 2013.

Key Takeaway: The prevalence of parvovirus infection in dogs has remained fairly stable over the past 5 years; however, despite the availability of effective vaccines, the disease persists. 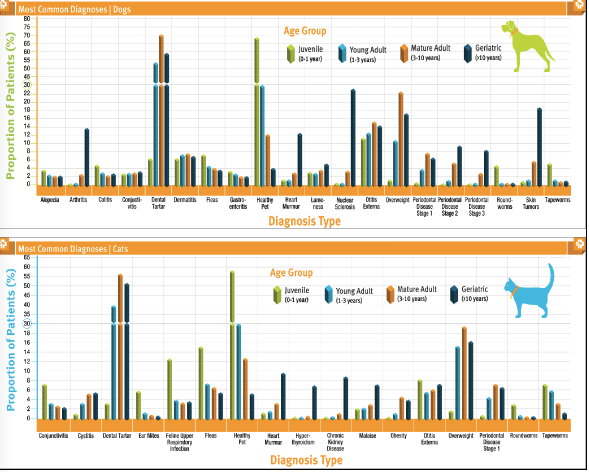 These diagnoses are a compilation of the most common diagnoses found in dogs and cats throughout the year. While “Healthy Pet” is not a true medical diagnosis, it is important to include, as it reinforces that pet owners should bring their pets to the veterinarian for preventive care, as well as when their pets are sick or injured. Reasons for a “Healthy Pet” visit include physical examinations, routine vaccinations and blood work or nutritional counseling, among others.

Key Takeaway: The prevalence of CIRDC in dogs has fluctuated over the past 5 years, but the overall difference is minimal (2% decrease). Despite the availability of vaccines, this highly contagious disease remains a significant threat to pet health.

Key Takeaway: Diagnosis of infection with Borrelia burgdorferi has increased by 21% since 2009—from 53 cases per 10,000 to 64 cases per 10,000 in 2013. The change corresponds to a similar increase in tick infestation over the same period.

More dogs were diagnosed with Lyme disease in the spring and early summer than at any other time of the year. This peak corresponded with the 2013 peak in tick infestation seen in dogs, demonstrating a link between number of ticks and spread of Lyme disease.

The State of Pet Health 2014 Report emphasizes that the threat of infectious disease is often closer to home than pet owners realize—hiding in backyards and neighborhood dog parks. Seemingly innocent and regular activities for pets, such as drinking from, or swimming in, a pond, sharing a toy, or chasing wildlife may result in serious illness if a pet is not properly vaccinated and protected with preventive medications.

The veterinary professional plays an important role in preventing the spread of infectious disease by: