Dr. Sung has a passion for helping owners prevent or effectively manage behavior problems in companion animals, enabling clients and patients to maintain a high quality of life. Dr. Sung obtained her master’s degree, doctorate in psychology and doctorate in veterinary medicine from the University of Georgia. She is a frequent contributor to HealthyPet magazine and the websites PetCoach, PetMD, and GreatPetCare. Dr. Sung currently practices veterinary behavioral medicine in the Behavior Specialty Clinic located at the San Francisco SPCA Mission Hospital.

Dr. Landsberg is a 1976 graduate of the Ontario Veterinary College. He is currently Vice President of Veterinary Affairs at CanCog Incorporated, head of Fear Free research, and a Fear Free practice certification veterinarian for Canada. Dr. Landsberg has authored numerous behavior research papers, chapters, and books, including Behavior Problems of the Dog and Cat and Canine and Feline Dementia. Dr. Landsberg has received awards for service to the profession from the American Animal Hospital Association and Western Veterinary Conference.

In 2016, 38% of U.S. households owned a dog.1 Given this large population of pets, many of whom are aging, practitioners are being presented with more opportunities to examine and assess senior canine patients. Many owners believe it is normal for pets to “slow down” as they age and therefore seldom report mild changes in behavior.2 Yet any change in behavior could be a sign of cognitive dysfunction syndrome (CDS) or of an underlying medical condition. Therefore, veterinarians must be proactive in screening and counseling owners on the importance of reporting behavioral signs.

How Common Is CDS?

In a 2001 survey of 180 neutered dogs aged between 11 and 16 years, owners reported cognitive impairment in one or more behavioral categories in 28% of the youngest dogs (age 11 to 12 years) and impairment in 2 or more categories in 10% of the same group.3 Of dogs aged 15 or 16 years, 68% were impaired in one or more behavioral categories and 35% in 2 or more categories. A 2010 study using an online validated cognitive questionnaire found a prevalence of CDS of 14.2%. Only 1.9% of these dogs had been diagnosed by their veterinarian.4 Size and breed were not indicative for developing CDS;4 however, the older the pet, the higher probability of having more severe signs.

What Are the Signs of CDS?

Dogs with CDS show deficits in memory, learning, spatial awareness, perception, social interactions, and sleeping patterns. The acronym DISHAA can be used to aid in screening and diagnosis of clinical signs:

When a patient exhibits any change in behavior, a diagnostic workup is needed to first rule out any medical causes. In one study, 28% of 300 dogs with signs of CDS were found to have a medical problem that may have caused or contributed to the signs.2 For example, dogs with hyperadrenocorticism may exhibit signs similar to those of CDS, such as increased anxiety and loss of housetraining. Dogs with intracranial diseases may exhibit behavioral changes, such as disorientation or changes in interactions with family members.

Pathologic changes in the brain associated with aging include ventricular dilation, decreased frontal and temporal lobe volume, compromised cerebrovascular circulation, neuronal loss, a decline in cholinergic brain function, an increase in toxic free radicals, and deposition of beta-amyloid and hyperphosphorylated tau, all of which might be correlated with a decline in cognitive function.5-9

How Does Aging Affect Nutrition?

Atrophic gastritis in elderly people has been theorized to interfere with absorption of vitamin B12 and folic acid. It is unclear if a similar process occurs in dogs. In people, supplementation with B vitamins can be helpful. Elderly people with low levels of vitamin B showed improved cognitive function when given a vitamin B supplement.10 Vitamin B12 is needed in the process of forming methionine, which undergoes methylation to form S-adenosyl methionine (SAMe). When the formation of SAMe is limited, the production of phosphatidylcholine, myelin, melatonin, and catecholamines, as well as DNA and RNA synthesis, is also affected. SAMe helps maintain cell membrane fluidity and receptor function, decrease the turnover of monoamine transmitters, and increase the production of the endogenous antioxidant. Another B vitamin, pyridoxine (vitamin B6), is also important for normal brain development, function, and neuronal health and is a cofactor in the synthesis of several neurotransmitters, such as serotonin, noradrenaline, and dopamine.10

The Use of Diet to Treat CDS

Studies in both laboratory models and clinical trials have demonstrated a beneficial effect of nutrition on improving clinical signs of CDS and slowing the progression of cognitive dysfunction in dogs. The use of combined ingredients (TABLE 1) to combat oxidative and free radical changes may have a synergistic effect to reduce cognitive decline.16 In one study, dogs fed high-quality commercial diets designed for age, size, or health were 2.8 times less likely to develop CDS than dogs fed low-quality commercial food or table scraps.17 The diets discussed below are commercially available and supported by evidence of clinical effect. 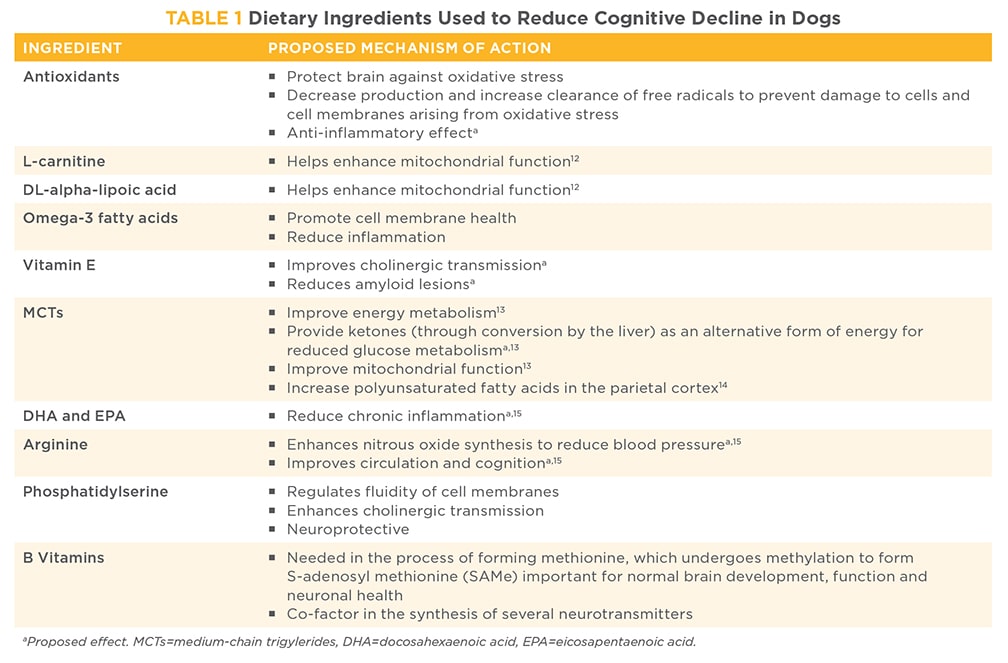 A diet supplemented with antioxidants, vitamins E and C, beta carotene, ascorbic acid, selenium, flavonoids and carotenoids, mitochondrial cofactors DL-alpha-lipoic acid and L-carnitine, and omega-3 fatty acids has been developed for dogs with CDS (Hill’s Prescription Diet b/d Canine; hillspet.com). A 2-year study demonstrated a decrease in the rate of cognitive decline with the use of this diet, with the greatest effect seen when combined with behavioral enrichment.17

Studies have demonstrated a reduction in cerebral glucose metabolism in dogs as young as 6 years, which may contribute to brain energy deprivation, decreased neuronal function, and cognitive decline.11 Ketone bodies are the principal alternative source of energy for the brain. Medium-chain triglycerides (MCTs) are converted by the liver to the ketone body beta-hyroxybutyrate for improved energy metabolism and mitochondrial function in the aging brain.16  MCTs may increase the amount of polyunsaturated fatty acids in the parietal cortex of senior dogs.17 In one study, dogs fed a diet supplemented with MCT performed better on cognitive tasks compared with controls.18

A diet supplemented with a “brain protection blend” of ingredients—including B vitamins, antioxidants (vitamins E and C), selenium, DHA, eicosapentaenoic acid, and arginine (Purina Neurocare; purina.com/purina-pro-plan-veterinary-diets)—has also been demonstrated to improve cognitive function compared with a control diet in a laboratory trial in beagles. In a 3-month clinical trial, client-owned dogs aged 9 to 16 years that had been diagnosed with signs of CDS were fed a diet containing 6.5% MCT in combination with this ingredient blend. These dogs had significant improvement in all 6 categories of DISHAA compared with a control group, in which 4 of 6 categories improved.19 An over-the-counter product (Purina Bright Mind; purina.com/pro-plan/dogs/bright-mind-dog-food) is also formulated with the “brain protection blend” and 5.5% MCT.

The Use of Nutritional Supplements to Treat CDS

Nutritional supplements may also be used to improve signs and slow decline of CDS. A commercial supplement (Senilife; Ceva Animal Health, senilife.com) containing phosphatidylserine, pyridoxine, Gingko biloba, and vitamin E was shown in one small laboratory crossover trial of 9 dogs, and in an open-label trial of 8 dogs with CDS, to improve short-term memory and clinical signs associated with CDS.20 Phosphatidylserine is a phospholipid needed to maintain cell membrane health. It may facilitate neuronal processes and stimulate acetylcholine release and neurotrophic growth. G. biloba improves cerebral blood flow, increases glucose metabolism, has an antioxidative effect, and may be protective against beta-amyloid damage. A supplement containing phosphatidylserine and omega-3 fatty acids, vitamin C, L-carnitine, alpha-lipoic acid, coenzyme Q, and selenium (Activait; Vet Plus, vetplusglobal.com) has also demonstrated efficacy in improving clinical signs of CDS, including disorientation and sleep, in a placebo-controlled trial of 44 dogs.21

Another supplement marketed for treatment of CDS, SAMe tosylate disulfate, has been shown to improve cognitive function. In a placebo-controlled clinical trial, 36 dogs with CDS that received the SAMe supplement had increased activity and interactivity with their owners.22 Supplementation with SAMe may improve attention and executive function. SAMe also increases central serotonin levels, which may be reduced in senior dogs. Therefore, SAMe should be used cautiously with drugs that increase serotonin levels.

Nutritional supplementation complements the use of medication, behavioral enrichment, and environmental management to treat CDS. Some single-ingredient products may be effective; however, the additive or synergistic effects of ingredients in diets or supplements may provide the most benefit to reduce cognitive decline in canine patients.

Compliance Strategies for the Obese Patient