Nutritional therapy as an adjunct to antiepileptic drugs in the management of canine drug-resistant epilepsy holds promise, but additional trials involving larger study populations are needed.

Dr. Muñana earned her BS from the University of California at Berkeley and her DVM from the University of California at Davis. She completed a small animal rotating internship at Kansas State University and a neurology/neurosurgery residency training program at Colorado State University. She then joined the faculty at North Carolina State University College of Veterinary Medicine, where she is currently a professor of neurology. Dr. Muñana’s research interest is canine epilepsy, with a focus on the use of clinical trials to evaluate the effectiveness of novel antiseizure therapies and better understand factors that influence treatment response.

Epilepsy is the most common chronic neurologic disorder encountered in small animal practice1 and is estimated to affect up to 0.75% of dogs in the general population.2,3 Idiopathic epilepsy, a clinical syndrome characterized by recurrent seizures for which there is no underlying cause other than a presumed genetic predisposition, is diagnosed in most affected dogs.4,5 Antiepileptic drugs (AEDs) are the cornerstone of therapy for idiopathic epilepsy, and treatment is often lifelong.

Up to 30% of dogs with idiopathic epilepsy are classified as drug resistant;6 that is, they fail to achieve satisfactory seizure control after adequate trials of 2 or more tolerated and appropriately chosen and administered AEDs. Drug resistance poses a serious challenge in the management of epilepsy, as poor seizure control is associated with increased morbidity and fatality7,8 and can place a considerable financial and emotional burden on caregivers.7,9 Furthermore, medication-related adverse effects are common in dogs with epilepsy (more than 80% of dogs), and these effects are associated with a worsening of quality of life.9

The importance of nutrition in optimizing AED therapy is established.10,11 More recently, evidence has emerged to suggest that dietary therapy may have a beneficial effect on seizure control as well.12,13 Efforts to develop treatment protocols that include the use of nutritional approaches to improve seizure control while minimizing adverse effects of treatment are ongoing.

In a recent survey of owners of dogs with idiopathic epilepsy, two-thirds reported changing their dog’s diet since the diagnosis of epilepsy, and nearly half administered a dietary supplement to help manage their dog’s epilepsy, with the goal of either reducing the frequency or severity of seizures or offering protection from potential AED-related adverse effects.14 However, less than 20% of owners consulted their veterinarian on the use of supplements; rather, most advice was obtained from online sources.14 Hence, it is important for veterinary practitioners to understand the scientific basis for proposed nutritional strategies in the management of canine epilepsy to be able to best assist and educate their clients.

Dietary factors can influence the disposition of AEDs in the body, thereby affecting efficacy. For example, bromide is excreted in the urine, competing with chloride for renal tubular reabsorption, such that alterations in chloride intake can affect serum bromide concentrations.10 A high-chloride diet leads to an increase in bromide excretion and lower serum concentration, while a low-chloride diet has the opposite effect. To avoid fluctuations in serum bromide concentrations, dogs’ daily diet, including treats, should be kept consistent. Phenobarbital metabolism can also be affected by diet; a pharmacokinetic study in healthy dogs demonstrated that dietary restriction of protein or fat can significantly increase this drug’s clearance.10

Owners should be advised of these interactions, and any necessary dietary change should be performed gradually and under the supervision of a veterinarian, with serum AED concentrations monitored during the transition.

Dietary Therapy as an Adjunctive Treatment for Epilepsy

Further details of the studies discussed below are summarized in TABLE 1. All but one of the studies were randomized controlled trials, which provide the highest quality of evidence when assessing a novel treatment. However, because all of the available data come from a small number of studies involving relatively low numbers of dogs, the strength of any conclusions that can be made regarding the efficacy of these therapies is limited. 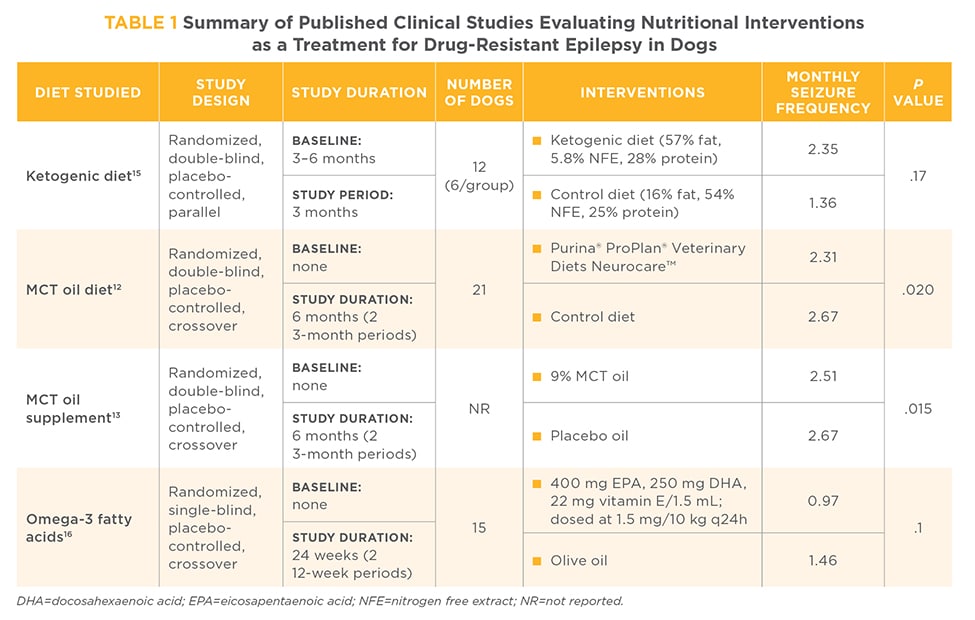 In humans, the ketogenic diet is an efficacious, alternative therapy for drug-resistant epilepsy. This high-fat, low-carbohydrate diet is designed to mimic the biochemical changes of fasting, which has long been recognized to influence seizure control. Its proposed anticonvulsant mechanisms include altered neuronal excitability via enhanced mitochondrial energy metabolism, changes in synaptic function, and inhibition of glutaminergic neurotransmission.17 One study has evaluated a high-fat, low-carbohydrate diet as a treatment for dogs with drug-resistant epilepsy. No statistically significant difference in seizure frequency between the treatment and control groups was identified, but dogs fed the ketogenic diet did not achieve a level of ketosis associated with seizure control in humans.15

Modifications to the ketogenic diet have been introduced for humans, primarily to improve palatability and compliance. The medium-chain triglyceride (MCT) diet substitutes medium-chain fatty acids for a portion of the long-chain fatty acids in the classic ketogenic diet. This modification is based on the premise that MCTs are efficiently absorbed from the gastrointestinal tract and are more ketogenic than long-chain triglycerides, thereby allowing more carbohydrate in the diet without compromising the ketogenic basis.18

A study designed to evaluate a diet enhanced with MCTs as a treatment for drug-resistant idiopathic epilepsy in dogs identified a significant reduction in seizure frequency and seizure day frequency in dogs fed the test diet compared with the control diet.12 These results were corroborated in a subsequent study comparing a 9% MCT dietary supplement to placebo oil as an adjunctive treatment in epileptic dogs with poorly controlled seizures, in which seizure frequency and seizure day frequency were significantly lower in dogs receiving the MCT supplement compared with control.13

Omega-3 fatty acid supplementation has also been proposed as a treatment for epilepsy, as both eicosapentanoic acid (EPA) and docosahexaenoic acid (DHA) can reduce neuronal excitability by modulating ionic channels and have been shown to have an anticonvulsant effect in rodent models.19 A study evaluating omega-3 fatty acid supplementation as a treatment for dogs with drug-resistant idiopathic epilepsy failed to identify a difference in seizure frequency or severity compared with placebo.16

The use of hypoallergenic diets as a treatment for epilepsy in dogs was described in a retrospective study that has only been published in abstract form.20 Seven of 8 dogs were reported to experience a reduction in the frequency and severity of seizures with the introduction of an exclusion diet.

The role of nutrition in the management of epilepsy in dogs continues to evolve. It is recommended that any dietary alterations be made gradually and under the supervision of a veterinarian to avoid potential changes in AED disposition. Nutritional therapy as an adjunct to AEDs in the management of drug-resistant epilepsy holds promise, particularly the use of MCTs; however, there is currently insufficient evidence to support a strong recommendation for its use. Additional trials involving larger study populations are warranted to further discern the role of diet and nutritional supplements in the treatment of epilepsy in dogs.