Acute vision loss in the dog is generally considered an emergency and warrants prompt evaluation by a veterinarian to confirm vision loss, localize the causative lesion, and institute therapy.

Vision loss can occur gradually or manifest acutely in dogs, but acute and complete blindness can be particularly devastating. The abrupt nature of this blindness is very disconcerting for all involved and pet owners may make hasty conclusions and decisions.

The diagnostic approach to these patients should include:

An Eye Toward Anxiety

When a dog is presented for acute blindness, or what is perceived as acute blindness, it is important to proceed with patience and care because the patient is likely anxious and upset, while its owner is often distraught. Slow movements, accompanied by a calm voice, facilitate the examination, may soothe or allay some anxiety, and make the clinician’s presence known to the dog at all times.

A thorough general and ophthalmic history is crucially important to the investigation of blindness because differential diagnoses can be quite different depending upon the onset and duration of the deficits.

The history should determine:

As the history is being gathered, confirmation of vision—or the lack thereof—should be performed. Note that some patients—those with neurologic disease and aged animals with cognitive dysfunction—may behave as if they are visually impaired even though their visual systems are functional.

Vision requires functioning central and peripheral ophthalmic systems, and may be roughly assessed with a menace response. The menace response test is performed by making a menacing gesture with the hand toward the patient’s eye. Take care not to touch the vibrissae or cause excessive air currents, both of which stimulate the sensation of touch rather than sight, potentially inducing a false-positive result.2 If the animal can see, it should blink or move its head away from the stimulus.

The patient’s vision can be further evaluated by noting its response to cotton balls (or some such noiseless, scentless object) tossed into the visual field or observing the visual placing reaction.

Visual placing is assessed most easily in small patients that are able to be held. For this test, the patient is held in the examiner’s arms so that the forelimbs dangle freely. The dog is moved slowly toward a table or other elevated flat surface. As the limbs approach the edge of the table/flat surface, if visual and able to respond, the dog will raise its limbs in order to step onto the table.2 If the dog does not see the table, it will not raise its limbs, allowing them to bump into the edge.

In patients with suspected blindness, an obstacle course or “maze test” may be used to determine whether vision is present.

Traffic cones, foam cylinders, or even examination room furniture, such as chairs and waste cans, suffice, although elaborate mazes may be constructed for standardized testing. The dog should be placed at the opposite end of the maze from its human companion, who is asked to call the dog’s name only once, which keeps the dog from following voice cues in order to maneuver.

Vision should be evaluated in normal light and then dim light (after dark adaption) and obstacles should be adjusted between tests to avoid memorization and mapping. To assess night vision, dim the ambient illumination until you can barely distinguish the room furniture and maze course obstacles. Normally sighted dogs have better developed night vision than humans; therefore, the patient should be able to see the maze obstacles better than the examiner.3

For the menace response, cotton ball test, and visual placing reaction, each eye should be evaluated separately by covering each in turn and testing the exposed eye.

is the adjustment of the eye to low light intensities, involving reflex dilation of the pupil and activation of the rod cells in preference to the cone cells.

The size of the pupils and the direct and consensual (response in the fellow, non-stimulated eye) pupillary light reflexes (PLRs) are very important for lesion localization (Figure 1).2 These assessments should be performed with a bright light in a dimly lit room. 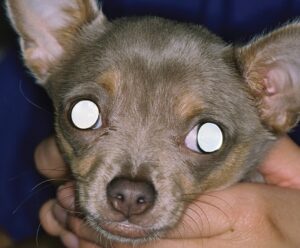 FIGURE 1. Complete resting mydriasis in a young Chihuahua with bilateral optic neuritis. Both direct and consensual PLRs were absent.

The consensual pupillary reflex is normally equal to the direct.

The PLRs require integrity of retinal neural cells, optic nerves, optic chiasm, optic tracts, midbrain (Edinger-Westphal nucleus), and parasympathetic fibers via the oculomotor nerve, ciliary ganglia, and the iridal sphincter musculature, but integrity of the cerebral cortex is not required (Figure 2). The reflex is, therefore, subcortical and should be considered an evaluation of the integrity of the retina and optic tracts, not of vision.2 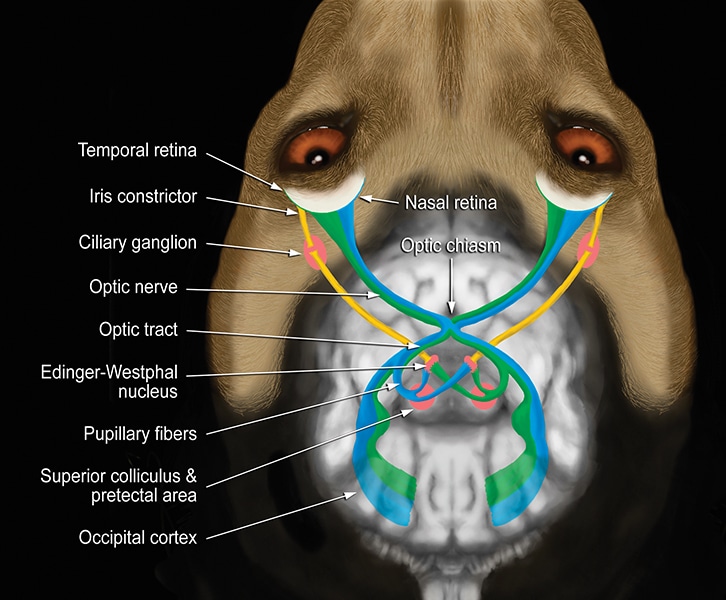 FIGURE 2. The pathway of the pupillary light reflex.

In general, in dogs with vision impairment, when PLRs are (Table 1): 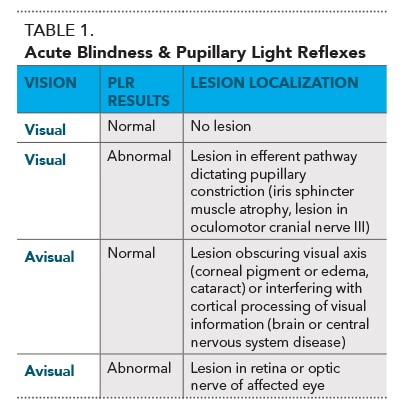 Examination of the Eye

Because the eye can often be visualized to the level of the posterior segment (in its normal state), a complete ophthalmic examination can provide a rapid and accurate diagnosis for many ophthalmic diseases (Table 2). 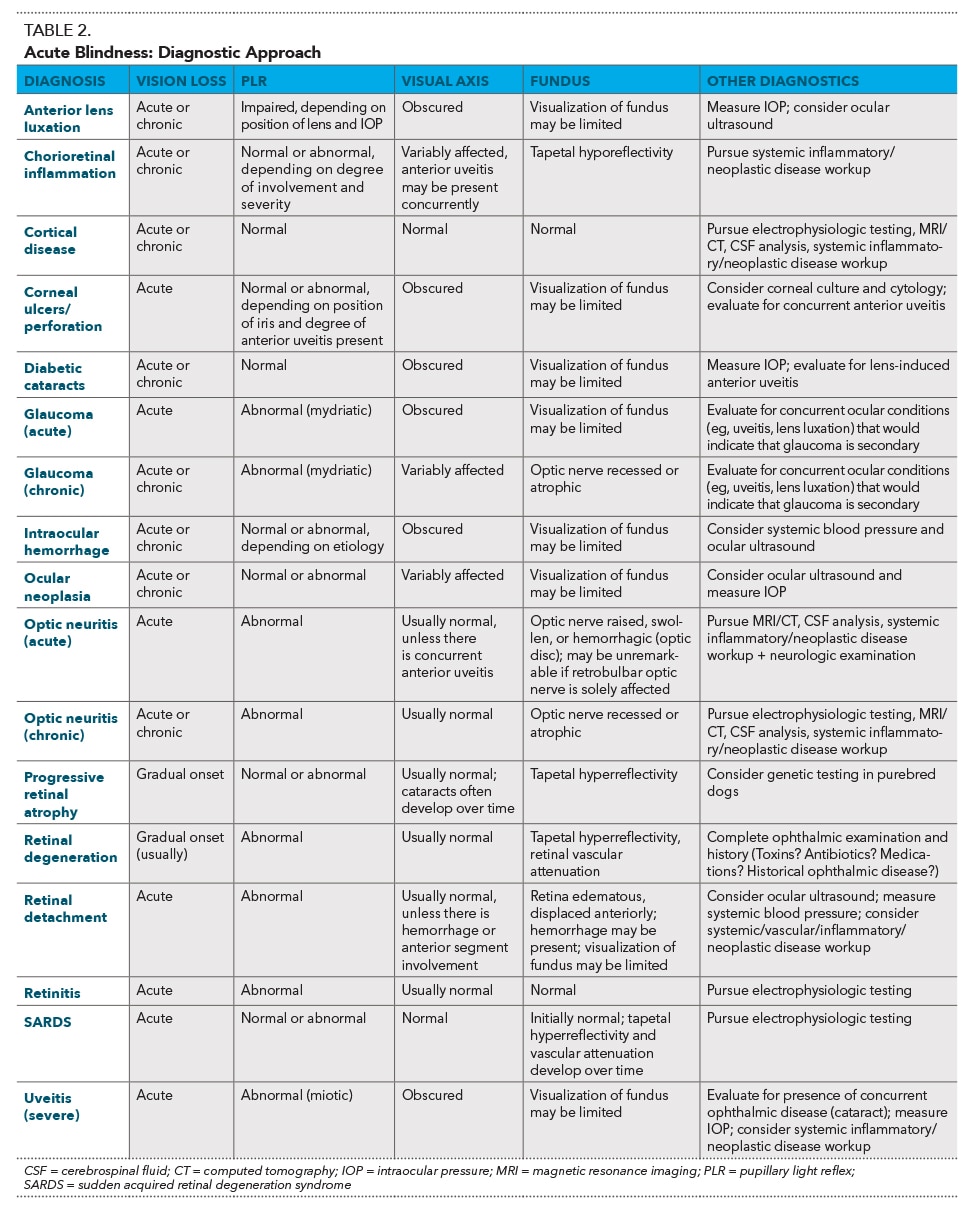 During the ophthalmic examination, keep in mind the general causes of vision loss:

Lesions obscuring the visual axis are often relatively easy to diagnose and may develop slowly or rapidly. Table 3, provides a list of ocular lesions that may present as an acute onset of vision loss. 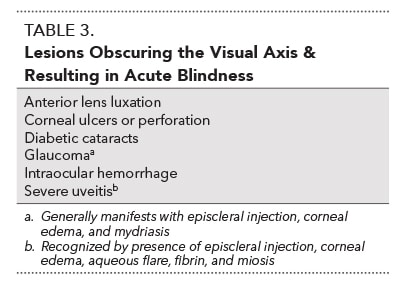 Because vision can potentially be restored with appropriate management, rapidly developing cataracts, corneal ulcers, severe uveitis, intraocular hemorrhage, and anterior lens luxation should be considered urgent or emergent depending on severity. Acute glaucoma should always be considered an emergency.

A thorough fundic examination is the next step if the:

Often, if the retina or optic nerve is affected, the pupil is dilated, making pharmacologic mydriasis unnecessary.

The optic nerve should be thoroughly examined for evidence of disease or inflammation.

If the optic nerve is raised, swollen, or hemorrhagic, optic neuritis is a likely diagnosis. A variety of infectious or inflammatory diseases and neoplastic processes may result in optic neuritis, which usually manifests with an acute onset of marked vision loss. Once diagnosed, neurologic evaluation should be pursued as other neurologic deficits often are present concurrently.

Conversely, if the optic nerve is recessed or atrophic, the changes present are chronic. This condition can occur due to damage from chronic glaucoma, retinal degeneration, or chronic optic neuritis. Optic nerve disease carries a guarded to poor prognosis for vision return.

Examination of the retina should include both the tapetal and non-tapetal regions and the retinal vasculature. The appearance of the tapetal fundus should be carefully evaluated, particularly its reflectivity.

Dogs with PRA generally lose night vision first, followed by decreasing day vision and then complete blindness. In both advanced PRA and SARDS, vascular attenuation and diffuse tapetal hypereflectivity develop; a dog with SARDS, though, has a normal fundus initially and becomes acutely blind. Physical evidence of retinal degeneration (tapetal hyperreflectivity and vascular attenuation) develops over time in SARDS patients.

Tapetal hyporeflectivity (dull tapetal appearance) is seen with chorioretinal inflammation. Since much of the retina must be inflamed for obvious vision loss to be present, diagnosis is often easily made by fundus examination.

Keep in Mind During PLR

Remember, PLRs are affected by the psychological state of the animal, room illumination, age, many topical and systemic drugs, and the intensity of the light stimulus.

If an animal is highly nervous or frightened, the pupils may be dilated and respond poorly to low-intensity light. However, with acclimation or a strong light source, this effect is minimized.

Older animals may exhibit slow and incomplete PLRs resulting from atrophy of the iris sphincter muscle. This response is common in small dogs, especially poodles. The pupil margin may have an irregular or scalloped appearance or an irregular pupil shape, referred to as dyscoria (Figure 3). 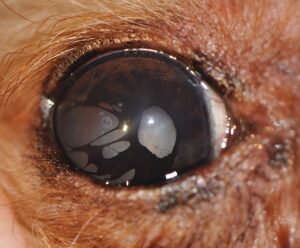 FIGURE 3. Iris atrophy in a Yorkshire terrier has resulted in mydriasis and an incomplete pupillary light reflex. Note the scalloping of the pupil margin and the holes in the temporal iris stroma. This aged individual also has an immature cataract.

If the fundus cannot be visualized due to vitreal hemorrhage or inflammation, an ocular ultrasound should be performed to assess for conditions that result in ocular hemorrhage: retinal detachment and ocular neoplasia.

If retinal detachment is identified—either by fundus examination or by ultrasound—or if posterior segment hemorrhage is present, systemic blood pressure should be measured. As a result of increased hydrostatic pressure in the vasculature, systemic hypertension can cause fluid accumulation in the subretinal space, which displaces the retina into the vitreal chamber, resulting in retinal detachment.1,4

If the fundus appears normal and the animal is avisual, especially if vision loss was acute, consider the following retinal conditions:

These conditions can usually be differentiated with PLRs and electrophysiologic testing. Abnormal PLRs are typically associated with retinal or optic nerve disease and normal PLRs with cerebral cortical disease.

Animals with cortical or optic nerve blindness should be evaluated with:

In addition, a normal ophthalmic examination should prompt consideration of the central nervous system as the primary site of disease, especially when the PLRs are normal.

Acute vision loss in the dog is generally considered an emergency and warrants prompt evaluation by a veterinarian to confirm vision loss, localize the causative lesion, and institute therapy. In some cases, prompt medical treatment will result in return of vision. Delayed care carries a poor prognosis for sight and may delay diagnosis of a significant systemic condition.