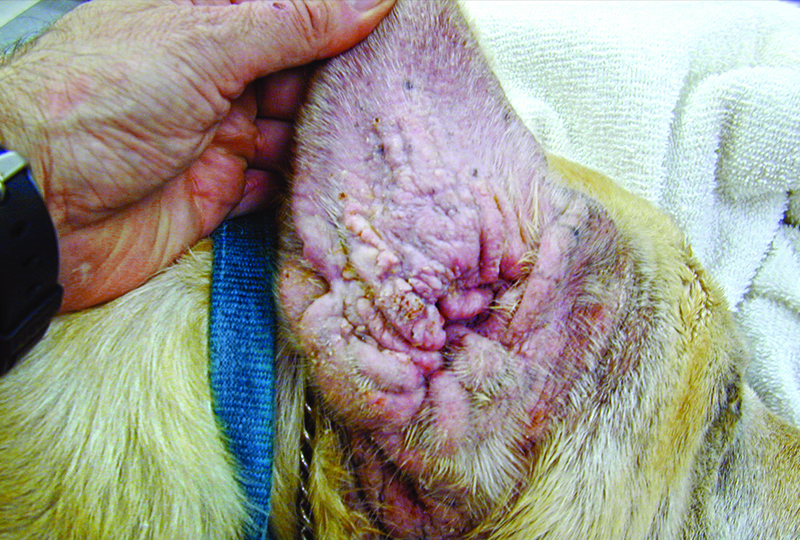 This article—the first of a 2-part series—discusses diagnosis of otitis externa. Topical therapy for treatment of otitis externa will be discussed in the November/December 2014 issue of Today’s Veterinary Practice (tvpjournal.com).

Otitis externa is a prevalent complaint in patients presented to small animal practices. This inflammatory disease of the external ear canal and/or pinna can have an acute or chronic presentation. Management of otitis externa depends on identifying and treating predisposing and perpetuating factors, as well as primary and secondary causes (Table 1). 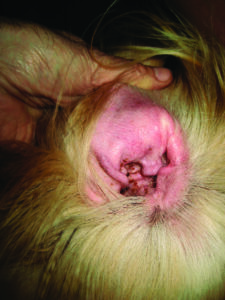 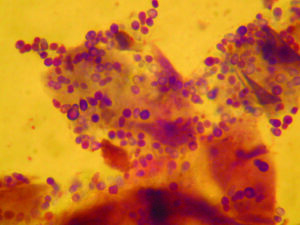 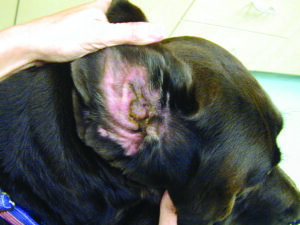 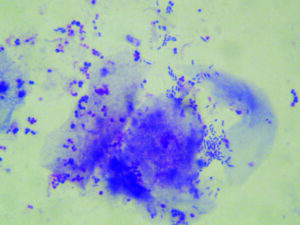 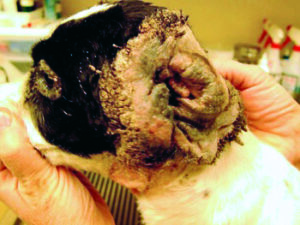 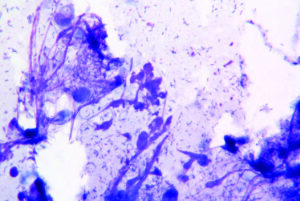 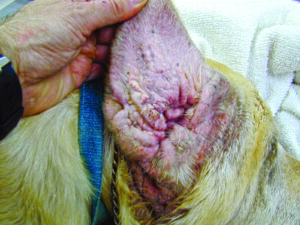 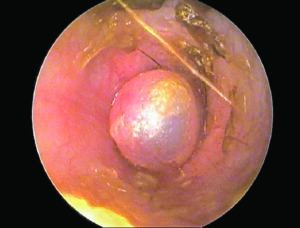 Predisposing factors alone do not cause otitis externa, but increase risk for development and persistence of chronic infection. These factors work in conjunction with primary or secondary causes, allowing otitis externa to become a significant problem.

Secondary Causes
Secondary causes of otitis externa do not create pathology in a healthy ear; instead, they incite disease in ears affected by a primary cause or predisposing factor. If the inciting cause or factor is inadequately controlled, secondary causes, such as bacterial or yeast overgrowth, typically become chronic issues.

Perpetuating factors are changes in anatomy and physiology of the ear that occur in response to otitis externa. They are most commonly seen in chronic cases and are not disease specific. These factors can accentuate development of secondary infections by providing environments and microscopic niches that favor their persistence.

In severe cases, perpetuating factors can ultimately prevent the resolution of otitis externa by leading to irreversible changes of the ear canal. They are the most common reason that otitis externa fails to respond to medical therapy and, ultimately, requires surgical intervention.

Diagnostic testing begins with a minimum database of:

Cytologic examination of ear canal discharge provides a brief overview of the aural environment, providing a foundation for therapeutic decisions and advanced diagnostics.1,2It is also the primary tool in identifying bacterial or yeast overgrowth.

Initial cytology should be performed prior to bacterial culture and sensitivity (C/S) testing because bacterial C/S is not recommended if only yeast overgrowth is noted. See In Practice: External Ear Canal Cytology for a stepwise approach to cytologic sample collection.

Indications for C/S include:

Resistant bacteria should be suspected if:

Ideally, topical or systemic antibiotic therapy should be discontinued 3 to 5 days prior to acquisition of culture samples.

When preparing the sample for submission, include any pertinent information regarding the organisms seen on cytology and a representative cytology slide.

In addition, if rods are observed on cytology—suggesting the presence of Pseudomonasspecies—additional antibiotic sensitivities should be requested with bacterial culture, including:

Once the laboratory report is in hand, in addition to susceptibility, it is important to review the reported minimum inhibitory concentration, which helps direct the choice or dose of antibiotic required.

The spectrum of bacteria and their sensitivity patterns seen in the middle ear (which is lined with ciliated columnar epithelium) and external ear canal (which is lined with epidermis) may differ due to variations in cellular composition. In a study by Cole and colleagues, different strains of Pseudomonas species, based on sensitivity pattern, were cultured from each location.3 Other studies have shown different strains of a bacterial species from a single sampling site.4,5

Otoscopes must have a strong light and power source, combined with at least 10× magnification that allows focusing within the normal length of the ear canal. Avoid using a battery-operated otoscope that has significantly lost power and light, which results in a diminished view of the deep ear canal.

Various sizes of otoscopic cones are required to properly examine ear canals based on patient size.

Ceruminolytics help break down larger pieces of waxy debris, such as ceruminoliths, and are gentle and soothing to the epithelium of the ear canal.

Advancement of fiberoptics, improved lighting, and miniaturization of video cameras, combined with rigid endoscopy, has led to development of fiberoptic video-enhanced otoscopy (FVEO). FVEO, despite its expense to purchase and maintain, is extremely beneficial for improved diagnostics, therapy, and client education.

The camera within the fiberoptic tip significantly magnifies and improves visualization of the ear canal. FVEO also facilitates permanent recordings via picture or video of the ear canal—including debris, foreign bodies, and masses—which can be shared with clients and other veterinarians.

In chronic otitis cases, the following imaging techniques may be helpful diagnostic tools. Table 2 lists these additional imaging modalities as well as the types of conditions they can diagnose and evaluate. However, the cost and availability of these diagnostics may make them prohibitive for some clients.

Computed tomography (CT) and magnetic resonance imaging (MRI) have been shown to be more reliable and accurate than radiography.6 CT is most commonly used due to efficiency and expense; however, if soft tissue masses or vestibular disease is suspected, MRI is more accurate. In one study, diagnosis of otitis media by CT was found to have an 86% sensitivity and 89% specificity compared with the gold standard of histopathologic diagnosis.6

Ultrasound has been used for the detection of fluid within the tympanic bulla, with 80% to 100% sensitivity and 74% to 100% specificity compared with the gold standard of CT.7

Cleaning and flushing the ears is critical for:

See In Practice: Ear Cleaning & Flushing for a stepwise description of appropriate cleaning and flushing. Typically, patients can be maintained with once to twice weekly flushing, but frequency of flushing should be determined on a case-by-case basis.

Otitis externa is a multifactorial inflammatory disease of the ear canals and pinnae that may become chronic. Chronicity is usually due to inadequate control of the primary cause or the presence of a perpetuating factor. Detection of a primary cause and any perpetuating and predisposing factors is essential for complete resolution and prevention of recurrence of otitis externa.

Identification of infectious organisms through cytology is an essential first step for initial treatment. Thorough ear cleaning and flushing coupled with appropriate antimicrobials, based on C/S when necessary, enhance treatment success.

Ashley Bourgeois, DVM, recently completed her residency at Animal Dermatology Clinic in Tustin, California. She has served as education chair with the American College of Veterinary Dermatology (ACVD). She received her DVM from University of Missouri and completed a small animal internship at Purdue University.

Wayne Rosenkrantz, DVM, Diplomate ACVD, is co-founder of Animal Dermatology Clinic. He is a clinical instructor for Western Veterinary Medicine College and an instructor for European School of Advanced Veterinary Studies. He is past president of the ACVD and a board member of the World Association for Veterinary Dermatology. He received his DVM from University of California—Davis.