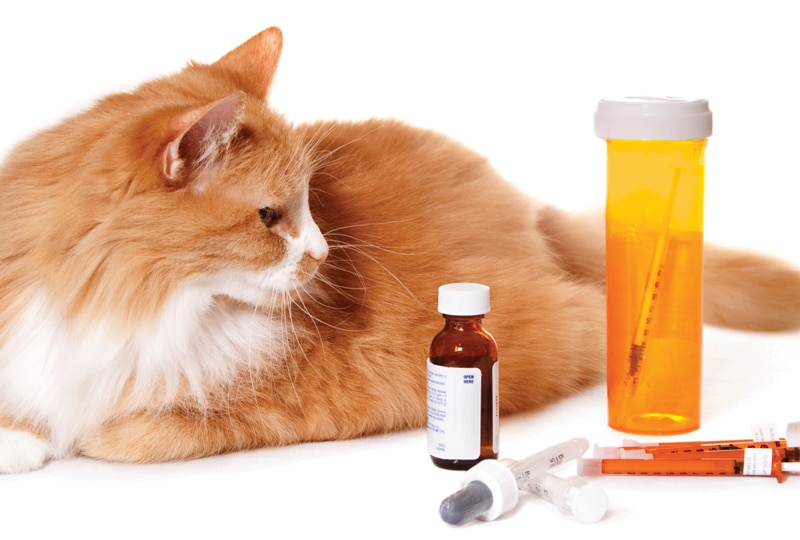 At some point in a cat’s life, it will most likely suffer from pain related to an injury, disease, or surgery, and veterinarians have a duty to try to alleviate this pain. In the January/February 2014 issue of Today’s Veterinary Practice, Dr. Sheilah Robertson addressed the challenges of acute pain assessment in cats. However, deciding how to effectively treat this pain presents its own difficulties.

Pain in cats—both acute and chronic—is difficult to treat because cats:

NSAIDs are one of the most common drug classes used to treat pain, and there is a robust body of information indicating that NSAIDs are effective in treating acute pain in cats.6,7 They have antipyretic, analgesic, and anti-inflammatory properties, which make them appealing therapeutic options; however, remember that there is not, and never will be, a completely safe NSAID for use in cats.

IS THERE AN IDEAL NSAID FOR USE IN CATS?

Based on our current understanding and the information available, if we were to design an ideal NSAID for use in cats, it would have certain important characteristics (Table 1).

NSAIDs work by inhibiting the production of prostaglandins (see The Role of Prostaglandins) from arachidonic acid by the enzyme cyclooxygenase (COX). There are 2 forms of the COX enzyme:

The ideal NSAID strikes a balance between COX-1 and COX-2 inhibition:

The Role of Prostaglandins

Prostaglandins are required for both everyday and compensatory functions of all organs and tissues. For example, prostaglandins are involved in GI protection and healing of GI ulcers as well as normal renal function and compensatory protective mechanisms of the kidney during hypovolemia.10 Prostaglandins are a predominant player in the production of pain in the periphery through sensitization of nerves. They are also involved in the processes of facilitation and amplification of noxious stimuli during central sensitization at the level of the dorsal horn of the spinal cord (Figure 1).12 Central sensitization has been shown, in veterinary species, to become established within 24 hours of a surgical procedure, and it contributes to postoperative pain and likely chronic pain. 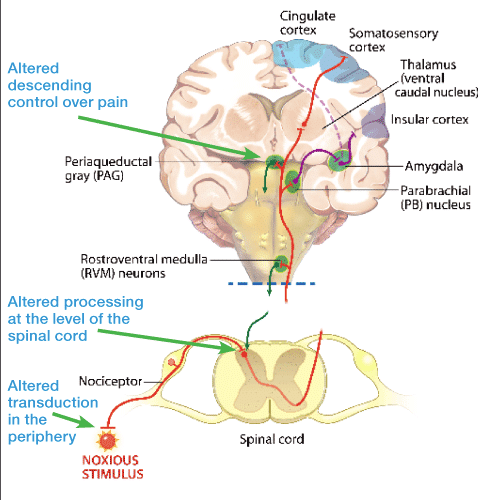 Figure 1. The role of prostaglandins in the periphery as sensitizers of pain fibers is well known. They are also involved in the facilitation and amplification of pain signals at various levels in the central nervous system; for example, central sensitization is assisted by prostanoids found in the dorsal horn of the spinal cord. Additionally, recent information suggests that locally produced prostanoids help decrease brain function in the areas involved in descending control over pain (endogenous analgesic systems).

Current thinking suggests that an ideal NSAID should have prolonged action at the site of inflammation and a short half-life in the central compartment, limiting exposure of normal, noninflamed, nonpainful tissues (Figure 2). This is because, given the broad distribution and role for prostaglandins throughout the body, if prostaglandins needed for normal, everyday functions are inhibited, there is potential for unwanted side effects. 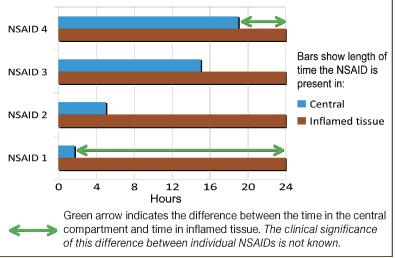 Figure 2. This figure illustrates the difference between 4 examples of NSAIDs, each dosed every 24 hours. All examples show tissue selectivity but have different half-lives. NSAID 1 has a short half-life, and is cleared quickly from the central compartment (blood), thus, theoretically limiting exposure of noninflamed tissues. In contrast, NSAID 4 has a relatively long half-life, exposing noninflamed tissues to the NSAID for most of the 24-hour period. The clinical significance of this difference between individual NSAIDs is not known.

Dr. Kay Brune, a leader in the field of NSAID research, has described a theory of “targeted tissue selectivity” that is a combination of enzyme specificity (selective COX-2 inhibition) and tissue selectivity, which, he has argued, might result in better toleration of the drug, while maintaining efficacy (see Concept of Tissue Selectivity).13

Tissue selectivity is a concept that involves the highly protein-bound nature of NSAIDs and the acidic environment of inflammation.

During the process of inflammation, there is extravasation, or leakage, of protein from blood vessels into the extracellular environment. Since NSAIDs are known to be “highly protein bound” at normal physiological pH, if an NSAID has been administered, it will be bound to this protein.

The acidic extracellular environment of the inflamed tissue causes dissociation of the drug from the protein due to the low pKa—acid dissociation constant—of the drug. After the drug dissociates from the protein, the increased free fraction of the active drug facilitates its movement into the cells where it then remains due to a phenomenon called ion trapping (passive movement of the drug into cells due to differences in pH between the intracellular and extracellular environment).13

This theory explains why NSAIDs may have a prolonged presence in inflamed tissue, while having a more rapid clearance from the central compartment—blood stream and other noninflamed organs.14

Ideally, for optimal practical administration, NSAIDs should be:

For cats specifically, palatable oral formulations facilitate administration and compliance—important components of pain management. Cats are selective about what they eat, and it is difficult to hide an unpalatable pill or medication in food or a treat, as is often done with dogs. If the cat won’t willingly take the medication, it must be restrained and dosed.

An NSAID formulation should be easily titrated, if necessary, and/or have an easy-to-determine dose. In tablet form, it should have a wide dose range that allows for administration of whole tablets, rather than fractioning tablets in order to stay within the therapeutic range.

First, toxicity studies of NSAIDs should demonstrate a robust and wide safety margin in healthy cats. No one has yet defined what a wide safety margin is, but veterinarians are encouraged to read the package inserts and Freedom of Information Summaries for the various NSAIDs.

Additionally, NSAIDs should have been evaluated and deemed to be appropriately safe in normal cats undergoing elective surgeries—the most common scenario for use of NSAIDs in general practice. Ideally, this information should be in the form of peer-reviewed literature, which gives the clinician a degree of comfort about the validity of the data.

Further, it would be ideal to have safety data in other target populations that would benefit from NSAID-induced pain relief, including cats with concurrent diseases, such as chronic kidney disease or cardiomyopathy.

For feline acute pain, there should be robust evidence of clinical efficacy for the target problems, such as perioperative pain control. For feline chronic pain conditions, efficacy should be demonstrated for alleviation of prolonged, maladaptive pain associated with chronic disease in cats, such as degenerative joint disease, spinal pain, stomatitis, cystitis, and cancer. Until very recently, efficacy of NSAIDs was very difficult to measure, and there was little evidence they provided pain relief. A recent breakthrough in clinical study design, along with a Clinical Metrology Instrument, may now allow NSAIDs to be tested for efficacy in a wide variety of chronic diseases.15

Safe NSAID Use for Chronic Pain

With respect to chronic administration of NSAIDs, there is an urgent need for more safety data in older cats that:
1. Suffer from painful conditions requiring long-term pain management and
2. Have concurrent diseases, such as renal impairment, hyperthyroidism, and liver disease.

AVAILABLE NSAIDS FOR USE IN CATS

In the U.S., there are 2 FDA-approved NSAIDs for short-term use in cats: robenacoxib and meloxicam.16

Robenacoxib (Onsior, novartis.com) is FDA-approved for control of postoperative pain and inflammation associated with orthopedic surgery, ovariohysterectomy, and castration in cats.

It has high selectivity for the inhibition of COX-2, sparing COX-1.17 The clinical benefit of sparing COX-1 in the cat has not been demonstrated; however, benefits associated with COX-1 sparing in other species have been described.

Elegant work by Ludivig Pelligand at the Royal Veterinary College in the UK has demonstrated that robenacoxib has a very short half-life (3 hours) in the blood, yet persists, and is active, for at least 24 hours in inflamed tissue in cats,17 which demonstrates “tissue selectivity.”

Robenacoxib is approved for short-term administration (up to 3 days in the U.S.) in cats ≥ 4 months of age, weighing ≥ 5.5 lb (2.5 kg) (Table 2).6 In the U.S., robenacoxib is available in 6-mg, yeast-flavored tablets that can be taken with or without food. It should not be given in conjunction with any other NSAID or corticosteroids.

Meloxicam (Metacam, us.boehringer-ingelheim.com) is FDA-approved for use in cats as a single, SC injection for postoperative pain. It is an example of a preferential COX-2 inhibitor that has greater inhibition of COX-2 than COX-1. Table 2 lists the recommended doses for meloxicam. Meloxicam is also considered tissue selective, but differs from robenacoxib in that it has a longer half-life and is, therefore, present in the central compartment longer.

Although the oral liquid suspension of meloxicam—approved for control of pain and inflammation associated with osteoarthritis in dogs—is not approved for cats, it has been used off-label for chronic pain management.

In the U.S., the FDA issued a black box warning for meloxicam in 2010 (see Management of Chronic Pain in Cats, November/December 2012, at tvpjournal.com), indicating that repeated use of meloxicam in cats has been associated with acute renal failure and death. It is most likely that the combination of the higher perioperative dose and then follow-up dosing was responsible for these adverse events, but no details are available in the public domain.