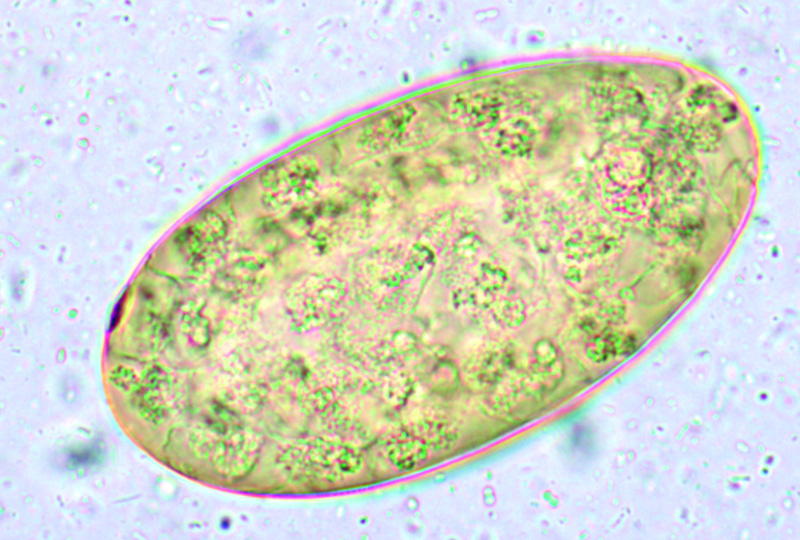 Helminth infections, both gastrointestinal and extraintestinal, are remarkably common in cats. Transmission, diagnosis, and treatment are discussed.

The mission of the Companion Animal Parasite Council (CAPC) is to foster animal and human health, while preserving the human—animal bond, through recommendations for the diagnosis, treatment, prevention, and control of parasitic infections. For more information, including detailed parasite control recommendations, please visit capcvet.org.

Helminth infection in cats is remarkably common. Recent surveys have documented helminths in more than 2/3 of adult cats examined in animal shelters in some areas.1 The most common nematode of cats, Toxocara cati, also has zoonotic potential, making control particularly important.

Dirofilaria immitis (heartworm) also infects and causes disease in cats, although diagnostic test results can be difficult to interpret.2

Broad-spectrum anthelmintic products are widely available to protect and treat cats, but their use and acceptance remain limited. To protect feline health and limit environmental contamination with zoonotic parasites, CAPC recommends use of year-round parasite control products in cats throughout all areas of the United States.3

Ascarids. Cats acquire infection with ascarids by ingestion of larvated eggs from the environment or ingestion of rodents or birds that have ingested eggs. In some surveys, T cati eggs are identified by fecal flotation in as many as 35% of cats, and necropsy surveys place the prevalence even higher.4,5

Kittens infected with T cati may have a pot-bellied appearance and general ill thrift; adult cats also commonly harbor infection. Migration of adult T cati into the stomach irritates the mucosa, resulting in vomiting, and T cati are commonly found in feline vomitus. The other feline ascarid, T leonina, is less common than T cati and not thought to be associated with clinical disease.3

Hookworms. The hookworm, A tubaeforme, is found in the small intestine of cats and has been associated with anemia and weight loss; Ancylostoma braziliense also occurs but is much less common in the United States.

Cats become infected with hookworms upon ingestion of larvae or ingestion of rodent paratenic hosts; unlike with dogs and Ancylostoma caninum, transmammary transmission with A tubaeforme is not known to occur.3

Diagnosis. Infection with ascarids and hookworms can often be diagnosed by fecal flotation. To ensure adequate sensitivity to allow detection, CAPC recommends that fecal flotation be performed by centrifugation, using an adequate sample size. However, eggs cannot be detected if only a single sex of worm is present or the nematodes are immature and, thus, prepatent.

Eggs of T cati are spherical and surrounded by a thick, roughly pitted shell (Figure 1), while eggs of A tubaeforme are oval and smooth shelled and contain a developing embryo (Figure 2). The prepatent period for T cati is 4 to 5 weeks, while that of A tubaeforme is 2 to 3 weeks. 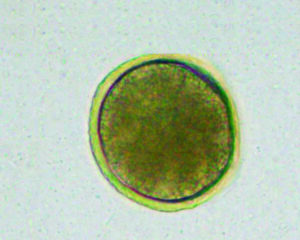 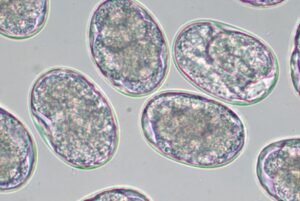 Treatment. Both ascarids and hookworms are readily treated with several different anthelmintics, including pyrantel, emodepside, milbemycin, moxidectin, and selamectin; the topical formulation of some of these compounds facilitates administration to cats.2

Historically, adult tapeworms in the intestinal tract have not been thought to cause significant clinical disease in cats. However:

Feline intestinal infections with Mesocestoides species are usually asymptomatic, but organisms in extraintestinal stages (tetrathyridia) that multiply asexually in the abdominal cavity can cause severe clinical sequelae, including death, in some cats.

Life Cycle & Transmission. All of these cestodes have an indirect life cycle, requiring 1 or more intermediate hosts:

Diagnosis. Diagnosis of cestode infection is challenging. Fecal flotation is recommended, and, when identified, eggs definitively confirm the presence of tapeworms. However, in most cats with cestodes, eggs from the small intestine are not recovered on fecal flotation,1but owner reports of proglottids are helpful in reaching a diagnosis.

Treatment. In cats that commonly ingest prey species, infections are likely, and presumptive treatment may be warranted. Praziquantel and epsiprantel are label-approved as effective against T taeniaeformis and D caninum, and can be used off-label for treatment of intestinal Mesocestoides species.

Gastrointestinal trematode infection in cats is rare compared with nematode and cestode infection. However, occasional infections with Alaria species or Nanophyetus salmincola are seen in certain geographic areas.

Life Cycle & Transmission. Alaria species infections are acquired when cats prey on intermediate or paratenic hosts, such as frogs and snakes, that harbor the metacercariae. Migration of immature Alaria species through the lungs can lead to pulmonary damage, with focal areas of hemorrhage evident.3

Feline infection with N salmincola occurs when cats ingest metacercariae in salmonid fish. Although trematodes develop in the small intestine, classic “salmon poisoning” disease due to Neorickettsia helminthoeca infection has not been described in cats.3

Diagnosis. Diagnosis of infection with Alaria species, N salmincola, and other trematodes usually requires concentrating eggs by sedimentation, because the eggs do not readily float in the specific gravity of many flotation solutions.

Identity of trematode eggs can usually be confirmed by the presence and shape of the operculum, general egg morphology, and size. For example, eggs of Alaria species are approximately 120 microns × 70 microns, are operculate, and contain an undifferentiated embryo when shed (Figure 3). 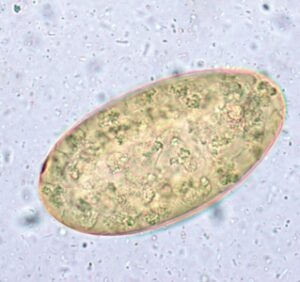 Treatment. Although no products are label-approved for trematode treatment in cats, praziquantel is expected to be effective.3

The 2 most common extraintestinal nematodes infecting cats in North America are heartworms (D immitis) and feline lungworms (Aelurostrongylus abstrusus).3 Both parasites can cause respiratory disease in cats due to pulmonary damage.

The death of developing D immitis may lead to pulmonary, bronchial, and alveolar disease in cats collectively referred to as heartworm-associated respiratory disease; adult heartworms in the pulmonary artery are associated with sudden death.

Life Cycle & Transmission. D immitis is transmitted by mosquitoes, and dogs are considered the main reservoir host. Microfilariae rarely persist in cats long enough for them to serve as a source of infection to mosquitoes.9

Snails and slugs are required intermediate hosts for A abstrusus, but infections are most common in cats allowed to prey on rodent, avian, or lizard paratenic hosts.

Diagnosis. Diagnosis of heartworm infection in cats is complicated by the low number of worms present and the robust immune response of the feline host.

In cats with respiratory disease or other clinical signs suggestive of heartworm infection, both antigen and antibody tests should be performed (see Feline Heartworm: Antigen Versus Antibody Tests). Heat treating serum prior to antigen testing destroys immune complexes, revealing antigen for detection.2 Radiography and echocardiography can also be helpful in assessing disease status and confirming infection.

Diagnosis of A abstrusus depends on identification of first-stage larvae in fecal samples (Figure 4). Procedures that allow recovery of A abstrusus larvae include direct smear, centrifugal fecal flotation, and Baermann examination. 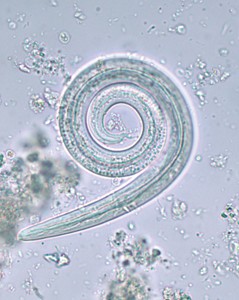 Treatment. Adulticide treatment is not recommended for cats with heartworm. However, cats with dyspnea or respiratory distress should receive supportive care, such as corticosteroids, oxygen therapy, or bronchodilators. Preventive use is also recommended to limit additional infections.9

There are no label-approved treatments for A abstrusus infection, but efficacy has been documented with topical moxidectin and topical emodepside.10,11

Both antigen and antibody tests are available to identify feline heartworms.

Antigen tests are very sensitive and specific, but cats with heartworm often harbor a low number of worms, and antigen levels are correspondingly low.9 In addition, the strong immune response appears to result in antigen—antibody complex formation, preventing detection of antigen on commercial tests.2

Antibody test results can be similarly problematic to interpret. Many cats in endemic areas may be antibody positive, indicating that a past or current infection has likely occurred, but the cat is clinically healthy and infection free.

Clinical Signs & Transmission. Cats with peritoneal mesocestodiasis develop vomiting, diarrhea, weight loss, and ascites due to asexual replication of tetrathyridia (immature forms) of Mesocestoides species in the peritoneal cavity, but some clinically silent infections are discovered during routine laparotomy and ovariohysterectomy. The route of exposure responsible for the peritoneal form is not known.

Diagnosis. Diagnosis may be suspected at ultrasonography and is confirmed by cytology or laparoscopic examination. Calcareous corpuscles in cytologic fluid help confirm the presence of a cestode.

Feline infection with systemic trematodes, including Paragonimus kellicotti in the lungs and Platynosomum fastosum in the liver, is also relatively uncommon. However, because of the severe disease that develops in infected cats, these parasites are important in certain endemic areas.

P fastosum is a fluke of the bile ducts of cats in Florida, the coastal southeastern U.S., and Hawaii; infections are also common on several Caribbean islands. The condition is commonly called lizard poisoning because cats usually acquire infection following predation on lizards and other reptile paratenic hosts.

Clinical Signs. P kellicotti infections may be asymptomatic or can lead to respiratory disease characterized by dyspnea, pneumothorax, and hemoptysis.

Diagnosis. P kellicotti infections often result in large pulmonary cysts that are visible on radiographs, and the characteristic large, operculate eggs may be identified on transtracheal wash or fecal sedimentation (Figure 5).

P fastosum diagnosis can be supported by ultrasonography, which reveals dilated bile ducts and, occasionally, trematodes. Eggs may be detected on fecal sedimentation (Figure 6), but when biliary hyperplasia is severe, liver biopsy may be necessary to achieve a diagnosis because cholestasis prevents egress of eggs. 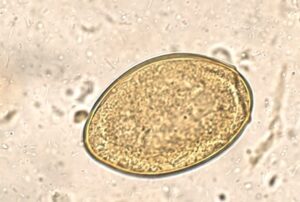 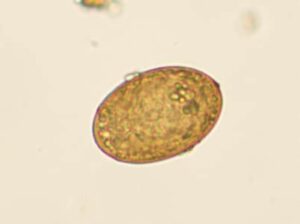 Treatment. For P kellicotti infections, repeated treatment is often necessary, but both fenbendazole and praziquantel have been reported to be effective.13,14

For P fastosum infections, praziquantel is the recommended treatment, although, in severe cases with liver failure, the prognosis is guarded.15

Many feline helminths are zoonotic, underscoring the importance of their control.

T cati is associated with visceral and ocular larva migrans in humans who ingest larvated eggs from contaminated soil. T cati adults have also been recovered from humans, usually children, but these infections are generally attributed to ingestion of adult worms from feline vomit.16

The zoonotic potential of A tubaeforme is considered low, but cutaneous larva migrans is reported and is commonly seen in humans exposed to A braziliense contaminated soil.3

Other feline helminths may occasionally infect humans, but cats are not considered the primary source. For example, human infection with P kellicotti has been reported following ingestion of raw crayfish,18 and Mesocestoides species, Alaria species, Spirometra species, and N salmincola infections have all been described following ingestion of, or contact with, tissues from infected intermediate or paratenic hosts.3,7,19,20

Although not always appreciated by cat owners or veterinarians, infection with helminths is common in many cats. Cats with outdoor access or those that hunt are at increased risk, but indoor cats are not free of parasites.

Helminths can cause disease in both cats and, potentially, their human families. Reducing parasitism in cats serves both feline and public health. CAPC offers specific strategies to protect cats from parasites year-round through the recommendations published at capcvet.org.

Rick Marrinson, DVM, is the owner of Longwood Veterinary Clinic in central Florida and a board member of the Companion Animal Parasite Council. He received his DVM from Oklahoma State University.