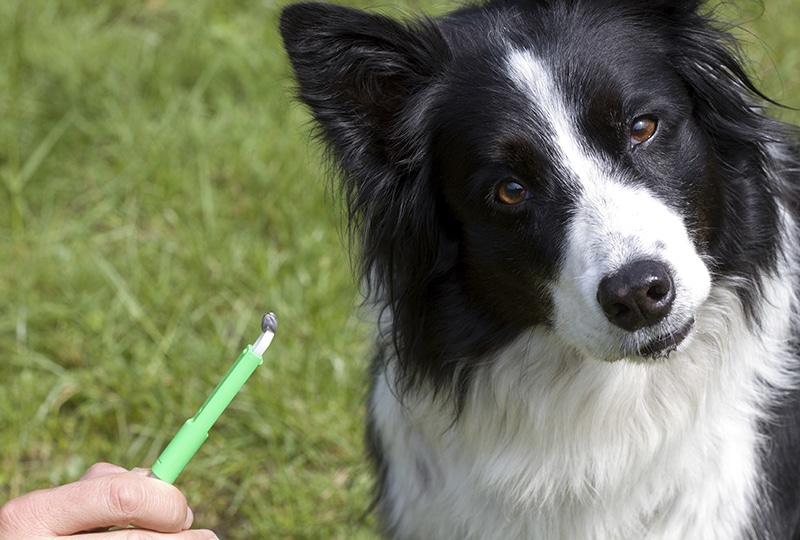 Welcome to one of 3 new columns in this issue, brought to you in partnership between the National Center for Veterinary Parasitology (ncvetp.org) and Today’s Veterinary Practice. The mission of the NCVP is to further the discipline of parasitology by bringing together partners from academia and industry to address emerging issues, serving the veterinary profession by developing future leaders in veterinary parasitology, and providing diagnostic and consulting services worldwide. Its goals include to:

Ticks on domestic cats are often overlooked as parasites and vectors of disease agents. This oversight results from the belief that cats are fastidious groomers and remove these ectoparasites before attachment. It is also possible that some cats spend a majority of their time indoors, leading owners to believe that the cats are not exposed to ticks. There are a limited number of studies that report feline tick infestations and occurrence of feline tick-borne diseases in the United States. This article will provide updated information about feline ticks and tick-borne diseases in the U.S.

Amblyomma americanum, the lone star tick, lives in wooded habitats, especially woody areas with large populations of white-tailed deer, in the south central and southeastern U.S., with a range extending along the Atlantic coast from New York to Florida and to Texas and Oklahoma.

In the southeastern U.S., nymphs and adults are most active in late spring, while larvae appear in late summer. All stages of this tick (ie, larvae, nymphs, adults) feed on cats, dogs, livestock, wildlife, and humans.1 The lone star tick is an important vector for Cytauxzoon felis (cytauxzoonosis),2,3 Francisella tularensis (tularemia),4 and Ehrlichia species (ehrlichiosis) in domestic cats.5

Dermacentor occidentalis, the Pacific coast tick, is distributed throughout the western U.S., along the Pacific coast. Adults feed on medium-large mammals, such as cattle, horses, deer, dogs, cats, and humans; immature ticks are thought to feed on small mammals.6 Adults and nymphs are most active during late winter and early spring, while larvae are active from summer through winter, with peak activity in July.7 The Pacific coast tick is a vector for F tularensis in cats.4

Dermacentor variabilis, the American dog tick, is found in grassy meadows and along trails in forested areas throughout the eastern, south central, and western U.S. Larvae and nymphs actively feed on small mammals in late winter and spring, while adults feed on cats, dogs, livestock, wildlife, and humans. Adult D variabilis are most active in late spring and early summer.1 The American dog tick can be a vector for C felis,8 F tularensis,4 and Ehrlichia species5,9 in cats.

Ixodes scapularis, the black-legged tick or deer tick, is most abundant in dense, humid, wooded habitats, and widespread throughout most of the eastern, south central, and midwestern U.S. Immature stages usually feed on small mammals, lizards, and birds. Seasonal activity peaks for nymphs and larvae in May through August and July through September, respectively. Adults feed on medium- and large-sized animals, especially white-tailed deer, and become most active during October and May.1,10 The black-legged tick is a vector for Borrelia burgdorferi11,12 and Anaplasma phagocytophilum (anaplasmosis)9,13 in cats. 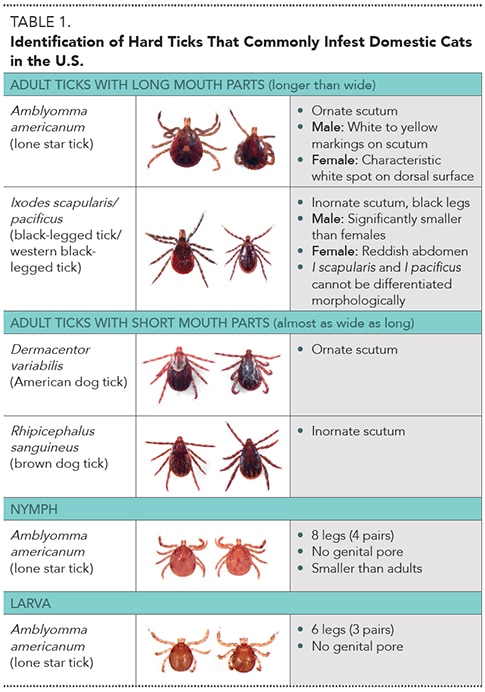 Transmission. Cytauxzoonosis—a C felis infection transmitted by A americanum2,3 and D variabilis8—is the most severe disease transmitted by ticks to domestic cats.15

Seasonal activity of ticks is a key component in the transmission of C felis to cats because the number of cytauxzoonosis cases increase when A americanum is more active.19 In addition, outdoor cats living in the wooded habitats, where reservoir hosts and ticks are present, are at higher risk for C felis infection.17 Neither age nor breed predisposition for infection in cats has been documented.

Diagnosis. Infection with C felis in domestic cats causes severe, acute disease characterized by fever, inappetence, anorexia, dyspnea, and icterus. The disease progresses quickly, with fatalities reported 1 to 7 days after clinical signs. Diagnosis of cytauxzoonosis was historically based on observation of C felis piroplasms in stained thin blood smears by light microscopy; however, the current gold standard is detection of C felis DNA extract from anticoagulated whole blood by polymerase chain reaction (PCR) amplification, which allows detection of infection prior to onset of clinical signs.20

Treatment. Recommended treatment for cytauxzoonosis is atovaquone (15 mg/kg PO Q 8 H), along with azithromycin (10 mg/kg PO Q 24 H) and excellent nursing care.21 Historically, imidocarb dipropionate was used, but is no longer recommended due to its lack of efficacy and side effects.21

Diagnosis. Clinical signs of feline anaplasmosis include fever, lethargy, anorexia, joint pain, lameness, enlarged lymph nodes, weight loss, periodontal disease, conjunctivitis, and neurologic signs.13,23 Diagnosis can be based on clinical signs, history of tick exposure, and microscopic detection of morulae within neutrophils in acutely infected cats. However, morulae may be difficult to find as rickettsemia can be low.

Recently, serologic methods, such as an immunofluorescence assay (IFA) and enzyme-linked immunosorbent assay (ELISA) followed by PCR, are preferred for diagnosis confirmation. However, several studies noted negative PCR results from cats that were clinically ill and antibody positive.22-24 These confounding results in DNA and antibody-based diagnoses may be due to A phagocytophilum being sequestered in low numbers in tissues, or infected cats quickly clearing the rickettsial agent.

Transmission. Tularemia—an infection caused by Francisella tularensis—is a notifiable zoonotic disease that occurs naturally in the U.S.20 Cats, dogs, and humans are exposed to F tularensis through direct contact with infected wildlife, vectors, or contaminated environment; cats are more susceptible to tularemia than dogs.

Throughout the U.S., F tularensis transmission to cats occurs via bites from infected A americanum, D andersoni, D occidentalis, and D variabilis. Cats can also be exposed to the disease from hunting and eating infected wildlife, such as cottontail rabbits, hares, and rodents.

Diagnosis. Clinical signs in cats include fever, anorexia, marked depression, dehydration, lymphadenopathy, splenomegaly, hepatomegaly, icterus, and acute oral or lingual ulcers. Diagnosis is most commonly based on clinical signs and confirmed by a titer rise in specific serum antibodies.

Diagnosis & Treatment. Cats experimentally infected with B burgdorferi showed signs of lameness and multilocalized inflammation, such as arthritis and meningitis.12 Recommended treatment for suspected Lyme borreliosis in cats is doxycycline (10 mg/kg PO Q 12–24 H for 28–30 days).11,12,23

Diagnosis. Clinical signs include fever, lethargy, inappetence, weight loss, and polyarthritis. Diagnostic criteria for feline ehrlichiosis have not yet been established, although positive serology and organism detection in blood support the diagnosis.

Treatment. For cats with suspected clinical ehrlichiosis, administration of doxycycline (10 mg/kg PO Q 24 H for a minimum of 28 days) is recommended.5,9

If only a few ticks are present on a cat, manually remove individual ticks with forceps and gloved hands. When cats are heavily infested with ticks, or too fractious to handle, sedation may facilitate tick removal and acaricide application.

To remove an intact tick:

Certain methods, such as suffocation with petroleum jelly, heat from matches, and acetone (finger nail polish remover), should never be used to remove a tick. These methods are not effective, may interfere with tick identification, and may increase the likelihood of pathogen transmission through regurgitation.27,31

Most studies have focused only on humans and dogs; cases in cats have been limited. However, tick paralysis in cats, caused by infestation with I holocyclus and I cornuatus, is considered a common condition in Australia.19,25 While cases of feline tick paralysis have not been reported in the U.S., canine cases are common and are associated with infestation by D variabilis, which infests cats.1

Diagnosis. Common clinical signs include hindlimb weakness, ataxia, pupillary dilation, and dysphonia or aphonia due to laryngeal paralysis. Additionally, retching, vomiting or regurgitation, and bladder voiding dysfunction may occur. Diagnosis in cats is generally determined by detection of ticks, along with typical clinical signs.26

Treatment. The 3 key components for treating cats affected by tick paralysis are (1) removal of tick(s), (2) administration of canine-derived tick antitoxin serum (TAS), and (3) supportive care. Recovery time varies depending on severity of disease. Prognosis for cats is better than that for dogs.26

To reduce the risk of tick infestation and tick-borne disease, we recommend:

Acaricides should be applied to both outdoor and indoor cats because:

Currently, etofenprox, fipronil, and flumethrin are approved acaricides for use on cats.27

Application of the 10% imidacloprid/4.5% flumethrin collar was shown to protect cats against the transmission of C felis from infected A americanum.30

Home hygiene and environmental management are essential for controlling ticks.