If we understand the life cycle of roundworms and how to effectively communicate this to clients, we can better treat and prevent their transmission.

Andy Moorhead, DVM, MS, PhD, is an assistant professor in the Department of Infectious Diseases at the University of Georgia College of Veterinary Medicine and the director of the Filariasis Research Reagent Resource Center. He received his DVM from North Carolina State University, his MS from Purdue University, and his PhD from Cornell University. His research interests include host-specificity of filarial infections, heartworm treatment, and communication with clients about parasites.

Dogs can become infected with many infectious agents, but the “unholy trinity” of roundworms, hookworms, and whipworms ranks among some of the most common and well known. For many reasons, including persistence of infectious stages in the environment and zoonotic potential (i.e., larva migrans), it is advantageous to prevent these parasitic infections and the resulting soil contamination.1 In this first in a series of 3 articles, we will discuss roundworms in dogs. More information about these parasites is located at capcvet.org.

Roundworm is the common name for the ascarid that affects dogs, Toxocara canis. This parasite is extremely common in puppies, and treatment is relatively straightforward.2 As with other parasites, if we understand their life cycle, we can better treat and prevent their transmission.

It Is All About the Life Cycle

We will start our life cycle discussion by describing the adult worm. Adult T. canis worms are easily identified; they are 4 to 6 inches long, stout, and white. It is important that you be able to identify the adult worms because clients often bring you worms that they found in their dog’s vomitus or feces. As a rule, T. canis is found primarily in puppies, although some studies have suggested that these worms may be present in up to 33% of adult dogs.3 The reason for the predisposition of patent infections in puppies is explained by migration pattern differences in puppies versus adult dogs.

Adult male and female worms mate in the dog’s intestine. The female worm will then produce literally thousands of eggs per day, which are shed in the feces into the environment. When shed, these eggs are undeveloped and not immediately infective; depending on the temperature, they will become infective in 2 to 4 weeks, at which point they contain the infective third-stage larvae (L3)2 (FIGURE 1). 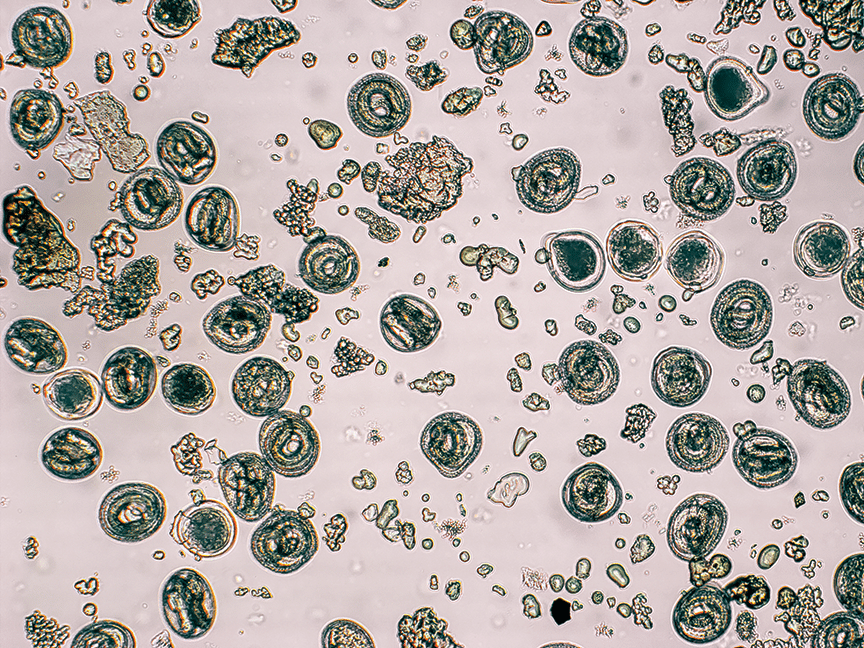 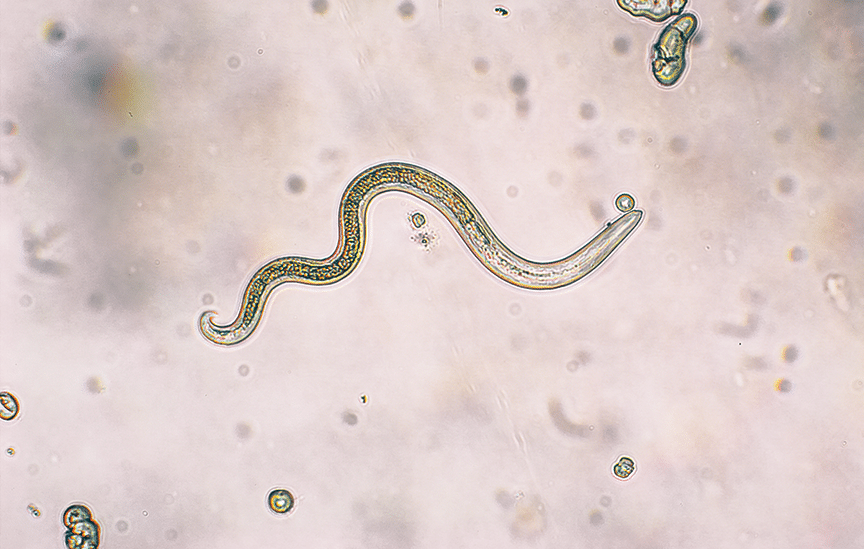 After roundworm eggs are ingested by a suitable host, whether it is a definitive canid host or accidental human host, the eggs will hatch and release L3 into the host’s intestine. After entering the intestine, the L3 will penetrate the intestinal wall and travel via the blood to the liver and then to the lungs, where they will literally burst into the alveoli. When this occurs in large numbers in puppies, the resulting condition is verminous pneumonitis. After entering the alveolus proper, L3 can take 1 of 2 paths: tracheal or somatic.2

Tracheal migration: Larvae that ascend the trachea are swallowed and travel to the intestine, where they will mature to adults.

Somatic migration: Larvae that reenter the alveolar blood vessels travel to the muscles or organs, where they become encysted and their development is arrested. In humans, this migration pathway is also followed and results in the condition known as larva migrans.2

To understand the main reason why puppies are infected more commonly than adult dogs, we have to refer back to the roundworm life cycle. Puppies can become infected by the transplacental or transmammary route.

Transplacental route: As mentioned earlier, after somatic migration, worms become encysted in tissues and their development is arrested. However, if a dog with encysted larvae becomes pregnant, these larvae become reactivated and travel via the umbilical vein to the in utero puppies’ liver and lungs. At the time of birth, when the puppies’ lungs inflate, the larvae then burst out and travel to the intestines via tracheal migration, where they mature in 3 weeks.

Transmammary route: Although the transplacental route is considered the primary route of roundworm transmission to puppies, encysted larvae can also infect puppies that drink the milk of their infected mother.

Larva migrans is a serious condition that results from human infection with either T. canis or T. cati parasites. It is typically associated with the eye (ocular larva migrans) or viscera (visceral larva migrans)1; a third type, neural larva migrans, is typically associated with the ascarid that affects raccoons, Baylisascaris procyonis.4 Larva migrans occurs primarily in children, as a result of their propensity to eat dirt, which can potentially contain infectious eggs.1,5 However, antibodies to T. canis worms can be present in adult humans, potentially indicating exposure.6

Prevention of Roundworms in Dogs

Preventing maturation of larvae transmitted by the transplacental or transmammary route can be accomplished by deworming puppies every 2 weeks up to 12 weeks of age. By preventing roundworm maturation, you prevent egg shedding and environmental contamination.

The easiest way to prevent larva migrans is also to deworm puppies before the worms become adults. If the worms do not make it to the adult stage, they cannot produce eggs,2 thereby reducing the risk for human infection.2 The other obvious way to prevent this disease is to pick up and discard dogs’ feces.

Roundworm eggs are extremely resistant to common disinfectants, including bleach, and environmental changes. What makes them even more persistent is their sticky outer coating, which makes them very difficult to remove from surfaces, including concrete. Eggs can survive for years, although larvae will be killed by extreme heat and prolonged exposure to sunlight. Because of the resilience of eggs in the environment, humans, particularly children, can ingest these eggs. Children sometimes engage in pica or geophagia, which facilitates infection with these eggs.1,5,7 Children’s sandboxes can be contaminated with eggs of both T. canis and T. cati (the feline counterpart of T. canis; BOX 1).8 However, this contamination is preventable if appropriate control measures are taken.9

BOX 1 Roundworms in Cats
The life cycle of Toxacara cati is similar to that of T. canis roundworms, with a few exceptions.2

The Ben Franklin quotation, “An ounce of prevention is worth a pound of cure” can apply to roundworm infections. This preventive ounce can be condensed for clients into 3 simple points.

Pick up dog feces. If roundworm eggs are not in the environment, other animals cannot become infected. Follow this practice at your clinic, and convince your clients to do it at home.

Deworm dogs regularly. Using an approved anthelminthic, deworm puppies at 2, 4, 6, and 8 weeks of age and then monthly, if possible.

Emphasizing prevention information to clients in a concise, bullet-point format will help them understand and adhere to the recommendations. Client adherence can markedly reduce the risk for roundworm infection of pets and humans. If you emphasize only 1 point, it should be that one easy way that clients can control roundworms is to routinely pick up their dog’s feces.

8. Uga S. Prevalence of Toxocara eggs and number of faecal deposits from dogs and cats in sandpits of public parks in Japan. J Helminthol 1993;67(1):78-82.