Analyzing the use of carprofen for dogs with osteoarthritis, the recommended dosage of carprofen, and the additional benefits that can be seen with the use of adjunctive agents.

Canine osteoarthritis results in chronic pain and decreased physical activity. Nonsteroidal anti-inflammatory drugs (NSAIDs) are widely recognized as the standard of care for chronic pain, including OA.1 This article focuses on carprofen for dogs, one specific NSAID.

OA, sometimes referred to as degenerative joint disease or DJD, affects approximately 1 in 5 adult dogs in the United States and is the number 1 cause of chronic pain in dogs.2 Statistics from 2016 estimate that about 10 million to 12 million dogs in the United States show signs of OA, resulting in a monthly per-clinic average of 45 visits from arthritic dogs, with older and heavier dogs being overrepresented in this population.2

OA is characterized by pain and lameness due to tissue changes and loss of articular cartilage in the synovial joint and may also include remodeling of the subchondral bone.3,4 FIGURE 1 illustrates the basic pathophysiology of OA. 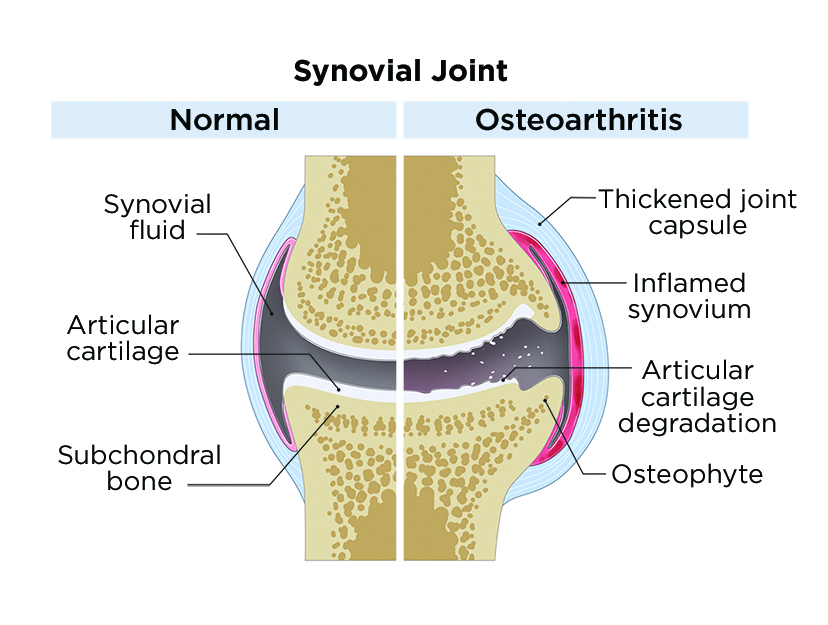 Figure 1. The molecular and biomechanical pathophysiology of osteoarthritis in dogs and humans is very similar, characterized by breakdown of joint cartilage and inflammation within the synovial joint. (A) Diagram of normal versus osteoarthritic joint anatomy. Note the roughened surface of the articular cartilage, the thickened synovium and articular capsule, and the formation of bone spurs (osteophytes) on the osteoarthritic side. Illustration: Kip Carter.

Evidence of Effectiveness of Carprofen for Dogs

Clinical trials using both subjective and objective analysis have demonstrated improvement in limb function with the use of carprofen in dogs with naturally occurring OA.4,5 Additionally, one study looked at the effect of carprofen on structural changes to the subchondral bone and found that it may be helpful in slowing or preventing abnormal metabolism of subchondral osteoblasts in the OA model.6 The same study also found that carprofen may be helpful in reducing the severity of cartilage lesions.6 However, NSAIDs have also been associated with chondrotoxicity.7

Carprofen is certainly not a new drug, having been approved in 1996 under the brand name Rimadyl (Zoetis, zoetis.com). Several generic options are now available. Carprofen was approved by the U.S. Food and Drug Administration for the relief of pain and inflammation in dogs and is shown to be clinically effective for the relief of signs associated with osteoarthritis in dogs.8

Carprofen is a non-narcotic NSAID with both analgesic and antipyretic properties. As with most NSAIDs, carprofen works by inhibiting cyclooxygenase (COX) enzymes (selectively inhibiting COX-2 over COX-1; FIGURE 2), thereby inhibiting the release of several prostaglandins involved in chronic inflammatory reactions that are thought to be present in canine OA.8 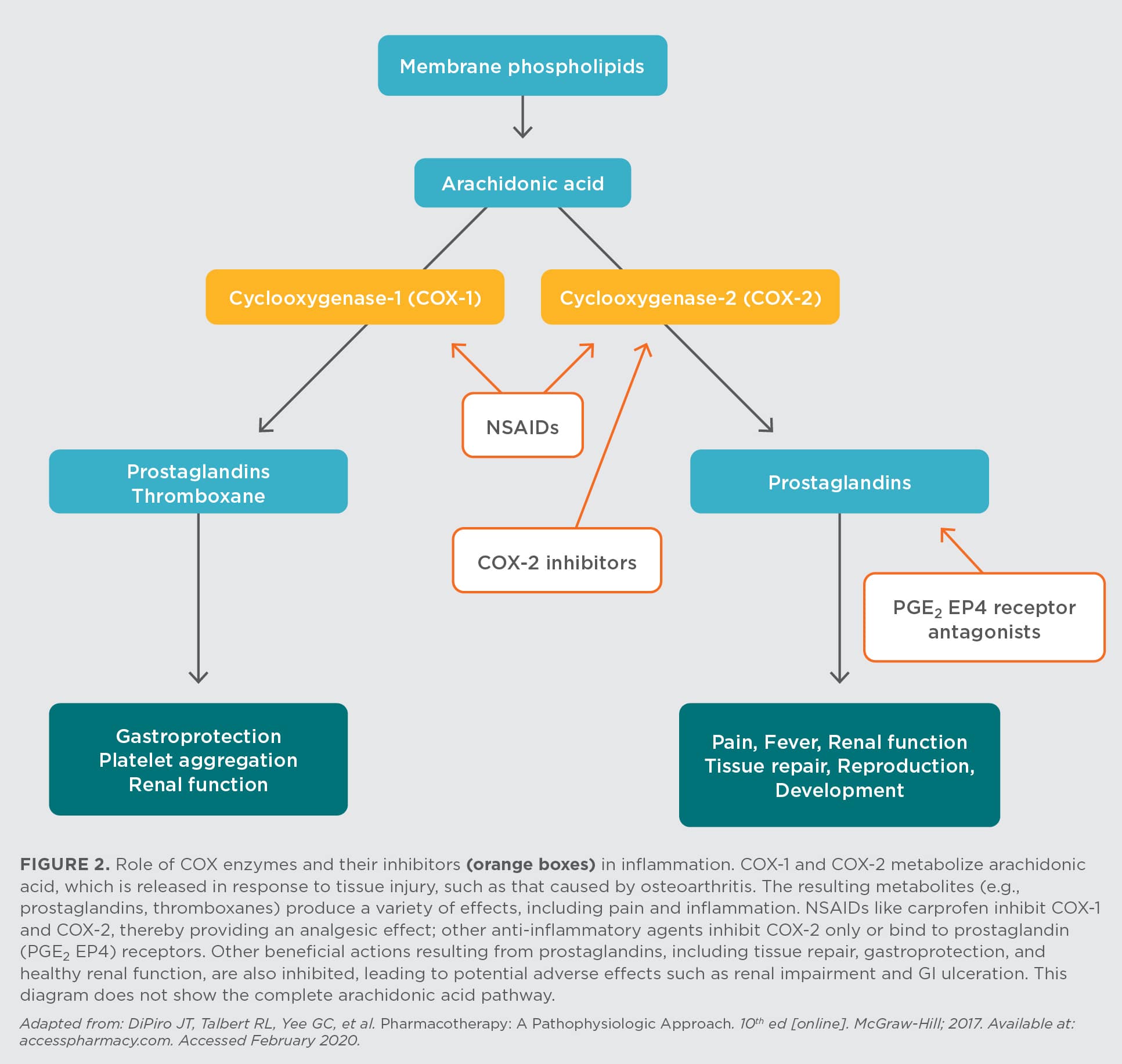 Carprofen’s labeled dose is 4.4 mg/kg PO q24h or divided into 2 daily doses of around 2.2 mg/kg q12h.8 While the package insert recommends use of the “lowest effective dose for shortest duration consistent with individual response,” animal studies were carried out for only 42 consecutive days without significant adverse effects.8 Therefore, chronic use of carprofen for OA pain warrants monitoring for long-term side effects, which should include a complete metabolic panel to assess changes in renal and hepatic function.8 Dose adjustments and discontinuation may be considered based on results. Dose or frequency reduction may be warranted if any indication of hepatic impairment (such as low albumin) is found.

Carprofen has high oral bioavailability (90%). Peak plasma concentrations are reached 1 to 3 hours after oral administration; the half-life has been shown to be approximately 8 hours.8 Carprofen is metabolized via glucuronidation in the liver and is eliminated in feces (70% to 80%) and urine (10% to 20%). However, some enterohepatic recycling is expected.8,9

Adverse Effects, Safety, and Drug Interactions for Carprofen in Dogs

While carprofen’s COX-2 inhibition is effective in reducing inflammation, prostaglandins synthesized via COX-1 are necessary for normal gastrointestinal (GI) and renal functioning. Therefore, despite carprofen’s selectivity for COX-2, its use has been associated with renal and GI toxicosis in the form of vomiting, diarrhea, inappetence, and, in severe cases, melena, GI ulceration, and GI bleeding.8 A new analgesic agent of the “priprant” class works further down the pain cascade to inhibit a prostaglandin receptor thought to be specific to OA, thereby theoretically avoiding adverse effects of COX inhibition (FIGURE 2). For more information on this drug, please see the article “Grapiprant for Control of Osteoarthritis Pain in Dogs” in the September/October 2019 issue of TVP.

Idiosyncratic hepatotoxicity has been reported in Labrador retrievers receiving carprofen at recommended doses.10 In these cases, the use of carprofen could not be definitively determined as the cause for increases in liver enzymes. In a study of 750 dogs, 1 Labrador retriever and 1 golden retriever showed signs of liver toxicosis that resolved after discontinuation, but 1 of the 2 dogs required intensive care.5 Additionally, clinical field studies report alanine aminotransferase and aspartate aminotransferase increases in 5.4% and 2.3% of dogs, respectively.8 Consequently, monitoring of hepatic function may also be warranted in some patients, especially large-breed dogs.8,10,11

While the manufacturer’s package insert does not specifically list drug interactions, concomitant use of carprofen with other NSAIDs, corticosteroids, or other ulcerogenic drugs should be avoided due to increased risk of GI ulceration. Additionally, care should be taken to review and monitor efficacy and side effects when carprofen is given with other highly protein-bound drugs.8

When carprofen is being dispensed, a client information sheet should be provided along with verbal counseling on potential adverse effects and discussion of monitoring parameters. Clients should be counseled to contact their veterinarian if they observe any adverse effects.12

Combination of Carprofen With Adjunctive Agents

NSAIDs are the treatment of choice for pain associated with OA. However, a review of clinical studies suggests that carprofen (or any NSAID) alone still fails to provide complete pain relief.13 Therefore, it is often necessary to look to adjunctive agents that can be used concomitantly with carprofen to improve clinical efficacy. These agents may be of particular use in canine OA patients, which are commonly older and have comorbidities that limit the use of NSAIDs.

Amantadine is an antiviral agent that has been used in humans for other indications (e.g., Parkinson’s disease) due to its effect on the dopaminergic system. Amantadine is an N-methyl-D-aspartate (NMDA) receptor antagonist that is thought to work by blocking the binding of glutamate or aspartate to this receptor, thereby potentially inhibiting neurobiologic changes brought on by chronic inflammation and neuropathic pain.13 Amantadine has been shown to reduce experimental sensitization in chronic back pain in humans.13

In dogs, amantadine in combination with meloxicam statistically improved pain scores and physical activity significantly compared to meloxicam alone, but only after 21 days of treatment. This study suggests that amantadine is a reasonable adjunct to carprofen therapy to improve function through added pain relief in dogs with NSAID-refractory osteoarthritic pain.

Hyaluronan, or hyaluronic acid (HA), is a glycosaminoglycan that is a main component of synovial joint fluid. It inhibits inflammatory cytokines and prostaglandins in synoviocytes. When HA is administered intra-articularly, the desired clinical effect is pain relief and disease-modifying activity.14 When administered with carprofen, HA may also help to counteract the chondrotoxic effects of carprofen. In fact, HA given with carprofen was shown to cause less destruction of collagen structure compared with carprofen alone.14

Carprofen at a Glance

Overall, carprofen is effective in reducing pain in dogs with OA. However, additional benefit can be seen with adjunctive agents. Care should be taken to monitor for signs of adverse effects from the use of carprofen. Clients should be counseled regarding risk reduction with use of this drug, including giving carprofen with food to reduce the risk of GI effects and providing access to plenty of water to reduce risk of renal toxicosis. Clients should be reminded to contact their veterinarian immediately in the event of signs of adverse effects.

Gabapentin and Amantadine for Chronic Pain: Is Your Dose Right?