Moxidectin is available in oral, topical, and injectable formulations with options labeled for different species.

Moxidectin is a member of the milbemycin subfamily of macrocyclic lactones and was first approved by the Food and Drug Administration (FDA) in 1997. It is now available in a variety of preparations and dosages for use in dogs, cats, ferrets, sheep, cattle, and horses.

Moxidectin is indicated for the prevention of heartworm disease caused by Dirofilaria immitis and for the treatment and control of intestinal parasites such as hookworms (Ancylostoma caninum, Uncinaria stenocephala) and roundworms (Toxocara cati, Toxascaris leonina).1 Additionally, moxidectin can be found in combination products with other therapies to treat fleas and repel ticks. TABLE 1 lists all FDA-approved products containing moxidectin. Although several options are available for all listed species, this article focuses on moxidectin products for dogs. 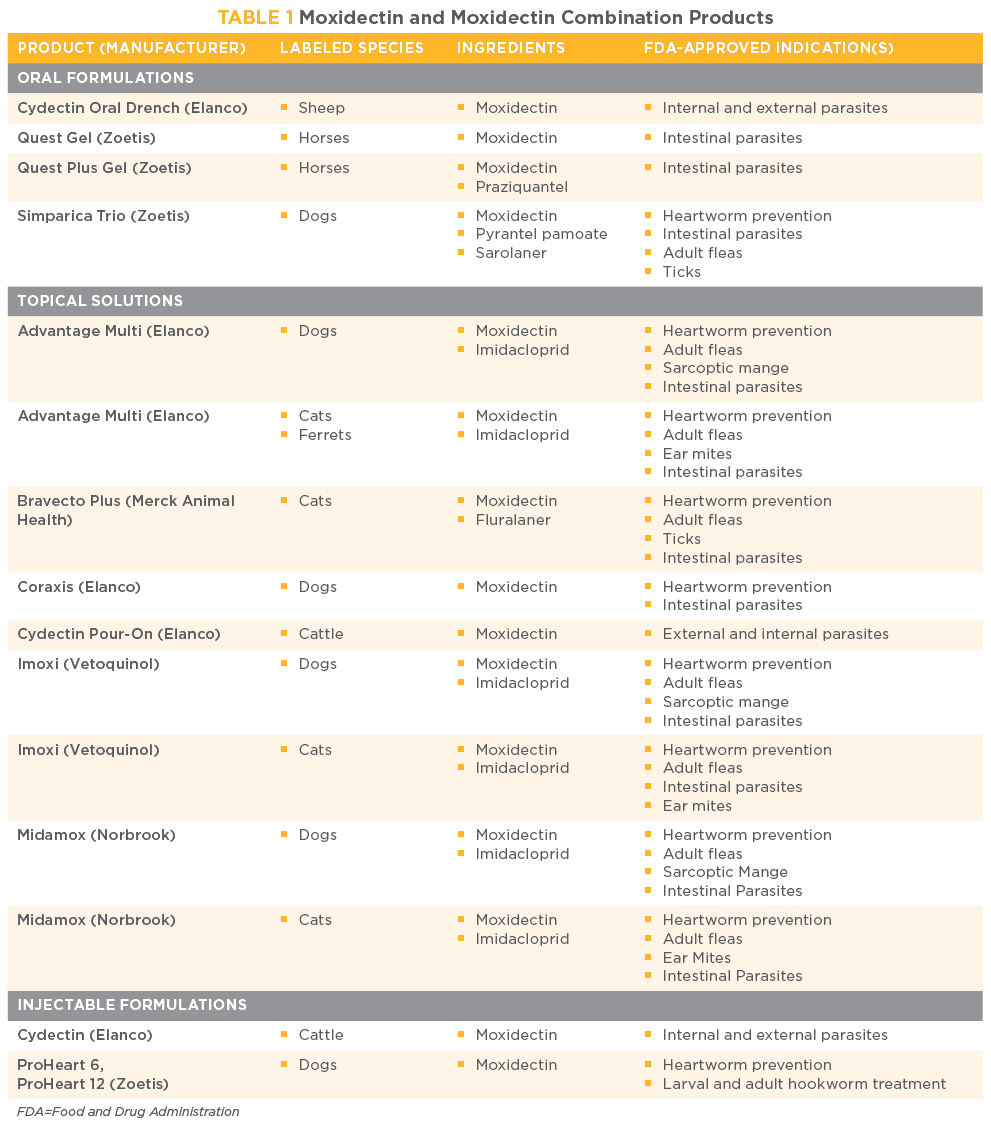 Evidence of Efficacy for Moxidectin

An injectable moxidectin microsphere formulation (ProHeart 12; Zoetis, zoetisus.com) was shown to be 100% effective in the prevention of development of D immitis in dogs that were inoculated with infective larvae 365 days after receiving a dose of 0.5 mg/kg.2,3

The oral moxidectin combination product used (Simparica Trio; Zoetis, zoetisus.com) was shown to be similarly effective, with 100% prevention of development of adult D immitis in dogs inoculated 30 days prior to treatment.4

Moxidectin products also show high levels of efficacy for the treatment of intestinal parasites, including roundworms (adult Toxocara canis and adult T leonina) and hookworms (L4, immature adult, and adult A caninum and adult U stenocephala).2-4,6,7

Mechanism of Action for Moxidectin

Moxidectin is an endectocide that works by interfering with ligand-gated chloride channel–mediated neurotransmission in parasitic nematodes and arthropods by increasing the permeability of invertebrate cell membranes to chloride ions. This effect causes paralysis and death of the parasite.1,8 As with other drugs in the milbemycin class, moxidectin is generally safe for use in mammals due to its weak affinity for glutamate-gated chloride channels and limited ability to readily cross the blood–brain barrier.8

Pharmacokinetic parameters of moxidectin products are, of course, dependent on the route of administration. Injectable canine formulations (ProHeart 6, ProHeart 12; Zoetis, zoetisus.com) reach peak serum concentrations about 7 to 14 days after administration. Due to its lipophilicity, the volume of distribution and, therefore, half-life of moxidectin are very long compared with other macrocyclic lactones. However, the longer, terminal-phase half-life noted in these products—despite negligible serum concentrations remaining at 6 months and 12 months after administration, respectively—can also be attributed to their microsphere formulation, resulting in prolonged efficacy.3,4

Topical canine moxidectin products have somewhat similar pharmacokinetics. When applied topically, moxidectin is systemically absorbed and reaches peak serum levels 1 to 21 days after administration. Pharmacokinetic studies in dogs have demonstrated a terminal half-life of about 342 hours.9

Finally, when administered orally at much lower doses, moxidectin’s time to peak plasma concentration is about 2.4 hours and its elimination half-life is about 11 days. Moxidectin has an oral bioavailability of 67% and is excreted unchanged in bile.4

It is recommended to consult individual product labels regarding restrictions such as shampooing and water immersion when using topical formulations of moxidectin. Dosing and administration considerations for individual products can be found in TABLE 2. 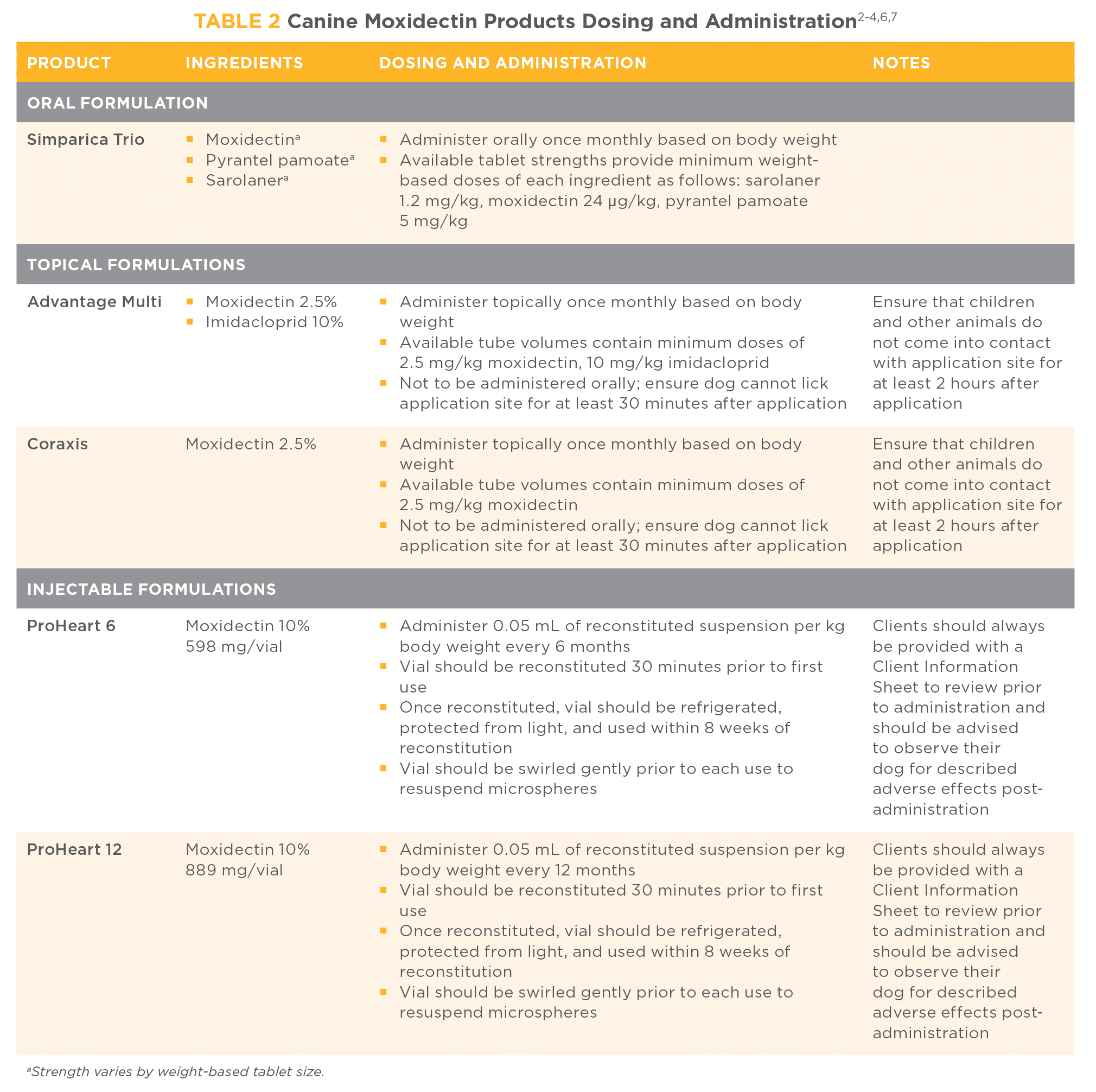 The injectable formulation of moxidectin, ProHeart, was first approved by the FDA in 1997. However, this product was voluntarily recalled in 2004 at the request of the FDA due to reported adverse effects such as anaphylaxis, hepatic impairment, convulsions, and death. Investigations found that these events were associated with solvent contamination.10 ProHeart 6 was reintroduced to the market in 2013, and ProHeart 12 was approved in 2019.

Both products are available with restrictions that require veterinarians to complete a Risk Mitigation Action Plan (RiskMAP) training program before they are approved by Zoetis to acquire either product and administer it.2,3 The purpose of this program is to provide training necessary for veterinarians to safely use these drugs and avoid risks involved. The required certification covers client education (including a Client Information Sheet that must be provided when administered), indication, patient selection, administration technique, cautions and contraindications, and instructions for adverse event reporting. Veterinarians must complete the training, verify understanding, and become registered with Zoetis to obtain either drug.

Approval studies found that vomiting, lethargy, and diarrhea were the most common adverse effects reported after ProHeart administration, but these did not occur more often in the treatment group than in an active control group on an oral monthly heartworm preventive. However, 2 dogs treated with ProHeart 12 experienced anaphylaxis within 24 hours of administration and were managed with symptomatic care. Postapproval reports have included the following adverse events: anaphylaxis, immune-mediated hemolytic anemia, vomiting and diarrhea (with or without the presence of blood), lethargy, anorexia, fever, weight loss, injection site reactions, seizures, ataxia, hematological abnormalities, dyspnea or tachypnea, elevated liver enzymes and hepatic abnormalities, elevated blood urea nitrogen and creatinine, polydipsia, and polyuria. Efficacy studies suggest adverse effects are more likely to be severe in heartworm-infected dogs.2,3

Owing to the risk of adverse effects, a thorough medical history, a physical examination, and diagnostic testing should be completed to determine the overall health of the patient. ProHeart 6 and ProHeart 12 should be used cautiously in dogs with a history of allergic conditions and should not be used in sick, debilitated, or underweight dogs or dogs that have a history of weight loss.2,3

Topical administration of moxidectin is generally considered to be well tolerated with minimal side effects. However, adverse effects may include irritation of the skin at the application site. Residue with medicinal odor is often reported. Pruritus, lethargy, reduced appetite, and hyperactivity have been reported in rare cases.8

Oral moxidectin is available as a combination product that also contains sarolaner and pyrantel pamoate. It is well tolerated at labeled doses; vomiting (14.3%) and diarrhea (13.2%) were the most reported adverse effects associated with this product. Lethargy, anorexia, polyuria, hyperactivity, and polydipsia were also reported in descending frequency.4

As a drug class, macrocyclic lactones are implicated in toxicosis associated with the ABCB1 (ATP binding cassette subfamily B member 1) genetic polymorphism found in dogs, most commonly herding breeds. This polymorphism affects P-glycoprotein (P-gp) pumps, which function to extrude substrate drugs and are found in normal tissue barriers throughout the body. However, when drugs that are P-gp substrates are administered to dogs with the ABCB1 genetic polymorphism, they cause P-gp pump malfunction, particularly in the blood–brain barrier, and subsequent central nervous system (CNS) toxicosis.11 While moxidectin has been shown to be a weak P-gp substrate, this characteristic should be considered in affected patients.12

Reported toxicosis cases related to moxidectin exposure in canine patients have been due to ingestion of palatable, highly concentrated paste forms of the drug meant for use in equine patients. In 2007, a case report described a 10-month-old border collie that developed severe neurologic signs including seizure, coma, and respiratory failure after ingestion of an unknown quantity of moxidectin equine dewormer. With supportive care, including intravenous fluids, activated charcoal, and mechanical ventilation, the patient fully recovered.13 While this patient’s breed would have been predisposed to ABCB1 polymorphisms resulting in severe neurotoxicity, ABCB1 genotyping results showed no mutation. A similar report in 2009 described a 3.2-kg Jack Russell terrier puppy that ingested an unknown quantity of 2% moxidectin gel labeled for use in horses. The patient developed acute-onset seizures and paralysis that were successfully treated with intravenous lipids.14

Labeled contraindications for all listed products include hypersensitivity to moxidectin or any other combined active ingredients.2-4,6,7 Topical products should not be given orally as this could result in neurologic signs such as depression, incoordination, pupil dilation, and muscle tremor. Additionally, care should be taken to avoid use of these products in cats.6,7 Finally, while contraindications for injectable products only include hypersensitivity to the drug, caution should be used when using these products in dogs with a history of allergic conditions, and they should not be used in sick, debilitated, or underweight dogs or dogs that have a history of weight loss.

Due to the risk of anaphylaxis and immune-mediated reactions, caution should be used when administering vaccines along with ProHeart 6 and ProHeart 12.2,3,8

In 2004, Paul et al. found that moxidectin/imidacloprid topical solution was safe for use at doses up to 5 times the recommended dose even in ivermectin-sensitive collies. These findings are consistent with product labeling indicating safe use at recommended doses when used as directed for oral, injectable, and topical canine formulations. Risk of neurologic toxicity in this patient population increases when these formulations are used concurrently with other P-gp substrates.8,15

Editor’s Note: This article was updated on July 11, 2022 to include “Ticks” as an FDA-approved indication for Simparica Trio in Table 1.

Selamectin Use in Companion Animals

Sarolaner Use in Dogs