Welcome to Practical Toxicology, brought to you in partnership between Today’s Veterinary Practice and the ASPCA Animal Poison Control Center (APCC) (www.aspcapro.org/poison). This column provides practical clinical information about diagnosing and treating pets that have been exposed to potentially harmful substances.

Exposures to this toxin present a unique challenge to clinicians. Once signs of convulsant syndrome—a neurologic syndrome caused by bromethalin toxicosis—have developed, prognosis for recovery is poor.3,4 Therefore, most clinicians seem aware that prompt and aggressive decontamination measures must be taken. However, if decontamination is too aggressive, iatrogenic hypernatremia can develop, and clinical hypernatremia can be just as life-threatening as a large bromethalin exposure.

To further complicate matters, clinical signs of hypernatremia can appear similar to the neurologic signs caused by bromethalin.5 If clinicians are not aware of, or monitoring for, a significant rise in the patient’s serum sodium level, hypernatremia may be mistaken for bromethalin toxicosis, resulting in incorrect treatment being instituted, which can worsen the patient’s prognosis.

This article provides guidance on how to treat patients with bromethalin exposure, while taking these challenges into consideration.

Evaluation of the box label suggests that it once held 12 rodenticide bait blocks, each weighing 1 ounce. The box now contains 5 blocks plus the portion of the block the owner recovered from the dog’s mouth, which appears to be no larger than one quarter of a block. The label on the box says the active ingredient is 0.01% bromethalin.

After evaluating patient history and the rodenticide itself, the dosage of bromethalin ingested needs to be calculated.

Based on patient history, it can be determined that Dusty was exposed to up to 6.75 ounces of the rodenticide (12−5.25 = 6.75 blocks). This is the worst-case scenario: the largest amount of bait that Dusty may have ingested is the missing portion of the block he was discovered carrying plus the missing blocks from the box.

To calculate the dosage ingested, the concentration of bromethalin in the bait needs to be determined.

Using a concentration of 0.01%, the potential dosage ingested by Dusty can then be calculated:

What does this mean? Is this a concerning exposure and, if so, how concerning? How aggressive does decontamination need to be? To answer these questions, the kinetics and toxicity of bromethalin need to be discussed.

Bromethalin’s metabolite, desmethyl bromethalin, is primarily responsible for the uncoupling of oxidative phosphorylation in neuronal mitochondria.4 This results in a depletion of adenosine triphosphate from the cell, causing impairment of the sodium potassium pump.

When pump function is poor, sodium and fluid accumulate within the myelin sheaths. This edema accounts for the neurologic signs seen with bromethalin ingestion. Because the edema is within the myelin, this may also explain why traditional medical management of central nervous system edema, such as administration of diuretics and mannitol, has limited success.3

Bromethalin is excreted primarily through the bile, and it is suspected to undergo enterohepatic recycling because experimental studies have shown that multiple doses of activated charcoal are more effective at preventing the neurologic syndrome rather than a single dose.4

The clinical presentation of bromethalin toxicosis is dose dependent.

At lower exposure dosages (below the 50% lethal dose [LD50] of 3.65 mg/kg for dogs), a paralytic syndrome can develop, typically within 24 to 86 hours after exposure. This syndrome can cause hindlimb paresis and ataxia, and patients may recover from these signs over a period of weeks to months.

The signs of paralytic syndrome may progress, with development of absent deep pain sensation, upper motor neuron bladder paralysis, central nervous system depression, tremors, hyperesthesia, seizures, and death.1,4 This convulsant syndrome is usually, but not always, associated with larger exposures to bromethalin (above the LD50), and signs typically develop within 4 to 36 hours after ingestion.1,6,7

Cats demonstrate a similar clinical course to dogs, but are much more sensitive to bromethalin. The LD50 in cats is 0.54 mg/kg.4 Cats may also demonstrate ileus and resultant abdominal distention.1,5

The dosages cited for dogs and cats are medians, and any individual patient may be more sensitive to the effects of bromethalin.

It also appears that dogs younger than 1 year of age may be more susceptible to the effects of bromethalin, which may be due to the immature blood–brain barrier in juveniles.

Based on the kinetics and toxicity of bromethalin, clinicians must take a conservative approach when deciding at what dosage to begin decontamination efforts and how aggressively to decontaminate. In addition, the time that has elapsed between exposure and decontamination must be taken into account (Table). 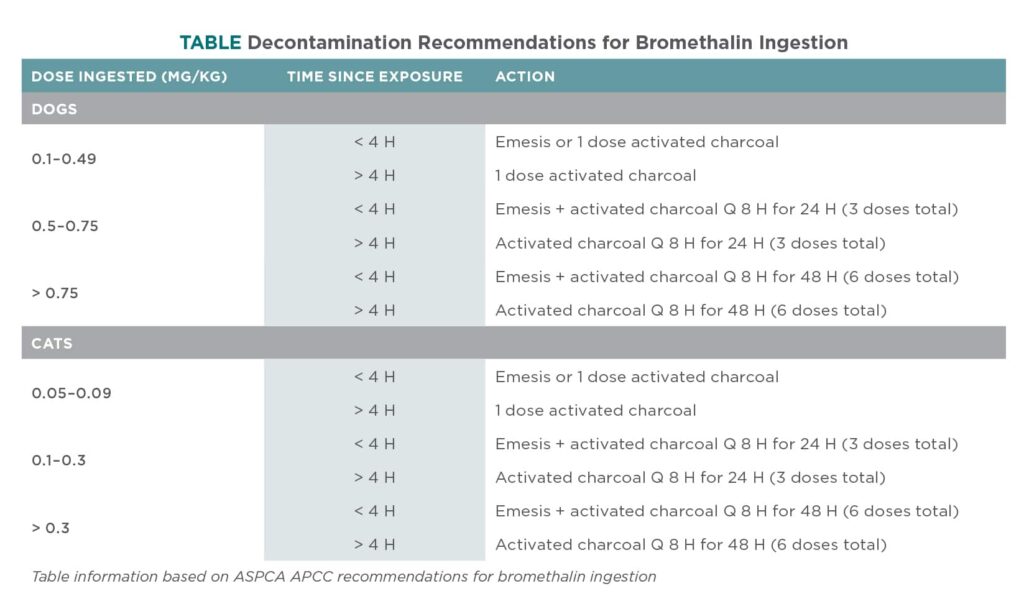 Alternative decontamination measures have been proposed and tried, yet no published evidence supports a recommendation for their clinical use at this time. The following measures are not recommended as the standard of care for bromethalin exposures.

Bromethalin is very lipophilic; therefore, in theory, intralipid emulsion therapy has the potential to reduce bromethalin concentrations in the body.9 If this therapy is to benefit the patient at all, it would likely be within the first several hours after an exposure because bromethalin is rapidly absorbed (peak plasma concentrations occur in 4 hours in rats).1,4 Reversal of the neurologic syndrome by intralipid emulsion is unlikely once the neurons are damaged. There is no solid evidence to support the routine use of intralipid therapy for bromethalin exposures at this time.

Cholestyramine is an indigestible ion exchange resin that has been successfully used for decontamination with other agents that undergo extensive enterohepatic recirculation, such as cholecalciferol and certain nonsteroidal anti-inflammatory drugs.10-13 Cholestyramine binds with bile acids in the intestine, preventing their reabsorption and producing an insoluble complex that is excreted in the feces.14 It is unknown at this time whether cholestyramine can be used successfully for bromethalin decontamination.

Prior to decontamination with activated charcoal, consider administering an antiemetic. This may help reduce the risk for aspiration secondary to vomiting, as well as treat any nausea, which may encourage the patient to drink water.

The first dose of activated charcoal should be the largest dose (1 to 2 g/kg)2 and, ideally, contain a cathartic agent, such as sorbitol, unless the patient already has diarrhea. Subsequent doses should be half the original dose, with no cathartic included. If there is no evidence of charcoal in the rectum within 8 hours after the first dose, consider administering a warm water enema.6

To summarize the information known about Dusty’s exposure, he was exposed to bromethalin while carrying the rodenticide block (< 4 H) and his worst-case-scenario exposure dosage is 0.9 mg/kg bromethalin. The Table recommends:

Because exposure may have taken place as early as the previous evening, it is important to perform a rectal examination and/or to evaluate the feces. If the feces are the color of the bait, a gentle warm water enema (5–10 mL/kg) to help decontaminate the colon is recommended.

Dusty is admitted to the hospital, and emesis is induced with apomorphine (0.04 mg/kg IV). A few small pieces of green material, suspected to be the bait, are seen in the vomitus. He is administered maropitant (1 mg/kg SC) as well as lactated Ringer’s solution IV at 1.5 times the maintenance rate of 60 mL/kg/day.

Dusty then receives 230 mL of 10% activated charcoal with sorbitol. His baseline sodium is 146 mmol/L. Seven hours after this treatment, Dusty’s sodium level is 151 mmol/L (mEq/L); his fluid rate is increased to 2 times the maintenance rate and he is given an enema.

One hour later, his serum sodium decreases to 148 mmol/L. Dusty is administered 115 mL of 10% activated charcoal without sorbitol. The remaining doses of charcoal are administered without complication.

Dusty is discharged from the hospital 54 hours after admission without developing signs of bromethalin toxicosis.

Renee Tourdot, DVM, is a consulting veterinarian in clinical toxicology with the ASPCA Animal Poison Control Center (APCC).  Dr. Tourdot received her DVM from University of Wisconsin–Madison and completed an internship in small animal medicine and surgery at Coral Springs Animal Hospital in Coral Springs, Florida. Dr. Tourdot practiced emergency medicine and surgery at Wisconsin Veterinary Referral Center before joining the APCC in 2015.