This is the fourth article in our Imaging Essentials series, which is focused on providing comprehensive information on radiography of specific areas of dogs and/or cats. The first 3 articles are available at todaysveterinarypractice.com:

Stifle radiographs are routinely needed in cases of trauma and lameness associated with common stifle joint abnormalities including:

High-quality, correctly positioned radiographs are required in order to provide accurate assessment of the osseous and soft tissue structures of the stifle joint. This becomes even more critical when corrective osteotomies that alter joint alignment (tibial plateau leveling osteotomy or tibial tuberosity advancement) are performed.

The standard of care in small animal veterinary medicine for stifle radiographic series should include straight mediolateral and caudocranial views. Following a consistent, repeatable technique for obtaining stifle radiographs helps optimize the quality of the images.

The stifle joint is one of the most common orthopedic radiographic studies. In addition to discussing new radiographic techniques for evaluation of dogs with stifle disease, this article also covers stifle anatomy, radiographic positioning, image formation, and quality control.

The components of the stifle joint (Figure 1) include the: 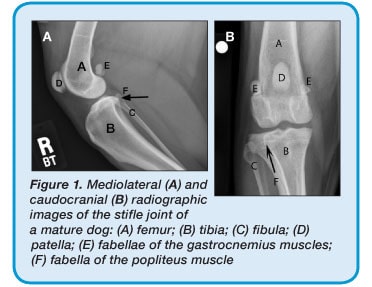 The fibular head forms a fibrous connective tissue joint with the proximal aspect of the lateral proximal tibia. The fibula is a lateral anatomic structure and the tibia is located in a medial anatomic position.

The lateral fabella (sesamoid) of the origin of the head of the gastrocnemius muscle is elongated in a proximal to distal direction compared with the medial fabella. Both fabellae are located at the proximal, caudal margin of the femoral condyles. The popliteal sesamoid is located along the medial aspect of the caudal proximal margin of the tibial condyle.

To set the technique for a lateral projection, measure the stifle at the level of the femoral condyles in the medial to lateral plane. For the caudal to cranial stifle projection, measure the level of the distal femur in the caudal to cranial plane. The cranial caudal measurement will be larger than the medial lateral measurement for most dogs and cats.

Routine Views of the Stifle Joint

Positioning
For a mediolateral image of the right or left stifle joint, the patient is positioned on the table in lateral recumbency with the side to be radiographed closest to the table and marked with a lead marker in the collimated area as right (R) or left (L). This radiopaque marker is placed along the cranial aspect of the limb and should not be superimposed over any anatomic structure (Figure 2). 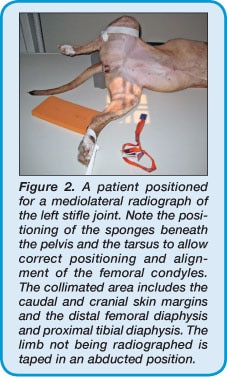 Caudal to Cranial or Cranial to Caudal Images

Positioning
For the orthogonal view, the stifle should be imaged in a caudal to cranial or cranial to caudal direction. The caudal to cranial projection will place the stifle joint nearest to the radiographic cassette or digital detector, reducing image magnification and potential geometric distortion.

A vertical or horizontal beam radiograph can be made; however, the ability to take horizontal beam images will be constrained by the machine being used. In all cases, the radiopaque ID marker (R or L) should be placed along the lateral aspect of the stifle joint, avoiding superimposition over any structures being radiographed. 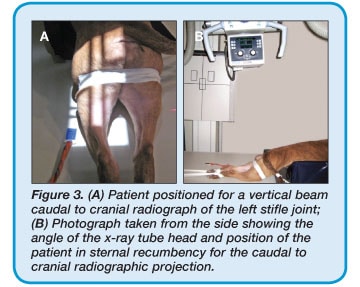 2. Vertical Beam Positioning: Cranial to Caudal Technique
NOTE: This positioning results in the greatest degree of magnification and geometric distortion due to the distance between the stifle joint and the cassette/detector.

3. Horizontal Beam Positioning: Caudal to Cranial Technique (Figures 4A and 4B) 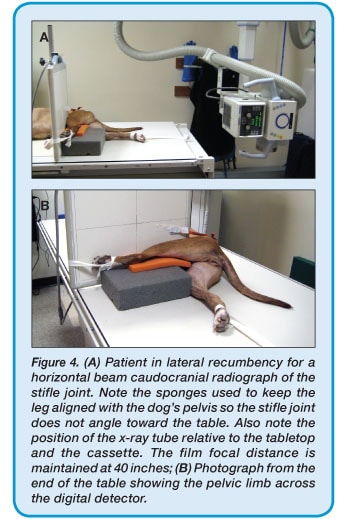 Collimation
For the ventrally recumbent patient (Figure 3), palpate the femoral epicondyles at the level of the stifle joint and place the center (cross hairs) of the collimator light at this point.

For the laterally recumbent patient (Figure 4), the x-ray tube head is rotated 90 degrees, positioning it parallel with the tabletop and perpendicular to the pelvic limb being radiographed.

For quality control of any diagnostic image, remember the following 3-step approach:

The tibial plateau leveling osteotomy (TPLO) lateral is a special projection. Its purpose is to position the proximal tibia where the proximal tibial joint surface is highlighted. This allows the surgeon to consistently and repeatedly determine joint orientation in order to quantitate the tibial slope. This assessment is then used to plan the osteotomy that will be performed during surgery (Figure 5). 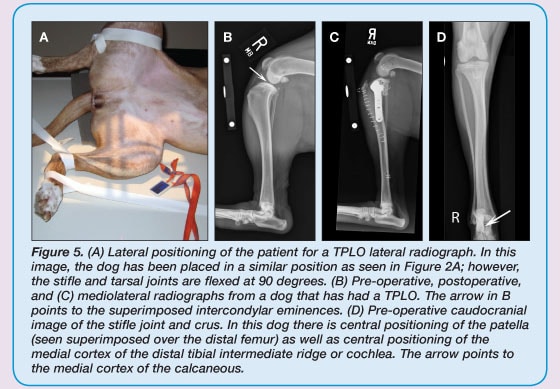 The tibial tuberosity advancement (TTA) procedure is also used for the surgical repair of cranial cruciate ligament rupture. The mediolateral radiograph projection for the TTA differs from the TPLO mediolateral projection in that the femur and tibia are not flexed but remain in a more natural extended position (Figure 6). 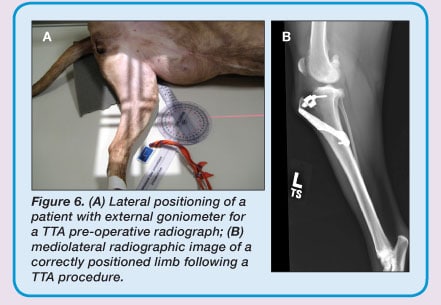 Skyline of the Patella

The skyline patella radiographic projection is used to better visualize the patella and trochlear groove (Figure 7). This view is typically used in cases of medial or lateral luxating patella. As with the caudocranial view of the stifle, there are two approaches to positioning based on a horizontal or vertical position of the x-ray tube. 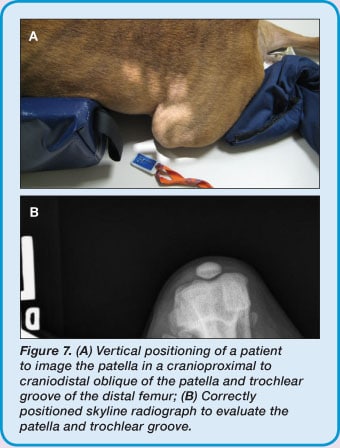 Due to varying thickness of the limb, keep the collimation of the skyline FOV of the patella to as small an area as possible, which reduces secondary radiation.

Although not required, sedation is recommended for any orthopedic radiographic study as it allows the patient to relax, thereby allowing easier positioning (particularly extension for cranial caudal images). In addition, sedation also decreases the amount of time required for repositioning due to lack of patient cooperation. For animals with painful joints, a neuroleptanalgesic protocol provides both sedation and pain control.