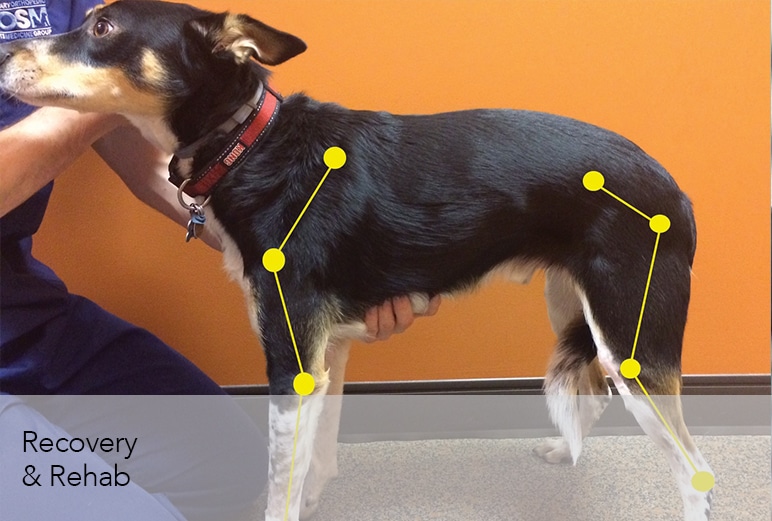 New validated objective gait analysis technologies have become available to help veterinarians quantitate characteristics of gait, which can greatly assist in the detection of a subtle lameness as well as response to various treatments.
17
17
Shares

Understanding canine locomotion and gait is imperative to diagnosing numerous musculoskeletal and neurologic conditions. Prior to any orthopedic or neurologic examination, a gait evaluation should be performed.

Gait evaluation typically includes visual and/or subjective observation of the dog from a number of angles at both the walk and trot on a flat surface. To the trained eye, lameness can often be detected upon gait evaluation. However, a more subtle lameness may not be apparent on subjective gait evaluation and can be difficult to detect.

Recently, new validated objective gait analysis technologies have become available to help veterinarians quantitate characteristics of gait, which can greatly assist in the detection of a subtle lameness as well as response to various treatments.

Prior to detecting abnormalities in gait, one must understand normal canine locomotion. In dogs, there are 4 main gaits: walk, trot, canter, and gallop (Table 1). 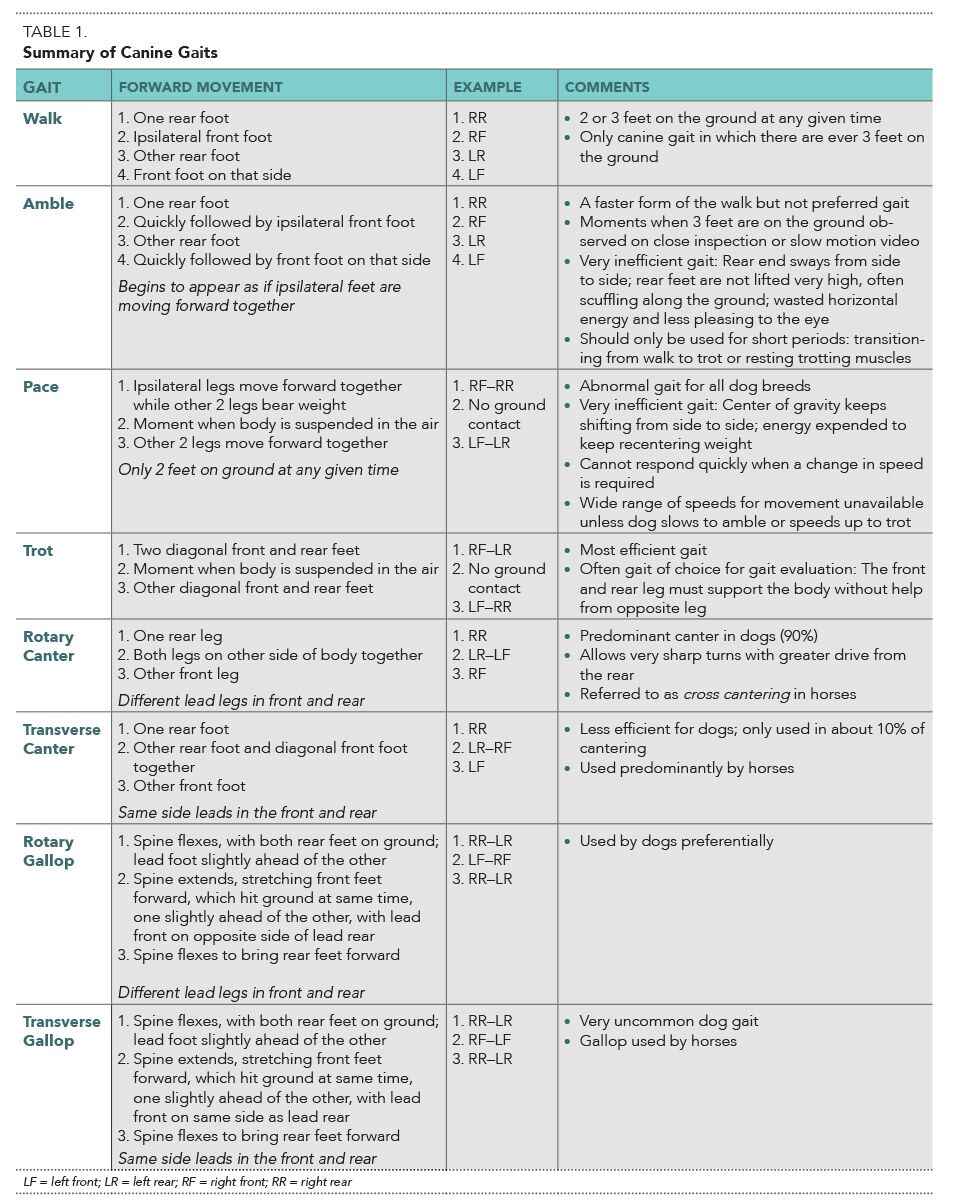 In addition, dogs have a transitional gait between the walk and the trot called the amble. There also is a relatively common, but abnormal, gait in dogs called the pace, which is a normal gait for some breeds of horses.1

Key considerations when evaluating gait include:

While the walk is often the easiest gait in which to observe abnormalities because it is the slowest gait, a mild lameness may not be detectable. The trot is the best gait to use for detecting lameness as it is the only gait in which the forelimbs and hindlimbs never receive assistance from the contralateral limb in bearing weight.

Generally, with forelimb lameness, weight is shifted caudally, and the head goes “down on the sound” limb or, conversely, the head goes up when the lame limb is on the ground (although this observation has not been verified in dogs). In forelimb lameness, the hindlimbs may also appear tucked under and the back appear arched, and affected dogs may take short strides with the hindlimbs.

Dogs with a shoulder lameness tend to appear short strided, while dogs with an elbow lameness (eg, medial compartment disease) appear to circumduct the limb to ease pressure on the medial aspect of the elbow.

On the contrary, with hindlimb lameness, weight is shifted cranially. The forelimbs may be placed more caudally, with the head and neck extended and lowered to help offset weight from the hind end. A “hip hike”—in which the hip on the lame side has increased vertical motion, making the hip on the unaffected side appear lower when observing the gait from behind—is often noted on the same side as the lameness. The tail may also rise as the lame leg contacts the ground.

It is imperative to have a means for objective gait analysis because gait is difficult to consistently and reliably assess subjectively. Objective analysis is especially important when developing treatment plans and monitoring patient progress. Numerous methods for gait analysis have been developed (Table 2). 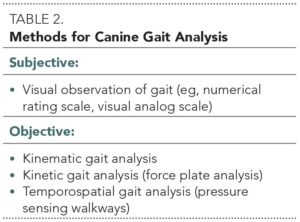 A systematic and disciplined approach must be used to clinically evaluate a patient’s gait. To document this clinical evaluation in the medical record, findings are often semiquantified using a numerical rating scale (Table 3) or visual analog scale (Figure 1). 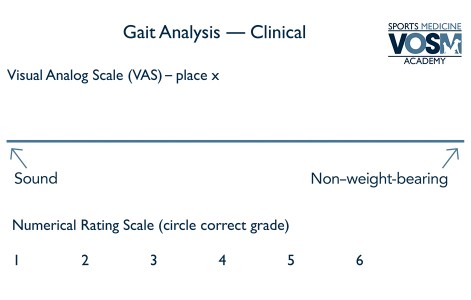 FIGURE 1. Example of the visual analog scale (VAS): The animal is graded on a 10-cm line, with one end of the line representing “sound” and the other end representing “non–weight-bearing.” An “X” is placed along the scale, noting the degree of lameness, and then the VAS can be placed into the patient’s record. Either the veterinarian or a trained staff member typically completes the VAS. Previous VASs can be compared to determine if there is improvement, decline, or no change.

Both types of scales were developed to provide a systematic approach to visual observation of gait. However, it is important to realize that, while visual or subjective gait analysis is often helpful in identifying lameness, the gold standard for quantifying lameness is quantification of gait characteristics with a form of objective gait analysis, such as force plate analysis.

Evans and colleagues compared visual observation of gait to force plate analysis.2 This study evaluated 148 Labrador retrievers—131 that were 6 months post surgery for unilateral cranial cruciate ligament injury and 17 that were free of orthopedic disease. The observer only identified 11% of the 131 dogs that were 6 months post surgery as being abnormal compared with force plate analysis, which revealed that 75% of the 131 dogs failed to achieve ground reaction forces consistent with sound Labrador retrievers.

visit tvpjournal.com and select Clinical Resources to download the numerical rating scale and visual analog scale described in this article. The scales have been kindly provided by Veterinary Orthopedic & Sports Medicine Group. 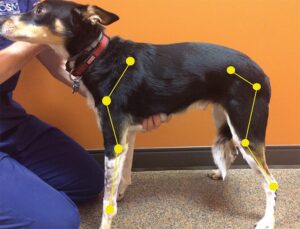 FIGURE 2. Example of how reflective markers would be placed for a patient undergoing kinematic gait analysis.

A few of the most common locations for markers include the dorsal scapular spine, acromion/greater tubercle, lateral humeral epicondyle, ulnar styloid process, iliac crest, femoral greater trochanter, femorotibial joint, lateral malleolus of the distal tibia, and spinous process at T13. Typically, markers are attached by shaving and cleaning the skin with alcohol; then pressing the marker’s adhesive back directly to the skin. The marker can be further secured with tape, if needed.

When the dog is in gait, the movement of the markers is tracked by a series of cameras. The locations of the markers over time are then used to create a 2- or 3-D model of the dog’s gait with calculations of bone and joint excursions.

Kinematic parameters include displacements, angular velocities, and range of motion3:

While a multitude of information can be gathered from this form of gait analysis, one major limitation is the variation of structures between breeds, as well as within breeds.3 Further limitations include the potential for skin movement, and accuracy and repeatability of marker placement.

Kinetic gait analysis measures the ground reaction forces that are the result of an individual’s step.

The most commonly used method for kinetic gait analysis is force plate analysis, in which metal plates are mounted on the floor or walkway (Figure 3) to measure ground reaction forces (Table 4 and Figure 4). The forces are measured in 3 dimensions: vertical, craniocaudal, and mediolateral. 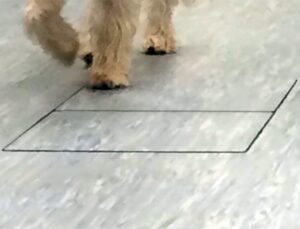 FIGURE 3. A force plate walkway; note the gray square in the center of the mat—this is the force plate that the dog must step on during the analysis. 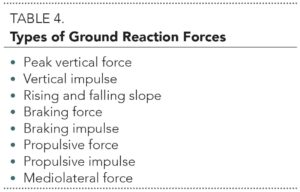 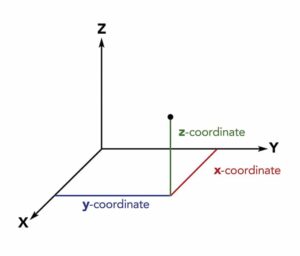 FIGURE 4. Diagram showing the forces measured during force plate analysis: The forces in the Z direction are generated by a vertical compression, which results in larger forces than those in the X or Y direction. Because of this, most veterinary publications derive and use the peak vertical force from the Z direction. Courtesy en.wiktionary.org

While braking, propulsion, and mediolateral forces may be useful in evaluating mechanisms of locomotion, they are not commonly used for diagnostic purposes or to assess outcome.4

Force plate measurements have been the most widely used and validated quantitative gait application in veterinary medicine to date.3 Thus, force plate analysis is considered the optimum approach to quantification of gait characteristics by objective gait analysis.

However, there are disadvantages to force plate analysis. Limitations include:

Tips for Obtaining an Acceptable Recording on a Pressure Sensing Walkway

Pressure sensing walkways have been validated to analyze normal and abnormal gaits in dogs.6-13 Having this information aids in diagnosing orthopedic, muscular, and neurologic disorders that affect gait. These measures provide novel information about temporal and spatial gait characteristics (Figure 5). 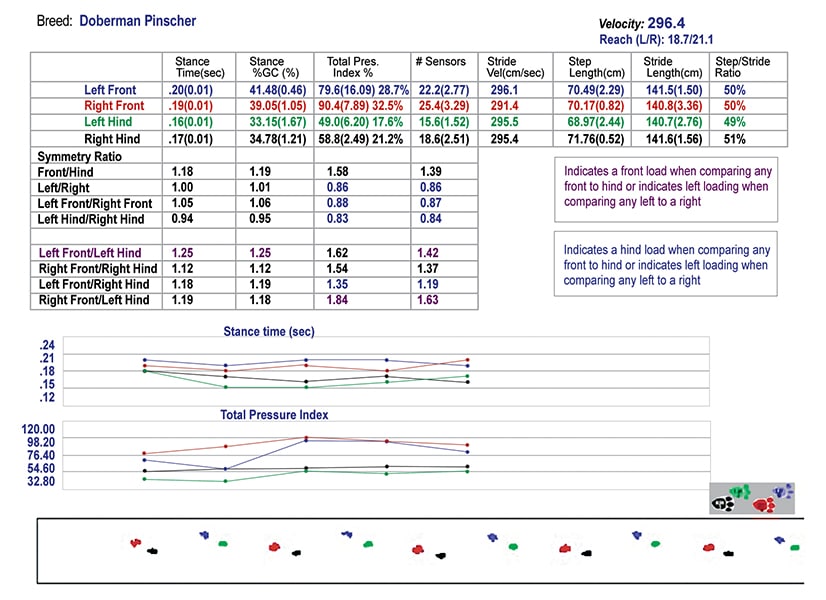 FIGURE 5. Results from temporospatial gait analysis using a pressure sensing walkway in a patient with a left cranial cruciate ligament rupture. Dogs carry about 60% of body weight on their forelimbs and 40% of body weight on their hindlimbs. Thus, the total pressure index percentage should be 30% in each forelimb and 20% in each hindlimb. This patient is placing 17% on the left hindlimb and 21% on the right hindlimb.

The portable pressure walkway system was originally developed for use in the human medical field9,14,15 and has since been adapted and validated for use in veterinary medicine. Previous studies have established a protocol for temporal–spatial analysis and determined reference values and symmetry ratios for various breeds.6-11 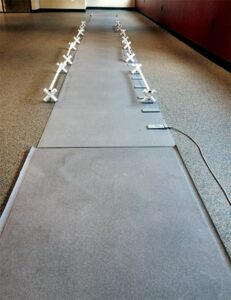 FIGURE 6. A temporospatial gait analysis system; note the series of sensors on the right side of the mat that are used to record each foot strike to calculate velocity, stance time, swing time, stride length, step length, and total pressure index. The sensors are connected to a computer (not pictured) with software to allow the gait to be analyzed.

Forces exerted to change speed, change direction, or maintain balance can interfere and complicate measurement interpretation.12,16 The pressure sensing walkway does not measure force directly but does measure the influence of these forces. Therefore, by limiting excess external influences, the measurements may be more representative of the dog’s true gait.

As with any other gait analysis system, there are advantages and disadvantages to using a pressure sensing walkway. Advantages include:

However, just as with every other system, there are disadvantages, including:

With more dogs participating in activities with their owners, canine sports, or a working role, it is essential for owners and veterinarians to understand canine gait. Early signs of lameness may be as subtle as a shortened stride or shorter stance time on the injured leg. Both subjective and objective gait analyses are important to not only establish a diagnosis but also monitor progression of treatment.