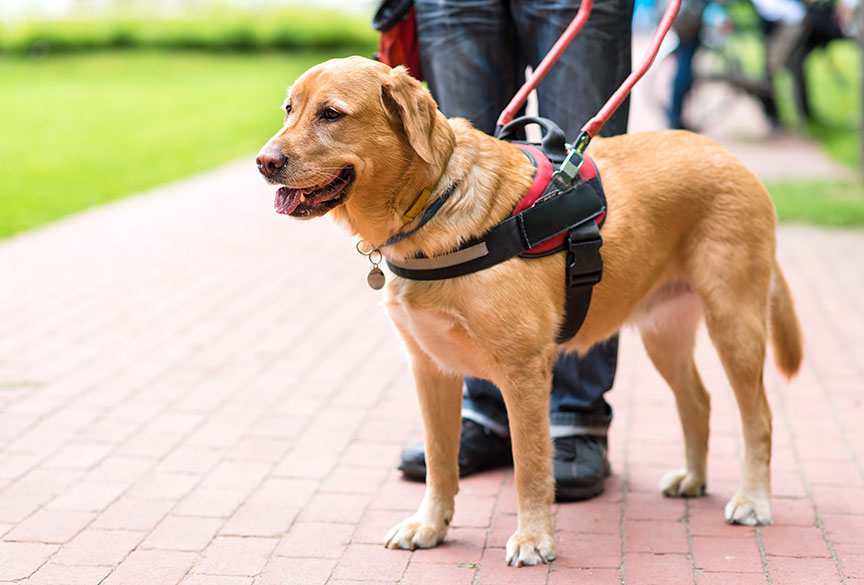 “Our initial study of 141 veterans with PTSD demonstrated that those with a service dog exhibited significantly lower PTSD symptoms and depression than those on the wait list without service dogs,” says one of the study‘s co-authors. Photo Credit: Shutterstock.com
784
784
Shares

Overall symptoms of post-traumatic stress disorder (PTSD) are lower among war veterans with service dogs, a preliminary study led by researchers in the Purdue University College of Veterinary Medicine has found. The pilot study was co-funded by the Human Animal Bond Research Institute (HABRI) and Bayer Animal Health.

“We found that the group of veterans with service dogs had significantly lower levels of PTSD symptomology than those who did not have a service dog,” Maggie O’Haire, assistant professor of human-animal interaction, says. “They also had lower levels of depression, lower anxiety and increased social participation, meaning a willingness to leave their house and go engage with society in different activities.”

The study is published in the February issue of the Journal of Consulting and Clinical Psychology.

The study was led by O’Haire with the help of K9s For Warriors, an accredited nonprofit organization that provides veterans with service dogs. The pilot research project provides scientific evidence of mental health benefits experienced by veterans with PTSD who have service dogs.

The Benefits of a Service Dog for Those with PTSD

Measurements of various aspects of PTSD symptoms, quality of life, social functioning and work were analyzed and compared between the two groups. Results reveal that veterans suffering from PTSD exhibited better mental health and well-being on several measures if they had a service dog, including:

“I have always been fascinated by the bonds that some people have with their companion animals,” says O’Haire. “I began studying service dogs for veterans with PTSD based on a strong need for more science. Despite large numbers of struggling veterans and long wait lists for service dogs, the area has historically been understudied. I wanted to give veterans a voice through science to showcase the effects service dogs may have. Together with my team, we have investigated whether and how service dogs may help veterans with PTSD. The study applied rigorous research methodology to an area that has historically been characterized by a reliance on anecdotal accounts and intuition rather than evidence-based science.”

Kerri Rodriguez, human-animal interaction graduate student in the College of Veterinary Medicine, was co-author of the study.

“The results have important implications for understanding the specific areas of life that a PTSD service dog may help improve,” says Rodriguez. “As the number of service dogs given to veterans with PTSD continues to increase, this is an important first step towards proof of concept that service dogs can actually provide measurable, clinical changes for veterans.” O’Haire and Rodriguez also say that service dogs did not replace evidence-based treatment for PTSD, nor did they cure it. While the veterans still had PTSD, they had significantly lower levels of symptoms.

“Our initial study of 141 veterans with PTSD demonstrated that those with a service dog exhibited significantly lower PTSD symptoms and depression than those on the wait list without service dogs,” says O’Haire. “They also reported greater quality of life and social participation. We were able to collect a physiological indicator of stress (salivary cortisol) in a subset of 73 military veterans with PTSD. In this group, those with a service dog showed a larger salivary cortisol awakening response, indicative of a pattern found in healthy adults without PTSD. They also showed lower anxiety, alcohol use, and sleep disturbance.”

“Pairing service dogs with our nation’s veterans should be recognized as a significant complementary method of treatment,” says HABRI Executive Director Steven Feldman. “The U.S. Department of Veterans Affairs has cited a lack of scientific research supporting service dogs for veterans with PTSD. This study is a significant step in providing scientific documentation, and I hope the promising results from this study will prompt a renewed focus on the benefits that service dogs provide.”

“Taken together, these findings demonstrate possible benefits for PTSD, but they are only the first step,” stresses O’Haire. “Service dogs do not appear to be a cure for PTSD, but may help ameliorate symptoms for some individuals.”

The research team will now move on to a National Institutes of Health-funded research project in which veterans with and without service dogs will be studied for an extended period of time. O’Haire says the valuable data from the pilot study helped secure the NIH R21 grant to conduct the large-scale, clinical trial to further investigate the efficacy and role of service dogs for military veterans with PTSD and their spouses.

“This new study will build on the findings from the preliminary study,” says O’Haire. “We plan to study 100 veterans — 50 with a service dog, 50 on the wait list.”