External and Middle Ear Disease in the Dog and Cat

Diseases of the external and middle ear are common problems in dogs and cats. Chronic otitis externa alone accounts for approximately 10% of admissions to small animal hospitals.1 Ear disease often goes unnoticed by the owner until the disease has progressed, become well established, and led to irreversible structural changes. Initial medical management may fail for a variety of reasons. Diseases of the external ear canal and middle ear are often related to more than one underlying problem. For these reasons and others, surgery may become the most effective recourse for treatment (Table 1).

Diseases of the ear are common problems in both the dog and cat. Chronic otitis externa alone accounts for approximately 10% of admissions to small animal hospitals.

CAUSES OF OTITIS EXTERNA AND MEDIA

Infectious, parasitic, and immune or allergic causes of ear disease, if recognized early and treated appropriately, can be managed without surgery. If appropriate medical management fails to cure or control the primary disease process or if a tumor is present, surgery can be an effective adjunct or primary therapy (Figure 1). 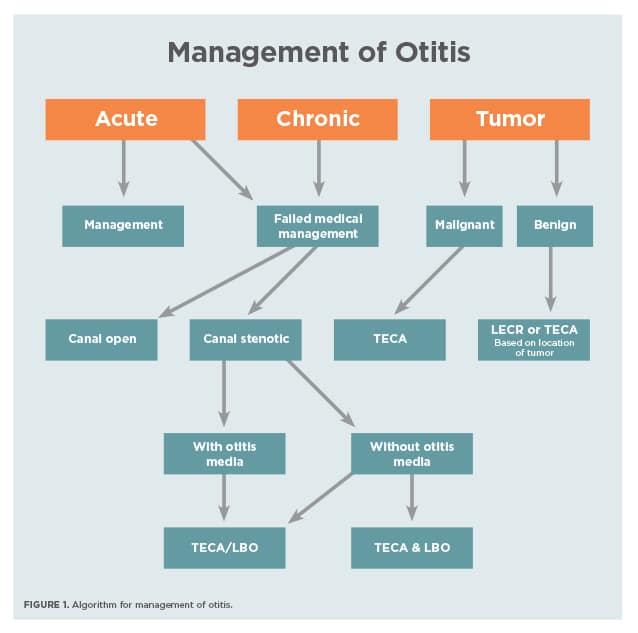 SURGICAL OPTIONS FOR THE EXTERNAL AND MIDDLE EAR

C.P. Zepp first described lateral ear canal resection (LECR) in 1949, and this surgical procedure is still often called a “Zepp.”6 LECR is used to treat chronic otitis before the vertical and horizontal canals become stenotic. It can also be used in resecting benign tumors involving the lateral wall of the vertical canal. The procedure involves removing the lateral half of the vertical ear canal and creating a drainage board for the horizontal ear canal. This creates an ear canal in a dog or cat that more closely resembles that of a person. When performed correctly, it allows better access to the horizontal canal for application of medication and allows discharge in the horizontal canal to drain without traversing up the vertical canal. If significant middle ear disease is also present, this procedure can be combined with ventral bulla osteotomy (VBO) to treat both the external and middle ear. With a narrowed external ear canal, LECR will not provide adequate drainage and the patient will continue to exhibit clinical signs. It is important to consider LECR early in the treatment of otitis. When treating a malignant tumor involving the ear canal, LECR has been shown to have an inferior outcome compared with total ear canal ablation.4

Total ear canal ablation (TECA) is considered a salvage procedure and is used to treat end-stage otitis externa and malignant tumors of the ear canal. End-stage ear disease occurs when stenosis of the ear canal is present with inflammation and fibrosis that prevents drainage of otic discharge from the horizontal canal to and out of the vertical canal.7 Chronic tissue change makes it impossible to get topical medication to the entire diseased canal and for discharge to exit the canal. In these cases, the surfaces of the vertical and horizontal canals often have ulcerations, and the auricular cartilage can be mineralized. Dogs with end-stage ear disease can no longer be treated medically and cannot be adequately treated by LECR. TECA is also recommended for treating malignant tumors of the ear canal because of the better outcome when compared with LECR.

TECA involves removing the entire external ear canal and should in all cases be combined with a lateral bulla osteotomy (LBO) or VBO. Patients who undergo bilateral TECA combined with LBO are essentially deaf.8 The complication rate associated with TECA ranges from 21% to 82%, with the most common complication being facial nerve paralysis.3,7,9

LBO can be used in conjunction with TECA to treat disease within the middle ear. LBO allows access to the middle ear so that exudate and necrotic epithelium can be removed and the middle ear can be adequately flushed. During this procedure, it is important to remove enough of the lateral ventral wall of the bulla to access the middle ear with a small curette. The external carotid artery and maxillary vein lie ventral to the bulla and must be protected when enlarging the osseous external acoustic meatus. A curette can first be used to remove the epithelium lining the meatus; then, a periosteal elevator can be used to remove soft tissue on the portion of the bulla that is to be removed. The elevator can then be used to gently retract the soft tissue and protect the artery and vein as the bone is removed with a rongeur or curette. In some cases, the bone can be exceptionally sclerotic, and it may be necessary to use a high-speed burr to remove this bone. If a burr is used, extreme caution is necessary to prevent the burr from contacting the soft tissues.

A bacterial culture sample of the bulla can be taken before curetting the cavity. This is likely to yield positive growth, possibly of more than one bacterium. Alternatively, the culture can be performed after the bulla has been curetted and flushed to detect any residual bacteria. Although a culture obtained this way is less likely to yield positive results, this approach may be more representative should complications arise after surgery. If the procedure is performed bilaterally, a culture sample should be taken from each bulla. If all necrotic debris present in the tympanic cavity is not removed, there is an increased risk for postoperative complications related to residual infection and possibly abscessation (Table 2). A soft rubber drain can be placed through a separate ventral incision into the bulla to allow for postoperative drainage. I find it useful to use magnification loops and a headlight to improve visualization of the cavity during this entire procedure.

VBO can be used in conjunction with TECA/LECR or as a singular procedure to treat disease confined to the bulla. When VBO is used in conjunction with TECA or LECR, the patient must be repositioned. One study comparing VBO and TECA versus LBO and TECA found no difference in outcome or complication rate; thus, combining LBO with TECA is usually recommended.10 Because LBO cannot be combined with LECR, VBO is necessary upon discovery that the bulla should be drained. The most common reason to perform VBO alone is removal of inflammatory polyps in cats. Of note, the tympanic bulla in cats is divided by a thin septum of bone that separates the bulla into dorsal lateral and ventral medial compartments. A small opening in the septum allows for communication between the compartments.

Ear disease, whether acute or chronic, can be debilitating and painful, causing not only clinical signs related directly to the ears but often lethargy and anorexia. Treatment of diseases of the ear canal and middle ear can be complex and complicated because these diseases are often multifactorial. The anatomy of the ear can also make visualization difficult and an accurate diagnosis challenging. Because the ear canal and middle ear are more or less hidden from view, any disease process can often be advanced when first recognized. If an early accurate diagnosis is not made and appropriate medical treatment started, structural changes to the canal and/or bulla will occur, further complicating medical management. Lack of patient and owner compliance can also lead to failure of medical management.

Surgery can play an important role in treating otitis externa and media and should be considered at each step of the way depending on the patient’s response to medical treatment. Tumors of the canal and bulla are almost always treated surgically. When there are anatomic changes to the canal and/or bulla, surgery can play an important role in treatment. As with any surgery, careful preoperative assessment of the patient is essential. Evaluating the extent of the disease, and potentially staging if malignancy is suspected, is central to a good outcome. A thorough understanding of the anatomy of the ear canal, bulla, and surrounding structures is imperative. Good surgical technique is important to diminish injury to vital blood vessels and nerves in the area; this will reduce the chance of both intraoperative and postoperative complications. 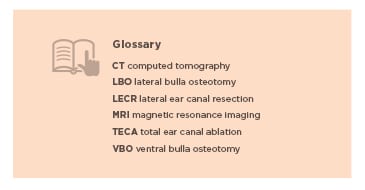 Mark Cofone, VMD, DACVS, is a staff surgeon and co-owner of the Veterinary Specialty Center of Delaware.  He graduated with his VMD from the University of Pennsylvania, where he also completed his internship and surgical residency.  He was a Senior Scientist at Ethicon, Inc., and for the past 20 years has been in private surgical practice.