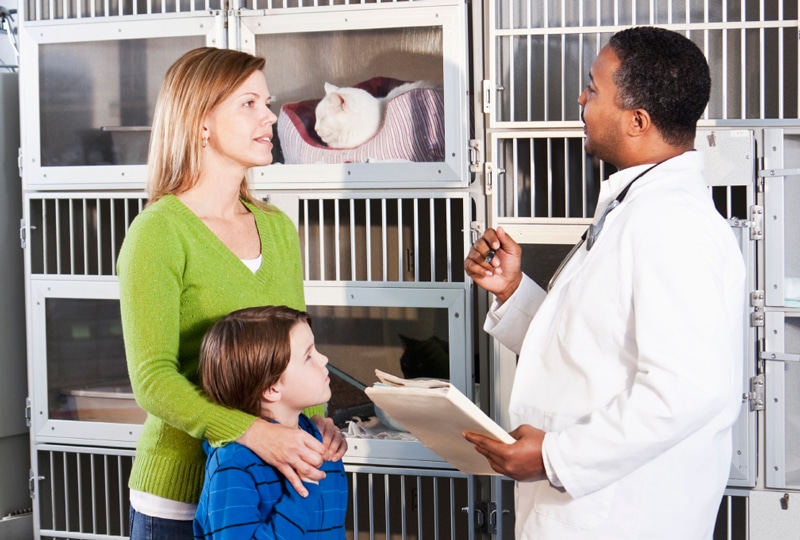 Animal behavior and welfare scientists, veterinarians, and researchers from disciplines, such as physiology, psychology, and ethics have made ardent strides in understanding and improving the lives of animals in zoos, laboratories, shelters, agriculture, and domesticity.

Animal welfare is complex, encompassing practical aspects of housing, nutrition, and care, as well as ethical constructs of right and wrong.1 To effectively address this topic, welfare science must be multidisciplinary and attempt to understand both the objective dimensions of animal health and the subjective lives of captive animals through observation and inference of physiological and behavioral data. The significance of this information is most effectively considered in light of the natural history, environmental conditions, and individual variation to which each animal is inextricably linked.2

Animals have diverse natural histories, with distinctive biological, psychological, and environmental needs that must be addressed and regarded. Taken together, these factors can provide insight into the needs of individual animals, and must be incorporated into the development of appropriate shelter environments. Accurate accrual, interpretation, and dissemination of such data helps to:3,4

In 1959, Russell and Burch conducted research examining humane experimental methods that raised concerns about determining what is, and is not, humane and how to promote humanity without compromising scientific and clinical aims.5 Their work led to the development of the 3 R’s of experimental research:5

In 1965, the Brambell Report was developed in response to investigations into farm animal welfare. The Farm Animal Welfare Council refined the report’s concepts into the Five Freedoms.6 These freedoms are defined as ideal states, as opposed to basic standards:6

1. Freedom from thirst, hunger, and malnutrition

3. Freedom from pain, injury, and disease

5. Freedom from fear and distress

According to the literature, animal welfare can be defined as concerns, intentions, and actions that arise from, and are aligned with, an ethical responsibility to:7-10

There has been some contention with definitions of welfare, attributable mainly to the subjective nature of psychological well-being, and the inherent difficulty of appreciating the lived experience of “an other.” Concepts, such as ability to cope and discerning levels of suffering, are difficult to objectively measure, and individual animals may vary in the extent of environmental control required for well-being. Moreover, subjective experiences and states are not always easily defined or assessed. In this light, it is often suggested that a multifaceted approach of behavioral, physical, psychological, and physiological measures is required for an authentic evaluation of animal welfare.4,7,8,10

Welfare measures are numerous and include physiological, psychological, health, and behavioral components. They are used as indicators of poor quality of life, inclusive of stress, pain, and/or suffering.10,11

Stress becomes a welfare issue when an animal’s inability to cope with the challenges of the shelter environment jeopardizes its health and well-being.10,12

Stress can be measured through the use of biological and psychological markers, such as cortisol, reproductive hormone levels, heart rate, body temperature, and immunological markers.4,13 It can sometimes be mitigated by providing captive animals with some measure of real or perceived control over their environment. Unfortunately, most animals entering the shelter environment experience stress due to the unfamiliarity of surroundings, situation, and social factors of a novel environment.

Suffering has been defined as prolonged or intense negative emotional states, such as pain, fear, anxiety, or frustration, occurring independently or concurrently.14,15 An animal can be in “good health” and still be suffering. Thus, suffering is often differently experienced and expressed across species and individuals.16

A primary goal of welfare is to decrease/alleviate suffering. Marian Dawkins has posited that 2 core questions should be posed relevant to alleviating suffering and increasing welfare: First, can animals’ health be improved? Second, are the animals being provided something they need and/or want?2,13 Need and/or want can be approached by providing animals the ability to perform species-specific behaviors as well as affording animals some measure of choice and control in their environment.

Welfare assessment can be challenging because it is interpretive and relies, in part, on human valuation.16 Thus, it becomes clear that questions about welfare are fundamental, yet difficult to address and resolve.

Animal shelters have made great progress since the 1800s, when their function was primarily to dispose of unwanted animals.17,18 Modern animal shelter veterinarians and staff work to ensure the animals’ physical and psychological health, incorporate welfare innovations, and provide humane care.

Goals and services of shelter veterinary health and welfare practices have expanded to include:17,18

Shelter veterinary medicine yields some challenges distinct from clinical veterinary practice. For example, shelter veterinarians are in the unique position of being required to practice both individual and population medicine; however, the health and welfare of the shelter population takes precedence.19

Impediments to population welfare often stem from the fact that shelters must maximize welfare within a limited environmental space, with limited funding, while still allowing for healthy animal population dynamics and interaction with the public.19 Additionally, stringent regulatory standards for shelter animal care are lacking, which, if coupled with inadequate resources and poor staff training, can further complicate the goals of optimal care and welfare.4,19,20

Other welfare challenges arise from:4,19,20

Shelter veterinary medicine plays an essential role in addressing these challenges by evaluating and maintaining the physiological, behavioral, and psychological health of shelter animals.

Evolutionary history influences the behavior of a given species and leads to species-specific behaviors.2 These motivations persist even when the captive environment prevents animals from performing such behaviors, resulting in frustration for the animal.2 Behavioral considerations include reasons for behavioral displays and the performance of these behaviors. For shelter animals, it must be determined which behaviors cannot be executed, why they cannot be performed, and what effect this has on the animal.4 In other words, how does the animal respond when highly motivated species-specific behaviors are not possible?

Frustrated motivations and lack of control can yield numerous changes in behavior. 5, 22-24

The causes of behavior change must be evaluated with caution, as they may arise from psychological causes, yet often signal an underlying health issue.23 In particular, stereotypic behavior can suggest compromised welfare when related to frustration, inability to cope, and/or brain dysfunction.24,25 However, while stereotypes may be a viable measure of stress in many captive species, not all express these behaviors. It has also been theorized that stereotypic behaviors may serve as an important coping mechanism for shelter animals and it is important to view these behaviors within a more broadly-based assessment of welfare.25-26

Environmental enrichment is an ongoing process that is species, and perhaps individually, variant over time. Variables from the species’ natural history and the captive environment must be carefully evaluated for enrichment implications.20 Enrichment implementation, such as group animal housing, is not without risk for injury, illness, or harm; thus, safety evaluation and monitoring is crucial.4

Enrichment can be divided into 5 categories:27,28

Providing confined animals with some measure of control over their environment by providing them the ability to choose enrichments has been shown to improve welfare:28

Concerns for shelter animal welfare have fostered considerable efforts to improve conditions in shelter management programs. However, budgetary constraints and/or knowledge gaps can limit the extent to which welfare concerns can be met.19

Shelter animal care and management programs designed to produce high levels of welfare should engage in:4,27-29

Shelter veterinarians play an important role in developing and evaluating management and enrichment methods. The needs of each animal should be evaluated, and balanced in accordance with population requirements and enrichment programs tailored to accommodate changing needs over time. In light of this, successful health care and welfare management requires collaboration and communication among shelter veterinarians, staff, behaviorists, trainers, and researchers.4,29

Modern shelters are fulfilling an increasing role in society due to their expertise, outreach, and health management programs. As a whole, their missions focus upon humane care and public protection. However, scientific research, education, and enhanced shelter programs are improving the welfare of shelter animals and contributing to the overall body of knowledge about shelter species, animal behavior, welfare, and companion animals.

Education and public participation in activities raise awareness of the difficulties faced by shelters and shelter animals. It is important to cultivate reverence for these animals, and the educational opportunities and interactions within the shelter and community should incorporate this goal, as it is our duty to ensure the humane care and wellbeing of the animals in our charge.

In addition to concerns regarding health and welfare, shelters have had their share of ethical controversies.

One example is pound seizure—the procurement of animals from pounds/shelters for use in research. Shelters remain a subideal welfare situation for many animals despite welfare and care improvements. Shelters face challenges of overcrowding, and long-term confinement of unadoptable animals, or euthanasia. It has been argued that these unwanted/unclaimed animals should be used to assist “the good of humanity” through research.21

However, a portion of the American public does not approve of the resale of shelter animals for research.21 Increasing public awareness and disapproval of these practices helped lead to the referral of the Pet Safety and Protection Act of 2009 to the House Committee on Agriculture to more strictly regulate procurement practices to help assuage public discontent.21

While society may help determine what is ethically acceptable, organizational efforts, such as those of the American Veterinary Medical Association, Association of Shelter Veterinarians, American Society for the Prevention of Cruelty to Animals, Animal Welfare Institute, Universities Federation for Animal Welfare, and Humane Society of the United States, are important in the development of research and education to inform the public and policy makers to promote responsible practices and management guidelines.

The author is grateful for the intellectual insight of Drs. Sheila Chase and Joseph Barber.

Sherry Loveless is an interdisciplinary scholar, ethologist, and artist whose work focuses on animal welfare and ethical and social responsibility. She is currently affiliated with the Animal Behavior and Conservation Program of Hunter College, City University of New York and the Potomac Institute for Policy Studies in Arlington, Virginia. Ms. Loveless is also the artistic director and managing editor of Synesis: A Journal of Science, Technology, Ethics and Policy and managing editor of Philosophy, Ethics, and Humanities in Medicine. Her specific research interests include feline and equine behavior; animal cognition; animal use and welfare in research, sport, and public life; and human responsibility in these areas. Ms. Loveless’ experience as a lifelong equestrian has provided a hands-on education and living laboratory that afforded insights into animal (and human) behavior and the importance of science and ethics to inform guidelines, policies, and laws to insure animal safety and well-being.