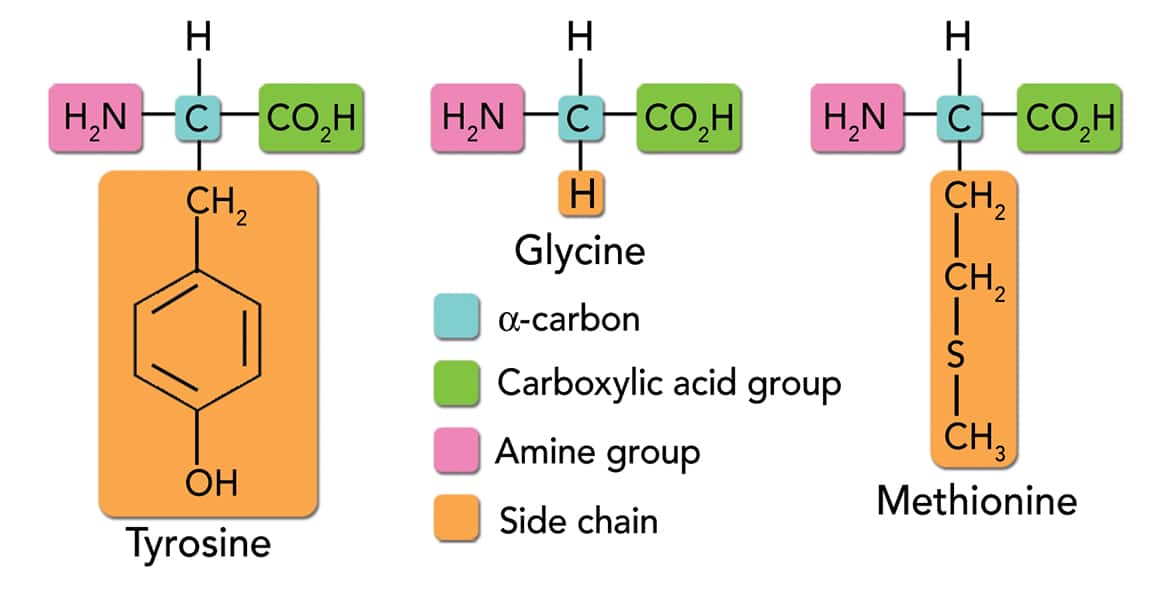 Figure. Basic structure of amino acids: Glycine is the smallest amino acid, with hydrogen its only side-chain. More complex amino acids have longer side-chains, including those with aromatic rings or sulfur, examples of which are shown in the figure.
1
1
Share

Dietary protein is one of 3 primary metabolic fuels of the body that, together with fat and carbohydrates, provides cellular energy. Amino acids extracted from dietary proteins are also used by animals to synthesize the functional proteins required for normal physiologic functions.

Proteins, produced by combining amino acids, are unique energy sources because they contain nitrogen, which can be used to interconvert amino acids or synthesize other nonprotein molecules, such as nucleic acids. Excess nitrogen liberated from protein processing must be eliminated to avoid toxicity.

Dietary amino acids are required for life and influence a number of conditions seen in veterinary patients, such as renal disease, liver failure, and urolithiasis.

Body protein is composed of 20 different amino acids, which are linked together in long chains with peptide bonds. Proteins display complex structures, which serve a number of physiologic and biochemical processes, including:

Animals have amino acid requirements rather than intact protein requirements, which has been demonstrated in studies in which dogs and cats have been sustained on diets containing only purified amino acids in required amounts.

Amino acids are absorbed in the gastrointestinal tract following disruption of peptide bonds by pepsin, trypsin, chymotrypsin, and peptidases. Cells use active transport to obtain amino acids from the plasma and, subsequently, convert them to cell, tissue, or plasma proteins in target tissues.

Amino acids found in tissue proteins contain an amine (nitrogen-containing) group and a carboxylic acid group linked by a carbon, known as the alpha-carbon (Figure). Structures of amino acids differ in their side chains, which are attached to the alpha-carbon. 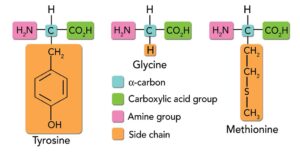 Figure. Basic structure of amino acids: Glycine is the smallest amino acid, with hydrogen its only side-chain. More complex amino acids have longer side-chains, including those with aromatic rings or sulfur, examples of which are shown in the figure. 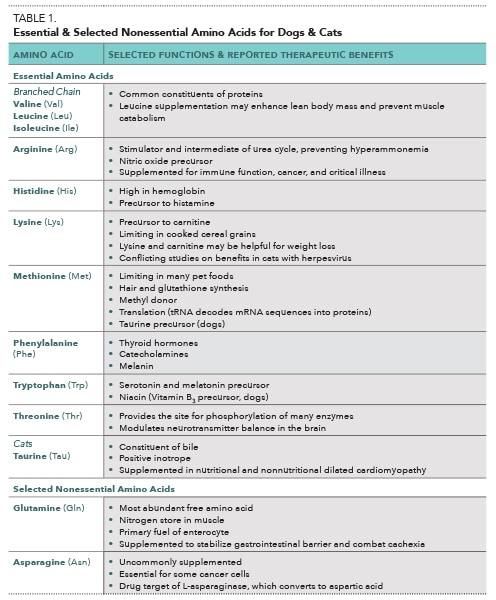 Excess amino acids can be used for fuel and are divided into glucogenic and ketogenic amino acids depending on whether they can be used to produce glucose or acetyl coenzyme A, respectively.

In many pet foods, especially those with lower protein content, taurine is added, but it is only essential in cats because, in dogs, enzymatic conversion of cysteine to taurine is more active. Deficiency most notably causes dilated cardiomyopathy in dogs and cats and central retinal degeneration in cats.3

While some species reduce food intake when fed an amino-acid deficient diet, cats are a notable exception, presumably because their evolutionary prey were never limiting in protein.

Protein and essential amino acids can be derived from animal or plant sources.

Meats refer to striated muscle from mammals and can contain other surrounding tissue, such as fat or skin. Muscle meat contains a large concentration of protein, but substantial amounts can also be found in other products, such as organ tissues.

Most pet foods rely on parts of the animal that are not destined for human consumption, and ingredients listed as a general descriptor, such as chicken or beef, need not contain the whole animal but rather selected parts. For example, poultry or chicken, if listed on a label, refers to the clean combination of flesh and skin with or without accompanying bone, derived from parts or whole carcasses of poultry.1

A meat meal refers to a product that contains similar inclusions as meats but is rendered and dried to contain minimal moisture. Meals are typically slightly higher in protein than meats, and generally provide more calories by weight than fresh meat; therefore, their appearance first on an ingredient list suggests that they may provide the primary source of calories in the food, which may not be the case for meats.

Plant proteins can provide digestible protein and amino acids. Many cereal grains are processed to produce starch, fat, and gluten. Gluten is the protein containing fraction of grains.

Vegetable proteins may be beneficial for reducing nitrogenous waste, with implications for hepatic encephalopathy and urate stones.4

Animal proteins are generally more digestible than plant proteins. However, this is not always the case; for example, corn gluten can have better availability than lamb meal.5 Fish, casein (a dairy protein), and egg are animal proteins that often display the highest digestibility.

Digestibility of animal products depends on the:

Digestibility of protein is both difficult to assess from information found on food labels and to measure because typical methods are not able to separate digestibility by the animal versus that of intestinal bacteria.

Atwater factors are used in human nutrition to predict the amount of energy in a certain mass of food. These factors assume a certain digestibility and reflect the anticipated amount of energy that is actually available after energetic losses in the urine and feces. The value used for many foods consumed by humans is 4 kilocalories (kcal) per gram of protein.2

AAFCO uses a modified factor of 3.5 kcal per gram for commercial pet foods, as it is assumed that extruded pet foods have reduced digestibility.1 Fortunately, most foods contain excess amino acids and crude protein due to the difficulty of precisely measuring protein digestibility.

While gluten free is a common label in human foods, true gluten sensitivity appears to be rare in dogs and cats, but has been documented in certain lines of Irish setters. Adverse effects from long-term gluten exposure in domestic animals have not been documented in scientific studies.

In addition, owners may express concern about plant proteins due to recalls in response to melamine contamination of wheat gluten-containing foods.6

Requirements for dietary amino acids present in protein are well established for various life stages and types of animals: 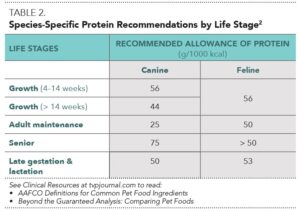 The nutritional needs for exercise and performance in dogs are well established. Less is known about cats as they infrequently perform vigorous exercise in competitive situations.

Dogs utilize adenosine triphosphate and carbohydrate reserves for initial bursts of energy; then rely on fat for endurance.2 Excess protein is used for energy and does not increase body stores. Protein catabolism acts as a reserve of substrates for gluconeogenesis and ketogenesis. Leucine administration, however, may help prevent muscle catabolism.9

Considerations for performance dogs include:

High protein diets are associated with:

Cats prefer a high dietary protein content (130 g/1000 kcal), which is consistent with diets of feral cats and the composition of rodents.10,14,15 Cats do, however, efficiently absorb and utilize dietary carbohydrates in amounts commonly found in pet foods.16 Long-term comparisons of cats fed diets with different concentrations of protein and carbohydrates are not available.

While high protein diets may improve diabetic control or remission,17 there is no association between high carbohydrate diets and obesity, the main risk factor for feline diabetes.18

Many therapeutic diets for lower urinary tract diseases are restricted in dietary protein. The evidence for such an approach varies by condition.

Canine struvite uroliths are almost always a product of infection; protein restriction has been used in canine struvite dissolution diets to reduce urea, a substrate for urease-positive bacteria.19

Feline struvite uroliths include the component ammonia; protein sources contain both phosphorus and nitrogen, which contribute to struvite formation. Therefore, lower protein diets may be associated with reduced sterile struvite risk in cats.20 Struvite crystals, in the absence of uroliths, are rarely an indication for dietary modification.

Calcium oxalate urolith recurrence was historically managed with reduced dietary protein given suggestions that protein promotes calcium excretion. However, higher levels of dietary protein reduced risk in dogs and cats, which may be due to increased water intake, urine output, and phosphorus excretion.20-22

Cystine uroliths form in dogs with a genetic defect in the renal tubules. Protein restriction reduces cysteine, but animals may also have increased loss of other amino acids and carnitine;23 therefore, definitive recommendations are not available.

Urate uroliths are a product of abnormal purine metabolism, and urate urolithiasis is prevented by purine, rather than protein and amino acid, restriction. While the purine concentration of most commercial diets is not reported, therapeutic diets for urate stones generally restrict dietary purine.

Feline lower urinary tract disease is associated with several conditions, and the role of protein is unclear for many of them. However, some authors now recommend moderate to high protein diets (> 75 g/1000 kcal) because they increase water intake, urine production, and urine acidification.24

Blood urea nitrogen (BUN), an unreliable marker of glomerular filtration rate (GFR), is influenced by dietary protein because ammonia is liberated during amino acid processing; then it is converted to BUN, a nontoxic product, in the liver. Urea itself does not contribute to renal disease but rather serves as a marker of uremic toxins.

High protein diets increase BUN in both healthy animals and those affected by kidney disease; therefore, protein restriction for canine and feline renal disease is a well-accepted practice. However, the optimal amount of protein to feed animals with either kidney disease or proteinuria is unknown, and there is no substantial evidence that protein is directly toxic to renal tubules in dogs as it appears to be in humans and rats.25

Protein content of a pet food is correlated with dietary phosphorus concentration, and some proteins contain more phosphorus per unit of protein than others (Table 3). Hyperphosphatemia reduces survival in animals with renal disease and is associated with renal secondary hyperparathyroidism;26,27 therefore, in dogs with experimental kidney disease, diets containing elevated protein, but reduced phosphorus, were as beneficial as those with reduced protein and phosphorus.28 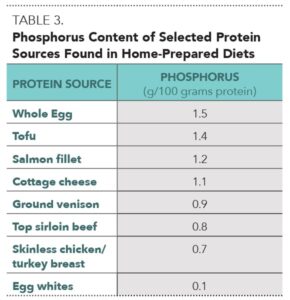 Commercial maintenance foods contain added phosphorus and are, therefore, generally not appropriate for dogs and cats with renal disease.

Home-prepared diets are often used to increase protein, while maintaining reduced phosphorus, when the patient’s condition dictates such an approach.

Additional considerations for feeding pets with renal disease include:

Protein modification is required in the subset of liver disease patients with liver failure characterized by hyperammonemia and hepatic encephalopathy (HE).

Vegetable-based protein may reduce the signs of HE, possibly due to increased small intestinal digestibility and reduced bacterial fermentation in the colon, which reduces the bacterial contribution to blood ammonia levels.4

Food allergy should be distinguished from food intolerance. A true allergy generally occurs to a specific protein or proteins present within the diet, and both meat and plant proteins have been reported to cause hypersensitivity.

Specific nutritional recommendations for renal disease will be discussed in greater detail in an upcoming issue of Today’s Veterinary Practice.

Pet diets should be carefully evaluated for adequacy of amino acids. Fortunately, most commercial diets following AAFCO standards exceed the needs for most dogs and cats, making deficiency unlikely. Home-prepared diets, however, should be evaluated closely for adequacy. Taurine deficiency is the most notable clinical presentation in protein-deficient animals.

The protein content of foods should also be carefully assessed on a caloric basis when diets are evaluated for weight loss, performance, aging, chronic renal disease, HE, and some forms of urolithiasis. A detailed analysis of amino acid requirements may be required in complex conditions or in animals that consume lower amounts of food than expected.