Keeping cats from hunting and ingesting paratenic hosts such as lizards and frogs can limit the transmission of Aelurostrongylus abstrusus.

Dr. Walden is a veterinary parasitologist at the University of Florida College of Veterinary Medicine. Her interests include diagnostic parasitology and introduced, emerging parasite species, many of which are zoonotic and expand their range to new geographic regions through non-native hosts.

Aelurostrongylosis in cats is caused by the metastrongyle nematode, Aelurostrongylus abstrusus. Known as the feline or cat lungworm, this parasite uses gastropods as intermediate hosts, with various vertebrates serving as paratenic hosts and the likely source of infection in cats. It has been described in cats throughout the world and is considered a primary respiratory parasite of cats.1

Many infected cats are asymptomatic, while others exhibit clinical signs ranging from coughing and anorexia to dyspnea and polypnea, depending on the severity of the infection. In some cats, infection with A abstrusus can be fatal. Other respiratory parasites infecting cats include Troglostrongylus brevior, Troglostrongylus subcrenatus, Oslerus rostratus, and Eucoleus aerophilus (syn. Capillaria aerophila).1,2 Diagnosis and differentiation are based on the larval stage (or egg, with E aerophilus) recovered from feces. Lungworm larvae may also occasionally be recovered from bronchoalveolar lavage fluid.

A abstrusus has an indirect life cycle, meaning it cycles between a definitive or final host, the cat, and an intermediate host, the gastropod.3 As with most metastrongyloid nematodes, adult worms are found in the lungs, deep in the terminal respiratory bronchioles, and females lay eggs in the lung parenchyma. The eggs larvate and hatch in spaces often referred to as “nests,” which may appear as small, white nodules.3,4 These nests contain eggs at various stages and first-stage larvae (L1s).

The L1s make their way up the tracheobronchial tree and are swallowed, leaving the feline host in feces. At this point, the life cycle can only continue if the L1s are picked up by susceptible gastropods. Once in the gastropod, the L1 molts to a third-stage larva (L3) and is infective. Since cats rarely ingest gastropods outright, paratenic hosts—including various species of birds, reptiles, amphibians, and some rodents—are thought to be the main source of feline infection.2,4 Once a paratenic host ingests an infective gastropod, the L3s encyst in the tissue of the paratenic host, waiting for ingestion by a definitive feline host.2-4 L1s are typically recovered from infected cat feces 5 to 6 weeks after ingestion,2,3 with larval shedding lasting 2 to 7 months.2

Adult female worms are approximately 10 mm long; males, 5.2 to 6 mm. The L1s in feces are 360 to 390 µm long (FIGURE 1), and infective L3s in gastropods are approximately 520 to 550 µm long.5 Gastropod species known to be intermediate hosts include species of Chondrula, Helicella, Helix, Levantina, Monacha, and Agriolimax.5,6 L3s have been reported in the giant African snail, Lissachatina fulica, in South America,7-9 as well as in an invasive slug, Arion lusitanicus, in Europe.10 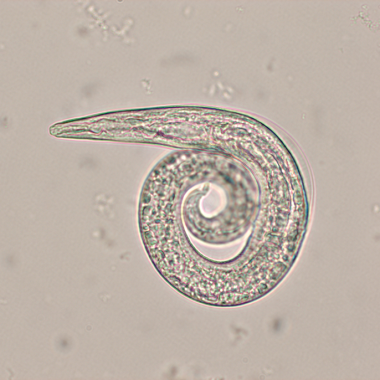 Figure 1. First-stage larva (L1) of Aelurostrongylus abstrusus. Note the S-shape or “kink” in the tail with dorsal spine.

Feline lungworms infect wild and domestic species of cats worldwide.4,11 Gastropods play a major role in the geographic distribution and spread of feline lungworm. It has been found that the changing climate affects the development of A abstrusus in some gastropods, as well as opportunities to continue the life cycle through paratenic host involvement.10 Some intermediate hosts are non-native species, which may allow additional opportunities to facilitate transmission to domestic cats, as most native snails have high habitat specificity and tend to prefer natural habitats, while non-native, or introduced, species are more common in human-modified habitats.12 More contact with humans leads to more contact with cats, or rather the paratenic hosts (e.g., lizards, frogs, snakes) that cats tend to hunt when outside. Infections typically occur in younger cats with access to the outdoors and these paratenic hosts; however, A abstrusus infection is not limited to any particular breed or age group.1,13

Clinical signs and resulting disease depend on the number of parasites present in the lungs, as well as immune status and age of the cat.1,2,13 Many infected cats are asymptomatic, while others have disease that may be mild, moderate, or severe, the last often the result of hundreds of worms.2 Some cats may develop severe pulmonary disease.4

Cats may present with fever, mucopurulent nasal discharge, dyspnea, and varying levels of cough, as well as other respiratory signs such as wheezing and sneezing. Animals may also be anorexic and lethargic.1,2 Sometimes, feline lungworm infections are misdiagnosed as allergic respiratory disease.2 Severe infections may result in bronchopneumonia and death.1,4 Most clinical signs and disease are due to adult worms in the lungs; however, egg and larval production in the nests, larval migration up the tracheobronchial tree, and penetration of the intestine and migration to the lungs after ingestion of L3s can also elicit a granulomatous response, typically within 15 weeks of infection.1,4,13,14

Diagnosis of feline lungworm must take into account history (e.g., outdoor versus indoor, hunting behavior), clinical signs, and the detection of larvae. A combination of diagnostic tests is often required.

The L1s of A abstrusus can be detected in feces approximately 5 to 6 weeks after infection.2 Common methods include direct fecal smear, fecal flotation, and the Baermann method (FIGURE 2). The direct fecal smear is the least sensitive and least reliable. It uses a small amount of feces, and if larvae are not numerous in that particular sample, the infection will be missed.13,14 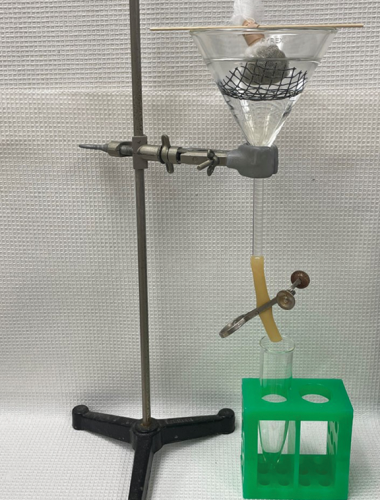 Figure 2. Baermann method set up to extract live larvae from fresh fecal material. A variety of materials can be used instead of a funnel. Larvae leave the fecal material suspended in the top portion of the water and migrate to the neck of the funnel, where they can be collected and examined microscopically.

If fecal flotation is used, the flotation solution must be chosen with care. Some salt solutions may cause larvae to sink, and sugar solutions require longer float times.13 Some studies comparing zinc sulfate (specific gravity, 1.35) and sugar (specific gravity, 1.2) found the saturated zinc sulfate solution more sensitive than sugar.15 Additionally, flotation solutions may dry out larvae, disrupting the cuticle and producing a shriveled appearance.15 This can make diagnosis more difficult.

The Baermann method is the most sensitive; however, it requires a long wait time (at least 24 hours before larval recovery) and depends on recovery of live larvae from fresh feces. Recovered L1s are motile and can be easily seen by microscopy to have a distinct S-shaped kinked tail with a dorsal spine.14,15

One diagnostic technique not commonly used, but effective in some instances, especially when larvae present may no longer be alive (i.e., the sample has been refrigerated or mishandled), is a simple fecal sedimentation. In the author’s experience, this method allows recovery of larvae without disruption of the cuticle.14

Bronchoalveolar lavage fluid may contain L1s and can be processed similarly to feces; however, the number of L1s present may be much smaller than in a fecal sample.15 Cytological examination of Giemsa-stained lung aspirates may also demonstrate L1s.15 False negatives can occur with these methods for many reasons, including testing during the prepatent stage of infection and poor sample quality. It is recommended to test cats with suspected lungworm infection multiple times.16 Depending on history, lifestyle, and clinical signs, inflammatory disorders and additional parasitic infections may also need to be considered, including Dirofilaria immitis and Paragonimus species, as well as rickettsial organisms.2,15

In addition to fecal examination, radiographs can be used; however, visual findings such as alveolar changes and thickening of bronchial walls may depend on the number of worms present and duration of infection.1 Recent studies have investigated the sensitivity and specificity of an enzyme-linked immunosorbent assay as an alternative to fecal examination,16 and polymerase chain reaction assays have been developed to differentiate between the different species of lungworm infecting cats.1

Infection with A abstrusus seems to be common in cats; however, most do not present with clinical disease.13 Many infections in cats are self-limiting, and treatment is generally successful.13 However, it can be difficult as parasites may be in various developmental stages and the lifestyle of the cat must be considered. Cats that hunt/ingest paratenic hosts may be repeatedly infected unless monitored.

Anthelmintic therapies described in numerous case reports and experimental studies have been relatively effective. Treatments have included a 3-day course of fenbendazole, which cleared infections in 3 cats, and 1 to 3 treatments of spot-on imidacloprid 10%/moxidectin 1%, which led to recovery from clinical and radiographic signs in 12 cats 2 to 6 weeks post-treatment.17 Spot-on emodepside 2.1%/praziquantel 8.6% was effective against A abstrusus infections when given twice with 14 days between treatments,18 and spot-on selamectin was similarly effective in 9 of 10 A abstrusus–infected cats.19 Spot-on moxidectin/fluralaner has been shown to help prevent A abstrusus infections in experimentally infected cats.20

Prevention is all about limiting contact with the intermediate or paratenic hosts. Since cats are not likely to ingest snails, keeping them from hunting and ingesting paratenic hosts such as lizards and frogs will limit the transmission of A abstrusus. This can be difficult with outdoor cats but is essential in areas where this parasite is endemic. Veterinarians may want to consider annual screenings specifically for this parasite for cats with a history of feline lungworm infection, or in areas where these infections are more commonly seen.