Approach to Respiratory Distress in Dogs and Cats

Companion animals in respiratory distress are often fragile and can decompensate rapidly. Initial evaluation should be performed rapidly, with minimal stress to the patient.

Managing dogs and cats in respiratory distress is a multifaceted effort that involves stabilizing patients prior to determining a definitive diagnosis. Fortunately, respiratory distress—no matter what the cause—requires somewhat standardized interventions during initial stabilization.

One of the benefits of initial stabilization is that it provides the practitioner time to consider the appropriate diagnostic and subsequent therapeutic approach.

Initial stabilization of a patient in respiratory distress generally involves provision of oxygen supplementation, with or without patient sedation.

Sedation with careful monitoring and, if necessary, intubation and ventilation can be extremely useful in animals that have become anxious due to hypoxemia and/or hypercapnia. In some patients, especially dogs with upper airway obstruction, stabilization may require sedating the animal by administering some form of anesthetic induction agent; then clearing the oral cavity of obstructing material (eg, secretions or foreign material in a choking animal) prior to intubation or tracheostomy.

Animals with upper airway obstruction, such as those with laryngeal paralysis, may become hyperthermic due to the increased work of breathing. Because of the airway obstruction, these animals are unable to effectively pant, resulting in inability to thermoregulate and dissipate heat. As such, cooling hyperthermic patients in respiratory distress is an important component of initial stabilization, and can be accomplished by:

Initial stabilization may also include thoracocentesis, if severe respiratory distress is secondary to pleural space disease, such as pneumothorax or pleural effusion.

Diagnostic approach to a patient in respiratory distress should consider the patient’s signalment and history as well as the broad anatomic differential diagnoses of dyspnea (Table 1).

Clues in the patient’s signalment are common. For example:

History can also be extremely useful; for example:

Examining a patient with respiratory distress should involve:

In general, breathing patterns help narrow the list of differential diagnoses (Table 1). For example, upper airway obstruction is associated with inspiratory dyspnea and an externally audible noise. In contrast, lower airway obstruction tends to be associated with expiratory dyspnea and wheeze, with the wheeze generally just audible on thoracic auscultation with a stethoscope, rather than externally audible.

Extensive diagnostics should not be performed until the patient has been stabilized as much as possible, a brief physical examination has been performed, and the practitioner has localized the disease to the most likely anatomic location (Table 1). Diagnostic tests may subsequently involve: 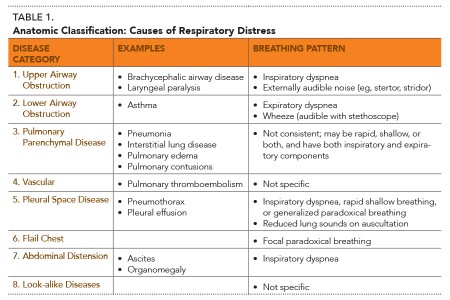 Upper respiratory tract obstruction involves a mechanical or functional obstruction of the upper (large) airways (i.e., the pharynx, larynx, or trachea). Nasal disorders are not considered in this article as the animal should always be able to open its mouth and breathe, preventing the development of dyspnea even if the nasal cavity is obstructed.

Characteristic signs in patients with an upper airway obstruction include inspiratory distress and an externally audible noise associated with breathing (eg, stertor, stridor). Tracheal disease is usually associated with a cough.

Initial stabilization and therapy may involve:

Once the patient is stable, diagnostic tests can be pursued.

Upper airway examination. Examination is performed after preoxygenation under sedation. At its most basic, examination may involve inspection of the oropharynx and larynx with a laryngoscope; in patients with suspected tracheal disease, it may involve tracheobronchoscopy with a flexible bronchoscope or endoscope.

When evaluating laryngeal function as part of an upper airway examination:

Cervical and thoracic radiographs are useful for patients with laryngeal or tracheal disease to detect masses and collapse.

Fluoroscopy is useful for detecting dynamic upper airway collapse that may not be visible on standard radiographs.

Definitive management for upper respiratory tract obstruction is extremely varied, depending on the definitive diagnosis, and beyond the scope of this review.

Sedation for Patients in Respiratory Distress

In dogs, reasonable choices for sedation are butorphanol, acepromazine, or dexmedetomidine, while butorphanol is the drug of choice in cats.

Choice of drug(s) used for sedation/anxiolysis should be based on the individual drug’s properties, and relative risks versus benefits for the patient. For example:

Regardless of the chosen drug, in potentially unstable patients, lower doses are given initially and later increased as needed and tolerated by the patient. 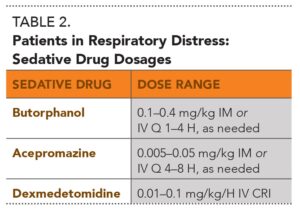 Lower airway obstruction is associated with a narrowed bronchial lumen, which can be caused by varied pathophysiologic processes, including:

In all of these conditions, the bronchial lumen tends to close early during expiration, while it is opened by radial traction from the lungs during inhalation. Therefore, expiratory dyspnea is a hallmark of lower airway obstruction.

Feline asthma and chronic bronchitis in dogs and cats are associated with accumulation of mucus in the lower airways that contributes to obstruction.

Feline asthma. The classic disease in cats that causes lower airway obstruction is feline asthma, the hallmarks of which are eosinophilic airway inflammation, reversible bronchoconstriction and, ultimately, airway remodeling.3

Characteristic signs in an animal with lower airway obstruction usually include expiratory distress and, sometimes, an expiratory grunt or push. These patients may have an expiratory wheeze on thoracic auscultation and, less commonly, an externally audible wheeze.

Bronchodilator therapy often results in rapid improvement in these patients (eg, within 5–15 minutes).

Once the patient is stable, the diagnostic approach usually involves:3 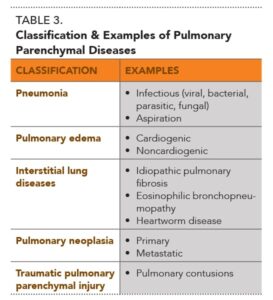 Animals with infectious causes of pulmonary parenchymal disease (eg, pneumonia) may have a fever; however, fever has only been reported in about 1/8 of dogs and ¼ of cats with pneumonia, making it an unreliable abnormality.6

Once the patient is stable, if cardiogenic pulmonary edema is suspected, firstline diagnostics should include:

When it is unclear whether the etiology is primary cardiac versus primary respiratory disease, other diagnostics can be performed, including:

Further diagnostics for interstitial lung disease may include:

If a solitary lung mass is identified close to the chest wall, percutaneous fine needle aspiration or biopsy may be an ideal diagnostic modality. Additionally, surgical removal via lung lobectomy may be both diagnostic and therapeutic.

Causes of PTE are the same as for any thromboembolic disease—essentially abnormalities in Virchow’s triad, which include abnormalities of blood flow (turbulence or stasis), endothelial damage, and hypercoagulability.

With PTE, it is critical to identify and treat the underlying disease if it is not immediately apparent, so as to reduce the risk of further thromboembolic events. Theoretically, any systemic inflammatory state can result in a systemic pro-coagulant state that predisposes the patient to PTE. Table 4 lists diseases and conditions known to predispose veterinary patients to hypercoagulability.8 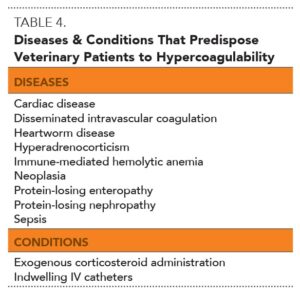 Diagnosis of PTE can be challenging. While thoracic radiographs may be normal, indications of PTE include (Figure): 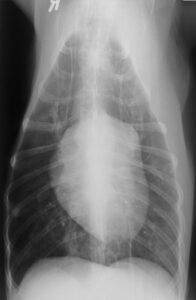 Echocardiography is also a useful diagnostic modality in cases of suspected PTE as it can document pulmonary hypertension that often occurs secondary to PTE; detect right-sided cardiomegaly and main pulmonary artery dilation; and may allow visualization of a thrombus in the main pulmonary artery.

Advanced imaging, such as CT angiography or, less commonly, a ventilation/perfusion lung scan with nuclear scintigraphy, are required to confirm the diagnosis.8,9

Stabilization involves oxygen supplementation, and treatment requires anticoagulant drugs as well as addressing the underlying disease. Therapies that can be used include:

Animals with pleural space disease may have:

Thoracic imaging is the mainstay of diagnosis. In unstable patients, point-of-care ultrasound is particularly useful to confirm the presence of pleural fluid or air.10 Radiographs can also confirm diagnosis but ideally, in unstable patients, thoracocentesis (see Stabilization & Management) should be performed after ultrasound and prior to radiographs. If ultrasound is not available, thoracocentesis should be performed based on clinical suspicion, in order to stabilize the patient prior to obtaining radiographs.

In patients with pleural effusion or pneumothorax, therapeutic thoracocentesis should result in immediate improvement. Pleural fluid can then be submitted for analysis/cytology and, in cases of pyothorax, bacterial culture (both aerobic and anaerobic culture).

Flail chest refers to destabilization of a portion of the rib cage, which occurs if there are rib fractures in 2 different locations (proximal and distal) on the same rib(s). This condition often affects multiple ribs (at least 2 consecutive ribs), creating a flail segment.11

Concurrent injuries, such as pulmonary contusions and pneumothorax, are common in dogs with flail chest and are generally the cause of respiratory compromise, rather than the flail chest itself.

Flail chest is usually visually obvious on examination, but radiographs are indicated to confirm the nature of the rib fractures and allow assessment of severity of the underlying pulmonary parenchymal damage. Rib fractures are extremely painful and may cause rapid, shallow breathing because big chest excursions cause more pain than little breaths.

Management of flail chest is often supportive; the following should be provided:

Additional supportive care may include:

Patients with diaphragmatic hernia usually have a history of trauma; either acute, or at some time in the past. Surgery via a ventral midline laparotomy to replace the abdominal contents in the abdomen and repair the torn diaphragm is indicated as soon as possible.

Significant abdominal enlargement (Table 5) can result in respiratory distress because it impedes thoracic expansion during inspiration. Dyspnea is rarely a presenting sign, but tachypnea is common in these patients. 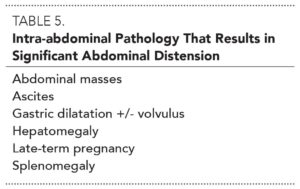 Respiratory distress due to abdominal distension is usually visually obvious. Abdominal palpation and imaging (ie, abdominal radiographs and/or ultrasound) can help determine the underlying cause.

Supplemental oxygen may provide some relief, but treatment should be aimed at reducing the degree of abdominal enlargement. Reducing the abdominal distension may be straightforward, such as with abdominocentesis in the case of ascites, or more complicated. For example, in the case of severe hepatosplenomegaly in dogs with immune-mediated hemolytic anemia, nothing can be immediately done other than treating the underlying cause and giving the patient time to recover.

These diseases or conditions can generally be identified based on a complete history, physical examination, and screening laboratory tests. Thoracic radiographs can help definitively rule out underlying respiratory disease.

Since the increased respiratory effort associated with these conditions is not usually oxygen responsive, management is aimed at treating the underlying disease.

The mainstays of management of a patient in respiratory distress are: