Noise and Storm Phobias and Anxiety in Dogs

Fear is a normal and adaptive response. In animals, the subjective states of anxiety and fear (see Differentiating Between Anxiety & Fear) are presumed to exist when the pet exhibits behaviors, such as avoidance, whining, crying, trembling, shaking, or panting.

The stress response, in the short term, is healthy and necessary. The dog is alert and ready to take action in a given situation, such as retreat from a scary sound. However, when the response is prolonged—for example, fear occurring throughout storm season—physical and emotional pathologic conditions may ensue.

Most fears are learned and can be unlearned with gradual exposure, counter conditioning, and other strategies. In contrast, phobias are learned fear reactions that are:

How is a normal fear differentiated from a phobia? Experiencing fear when lightning strikes outside is normal, and most people startle or jump in response. This type of response is normal in animals as well. However, if anxiety or fear manifests every time a dark cloud appears in the sky, the leaves rustle, or even at a certain time of the day, these reactions are more indicative of a phobia.

Anxiety is defined as a state of apprehension, uncertainty, and fear resulting from the anticipation of a realistic or fantasized threatening event or situation, often impairing physical and psychological functioning.3 Fear is defined as a distressing emotion aroused by impending danger, evil, pain, etc, whether the threat is real or imagined.4

Possible causes of fears and phobias include:

Fears and phobias associated with noise can be seen as early as 9 weeks of age,5 but noise phobias usually develop over an extended period of time.

The most common examples of noise fear or phobia are thunder and fireworks; an estimated 49% of dogs show a significant fear response to firework noise.6 More subtle examples include noise from dishwashers, ceiling fans, plastic garbage bags, and home alarms.

Dogs diagnosed with storm phobia can react with anxiety or fear to wind, rain, thunder, lightning, and other associated stimuli, including barometric pressure changes, the “smell of rain,” static electricity, and even time of day. One study demonstrated a 207% increase in salivary cortisol levels after exposure to simulated sounds of a thunderstorm.7

Flooding: Can It Drown Fears?

Flooding is the process of deliberately exposing an anxious dog to a “scary” stimulus at maximum intensity until the dog stops reacting in an anxious manner. While the goal may be to habituate the dog to the stimulus and gradually lessen its response through repeated exposure,8 flooding may actually increase anxiety.Once a flooding session starts, it must be continued until the fear response ceases, no matter how long it takes. The dangers involved include the animal directly harming itself, harming the environment, or experiencing a stress response of such intensity that its health is compromised. An end result may be learned helplessness—the dog realizes that there is no escape from the stimulus.

When faced with these stimuli, dogs may hide or stay near the owner, tremble and shake, or drool profusely. In worst-case scenarios, panicked dogs may try to “escape” from crates, rooms, houses, and fences, severely injuring themselves as well as causing extensive damage both inside and outside the home.

An inciting cause may exist, such as a very severe storm or lightning strike. In patients where an event is not thought to be the cause, identifying another cause is, at best, a guess. This is an area that requires further investigation; for example, do certain dogs have a genetic predisposition to anxiety that increases the chance they will develop a fear or phobia?

Depending on presentation, treatment of storm phobia may be straightforward. Such solutions include:

Given the complex nature of storm phobia, however, treatment is challenging and requires intensive follow-up in some dogs. The dog may be responding to impossible-to-control stimuli, such as changes in barometric pressure, ionization, and lightning, making desensitization difficult.

If the dog responds with fear to the sound of rain or thunder, desensitization and counterconditioning (DS&CC) can be attempted using a CD of storm noises.

The goal is to keep the dog calm and relaxed during the session. However, the CD should NOT be played as background noise, playing loudly, because this may worsen the anxiety due to the “flooding” effect or technique (see Flooding: Can It Drown Fears).

While DS&CC can be used for other noises, such as fireworks, it is often ineffective for treatment of storm phobia because sound alone cannot recreate the weather event completely.

Classical conditioning (CC) can work very well. With CC, the fear-triggering stimulus (dark sky, rain, thunder) is paired with a favorite treat and/or toy—whether or not the pet is entirely relaxed. This creates a positive association, such as dark sky = cheese or thunder = hot dogs. These “storm parties” allow the pet to look forward to something very special when the stimulus develops rather than reacting in fear.

Ideally, CC should begin when the dog is a puppy, learning at a young age that the outcome of the storm is something positive. Anxiety stems from uncertainty—by ensuring the outcome early on, the puppy will learn to expect food, a special toy, or other positive item or experience during a storm, with no reason to expect frightening stimuli.

Under NO circumstances should punishment be used when an owner is helping his or her dog overcome noise or storm phobias, especially if there has been physical damage that occurred while the owner was away. Punishment only serves to increase the pet’s anxiety and fear. Make the owner aware that keeping the pet calm and relaxed is a requisite part of treatment.

Some dogs respond well to the various capes and wraps available, including the Storm Defender Cape (stormdefender.com), Anxiety Wrap (anxietywrap.com), and Thundershirt (thundershirt.com).

In a study that evaluated the efficacy of the Storm Defender Cape (Figure), which reportedly has anti-static properties, 70% of owners reported some degree of improvement in their storm phobic dogs after the fourth use of the cape.9

The Anxiety Wrap and Thundershirt are designed to apply gentle pressure to the dog’s torso, resulting in fear reduction by maintaining “swaddling” pressure and applying acupressure. In a recent study, after 5 uses of the Anxiety Wrap, 89% of owners reported that it was at least partially effective in treating their dogs’ thunderstorm phobias. This percentage was significantly higher than those who rated it as noneffective.10

Since many owners are at work when storms hit, it is my experience that such capes/wraps can be left on during the day—indoors—without negative effects. 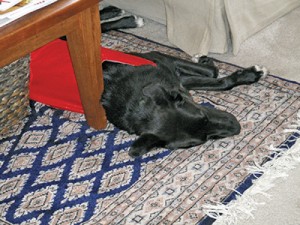 Figure. Benny the dog is relaxing in a Storm Defender Cape rather than hiding in the closet during thunder storms.

Pheromone products can help dogs with noise and storm anxiety. Adaptil (ceva.us) contains a synthetic analogue of dog appeasing pheromone (DAP), which reportedly helps provide reassurance and comfort to puppies and dogs of all ages. One study showed that desensitization (using a sound CD) in combination with DAP helped dogs handle their fear of fireworks.11

Adaptil is available in 3 forms:

The diffuser and collar are effective for 3 to 4 weeks and should be used for the duration of storm season for maximum response.

A daily maintenance medication can be given to decrease the overall anxiety of a dog with storm phobia, including:

Treatment can be instituted approximately a month before “storm season” and, if appropriate, the dog may be slowly weaned off the medication after the season is over.

For panic that many dogs experience during storms, a fast-acting benzodiazepine (ie, alprazolam, diazepam, lorazepam, clonazepam) can be given 30 to 60 minutes before the storm starts. Since owners cannot always be present during a storm, the benzodiazepine can be administered prior to the owner leaving the home if a storm is predicted. Additional doses can be administered as needed.

If the storm-phobic dog is an “only” dog or can be isolated from housemates, owners can provide a midday dose of the benzodiazepine within a “meatball” inside an automatic feeder—set to open in time to address any afternoon storms.

Trazodone, a serotonin antagonist reuptake inhibitor, can be effective used alone or in combination with either a SSRI, TCA, or benzodiazepine.12 Combination therapy between trazodone and a SSRI or TCA must be monitored carefully for serotonin syndrome, an unlikely (at recommended doses) but serious complication.

One study has shown that the combination of the botanical extracts Magnolia officinalis and Phellodendron amurense in Harmonease Chewable Tablets (harmoneasevet.com) is effective in dogs for the management of stress-related behaviors seen in storm phobia.13

Additional information regarding medications and dosages for behavior issues can be found in: