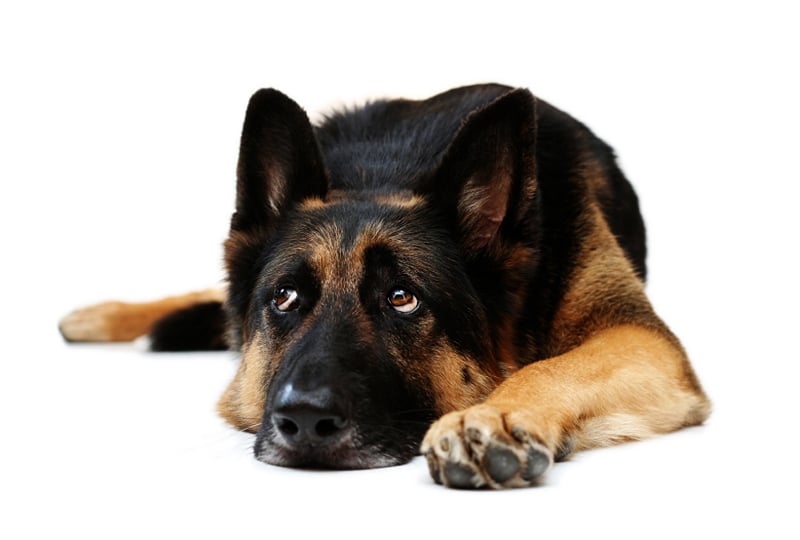 Maya is a young adult German shepherd mix with a fulfilling life. Along with Sally, her single and self-employed “parent,” Maya hikes daily and spends much of her time resting on the couch while Sally works at the computer.

When Maya is left alone, however, the situation shifts from peace to pandemonium. During a recent weekday Sally was away for 4 hours; she returned to her 1-bedroom apartment to find the refrigerator pulled open and its contents—including liquids and a stockpile of eggs—entirely emptied onto the floor. And Maya was nowhere to be found.

A broken screen led Sally to the neighbor’s house—and Maya. Several hours earlier, the neighbor had found Maya walking down the street. After returning home with Sally, Maya sat in a remote corner, head down, wearing a pitiful, conscience-stricken expression.

Dogs are social animals and, by nature, prefer the company of people or animals to solitude. Even dogs that appear independent, perhaps spending hours napping in a distant bedroom, base their independence on the fact that owners are not far away.

As many of us know, there is a world of difference between dogs who wander to a quiet spot in the house and those who are left alone for hours as owners go to work, run errands, or participate in social activities. Some dogs seem deeply indifferent about human comings and goings (once their gastric and excretory needs have been met); others, while not entirely indifferent, resign themselves to the inevitable and sleep through the day. There is a problem, though, when dogs left alone are significantly distressed.

Separation anxiety is the clinical diagnosis applied to a variety of behaviorial issues that have one thing in common: the dog is “left behind” by its human. It can present in several different ways, with a range of intensities.

However, unless “evidence” is left behind, owners might be completely unaware of their pets’ distress. Therefore, understanding what dogs do when they are alone is important: at least 50% of dogs, and probably more, will exhibit some aspect of separation distress in their lifetimes.1

Signalment of affected dogs is variable, but many dogs with separation anxiety share similar characteristics:2

Young puppies do exhibit distress in their new homes, often the first time they are separated from littermates or mothers, but are not considered to have clinical separation anxiety unless distress persists beyond early puppyhood.

Diagnosis confirmation usually requires videotaping, or even audiotaping, the dog when the owner is absent. A dog with separation anxiety will chew, vocalize, pace, or eliminate only in the owner’s absence, typically immediately after, or within 30 minutes of, the owner’s departure.

In addition, the dog will appear distressed rather than “bored” or playful; distress will typically be accompanied by pacing, whining, panting, and restlessness.

Confinement distress is common in dogs with separation anxiety, but may be a stand-alone diagnosis for dogs that panic when faced with a barrier (crate, gate, or closed door). In some cases, discontinuing crate use can resolve the problem.

Incomplete house-training can be confused with anxiety-related inappropriate elimination, especially in young dogs or newly-adopted adult dogs. When dogs urinate or defecate due to separation anxiety, it typically happens soon after the owner leaves. In addition, elimination must occur in the owner’s absence to be attributed to separation anxiety. Keep in mind, though, that some (clever) dogs will eliminate in the owner’s absence to avoid punishment.

Medical illness should always be considered when a dog presents with a behavior issue, particularly those that have appeared acutely. Urinary tract, gastrointestinal, or other physiologic disease and seizures (with associated elimination), and cognitive dysfunction syndrome (in senior dogs) are some illnesses that can mimic separation anxiety.

Play-related chewing is typically not limited to exit points or windows, but can be confused with separation anxiety when the anxious dog chews/rearranges the owner’s personal items. Video can help distinguish play from distress.

Thunderstorm/environmental fear and phobia can present with similar clinical signs as separation anxiety but, by definition, this distress is associated specifically with storms or loud noises. If the dog has been conditioned to fear stimuli associated with thunder and lightning, such as wind or light rain, diagnosis may be more difficult.

Vocalization can be triggered by environmental sounds, such as barking of neighbor dogs, garbage trucks, children’s voices, and a clanging mail slot. This barking may generate complaints from neighbors. Anxiety-related barking or howling is more persistent.

In addition to the high level of stress it creates in affected dogs, separation anxiety can have a significant impact on the owner’s life. Owners may opt to often stay at home—7 days a week—to avoid unwanted behavior. The fallout from separation anxiety, such as destuctiveness, may lead to relinquishment or euthanasia. Treatment, therefore, should be aggressive but planned with caution to prevent any increase in the dog’s anxiety.

1. Set the Dog Up for Success

During behavior and environmental modification, if possible, have the owner make arrangements to avoid leaving the dog home alone. Owners may take their dogs to work; arrange for day care; or leave them with a neighbor, relative, or friends.

While crating may seem to be an easy solution for elimination and destructiveness, in most cases it is not recommended because the dog may attempt to escape from the crate, which can lead to severe self-injury. Use of a crate may ultimately be possible if introduced slowly while the owners are home, but first-tier use of a crate for an inexperienced and anxious dog should be avoided.

If the dog is barrier-anxious and digging, chewing, or scratching its way through distress:

Dogs with separation anxiety are stressed and often traumatized, with an impaired ability to learn new tasks. While behavior modification can be effective in treatment of separation anxiety, anxiolytic drug therapy can facilitate treatment and, in many cases, reduce anxiety more than training or management changes alone. Drug therapy is commonly used to assist with behavior modification; it is both humane and helpful.

Alternatively, other selective serotonin reuptake-inhibitors (SSRIs), such as sertraline or paroxetine, can be used.

Duration of therapy: Suggested duration for behavior medication is 4 to 6 months or at least 2 months past resolution (or satisfactory improvement) of separation anxiety. Some dogs with separation-related anxiety and underlying generalized anxiety may require lifelong treatment (although uncommon), while others may need to resume pharmacotherapy in the future.

Cessation of therapy: Drug therapy should be tapered conservatively (not more than 25% reduction per 1 to 2 weeks); if separation-related behaviors return, the lowest effective dose of the daily drug can be maintained longer-term.

Monitoring: Annual blood and urine analyses, or semiannual for senior dogs, are recommended in cases of long-term drug therapy.

4. Track Progress with Journals and Videotapes

A baseline for panting, pacing, urination or defecation, whining or barking, and digging/chewing—as well as their timing and intensity—is needed to determine whether treatment is working.

Dogs that cannot adapt to being separated when the owners are home may be less likely to tolerate the owners’ actual departures.

Remember, it is helpful if the dog participates in determining its safe place—a location the dog itself chooses often (eg, owner’s bedroom).

Food is a valuable resource for dogs and can help occupy a distressed dog for a good bit of time. Severely anxious dogs typically ignore food toys, but the toy’s usefulness can be increased by:

6. Habituate to Cues of Departure

Desensitization can be helpful for dogs that become reactive at the moment of departure—when owners walk to the door, open it, and walk out.

In addition to helping the dog disassociate departure cues from actual departures, it is also helpful to change things up, including having the owner leave through a different door, put a coat on in the garage, or park down the street.

Once the dog has responded well to simulated departures and changes in departure cues, owners can begin working on desensitization to actual departures.

If desensitization-to-departure techniques are performed too soon or without regard for the dog’s reactions, they can backfire by sensitizing the dog and increasing its distress.

To decrease the impact of owner departures, owners should not change noise levels (radio, television), lights, or gates when leaving. This includes minimizing owner–dog interactions prior to the owner leaving and then returning. A white noise machine can help muffle outside noises and provide background sound rather than silence. In addition to, or instead of, “white noise,” classical music or talk radio can be provided.

Counsel owners to avoid punishing the dog for anxiety-related behavior. By definition, punishment is unpleasant or aversive. Whether the dog is chewing, digging, inappropriately eliminating, barking, panting, or pacing, all such behaviors are manifestations of distress.

If the owner’s arrival home is associated with punishment, or the owner suddenly opens the door to shout at or otherwise attempt to discipline the dog, anxiety can worsen. The guilty look described by many owners indicates that classical conditioning has occurred: the dog now associates the presence of urine, feces, or destroyed items with the owner’s arrival (and punishment).

Typically, the behavior will recur the next time the owner leaves. Thus, reprimanding the dog for bad behavior hours after the behavior takes place does nothing to prevent the behavior from recurring in the future. 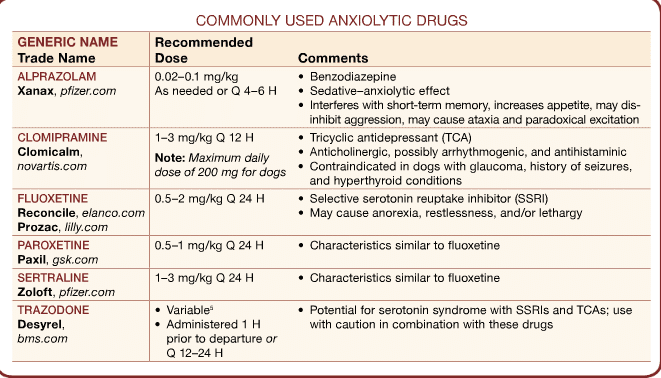 The case presentation at the beginning of the article left off with an anxious Maya and frustrated owner (Sally). However, implementation of several treatment modalities improved both Maya and Sally’s quality of life.