Breed-Specific Respiratory Disease In Dogs: From Bulldogs To Terriers 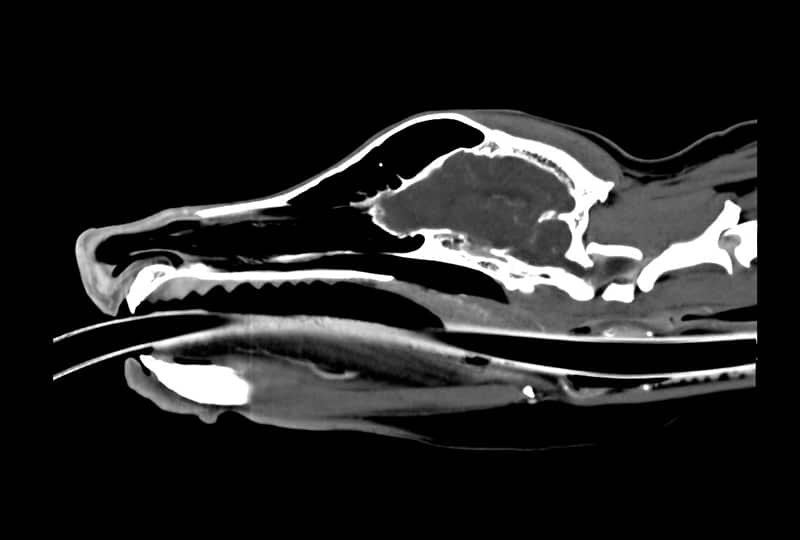 This article focuses on respiratory conditions that are overrepresented in specific dog breeds. Localizing the source of disease to the respiratory system is essential for developing an appropriate diagnostic plan.1

Although the following conditions are common, keep an open mind, evaluate each patient individually, and avoid tunnel vision.

Heat stress, which leads to panting in dogs, is associated with an increased inspiratory flow rate. Simple panting and respiratory distress can be challenging to differentiate.

Upper airway obstruction is a common, but occasionally under recognized, source of respiratory distress.1

Specific upper airway diseases that result in airway obstruction include:

All bulldogs have some component of BOAS. While this article focuses on English bulldogs, many other breeds, including French bulldogs, pugs, and Pekingese, also are affected by BOAS. Table 1 lists clinical signs associated with this syndrome; Figures 1 and 2—sagittal computed tomography (CT) images of the head—compare the upper airway conformation of a brachycephalic dog with that of a mesocephalic dog with normal skull anatomy.

FIGURE 2. Sagittal CT image of the head of a mesocephalic dog; note that the dog is intubated. Compare this dog to the dog in Figure 1 and note the longer nose and lack of intrinsic airway obstruction.

Management of BOAS in bulldogs includes:

Response to surgical intervention, such as arytenoid lateralization, in treated terriers has been minimal to moderate, with less improvement seen than normally appreciated in larger dogs. Additionally, laryngeal collapse may persist, and may continue to cause airway obstruction. Because some dogs are asymptomatic, anesthesia should be performed with caution in this breed, with the dog carefully intubated in case it has a smaller than normal laryngeal lumen.

While Norwich terriers are somewhat uncommon dogs, breeders are uniquely familiar with these respiratory conditions and expect the same level of knowledge from their veterinarians. 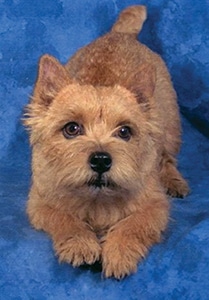 Labrador Retriever
As Labrador retrievers age, the syndrome of laryngeal paralysis is more commonly seen, which is also common in other large and giant breed dogs. Recent work has been transformative in recognizing this syndrome as part of the newly termed GOLPP (geriatric-onset laryngeal paralysis polyneuropathy syndrome).7

Lar par is considered a slowly progressive condition, although some dogs may present in respiratory crisis associated with excessive heat exposure and/or exercise.

While some dogs may be managed adequately for several years by rest (minimizing exercise) and limiting exposure to warm temperatures, surgical palliation via unilateral arytenoid lateralization provides more definitive therapy.8 The number of dogs that ultimately require surgery for control of clinical signs is unclear.

Postoperatively, the risk for pneumonia ranges from 10% to 20%; limiting excessive sedation during the immediate postoperative period may reduce this risk. Most dogs recover quickly from this surgery, but care is required during the first few weeks at home in order to limit potential risks for aspiration. Specifically, advise owners to monitor their dogs during feeding times and consider hand-feeding meatballs for several days.

GOLPP is an important concept during management and treatment due to the potential for postsurgical aspiration and because, in some dogs, other signs of neuropathy gradually progress over subsequent months.

To Swim or Not to Swim

Clinicians are divided with regard to whether dogs should be allowed to swim after arytenoid lateralization surgery (for laryngeal paralysis) due to the increased risk of aspiration after surgery. However, swimming is a passion for many retrievers, often making this an individual owner decision.

Historically, tracheal collapse has been divided into cervical and intrathoracic collapse.

In practice, clinical suspicion is typically adequate to initiate treatment in affected patients; however, if a patient does not respond to medical therapy, further testing is advisable. Clinical evaluation includes neck and chest radiography, which is useful but relatively insensitive. To confirm collapse and/or assess disease severity, fluoroscopy or tracheobronchoscopy (gold standard for diagnosis) is recommended.

Tracheal diameter is more dynamic than initially believed; a recent report documented an up to 24% change in diameter of the normal trachea between inspiration and expiration.11

Treatment of tracheal collapse is outlined in Table 2. As an overview: 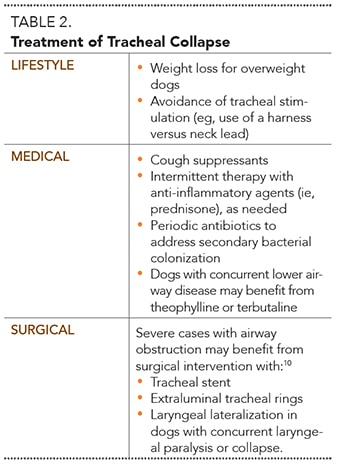 Siberian huskies are overrepresented with allergic (eosinophilic) airway disease, also known as eosinophilic bronchopneumopathy (EBP), which is characterized by cough and exercise intolerance. Circulating eosinophilia is observed in more than 50% of dogs with EBP, and radiographs document a bronchial pattern11 and air trapping/hyperinflation.

Diagnosis should be based on thoracic radiographic findings (Figure 4) and confirmed by collection and interpretation of airway cytologic samples. Cytologically, the majority of nucleated cells are eosinophils, often in the range of 75% to 80%. Although EBP is usually idiopathic in origin, it may be triggered by parasitic diseases (eg, lungworm, heartworm); thus, careful evaluation for parasitic triggers is advised, especially in areas endemic for specific pathogens.15 Serum allergy testing has been minimally explored in dogs, but could be considered for those refractory to treatment.

Prednisone is used for treatment of EBP, tapered to the lowest possible dose. Oral prednisone is typically dosed at 1 to 2 mg/kg Q 24 H to start, and many dogs are well controlled on 0.25 mg/kg Q 24 H or even every other day. In some dogs, inhaled glucocorticoids may be useful. If a trigger is found, and can be avoided, prednisone can be discontinued in some dogs. 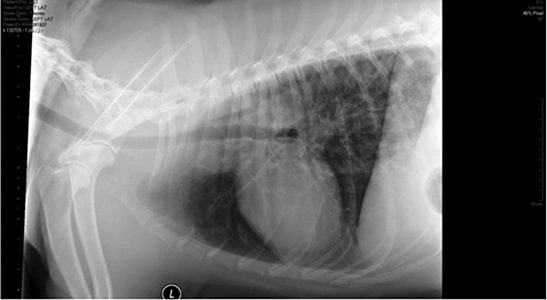 Northern Breeds
Northern breeds, such as Siberian huskies and Alaskan malamutes, are overrepresented with spontaneous pneumothorax, which develops from a pulmonary bulla or bleb. It is not clear if this is related to airway eosinophilia, although most biopsies do not show evidence of tissue infiltration with eosinophils.

In all cases, carefully assess an individual dog’s history and physical and radiographic examinations to help guide decision making.

The following diagnostic findings are associated with pulmonary fibrosis in dogs:

Diagnosis of pulmonary fibrosis in dogs requires a degree of suspicion.

Selective breeding of dogs for unique traits has led to an increased frequency of specific diseases in certain breeds. Some conditions are directly related to conformation, such as those in bulldogs, while others are more likely reflective of genetic susceptibility and possibly a smaller gene pool. While all dogs should be individually evaluated, it is helpful to be aware of breed characteristics that may predispose a patient to particular diseases.

Avoid “wake up and make plan,” especially for patients with compromised upper airways, by combining diagnostic testing that requires anesthesia or sedation with surgical or other palliative therapy.